Data missing is an common issue in seismic data, and many methods have been proposed to solve it. In this paper, we present the low-tubal-rank tensor model and a novel tensor completion algorithm to recover 3D seismic data. This is a fast iterative algorithm, called Tubal-Alt-Min which completes our 3D seismic data by exploiting the low-tubal-rank property expressed as the product of two much smaller tensors. TubalAlt-Min alternates between estimating those two tensor using least squares minimization. We evaluate its reconstruction performance both on synthetic seismic data and land data survey. The experimental results show that compared with the tensor nuclear norm minimization algorithm, Tubal-Alt-Min improves the reconstruction error by orders of magnitude. 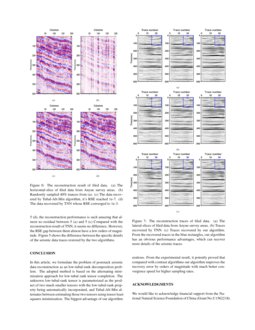 Seismic data quality is vital to various geophysical processing. However, due to the financial and physical constraints, the real seismic survey data are usually incomplete. Seismic data reconstruction is a complex problem, and a large number of researchers have devoted themselves to the research of this field. Consequently, many approaches have been proposed to handle this problem. From the point of view of data organization, these methods can be divided into two categories.

The low dimensional based methods, such as transform-based methods which utilize the properties of the seismic trace in an auxiliary domain Hennenfent et al. (2010). Liner prediction theory use the predictability of the signal in the f‐x or t‐x domain Naghizadeh and Sacchi (2007). And methods which exploit the low-rank nature of seismic data embedded in Hankel matrices Oropeza and Sacchi (2011).

In this paper, we focus on a new seismic data reconstruction algorithm which based on low-tubal-rank tensor decomposition model possesses extremely high precision seismic data recovery performance. Because of the high redundancy or coherence between one seismic trace to the others Ely et al. (2015a), we assume that the fulled sampled seismic volume has low-tubal-rank property in the tSVD domain. Therefore, we can solve the seismic tensor completion problem through an alternating minimization algorithm for low-tubal-rank tensor completion (Tubal-Alt-Min) Liu et al. (2016a, b). We have evaluated the performance of this approach on both synthetic and field seismic data.

The data in seismic survey is a natural high-dimensional tensor, such as the 3D poststack seismic data which consists of one time or frequency dimension and two spatial dimensions corresponding to xline and inline directions.

From what we have stated above, we know that seismic data comprises many traces that provide a spatio-temporal sampling of the reflected wavefield. However, caused by various factors, such lost many important informations. Such as the exist of reservoir, residential or any other obstacle in the seismic data acquisition areas will lead to under-sampled seismic record. The missing traces will complicate certain data processing steps such as the prediction accuracy of underground reservoirs. Hence, the completion step in seismic data processing is of grate significance.

In this paper, we explored the relationship between low-tubal-rank and under-sampled rate firstly, and found that low-tubal property is positively correlated with the sampling rate. Figure 1 shows the detail experiment result. Base on this work, we as-

sume that the full sampled seismic data volume has low-tubal-rank property and under-sampled traces will increase the tubal rank. Therefore, the poststack 3D seismic data reconstruction can be tackled with tensor completion tools that using the low tubal rank property. The statement above transform to mathematical representation is that T∈Rm×n×k is a 3D seismic data with tubal-rank equal to r. Then, by observing a set Ω⊂Rm×n×k of T’s elements, we get the under-sampled seismic data TΩ. Then, our aim is to recover T from TΩ. The tensor reconstruction problem can be formulated as following

Here, PΩ(⋅) denote the projection of a tensor onto the observed set Ω, TΩ=PΩ(T). The Tubal-Alt-Min algorithm proposed by Liu recently, which can complete the low tubal rank tensor with very high currency in several iterations is a perfect approach to solve this problem.

In the Tubal-Alt-Min algorithm, the target 3D seismic volume ˆT∈Rm×n×k can be decomposed as ˆT=X∗Y, X∈Rm×r×k, Y∈Rr×n×k, and r is the target tubal-rank. With this decomposition, the problem (1) reduces to

This cost function can be solved by the alternating minimization algorithm for low tubal rank tensor completion designed by Liu. The main algorithm steps are showing as Alg 1.

The key problem of Alg. 1 is the tensor least square minimization, which was solved by the providing methods in Liu’s paper. The main ideal is to decompose (2) into n separate standard least squares minimization problem in the frequency domain. Then, we just need to solve a least square problem like the following form each step:

To evaluate the performance of the algorithm we adopted, two commonly used evaluation criteria in seismic data completion filed have been used for comparison - the reconstruction error and the convergence speed.

In order to have an intuitive performance comparison, we compared with two other seismic data volume completion algorithm. The Parallel matrix factorization algorithm (PMF) Gao et al. (2015) and the tensor singular value decomposition based algorithm, also called tensor nuclear norm algorithm (TNN) Ely et al. (2015b) for seismic reconstruction. We applied those algorithm both on synthetic and real seismic data, the following subsections will demonstrate the detail performance comparison.

We use a Ricker wavelet with central frequency of 40 Hz to generate a simple 3D seismic model with two dipping planes. The seismic data corresponds to a spatial tensor of size 64×64×256, 256 time samples with the time sampling rate of 1 ms and 64 corresponding to inline and xline direction. Then, through tSVD decomposition we get U, S, and V. According to the decomposition result, we choose the first 2 tubes of S, and make other tubes elements equate to zeros, form a new tensor ˆS. Then we get the tensor ˆT=U∗ˆS∗V which tubal-rank is 2.

Firstly, we apply Algorithm 1 to decompose the low-tuabl-rank tensor of our data set at different sampling rate vary from 5% to 95% and set the tubal-rank equate to 2. Using these decompositions, we generate our reconstructed data and compare the error between the low-tubal-rank reconstruction and full sampled data. Applying two other algorithm we stated above to reconstruct the data at the same condition. Because of all of the three algorithms include random sampling operator, we averaged those algorithms’ performance under 20 above experiments. Figure 2 shows the relative square error (RSE) of the three algorithms. From these curves, we see that the performance of our algorithm is very outstanding. Even there are only 30% sampling traces, it can also get a relative perfect reconstruction data. As the increase of sampling rate, the reconstruction error of Tubal-Alt-Min algorithm decrease rapidly. Comparing with TNN, when the sampling rate over 50%, it improves the recovery error by orders of magnitude. It’s recovery error also better than the other algorithm almost in the whole sampling rate range.

Secondly, to evaluate the reconstruction error, we fixed the sa-

Then, we fixed the sampling rate at 40% to evaluate the completion performance on seismic data. The portion of reconstruc-tion result shows in figure 4. From figure 4 (b), 4 (c) and 4 (d), we observe that the missing traces are effectively recovered.

We also test the performance of the reconstruction method on a land data set that was acquired to monitor a heavy oil field in Anyue mountain, China. Our test data is a 25×200×600 tensor cut from the full-sampled area of the filed data. On this basis, we randomly sample 50% traces in the seismic tensor, then reconstruct it. To reconstruct the traces, we evaluated the low-tubal-rank of the data manually. Determined by the tSVD, we found it’s first 16 eigentubes’s l2 norm is much larger than the rest in almost 40 times. Consequently, we set the parameter of Alg. 1 r=16. Figure 4 shows portion of the result cut along inline direction. From the comparison of figure 5 (a), 5 (c) and

5 (d), the reconstruction performance is such amazing that almost no residual between 5 (a) and 5 (c) Compared with the reconstruction result of TNN, it seems no difference. However, the RSE gap between them almost have a few orders of magnitude. Figure 5 shows the difference between the specific details of the seismic data traces restored by the two algorithms.

In this article, we formulate the problem of poststack seismic data reconstruction as an low-tubal-rank decomposition problem. The adopted method is based on the alternating minimization approach for low-tubal rank tensor completion. The unknown low-tubal-rank tensor is parameterized as the product of two much smaller tensors with the low-tubal-rank property being automatically incorporated, and Tubal-Alt-Min alternates between estimating those two tensors using tensor least squares minimization. The biggest advantage of our algorithm is that it can achieve very high recovery accuracy in several it-

erations. From the experimental result, it potently proved that compared with contrast algorithms our algorithm improves the recovery error by orders of magnitude with much better convergence speed for higher sampling rates.

We would like to acknowledge financial support from the National Natural Science Foundation of China (Grant No.U1562218).