Many continuous control tasks have easily formulated objectives, yet using them directly as a reward in reinforcement learning (RL) leads to suboptimal policies. Therefore, many classical control tasks guide RL training using complex rewards, which require tedious hand-tuning. We automate the reward search with AutoRL, an evolutionary layer over standard RL that treats reward tuning as hyperparameter optimization and trains a population of RL agents to find a reward that maximizes the task objective. AutoRL, evaluated on four Mujoco continuous control tasks over two RL algorithms, shows improvements over baselines, with the the biggest uplift for more complex tasks. The video can be found at: <https://youtu.be/svdaOFfQyC8>. 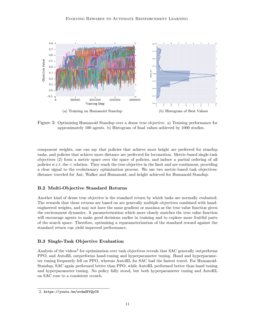 Despite solving a number of challenging problems (Kalashnikov et al., 2018; Chen et al., 2015; Levine et al., 2016), training RL agents remains difficult and tedious. One culprit is reward design, which currently requires many iterations of manual tuning. Reward is a scalar that communicates the task objective and desirable behaviors. Ideally, it should be an indicator of task completion (Sutton et al., 1992) or a simple metric over resulting trajectories. Consider a Humanoid task (Tassa et al., 2012), where objectives might be for the agent to travel as far or as fast as possible. Learning directly on these metrics is problematic, especially for high dimensional continuous control problems, for two reasons. First, RL requires the agent to explore until it stumbles onto the goal or improves the task metric, which can take a prohibitively long time (Andrychowicz et al., 2017). Second, there are many ways to accomplish a task, and some are less than ideal. For example, the Humanoid might run while flailing its arms, or roll on the ground. Practitioners circumvent those cases through reward shaping (Wiewiora, 2010). Beginning with simple rewards, such as distance travelled, they train a policy and observe the training outcome. Next, practitioners either add terms to the reward that provide informative feedback about progress, such as energy spent or torso verticality, or tune the weights between the reward terms. Then they retrain the policy, observe, and repeat until training is tractable and the agent is well-behaved. In the Humanoid task, the agent is expected to maximize the speed and time alive while minimizing the control and impact cost. The standard reward collapses this multi-objective into one scalar with carefully selected weights. This human-intensive process raises questions: a) Can we automate the tuning and learn a proxy reward that both promotes the learning and meets the task objective? and b) Given an already hand-tuned reward, is there a better parameterization that accomplishes the same multi-objective?

first find the reward parameters that maximize the goal reached sparse objective, and then find the neural network architecture that maximizes the learned proxy reward. In that setting, AutoRL improves both training stability and policy quality for sparse objectives for both tasks. But it remains an open question whether AutoRL, particularly the search for proxy rewards, is useful for other RL algorithms, tasks, and objectives.

Large-scale hyperparameter optimization has become a standard technique for improving deep RL performance by tuning learning hyperparameters (Shah et al., 2018; Gur et al., 2019). AutoRL uses the same toolset but for reward and network tuning. (Chiang et al., 2019) uses sparse objectives, such as reaching a goal for point-to-point navigation, or waypoints achieved for a path-following task. This is effective because agents can be given a variety of tasks, many of which are easy to achieve on a true sparse objective (such as nearby goals in uncluttered environments). Here, we focus on metric-based objectives.

M(S,O,A,D,R,γ). S are states, O⊂Rdo are observations, A⊂Rda are actions, and the system’s unknown dynamics are modeled as a transition distribution D:S×A×S→[0,1]. The reward, R:S×A→R is an immediate feedback to the RL agent, while 0<γ≤1 is a discount factor. The goal of RL is to find a policy, ^πR:S×A→[0,1] that maximizes the expected cumulative discounted reward R of trajectories T drawn from a set of initial conditions, N⊂O, guided by the policy π w.r.t. the system dynamics D:

POMDPs model the world, observations, actions, and reward; all affect learning and performance, and are usually chosen through trial and error. AutoRL addresses the gap by applying the AutoML toolset to RL’s pain points of POMDP modelling.

Problem formulation: An agent’s success at a task can often be evaluated over a trajectory T with a metric G(T). For example, success for the Humanoid Standup task is standing as tall as possible, while for Ant or Humanoid it is traveling as fast as possible. We can evaluate G(T) over trajectories T drawn from initial conditions N and controlled by a policy π to gauge the policy’s quality J(π) w.r.t. the fitness metric:

While the reward R measures immediate feedback to the agent, the objective metric G reflects human-interpretable trajectory quality and induces an ordering over policies. Humans want high-quality trajectories, which are sparse, but RL agents learn best from dense feedback, so we use G to help pick R as follows.

Consider an augmented POMDP, ~M(S,O,A,D,R(θ),γ,G), where θ∈Θ is the parameter of a proxy reward function R(θ). The goal of AutoRL is to solve ~M by finding a policy ~π that maximizes the fitness metric J defined in (2) given a population of agents ^π(R(θ)) with parameterization θ drawn from Θ:

Proxy rewards, R(θ), may contain new features that guide learning, or may reweight the objective G(T) to more closely match the gradient of the value function.

Algorithm: Denote a policy π(θ) learned with an externally-provided RL algorithm that optimizes the cumulative return (1) for a fixed θ as:

and let ng be the maximum population size, with nmc as the number of parallel trials.

We train a population of nmc parallel RL agents according to (4), each initialized with a different reward parameterization θi,i∈{1,⋯,ng}. The parameterization for the first nmc agents are selected randomly. When training of the ith

2) of the resulting policy π(θi) to obtain, ji. This estimate and reward parameterization, (θi,ji), are added to the population experience set Θ, while the policy and estimate, (π(θi),ji), are added to the policy evaluation set, Π. As the evaluation set Π is updated, AutoRL continually updates the current best policy ~π according to (2). Next, AutoRL selects the parameterization for the next trial from the population experience, Θ, according to Gaussian Process Bandits (Srinivas et al., 2012), and starts training a new RL agent. Finally, training stops after ng trials.

AutoRL scales linearly with the population size ng. Concurrent trials nmc must be smaller than ng, in order to have enough completed experience to select the next set of parameters. Overall, AutoRL requires O(nmc) processors, and runs ngnmc times longer than vanilla RL.

To assess AutoRL’s ability to reduce reward engineering while maintaining quality on existing metrics, we contrast two objectives: task objectives and standard returns. Task objectives measure task achievement for continuous control: distance traveled for Ant, Walker, and Humanoid, and height achieved for Standup. Standard returns are the metrics by which tasks are normally evaluated. For both objectives, the parameterized reward θ is a re-weighted standard reward (see Appendix B). We compare AutoRL with two baselines, hand-tuned and hyperparameter-tuned. Hand-tuned (HT) uses default learning parameters for each algorithm. Hyperparameter-tuned (HP) uses Vizier to optimize learning hyperparameters such as learning rate and discount factor. In all cases, AutoRL uses HT’s default hyperparameters. We train up to ng=1000 agents parallelized across nmc=100 workers. SAC trains for 2 million steps, while PPO’s training episodes depends on the environment (Table 1; see Appendix A). Policy quality (fitness metric (2)) w.r.t. the objective is evaluated over 50 trajectories.

Task Objective Evaluation: AutoRL outperforms the HP tuned baseline (blue) for all tasks trained with SAC (Figures 1a-d) and on Walker and Humanoid for PPO (Figures 1e-h). Both outperform the hand-tuned baseline, whose parameters AutoRL uses. Note that AutoRL uses non-tuned learning hyperparameters. AutoRL’s benefit over HP tuning is consistent - though relatively small for simpler tasks - but is very noticeable on the most complex task, Humanoid, with 489% improvement over HP tuning. AutoRL shows 64% improvement on Humanoid. It is interesting to note that in some cases AutoRL converges more slowly, and does not reach peak performance until very late in the training process (Figures (a)a, (c)c, and (h)h). We suspect this is because the tasks simply require more training iterations to converge, and the baselines end up getting stuck in a local minima, while AutoRL manages to escape it.

In this paper we learn proxy rewards for continuous control tasks with AutoRL, a method that automates RL reward design by using evolutionary optimization over a given objective. Benchmarking over two RL algorithms, four MujoCo tasks, and two different true objectives show that: a) AutoRL outperforms both hand-tuned and learning hyperparameter tuned RL; b) produces comparable and often superior policies with a simpler true objective, hence reducing human engineering time; and c) often produces better policies faster than hyperparameter tuning, suggesting that under a limited training budget tuning proxy rewards might be more beneficial than tuning hyperparameter and that a more in-depth analysis would be appropriate. All three conclusions hold even stronger for more complex environments such as Humanoid, making AutoRL a promising technique for training RL agents for complex tasks, with less hand engineering and better results.

We use the TF Agents (Guadarrama et al., 2018) implementation of SAC (Haarnoja et al., 2018b, a) and PPO (Schulman et al., 2017). In the PPO implementation, training steps shown in the charts are equal to the number of gradient update steps, and training is done 25 times every N episodes where N is environment-specific and defined in Table 1. For Ant and Walker the approximate number of environment steps is 19.8 million, and for Standup and Humanoid it is 158.4 million.

Metric-based objectives provide a way out of the sparse optimization issue by splitting the difference between a true sparse objective and a hand-engineered reward. Without committing to reward component weights, one can say that policies that achieve more height are preferred for standup tasks, and policies that achieve more distance are preferred for locomotion. Metric-based single-task objectives (2) form a metric space over the space of policies, and induce a partial ordering of all policies w.r.t. the < relation. They reach the true objective in the limit and are continuous, providing a clear signal to the evolutionary optimization process. We use two metric-based task objectives: distance traveled for Ant, Walker and Humanoid, and height achieved for Humanoid Standup.

Another kind of dense true objective is the standard return by which tasks are normally evaluated. The rewards that these returns are based on are generally multiple objectives combined with hand-engineered weights, and may not have the same gradient or maxima as the true value function given the environment dynamics. A parameterization which more closely matches the true value function will encourage agents to make good decisions earlier in training and to explore more fruitful parts of the search space. Therefore, optimizing a reparameterization of the standard reward against the standard return can yield improved performance.

b.5 Cross-Evaluation of Single-Task Objectives and Standard Returns

All the environments in Table 1 define standard rewards with predefined components listed in Table 2. AutoRL’s reward optimization changes the parameterization of these components, but the return collected over the standard reward parameterization is the normal way that these environments are evaluated. However, task objective optimization is evaluating over a different objective - normally, just the achievement objective of Table 2. We would expect optimizing over a different reward to produce different performance on the standard return; conversely, we would expect the standard return to produce different performance on the task objectives.