Traditional event detection methods heavily rely on manually engineered rich features. Recent deep learning approaches alleviate this problem by automatic feature engineering. But such efforts, like tradition methods, have so far only focused on single-token event mentions, whereas in practice events can also be a phrase. We instead use forward-backward recurrent neural networks (FBRNNs) to detect events that can be either words or phrases. To the best our knowledge, this is one of the first efforts to handle multi-word events and also the first attempt to use RNNs for event detection. Experimental results demonstrate that FBRNN is competitive with the state-of-the-art methods on the ACE 2005 and the Rich ERE 2015 event detection tasks. 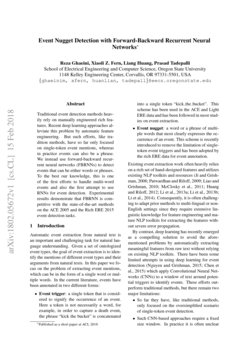 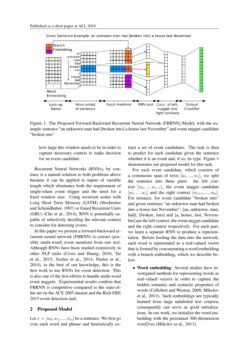 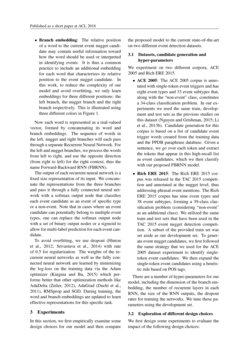 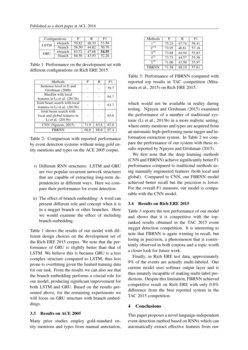 In this paper we present our system for the detection and classification...
Janek Ebbers, et al. ∙

Automatic event extraction from natural text is an important and challenging task for natural language understanding. Given a set of ontologized event types, the goal of event extraction is to identify the mentions of different event types and their arguments from natural texts. In this paper we focus on the problem of extracting event mentions, which can be in the form of a single word or multiple words. In the current literature, events have been annotated in two different forms:

By contrast, deep learning has recently emerged as a compelling solution to avoid the aforementioned problems by automatically extracting meaningful features from raw text without relying on existing NLP toolkits. There have been some limited attempts in using deep learning for event detection [Nguyen and Grishman2015, Chen et al.2015]

which apply Convolutional Neural Networks (CNNs) to a window of text around potential triggers to identify events. These efforts outperform traditional methods, but there remain two major limitations:

Recurrent Neural Networks (RNNs), by contrast, is a natural solution to both problems above because it can be applied to inputs of variable length which eliminates both the requirement of single-token event trigger and the need for a fixed window size. Using recurrent nodes with Long Short Term Memory (LSTM)

In this paper we present a forward-backward recurrent neural network (FBRNN) to extract (possibly multi-word) event mentions from raw text. Although RNNs have been studied extensively in other NLP tasks [Cross and Huang2016, Tai et al.2015, Socher et al.2014, Paulus et al.2014], to the best of our knowledge, this is the first work to use RNNs for event detection. This is also one of the first efforts to handle multi-word event nuggets. Experimental results confirm that FBRNN is competitive compared to the state-of-the-art on the ACE 2005 dataset and the Rich ERE 2015 event detection task.

be a sentence. We first go over each word and phrase and heuristically extract a set of event candidates. The task is then to predict for each candidate given the sentence whether it is an event and, if so, its type. Figure 1 demonstrates our proposed model for this task.

. For instance, for event candidate “broken into” and given sentence “an unknown man had broken into a house last November”; [an, unknown, man, had], [broken, into] and [a, house, last, November] are the left context, the event nugget candidate and the right context respectively. For each part, we learn a separate RNN to produce a representation. Before feeding the data into the network, each word is represented as a real-valued vector that is formed by concatenating a word embedding with a branch embedding, which we describe below:

Now each word is represented as a real-valued vector, formed by concatenating its word and branch embeddings. The sequence of words in the left, nugget and right branches will each pass through a separate Recurrent Neural Network. For the left and nugget branches, we process the words from left to right, and use the opposite direction (from right to left) for the right context, thus the name Forward-Backward RNN (FBRNN).

The output of each recurrent neural network is a fixed size representation of its input. We concatenate the representations from the three branches and pass it through a fully connected neural network with a softmax output node that classifies each event candidate as an event of specific type or a non-event. Note that in cases where an event candidate can potentially belong to multiple event types, one can replace the softmax output node with a set of binary output nodes or a sigmoid to allow for multi-label prediction for each event candidate.

To avoid overfitting, we use dropout [Hinton et al.2012, Srivastava et al.2014] with rate of 0.5 for regularization. The weights of the recurrent neural networks as well as the fully connected neural network are learned by minimizing the log-loss on the training data via the Adam optimizer [Kingma and Ba2015] which performs better that other optimization methods like AdaDelta [Zeiler2012], AdaGrad [Duchi et al.2011]

, RMSprop and SGD. During training, the word and branch embeddings are updated to learn effective representations for this specific task.

In this section, we first empirically examine some design choices for our model and then compare the proposed model to the current state-of-the-art on two different event detection datasets.

There are a number of hyper-parameters for our model, including the dimension of the branch embedding, the number of recurrent layers in each RNN, the size of the RNN outputs, the dropout rates for training the networks. We tune these parameters using the development set.

We first design some experiments to evaluate the impact of the following design choices:

Table 1 shows the results of our model with different design choices on the development set of the Rich ERE 2015 corpus. We note that the performance of GRU is slightly better than that of LSTM. We believe this is because GRU is a less complex structure compared to LSTM, thus less prone to overfitting given the limited training data for our task. From the results we can also see that the branch embedding performs a crucial role for our model, producing significant improvement for both LSTM and GRU. Based on the results presented above, for the remaining experiments we will focus on GRU structure with branch embeddings.

Many prior studies employ gold-standard entity mentions and types from manual annotation, which would not be available in reality during testing. Nguyen and Grishman (2015) examined the performance of a number of traditional systems [Li et al.2013b] in a more realistic setting, where entity mentions and types are acquired from an automatic high-performing name tagger and information extraction system. In Table 2 we compare the performance of our system with these results reported by Nguyen and Grishman (2015).

We first note that the deep learning methods (CNN and FBRNN) achieve significantly better F1 performance compared to traditional methods using manually engineered features (both local and global). Compared to CNN, our FBRNN model achieved better recall but the precision is lower. For the overall F1 measure, our model is comparable with the CNN model.

Table 3 reports the test performance of our model and shows that it is competitive with the top-ranked results obtained in the TAC 2015 event nugget detection competition. It is interesting to note that FBRNN is again winning in recall, but losing in precision, a phenomenon that is consistently observed in both corpora and a topic worth a closer look for future work.

Finally, in Rich ERE test data, approximately 9% of the events are actually multi-labeled. Our current model uses softmax output layer and is thus innately incapable of making multi-label predictions. Despite this limitation, FBRNN achieved competitive result on Rich ERE with only 0.8% difference from the best reported system in the TAC 2015 competition.

This paper proposes a novel language-independent event detection method based on RNNs which can automatically extract effective features from raw text to detect event nuggets. We conducted two experiments to compare FBRNN with the state-of-the-art event detection systems on the ACE 2005 and Rich ERE 2015 corpora. These experiments demonstrate that FBRNN achieves competitive results compared to the current state-of-the-art.