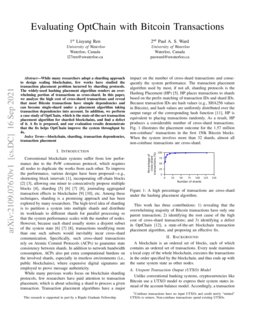 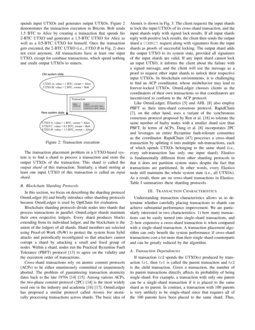 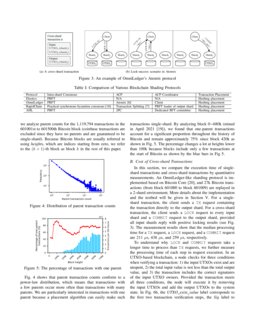 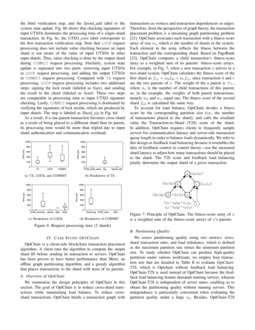 Selfish Opaque Transaction Ordering in the Bitcoin Blockchain: The Case for Chain Neutrality

SonicChain: A Wait-free, Pseudo-Static Approach Toward Concurrency in Blockchains

Blockchains have a two-sided reputation: they are praised for disrupting...
Kian Paimani, et al. ∙

Current blockchains are restricted by the low throughput. Aimed at this ...
Donghui Ding, et al. ∙

Payment channel networks (PCNs) are one of the most prominent solutions ...
Samarth Tiwari, et al. ∙

Conventional blockchain systems suffer from low performance due to the PoW consensus protocol, which requires all nodes to duplicate the works from each other. To improve the performance, various designs have been proposed—e.g., shortening block intervals [croman2016scaling], incorporating off-chain blocks [lewenberg2015inclusive][li2018scaling], allowing one miner to consecutively propose multiple blocks [eyal2016bitcoin], sharding [luu2016secure_elastico][kokoris2018omniledger][zamani2018rapidchain][dang2019towards], journaling aggregated transaction effects to blockchains [decker2015fast] [poon2016bitcoin], etc. Among these techniques, sharding is a promising approach and has been explored by many researchers. The high-level idea of sharding is to partition a system into multiple shards and distribute its workloads to different shards for parallel processing so that the system performance scales with the number of nodes. However, because each shard usually stores a disjoint subset of the system state [kokoris2018omniledger][zamani2018rapidchain][dang2019towards], transactions modifying more than one such subsets would inevitably incur cross-shard communication. Specifically, such cross-shard transactions rely on Atomic Commit Protocols (ACPs) to guarantee state consistency between shards. In addition to network bandwidth consumption, ACPs also put extra computational burdens on the involved shards, especially in trustless environments (i.e., public blockchains), where expensive digital signatures are employed to prove message authenticity.

This work has three contributions: 1) revealing that the overwhelming majority of Bitcoin transactions have only one parent transaction; 2) identifying the root cause of the high cost of cross-shard transactions; and 3) identifying a defect in OptChain [nguyen2019optchain], a state-of-the-art blockchain transaction placement algorithm, and proposing an effective fix.

Unlike conventional banking systems, cryptocurrencies like Bitcoin use a UTXO model to express their system states instead of the account-balance model. Accordingly, a transaction spends input UTXOs and generates output UTXOs. Figure 2 demonstrates the transaction execution in Bitcoin. Bob sends 1.5 BTC to Alice by creating a transaction that spends his 2-BTC UTXO and generates a 1.5-BTC UTXO for Alice as well as a 0.5-BTC UTXO for himself. Once the transaction gets executed, the 2-BTC UTXO (i.e., UTXO B in Fig. 2) does not exist anymore. All transactions have at least one input UTXO, except for coinbase transactions, which spend nothing and credit output UTXOs to miners.

Blockchain sharding protocols divide nodes into shards that process transactions in parallel. OmniLedger shards maintain their own respective ledgers. Every shard produces blocks extending from its individual ledger, and the blockchain is the union of the ledgers of all shards. Shard members are selected using Proof-of-Work (PoW) to protect the system from Sybil attacks and periodically reconfigured so that attackers cannot corrupt a shard by attacking a small and fixed group of nodes. Within a shard, nodes run the Practical Byzantine Fault Tolerance (PBFT) protocol [castro1999practical] to agree on the validity and the execution order of transactions.

Cross-shard transactions rely on atomic commit protocols (ACPs) to be either unanimously committed or unanimously aborted. The problem of guaranteeing transaction atomicity dates back to the late 1970s [lampson1979crash][gray1978notes]. Among various ACPs, the two-phase commit protocol (2PC) [lampson1979crash] is the most widely used one in the industry and academia [guerraoui2017fast][skeen1981nonblocking]. OmniLedger has proposed a similar protocol called Atomix for atomically processing transactions across shards. The basic idea of Atomix is shown in Fig. 3. The client requests the input shards to lock the input UTXOs of its cross-shard transaction, and the input shards reply with signed lock results. If all input shards reply with positive lock results, the client then sends the output shard a COMMIT request along with signatures from the input shards as proofs of successful locking. The output shard adds the output UTXO to its system state, provided all signatures of the input shards are valid. If any input shard cannot lock an input UTXO, it informs the client about the failure with a signed message, and the client will use the message as a proof to request other input shards to unlock their respective input UTXOs. In blockchain environments, it is challenging to find an ACP coordinator, whose misbehavior may lead to forever-locked UTXOs. OmniLedger chooses clients as the coordinators of their own transactions so that coordinators are incentivized to conform to the ACP protocol.

Like OmniLedger, Elastico [luu2016secure_elastico] and AHL [dang2019towards] also employ PBFT as their intra-shard consensus protocol. RapidChain [zamani2018rapidchain], on the other hand, uses a variant of the synchronous consensus protocol proposed by Ren et al. [ren2017practical] to tolerate the same number of faulty nodes with a smaller shard size than PBFT. In terms of ACPs, Dang et al. [dang2019towards] incorporates 2PC and leverages an entire Byzantine fault-tolerant committee as the coordinator. RapidChain [47] processes a cross-shard transaction by splitting it into multiple sub-transactions, each of which spends UTXOs belonging to the same shard (i.e., every sub-transaction has only one input shard). Elastico is fundamentally different from other sharding protocols in that it does not partition system states despite the fact that transactions are partitioned. In other words, every Elastico node still maintains the whole system state (i.e., all UTXOs). As a result, there are no cross-shard transactions in Elastico. Table I summarizes these sharding protocols.

heights, which are indices starting from zero, we refer to the (k+1)-th block as block k in the rest of this paper.

In this section, we compare the execution time of single-shard transactions and cross-shard transactions by quantitative measurements. An OmniLedger-like sharding protocol is implemented based on Bitcoin Core [bitcoinCore], and 27k Bitcoin transactions (from block 601000 to block 601009) are replayed in a 2-shard environment. More details about the implementation and the testbed will be given in Section V. For a single-shard transaction, the client sends a TX request containing the transaction directly to the output shard. For a cross-shard transaction, the client sends a LOCK request to every input shard and a COMMIT request to the output shard, provided all input shards reply with positive locking results (see Fig. 3). The measurement results show that the median processing time for a TX request, a LOCK request, and a COMMIT request are 211 μs, 438 μs, and 259 μs, respectively.

As a result, if a one-parent transaction becomes cross-shard as a result of being placed to a different shard than its parent, its processing time would be more than tripled due to input shard authentication and communication overhead.

OptChain is a client-side blockchain transaction placement algorithm. A client runs the algorithm to compute the output shard ID before sending its transaction to servers. OptChain has been proven to have better performance than Metis, an offline graph partitioning algorithm, and a greedy algorithm that places transactions to the shard with most of its parents.

To account for load balance, OptChain divides a fitness score by the corresponding partition size (i.e., the number of transactions placed to the shard), and calls the resultant value the Transaction-to-Shard (T2S) score of the shard. In addition, OptChain requires clients to frequently sample servers for communication latency and server-side transaction queue length in order to balance loads dynamically. We refer to this design as feedback load balancing because it resembles the idea of feedback control in control theory—use the measured shard latency to adjust how many transactions should be placed to the shard. The T2S score and feedback load balancing jointly determine the output shard of a given transaction.

To confirm the above hypothesis, we analyze the dynamic shard loads in a 4-shard environment as illustrated in Fig. 10, which implies that OptChain-T2S fails to balance loads since block 253k. Unsurprisingly, HP balances loads remarkably well in that every shard constantly receives about 25% of the transactions. In Fig. (a)a, the three small spikes between block 200k and 260k are the starting points of datasets 2∼4, and the glitches at the beginning result from small block sizes. Another observation is that, in Fig. (b)b, all curves are quite flat in range of block [0, 50k) and block [125k, 175k), but fluctuate a lot in the range of [70k, 120k) and [180, 250k). We find that this pattern occurs with transactions spending the output UTXOs of their immediate predecessors, which are ordered right before them in the same block. OptChain-T2S tends to place such transactions to the same shard as their predecessors. As a result, a sequence of such transactions causes a shard to receive more transactions than other shards temporarily. For example, starting from the 326th transaction in block 177253, each of the 267 subsequent transactions is a child of its immediate predecessors [spendLastTx]. Table III shows that such transactions account for a relatively high percentage whenever the shard load curves fluctuate drastically.

We implemented OptChain as well as an OmniLedger-like sharding protocol based on Bitcoin Core [bitcoinCore]. We made the same change to the OmniLedger protocol as the OptChain paper does to overcome the bandwidth limit—clients send transactions directly to the input and output shards instead of gossiping the transaction. Experiments are done on a local cluster. 64 VMs (each with 2 CPUs and 12GB memory) are created on 16 machines, each of which has dual Xeon E5-2620 at 2.1 GHz (12 cores) and 64GB RAM. Each VM runs an instance of our modified Bitcoin Core and is used as a blockchain node. One client runs on another machine with dual Xeon E5-2630 at 2.6 GHz (12 cores, 2 hyperthreads per core) and 256GB RAM. The client reads historical transactions in Bitcoin block [250k, 260k) with 2.9 million transactions in total, and sends them to the peers at a rate of 4.5k tps. Transactions in this range are used in order to evaluate the impact of aggregating transactions on system performance. A latency of 100 ms is imposed on every link between peers, and the bandwidth is limited to 500 Mbps. We use this relatively high bandwidth because we notice that OptChain-T2S places most transactions in one shard, and low network bandwidth will be a bottleneck for that shard.

Fig. (a)a demonstrates that feedback load balancing mitigates the performance degradation of OptChain-T2S but cannot eliminate the degradation. By comparing Fig. (c)c and (d)d, one can see that, although the load of the largest partition under OptChain is lower than that under OptChain-T2S, it still surges at around 200s, exactly when the throughput starts to drop. In contrast, OptNorm distributes load fairly evenly at 200s, which confirms that it can effectively overcome the aggregating transaction issue of OptChain. The overall throughput of HP and OptNorm are 865 tps and 3487 tps, respectively, which means OptNorm improves the system performance by 4x.