Determining the material category of a surface from an image is a demanding task in perception that is drawing increasing attention. Following the recent remarkable results achieved for image classification and object detection utilising Convolutional Neural Networks (CNNs), we empirically study material classification of everyday objects employing these techniques. More specifically, we conduct a rigorous evaluation of how state-of-the art CNN architectures compare on a common ground over widely used material databases. Experimental results on three challenging material databases show that the best performing CNN architectures can achieve up to 94.99% mean average precision when classifying materials. 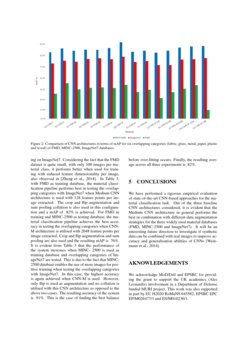 Image classification and object detection have been active areas of research during the last few years [Girshick et al., 2013, Huang et al., 2011, Wang et al., 2010]. Initially, handcrafted approaches, such as Bag-of-Visual-Words (BoVW) [Csurka et al., 2004], were employed that yielded reasonably good results for these two tasks. However, the emergence of Convolutional Neural Networks (CNNs) [LeCun et al., 1989] for solving these vision based problems has changed the scenario altogether by comprehensively outperforming the handcrafted approaches [Donahue et al., 2014, Razavian et al., 2014, Sermanet et al., 2013]. While the morphology of these networks remains handcrafted, the accommodation of a large number of parameters trained from data and numerous layers of non-linear feature extractors have lead the researchers to term them as deep representations. After setting the performance benchmark for image classification and object detection tasks [Krizhevsky et al., 2012, Zeiler and Fergus, 2014], these deep architectures are now finding their way into a number of vision based applications [Donahue et al., 2014, Girshick et al., 2014, Oquab et al., 2014, Razavian et al., 2014, Sermanet et al., 2013, Simonyan and Zisserman, 2014].

One such application is classification of materials from their appearance utilising a single image. Indeed, perception of recognized surface material plays a major role in scene understanding and has a wide range of applications, including robotics. Material classification in the wild is considered a challenging problem due to the fact that materials regularly exhibit large intra-class and inter-class variability. This particular topic has received attention fairly recently and a handful of computer vision systems have been explicitly constructed to recognize materials in the wild so far. In the early work on image texture analysis by

[Dana et al., 1999], the CUReT dataset was introduced which was generated in a restricted environment and only encompassed flat texture patches. Over 95% classification accuracy was reported on the CUReT dataset by [Varma and Zisserman, 2009]. On the contrary, only 23% accuracy was accomplished on the more challenging Flickr material dataset (FMD) [Sharan et al., 2010]. The work of [Liu et al., 2010], in which they presented a number of new features for classifying materials, achieved 45% accuracy on FMD. This was improved by [Hu et al., 2011] that achieved 54% classification accuracy by expanding more on features. Finally, [Cimpoi et al., 2014]

It is, however, still unclear how different CNN methods compare with each other for the material classification task as previous studies did not test these deep architectures extensively on common ground [Bell et al., 2015]. Since the performance of computer vision systems depends significantly on implementation details [Chatfield et al., 2014], it is important to take into account factors, such as the use of very large scale datasets, GPU computation and data augmentation, when comparing CNN methods for material classification. To our knowledge, this particular work is the first attempt to do a systematic and rigorous evaluation of the state-of-the-art CNN architectures for material classification in the wild. Considering the effect of different design and implementation choices allowed a fair, unbiased comparison on a common ground-something that has been largely missing so far in the literature.

The rest of the paper is organised as follows. Section 2 gives details of the material classification pipeline used for our experiments. The evaluation results for state-of-the-art CNN architectures employing three widely used materials databases of real-world images are presented in Section 3. Section 4 performs a cross-dataset analysis for real-world images. Finally, conclusions are given in Section 5.

. All these baseline CNN architectures are built on the Caffe framework

[Jia et al., 2014] and are pre-trained on ImageNet [Deng et al., 2009]. Each network comprises 5 convolutional and 3 fully connected layers for a total of 8 learnable layers. For further design and implementation details for these architectures, please see Table 1 in [Chatfield et al., 2014]. Please note that the results of the penultimate layer (layer 7) are used for the SVM classifier in this particular work. Each test yields a feature vector of 4096 dimensions per image. The CNN-M is also tested in situations when the feature dimensionality is reduced to 2048, 1024, and 128, and in cases where the images are turned into grey scales.

This section presents the results for the three baseline CNN architectures, with different data augmentation strategies, for the material classification task when trained and tested on real- world images. The evaluation procedure is divided into three different sets of experiments, each one employing a different, widely used materials database consisting of real-world images related to specific material categories. In each case, the employed materials database is used for generating the training and testing datasets which implies no cross-dataset analysis for these particular sets of experiments. This approach is used to obtain comparison results across all available material categories for each benchmark database, thus complementing the previous studies in the literature on these databases.

Three different databases are used in our experiments: 1) Flickr Material Database (FMD) [Sharan et al., 2010], 2) ImageNet7 dataset [Hu et al., 2011] which was derived from ImageNet [Deng et al., 2009] by collecting 7 common material categories, and 3) MINC-2500 which is a patch classification dataset with 2500 samples per category [Bell et al., 2015]. Table 1 gives an overview of the three different material databases used for these experiments. As evident, all three databases consist of neither the same number of images nor categories between them. For this specific reason and in order to keep the tests on a common base, we consider the first half of the images enclosed in each database category as positive training samples and the other half for testing. Regarding negative training samples, the first 10% of the total images per category are aggregated in order to generate the negative training subset. Finally, a dataset [Vedaldi and Zisserman, ] containing 1414 random images is utilised and kept constant as the negative test data of our system for all the experiments that follow. In total, 14 different variants of the baseline CNN architectures with different data augmentation strategies are compared on FMD, ImageNet7 and MINC-2500.

Table 2 shows the results for the three databases for state-of-the-art CNN architectures with different data augmentation strategies. It is evident that the Medium CNN architecture with crop and flip augmentation enabled, whereas the corresponding descriptors using stacking both in training and testing, used for the samples of augmented images, performs the best for both MINC-2500 and FMD. On the other hand, the Medium CNN architecture, including lower dimensional full 7 layers of 128 dimensions, with crop and flip augmentation enabled, when the corresponding descriptors using sum-pooling are utilised for the samples of augmented images in testing only, performs the best in the case of ImageNet7. Compared to [Oquab et al., 2014], where 85.0% mean accuracy was achieved on MINC (considering only the common categories with FMD) using the AlexNet [Krizhevsky et al., 2012], here an average of 92.48% on MINC-2500 is achieved across all considered CNN architectures. Regarding the FMD database, [Liu et al., 2010] with their optimal feature set managed 44.6% recognition rate, while in [Girshick et al., 2014] 54% accuracy is achieved with their extended kernel descriptors. In our case, an improved mAP of 60% (on average) is achieved for the 14 different CNN configurations that we tested. Finally, the creators of the ImageNet7 [Hu et al., 2011] reported 60% recognition accuracy on their database by combining all 5 available kernel descriptors. On the contrary, mAP of 71.18% (on average) is achieved here as it is clear from Table 2 across all considered CNN configurations.

A comparative plot for mean average precision achieved by the state-of-the-art CNN architectures for the three databases (MINC-2500, FMD and ImageNet7) is shown in Figure 2. This plot encompasses only the six common/overlapping categories for the three databases to demonstrate the variations in performance of different CNN architectures across these categories. The Medium CNN architecture gives the best mAP (91.10%) with stack augmentation both for training and for testing purposes. With the same configuration, the best performance of 77.46% is achieved on ImageNet7, while a considerably lower mAP of 51.40% is obtained for FMD. Such decline occurs primarily because of the limited dataset size, whereby learning the millions of parameters of a CNN is usually impractical and may lead to over-fitting.

Results for three different cross-dataset experiments are given in Table 3: 1) Training on FMD and testing on ImageNet7 2) Training on FMD and testing on MINC-2500 3) Training on MINC-2500 and testing on ImageNet7. Considering the fact that the FMD dataset is quite small, with only 100 images per material class, it performs better when used for training with reduced feature dimensionality per image, also observed in [Zheng et al., 2014]. In Table 3, with FMD as training database, the material classification pipeline performs best in testing the overlapping categories with ImageNet7 when Medium CNN architecture is used with 128 feature points per image extracted. The crop and flip augmentation and sum pooling collation is also used in this configuration and a mAP of  82% is achieved. For FMD as training and MINC-2500 as testing database, the material classification pipeline achieves the best accuracy in testing the overlapping categories when CNN-M architecture is utilised with 2048 feature points per image extracted. Crop and flip augmentation and sum pooling are also used and the resulting mAP is  76%. It is evident from Table 3 that the performance of the system increases when MINC- 2500 is used as training database and overlapping categories of ImageNet7 are tested. This is due to the fact that MINC-2500 database enables the use of more images for positive training when testing the overlapping categories with ImageNet7. In this case, the highest accuracy is again achieved when CNN-M is used. However, only flip is used as augmentation and no collation is utilised with this CNN architecture as opposed to the above two cases. The resulting accuracy of the system is  91%. This is the case of finding the best balance before over-fitting occurs. Finally, the resulting average across all three experiments is  82%.

We have performed a rigorous empirical evaluation of state-of-the-art CNN-based approaches for the material classification task. Out of the three baseline CNN architectures considered, it is evident that the Medium CNN architecture in general performs the best in combination with different data augmentation strategies for the three widely used material databases (FMD, MINC-2500 and ImageNet7). It will be an interesting future direction to investigate if synthetic data can be combined with real images to improve accuracy and generalisation abilities of CNNs [Weinmann et al., 2014].

We acknowledge MoD/Dstl and EPSRC for providing the grant to support the UK academics (Ales Leonardis) involvement in a Department of Defense funded MURI project. This work was also supported in part by EU H2020 RoMaNS 645582, EPSRC EPC EP/M026477/1 and ES/M010236/1.