Security-critical applications such as malware, fraud, or spam detection, require machine learning models that operate on examples from constrained discrete domains. In these settings, gradient-based attacks that rely on adding perturbations often fail to produce adversarial examples that meet the domain constraints, and thus are not effective. We introduce a graphical framework that (1) formalizes existing attacks in discrete domains, (2) efficiently produces valid adversarial examples with guarantees of minimal cost, and (3) can accommodate complex cost functions beyond the commonly used p-norm. We demonstrate the effectiveness of this method by crafting adversarial examples that evade a Twitter bot detection classifier using a provably minimal number of changes. 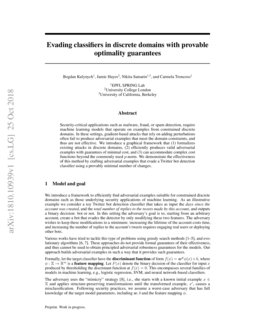 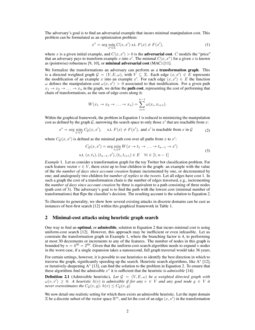 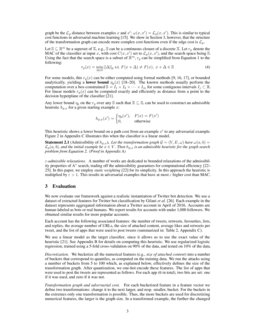 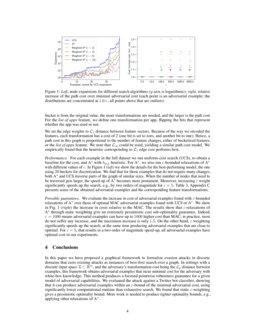 We introduce a framework to efficiently find adversarial examples suitable for constrained discrete domains such as those underlying security applications of machine learning. As an illustrative example we consider a toy Twitter bot detection classifier that takes as input the days since the account was created, and the total number of replies to the tweets made by this account, and outputs a binary decision: bot or not. In this setting the adversary’s goal is to, starting from an arbitrary account, create a bot that evades the detector by only modifying these two features. The adversary wishes to keep these modifications to a minimum: increasing the lifetime of the account costs time, and increasing the number of replies to the account’s tweets requires engaging real users or deploying other bots.

(Xu et al., 2016; Dang et al., 2017). These approaches do not provide formal guarantees of their effectiveness, and thus cannot be used to obtain principled adversarial robustness guarantees for the models. Our approach builds adversarial examples in such a way that it provides such guarantees.

Formally, let the target classifier have the discriminant function of form f(x)=w⊺ϕ(x)+b, where ϕ:X→Rm is a feature mapping. Let F(x) denote the binary decision of the classifier for input x produced by thresholding the discrimant function at f(x)=0

The adversary uses the “mimicry” strategy (Demontis et al., 2017), i.e., she starts with a known initial example x∈X and applies structure-preserving transformations until the transformed example, x′, causes a misclassification. Following security practices, we assume a worst-case adversary that has full knowledge of the target model parameters, including w,b and the feature mapping ϕ.

The adversary’s goal is to find an adversarial example that incurs minimal manipulation cost. This problem can be formulated as an optimization problem:

We formalize the transformations an adversary can perform as a transformation graph. This is a directed weighted graph G=(V,E,ω), with V⊆X. Each edge (x,x′)∈E represents the modification of an example x into an example x′. For each edge (x,x′)∈E the function ω defines the manipulation cost ω(x,x′)>0 associated to that modification. For a given path x1→x2→…→xn in the graph, we define the path cost, representing the cost of performing that chain of transformations, as the sum of edge costs along it:

Within the graphical framework, the problem in Equation 1 is reduced to minimizing the manipulation cost as defined by the graph G, narrowing the search space to only those x′ that are reachable from x:

where CG(x,x′) is defined as the minimal path cost over all paths from x to x′:

Let us consider a transformation graph for the toy Twitter bot classification problem. For each feature vector

v∈V, there exist up to four children in the graph: an example with the value of the the number of days since account creation feature incremented by one, or decremented by one; and analogously two children for number of replies to the tweets. Let all edges have cost 1. In such a graph the cost of a transformation chain is the number of edges traversed, e.g., incrementing the number of days since account creation by three is equivalent to a path consisting of three nodes (path cost of 3). The adversary’s goal is to find the path with the lowest cost (minimal number of transformations) that flips the classifier’s decision. The resulting account is the solution to Equation 2.

To illustrate its generality, we show how several existing attacks in discrete domains can be cast as instances of best-first search (Hart et al., 1968) within this graphical framework in Table 1.

One way to find an optimal, or admissible, solution to Equation 2 that incurs minimal cost is using uniform-cost search (Hart et al., 1968). However, this approach may be inefficient or even infeasible. Let us constrain the transformation graph in Example 1, where the branching factor is 4, to performing at most 30 decrements or increments to any of the features. The number of nodes in this graph is bounded by n=430=260. Given that the uniform-cost search algorithm needs to expand n nodes in the worst case, if a single expansion takes a nanosecond, full graph traversal would take 36 years.

For certain settings, however, it is possible to use heuristics to identify the best direction in which to traverse the graph, significantly speeding up the search. Heuristic search algorithms, like A

∗ (Hart et al., 1968), or iteratively-deepening A∗ (Korf, 1985), can find the solution to the problem in Equation 2. To ensure that these algorithms find the admissible x∗ it is sufficient that the heuristic is admissible (Dechter and Pearl, 1985):

We now detail one realistic setting for which there exists an admissible heuristic. Let the input domain X be a discrete subset of the vector space Rm, and let the cost of an edge (x,x′) in the transformation graph be the Lp distance between examples x and x′: ω(x,x′)=Lp(x,x′)

. This is similar to typical cost functions in adversarial machine learning

(Sharif et al., 2018). We show in Section 3, however, that the structure of the transformation graph can encode more complex cost functions even if the edge cost is Lp.

Let S⊆Rm be a superset of X, e.g., S can be a continuous closure of a discrete X. Let rp denote the MAC of the classifier at input x, with cost C(x,x′) set to Lp(x,x′), and the search space being S. Using the fact that the search space is a subset of Rm, rp can be simplified from Equation 1 to the following:

Any lower bound ηp on the rp over any S such that X⊆S, can be used to construct an admissible heuristic hp,x for a given starting example x:

This heuristic shows a lower bound on a path cost from an example x′ to any adversarial example. Figure 2 in Appendix C illustrates this when the classifier is a linear model.

Let the transformation graph G=(V,E,ω) have ω(a,b)=Lp(a,b), and the initial example be x∈V. Then hp,x is an admissible heuristic for the graph search problem from Equation 2. (Proof in Appendix A)

ε-admissible relaxations. A number of works are dedicated to bounded relaxations of the admissibility properties of A∗ search, trading off the admissibility guarantees for computational efficiency (Pohl, 1970, 1973; Pearl and Kim, 1982; Likhachev et al., 2003). In this paper, we employ static weighting (Pohl, 1970) for its simplicity. In this approach the heuristic is multiplied by ε>1. This results in adversarial examples that have at most ε higher cost than MAC.

We now evaluate our framework against a realistic instantiation of Twitter bot detection. We use a dataset of extracted features for Twitter bot classification by Gilani et al. (2017). Each example in the dataset represents aggregated information about a Twitter account in April of 2016. Accounts are human-labeled as bots or real humans. We report results for accounts with under 1,000 followers. We obtained similar results for more popular accounts.

Each account has the following associated features: the number of tweets, retweets, favourites, lists, and replies, the average number of URLs, the size of attached content, average likes and retweets per tweet, and the list of apps that were used to post tweets (summarized in: Table 2, Appendix C).

We use a linear model as the target classifier, since it allows us to use the exact value of the heuristic (Fawzi et al., 2018). See Appendix B for details on computing this heuristic. We use regularized logistic regression, trained using a 5-fold cross-validation on 90% of the data, and tested on 10% of the data.

Discretization. We bucketize all the numerical features (e.g., size of attached content

) into a number of buckets that correspond to quantiles, as computed on the training data. We run the attacks using a number of buckets from 5 to 100 which, as explained below, effectively defines the size of the transformation graph. After quantization, we one-hot encode these features. The list of apps that were used to post the tweets are represented as follows. For each app (6 in total), two bits are set: one if it was used, and zero if it was not.

We set the edge weights to L1 distance between feature vectors. Because of the way we encoded the features, each transformation has a cost of 2 (one bit is set to zero, and another bit to one). Hence, a path cost in this graph is proportional to the number of feature changes, either of bucketized features, or the list of apps feature. We note that L∞ could be used, yielding a similar path cost model. We empirically found that the heuristic corresponding to L1 edge cost performs best.

Performance. For each example in the full dataset we run uniform-cost search (UCS), to obtain a baseline for the cost, and A∗ with hp,x heuristic. For A∗, we also run ε-bounded relaxations of A∗ with different values of ε. In Figure 1 (left) we show the details for the best-performing model, the one using 20 buckets for discretization. We find that for those examples that do not require many changes, both A∗ and UCS traverse parts of the graph of similar sizes. When the number of nodes that need to be traversed gets larger, the speed-up of A∗ becomes more prominent. Moreover, increasing ε weight significantly speeds up the search, e.g., by two orders of magnitude for ε=5. Table 3, Appendix C presents some of the obtained adversarial examples and the corresponding feature transformations.

In this paper we have proposed a graphical framework to formalize evasion attacks in discrete domains that casts existing attacks as instances of best-first search over a graph. In settings with a discrete input space X⊂Rm, and the adversary’s transformation cost being the Lp distance between examples, this framework obtains adversarial examples that incur minimal cost for the adversary with white-box knowledge. This method produces a focused pointwise robustness guarantee for a given model of adversarial capabilities. We evaluated the attack against a Twitter bot classifier, showing that it can produce adversarial examples within an ε-bound of the minimal adversarial cost, using significantly lower computational runtime than exhaustive search. We found that static ε-weighting gives a pessimistic optimality bound. More work is needed to produce tighter optimality bounds, e.g., applying other relaxations of A∗.

Appendix A Proof of Statement 2.1

Observe that if F(x)≠F(x′), the heuristic is equal to zero, and hence is trivially admissible. Indeed, it cannot overestimate CG(x′,x∗) due to the fact that ω(a,b)≥0 and CG(a,b)≥0 for any a,b∈V.

It is therefore sufficient to show that if F(x)=F(x′), the lower bound on adversarial robustness at x′ over S never overestimates CG(x′,x∗):

The first equality is by definition of rp (see Equation 4).

By triangle property of the Lp metric, the second inequality holds:

Hence, rp(x′)≤CG(x,x∗), which implies Equation 5, and concludes the proof.

Appendix B Details of the heuristic for linear models

Let the model be a linear model over the input space X=Rm, that is, ϕ(x)=x is an identity mapping. Then, rp is a distance from a point x∈Rm to the linear decision hyperplane defined by the discriminant function f(x)=w⊺x+b: