In this article, we first propose the modified Hannan-Rissanen Method for estimating the parameters of the autoregressive moving average (ARMA) process with symmetric stable noise and symmetric stable generalized autoregressive conditional heteroskedastic (GARCH) noise. Next, we propose the modified empirical characteristic function method for the estimation of GARCH parameters with symmetric stable noise. Further, we show the efficiency, accuracy, and simplicity of our methods through Monte-Carlo simulation. Finally, we apply our proposed methods to model financial data. 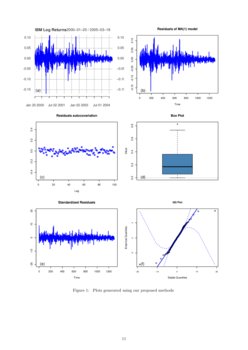 In this article, we introduce and study a one sided tempered stable auto...
Niharika Bhootna, et al. ∙

Stable distribution is one of the attractive models that well describes ...
Shinji Kakinaka, et al. ∙

On estimation of quadratic variation for multivariate pure jump semimartingales

In this paper we present the asymptotic analysis of the realised quadrat...
Johannes Heiny, et al. ∙

In finance and econometrics, important information about past market movements is modelled through the conditional distribution of return data series using the autoregressive moving average (ARMA) models. However, in these models, the conditional distribution is assumed to be homoskedastic which poses challenges in the modelling and analysis of returns with time-varying volatility and volatility clustering, a commonly observed phenomena. This led to the development of autoregressive conditional heteroskedastic (ARCH) and generalized ARCH (GARCH) models introduced by Engle [1] and Bollerslev [2] respectively. In empirical finance, the most important and widely used model is the combination of ARMA with GARCH, referred to as an ARMA-GARCH model (see [15], [16]).

In general, the noise term of ARMA, GARCH and ARMA-GARCH models is assumed to be normal or Student-t

distribution, where the normal distribution is known for the desirable property of stability but fails to capture the heavy-tailedness of the data. On the other hand, the Student-

[13]. Hence, there is a need to explore the behaviour of ARMA, GARCH and ARMA-GARCH models with stable noise for effective modelling of the return data series which also involves estimation of the parameters of these models, and only a handful of estimation techniques based on stable noise are available. For details on the different estimation techniques used for such models, see [14]. Therefore, we feel that this article is an important contribution to the literature available on these models.

In this article, we develop a method for estimating the parameters of ARMA model with symmetric stable noise and symmetric stable GARCH noise by modifying the Hannan-Rissanen Method [11]. For the estimation of the GARCH parameters, we propose the modified empirical characteristic function method which is based on the method discussed in [6]. The efficiency and effectiveness of the two proposed methods is validated through Monte Carlo simulation. For comparative analysis, we compare the modified Hannan-Rissanen method with the first two of the three specifc M-estimators of the parameters of ARMA models with symmetric stable noise introduced by Cadler and Davis [3], namely, the least absolute deviation (LAD) estimator; the least squares (LS) estimator, and the maximum likelihood (ML) estimator. Amongst the three M-estimators, LAD is an excellent choice for estimating ARMA parameters with stable noise due to its robustness, computational simplicity and good asymptotic properties. Our method works at par with the LAD estimator both in terms of accuracy and computational simplicity.

, in his study on the Generalized Central Limit Theorem. Each distribution, in this class, is characterized by four parameters, namely

α, β, σ, and δ, which, respectively, denote the index of stability, skewness, scale and shift of the distribution. Their respective ranges are given by α∈(0,2], β∈[−1,1], σ>0 and δ∈R. For more details, see [8]. In this paper, we deal with symmetric stable distributions. We say that the distribution is symmetric around zero if and only if β=δ=0 and denote by SαS. The characteristic function (cf) representation is given by

For simulations, we assume σ=1 for SαS distribution throughout.

Next, we discuss some important definitions and notations required for parameter estimation of ARMA, GARCH and ARMA-GARCH models. Let ϕ=(ϕ1,⋯,ϕp) and θ=(θ1,⋯,θq)

Let the time series {Xt} be an ARMA(p,q) process with SαS noise, denoted by SαS-ARMA(p,q), if

denotes the noise sequence of iid random variables with

Let the time series {Xt} be a GARCH(p,q) process with SαS noise denoted by SαS-GARCH(p,q), if

where c>0, a and b are non-negative and {ϵt} denotes the noise sequence of iid random variables with SαS distribution with (cf) given in (1). It is known that the SαS-GARCH(1,1) process has a unique strictly stationary solution if b1+λa1<1 while SαS-GARCH(p,q) process with p≥2 or q≥2 has a unique strictly stationary solution if c>0 and λ∑qi=1ai+∑pj=1bj≤1. For further details and information on the approximate values of λ used for different values of α, see [4].

where c>0, aG and bG are non-negative and {ϵt} denotes the noise sequence of iid random variables with SαS distribution with (cf) given in (1) for α∈(1,2] and σ>0.

Note now that due to undefined covariance when α<2, the classical autocovariance function cannot be considered as a tool for developing methods of parameter estimation of the processes defined in (2) and (4). Thus, autocovariation (normalized) and autocodifference serves as a measure of dependence best suited for heavy-tailed distributions and processes. In our proposed method of estimating the parameters of the processes defined in (2) and (4), we make use of the normalized autocovariation. The normalized autocovariation (see [5]) for SαS process {Xt} with lag k is given by

and its estimator for a sample x1,⋯,xN being a realization of a stationary process {Xt} is given by

Let {Xt} be as defined in (2) or (4). We discuss the Modified Hannan-Rissanen (MHR) algorithm in three steps.

The proposed MHR method is both computationally efficient and nearly optimal in estimating the ARMA coefficients of (2) or (4). It is important to note that the MHR method does not require information (or estimation) of the parameters of noise distribution which is also true for LAD method. The effectiveness of the proposed method in comparison to other methods is shown in Section 4.

We employ this method to obtain the estimates of a, b and c for processes defined in (3) and (4). For simplicity, we shall discuss the method for the process defined in (3), for the case p=1 and q=1 relevant in empirical finance. The method can be extended to higher orders of p and q in a similar spirit. For p=1 and q=1 we get

where c>0, a1 and b1 are non-negative satisfying the stationary condition λa1+b1<1 and {ϵt} denotes the noise sequence of iid random variables with SαS distribution. The parameter estimates for (10) are obtained by minimizing the function f over c, a1 and b1 defined as

where ^ϵj=Xjc+a1|Xj−1|+b1σ′j−1, ψtheoretical(^ϵj)=exp(−|^ϵj|^α), ψempirical(^ϵj)=1n∑nj=1cos(^ϵjYj) where Y1,⋯,Yn are iid random variables with S^αS distribution and ^α is the estimate of α obtained from the noise sequence of iid random variables with SαS distribution using the hybrid method discussed in [8]. We make use of the function “optim” available in “stats” package of R for the minimization of the function f over c, a1 and b1. The method used is “L-BFGS-B” introduced by Byrd et al. [9].

For the comparative analysis, we investigate the performance of LAD, LS and MHR for the estimation of the parameters of the processes defined in (2) and (4). The parameters of the process defined in (3) are obtained using MECF discussed in Section 3.2. We consider four models to check the efficiency of our proposed method for (2) and (4) in comparison to LAD and LS through Monte Carlo simulations.

Tables 4 and 4 show the accuracy and efficiency of the proposed MHR method and the MECF used in obtaining the estimate of θ1 and (c,a1,b1) respectively for model (M3). The estimate of α for this model is obtained from the SαS noise sequence {ϵt} using the hybrid method.

We observe that for all the four models (M1), (M2), (M3) and (M4), the least squares method (LS) performs the worst while the least absolute deviation (LAD) and the proposed modified Hannan-Rissanen method (MHR) are at par with each other in terms of the robustness, accuracy and efficiency of the estimates. The estimates of the GARCH parameters obtained via MECF are also precise and accurate.

The time series real dataset that we have considered is the International Business Machines Corporation (IBM) obtained from Yahoo Finance for the period January 19, 2000 - March 19, 2005, comprising of 1297 daily log returns values of the adjusted closing price. From Figure 1

(a) , we observe the presence of time varying volatility of the log returns of the time series with mean almost zero and the minimum and maximum approximately around zero. The kurtosis is 5.8164 while the skewness is -0.030 which implies the distribution of the log returns is fairly symmetrical with heavier tails than the normal. These characteristics thereby suggest the application of ARMA(

pA,qA)-SαS-GARCH(pG,qG) model to the given dataset. To determine whether the considered time series data is stationary, we implement the Augmented Dickey-Fuller Test (ADF) “adf.test” available in the “tseries” package in R. The p-value obtained is 0.01 which confirms the stationarity of the data. We first try to implement the ARMA(pA,qA) model and check whether it fits the dataset well. In order to select the best order for fitting an ARMA(pA,qA) model according to either AIC (Akaike Information Criterion) or BIC (Bayesian Information Criterion), we make use of “auto.arima” available in the package “forecast” in R. The best model chosen by “auto.arima” was MA(1) model and we assume that the residuals obtained from this model constitute a sample from SαS distribution. Thus, we can employ the MHR method to obtain the estimate ^θ1=−0.078.

. The KS test statistics is defined as:

denote the empirical cumulative distribution function for Sample 1 and Sample 2 respectively, both of length

n. The test derived from the KS statistics is called the two sample KS test. In our case, Samples 1 and 2 are the residuals and the random sample simulated from SαS distribution with estimated parameters corresponding to the residuals respectively. Finally, we obtain 100 pvalues of the test and create a boxplot as shown in Figure 1 (d). Assuming 0.05 confidence level, we fail to reject the hypothesis that the samples are from the same distribution.

However, from the residuals plot of MA(1) with SαS noise, we observe that the volatility decays with time, thereby suggesting the replacement of SαS noise with SαS-GARCH(1,1) noise in the SαS-MA(1) model. Therefore, we will build MA(1)-SαS-GARCH(1,1) model. For the given time series, the initial values of c, a1 and b1 is considered to be 0.001, 0.1 and 0.8 respectively to obtain the estimates. The GARCH(1,1) estimated parameters obtained after employing MECF are given in Table 7.

To conclude, we make the following observations in relation to our proposed methods.