We present a new trace estimator of the matrix whose explicit form is not given but its matrix multiplication to a vector is available. The form of the estimator is similar to the Hutchison stochastic trace estimator, but instead of the random noise vectors in Hutchison estimator, we use small number of probing vectors determined by machine learning. Evaluation of the quality of estimates and bias correction are discussed. An unbiased estimator is proposed for the calculation of the expectation value of a function of traces. In the numerical experiments with random matrices, it is shown that the precision of trace estimates with O(10) probing vectors determined by the machine learning is similar to that with O(10000) random noise vectors. 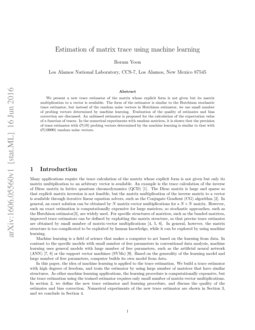 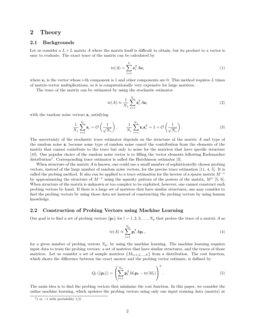 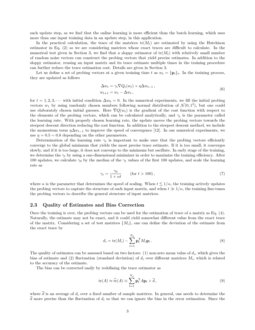 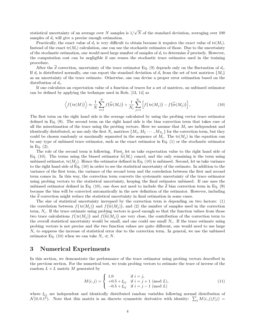 We propose an approach to the estimation of infinite sets of random vect...
Anatoli Torokhti, et al. ∙

The scalable calculation of matrix determinants has been a bottleneck to...
Jack Fitzsimons, et al. ∙

Probing is a general technique that is used to reduce the variance of th...
Heather Switzer, et al. ∙

Many applications require the trace calculation of the matrix whose explicit form is not given but only its matrix multiplication to an arbitrary vector is available. An example is the trace calculation of the inverse of Dirac matrix in lattice quantum chromodynamics (QCD) [1]. The Dirac matrix is large and sparse so that explicit matrix inversion is not feasible, but the matrix multiplication of the inverse matrix to a vector is available through iterative linear equation solvers, such as the Conjugate Gradient (CG) algorithm [2]. In general, an exact solution can be obtained by N matrix-vector multiplications for a N×N matrix. However, such an exact estimation is computationally expensive for large matrices, so stochastic approaches, such as the Hutchison estimator[3], are widely used. For specific structures of matrices, such as the banded matrices, improved trace estimators can be defined by exploiting the matrix structure, so that precise trace estimates are obtained by small number of matrix-vector multiplications [4, 5, 6]. In general, however, the matrix structure is too complicated to be exploited by human knowledge, while it can be explored by using machine learning.

or the support vector machines (SVMs)

[9]. Based on the generality of the learning model and large number of free parameters, computer builds its own model from data.

Let us consider a L×L matrix A where the matrix itself is difficult to obtain, but its product to a vector is easy to evaluate. The exact trace of the matrix can be calculated by

where ei is the vector whose i-th component is 1 and other components are 0. This method requires L times of matrix-vector multiplications, so it is computationally very expensive for large matrices.

The main idea is to find the probing vectors that minimize the cost function. In this paper, we consider the online machine learning, which updates the probing vectors using only one input training data (matrix) at each update step, as we find that the online learning is more efficient than the batch learning, which uses more than one input training data in an update step, in this application.

In the practical calculation, the trace of the matrices tr(Mt) are estimated by using the Hutchison estimator in Eq. (2) as we are considering matrices whose exact traces are difficult to calculate. In the numerical test given in Section 3, we find that a sloppy estimator of tr(Mt) with relatively small number of random noise vectors can construct the probing vectors that yield precise estimates. In addition to the sloppy estimator, reusing an input matrix and its trace estimate multiple times in the training procedure can further reduce the trace estimation cost. Details are given in Section 3.

Let us define a set of probing vectors at a given training time t as wt={pl}t. In the training process, they are updated as follows

for t=1,2,3,⋯ with initial condition Δw0=0. In the numerical experiments, we fill the initial probing vectors w1

N(0,12), but one could use elaborately chosen initial guesses. Here ∇Q(wt) is the gradient of the cost function with respect to the elements of the probing vectors, which can be calculated analytically, and γt is the parameter called the learning rate. With properly chosen learning rate, the update moves the probing vectors towards the steepest descent direction reducing the cost function. In addition to the steepest descent method, we include the momentum term ηΔwt−1 to improve the speed of convergence [12]. In our numerical experiments, we use η=0.5∼0.8 depending on the other parameters.

Determination of the learning rate γt is important to make sure that the probing vectors efficiently converge to the global minimum that yields the most precise trace estimate. If it is too small, it converges slowly, and if it is too large, it does not converge to the minimum but oscillate. In early stage of the training, we determine the γt by using a one-dimensional minimizer in order to maximize the training efficiency. After 100 updates, we calculate γ0 by the median of the γt values of the first 100 updates, and scale the learning rate as

2.3 Quality of Estimates and Bias Correction

The quality of estimates can be assessed based on two factors: (1) non-zero mean value of di

, which gives the bias of estimate and (2) fluctuation (standard deviation) of

di over different matrices Mi, which is related to the accuracy of the estimate.

where ¯¯¯d is an average of di over a fixed number of sample matrices. In general, one needs to determine the ¯¯¯d more precise than the fluctuation of di so that we can ignore the bias in the error estimation. Since the statistical uncertainty of an average over N samples is 1/√N of the standard deviation, averaging over 100 samples of di will give a precise enough estimation.

If one calculates an expectation value of a function of traces for a set of matrices, an unbiased estimator can be defined by applying the technique used in Refs. [13, 14] as

The first term on the right hand side is the average calculated by using the probing vector trace estimator defined in Eq. (9). The second term on the right hand side is the bias correction term that takes care of all the misestimation of the trace using the probing vectors. Here we assume that Mi are independent and identically distributed, so use only the first Nc matrices {M1,M2⋯,MNc} for the correction term, but they could be chosen randomly or maximally separated in the sequence of Mi. The tr(Mj) in the equation can be any type of unbiased trace estimator, such as the exact estimator in Eq. (1) or the stochastic estimator in Eq. (2).

The role of the second term is following. First, let us take expectation value to the right hand side of Eq. (10). The terms using the biased estimator ˜tr(Mi) cancel, and the only remaining is the term using unbiased estimator, tr(Mj). Hence the estimator defined in Eq. (10

) is unbiased. Second, let us take variance to the right hand side of Eq. (

The size of statistical uncertainty increased by the correction term is depending on two factors: (1) the correlation between f(tr(Mj)) and f(˜tr(Mj)), and (2) the number of samples used in the correction term, Nc. If the trace estimate using probing vectors is good enough so that the function values from those two trace calculations f(tr(Mj)) and f(˜tr(Mj)) are very close, the contribution of the correction term to the overall statistical uncertainty would be small, and one could use small Nc. If the trace estimate using probing vectors is not precise and the two function values are quite different, one would need to use large Nc to suppress the increase of statistical error due to the correction term. In general, we use the unbiased estimator Eq. (10) when we can take Nc≪N.

In this section, we demonstrate the performance of the trace estimator using probing vectors described in the previous section. For the numerical test, we train probing vectors to estimate the trace of inverse of the random L×L matrix M generated by

N(0,0.12). Note that this matrix is an discrete symmetric derivative with identity: ∑jM(i,j)f(j)=12(f(i−1)−f(i+1))+f(i), except the Gaussian noise. It has the similar form with the Dirac operator in Lattice QCD [15, 16]. This is a sparse matrix whose inverse is expensive to calculate, but the matrix-vector product of the inverse matrix can be calculated by using iterative methods. In this numerical test, we use BiCGSTAB algorithm[17] to evaluate the product of the inverse matrix M−1 and an arbitrary vector.

We test two different sizes of matrices: L=100 and 1000. Note that the training requires input matrices that have similar structures and the traces of each matrix. Although it is possible to use the exact trace calculations on those sizes of matrices we are testing in this section, we use estimates from the Hutchison estimator Eq. (2) for the traces of the input matrices so that the results are scalable to larger size matrices, whose exact traces are very expensive to calculate. The traces of inverse matrices are 70.92 ± 0.07 and 709.20 ± 0.22 for L=100 and 1000, respectively. The numbers after “±” notation are the standard deviation of the traces of random matrices. Unless explicitly noted, the discussion in this section is using the training parameters given in Table 1.

We thank Garrett Kenyon for discussions on machine learning algorithms. This research used resources of the Institutional Computing at Los Alamos National Laboratory, and the Oak Ridge Leadership Computing Facility at the Oak Ridge National Laboratory, which is supported by the Office of Science of the U.S. Department of Energy under Contract No. DE-AC05-00OR22725. This work is supported by the U.S. Department of Energy, Office of Science, Office of High Energy Physics under Contract No. DE-KA-1401020, and the LANL LDRD program.