Let the Ornstein-Uhlenbeck process (X_t)_t>0 driven by a fractional Brownian motion B^H, described by dX_t = -θ X_t dt + σ dB_t^H be observed at discrete time instants t_k=kh, k=0, 1, 2, ..., 2n+2. We propose ergodic type statistical estimators θ̂_n, Ĥ_n and σ̂_n to estimate all the parameters θ, H and σ in the above Ornstein-Uhlenbeck model simultaneously. We prove the strong consistence and the rate of convergence of the estimators. The step size h can be arbitrarily fixed and will not be forced to go zero, which is usually a reality. The tools to use are the generalized moment approach (via ergodic theorem) and the Malliavin calculus. 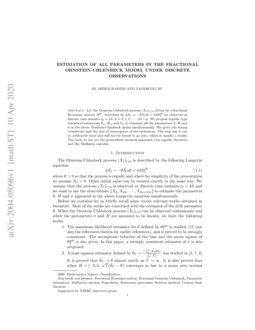 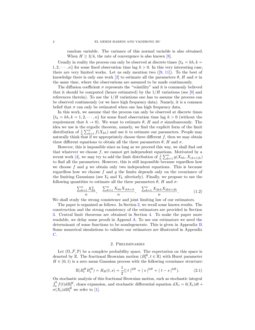 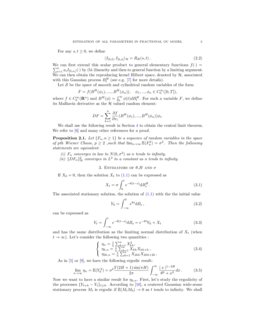 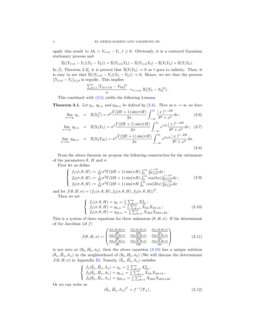 The Ornstein-Uhlenbeck process (Xt)t≥0 is described by the following Langevin equation:

where θ>0 so that the process is ergodic and where for simplicity of the presentation we assume X0=0. Other initial value can be treated exactly in the same way. We assume that the process (Xt)t≥0 is observed at discrete time instants tk=kh and we want to use the observations {Xh,X2h,⋯,X2n+2)h} to estimate the parameters θ, H and σ appeared in the above Langevin equation simultaneously.

Before we continue let us briefly recall some recent relevant works obtained in literature. Most of the works are concerned with the estimator of the drift parameter θ. When the Ornstein-Uhlenbeck process (Xt)t≥0 can be observed continuously and when the parameters σ and H are assumed to be known, we have the following works.

Usually in reality the process can only be observed at discrete times {tk=kh,k=1,2,⋯,n} for some fixed observation time lag h>0. In this very interesting case, there are very limited works. Let us only mention two ([8, 11]). To the best of knowledge there is only one work [2] to estimate all the parameters θ, H and σ in the same time, where the observations are assumed to be made continuously.

The diffusion coefficient σ represents the “volatility” and it is commonly believed that it should be computed (hence estimated) by the 1/H variations (see [6] and references therein). To use the 1/H variations one has to assume the process can be observed continuously (or we have high frequency data). Namely, it is a common belief that σ can only be estimated when one has high frequency data.

In this work, we assume that the process can only be observed at discrete times {tk=kh,k=1,2,⋯,n} for some fixed observation time lag h>0 (without the requirement that h→0). We want to estimate θ, H and σ simultaneously. The idea we use is the ergodic theorem, namely, we find the explicit form of the limit distribution of 1n∑nk=1f(Xkh) and use it to estimate our parameters. People may naturally think that if we appropriately choose three different f, then we may obtain three different equations to obtain all the three parameters θ, H and σ.

However, this is impossible since as long as we proceed this way, we shall find out that whatever we choose f, we cannot get independent equations. Motivated by a recent work [4], we may try to add the limit distribution of 1n∑nk=1g(Xkh,X(k+1)h) to find all the parameters. However, this is still impossible because regardless how we choose f and g we obtain only two independent equations. This is because regardless how we choose f and g the limits depends only on the covariance of the limiting Gaussians (see Y0 and Yh ulteriorly). Finally, we propose to use the following quantities to estimate all the three parameters θ, H and σ:

We shall study the strong consistence and joint limiting law of our estimators.

The paper is organized as follows. In Section 2, we recall some known results. The construction and the strong consistency of the estimators are provided in Section 3. Central limit theorems are obtained in Section 4. To make the paper more readable, we delay some proofs in Append A. To use our estimators we need the determinant of some functions to be nondegenerate. This is given in Appendix B. Some numerical simulations to validate our estimators are illustrated in Appendix C.

be a complete probability space. The expectation on this space is denoted by

On stochastic analysis of this fractional Brownian motion, such as stochastic integral ∫baf(t)dBHt, chaos expansion, and stochastic differential equation dXt=b(Xt)dt+σ(Xt)dBHt we refer to [1].

We can first extend this scalar product to general elementary functions f(⋅)=∑ni=1aiI[0,si](⋅) by (bi-)linearity and then to general function by a limiting argument. We can then obtain the reproducing kernel Hilbert space, denoted by H, associated with this Gaussian process BHt (see e.g. [7] for more details).

where f∈C∞b(Rn) and BH(ϕ)=∫∞0ϕ(t)dBHt. For such a variable F, we define its Malliavin derivative as the H valued random element:

We shall use the following result in Section 4 to obtain the central limit theorem. We refer to [9] and many other references for a proof.

Let {Fn,n≥1} be a sequence of random variables in the space of pth Wiener Chaos, p≥2 ,such that limn→∞E(F2n)=σ2. Then the following statements are equivalent:

The associated stationary solution, the solution of (1.1) with the the initial value

can be expressed as

This combined with (3.9) yields the following Lemma.

From the above theorem we propose the following construction for the estimators of the parameters θ, H and σ.

This is a system of three equations for three unknowns (θ,H,σ). If the determinant of the Jacobian (of f)

Or we can write as

It seems hard to explicitly obtain the explicit solution of the system of equation (3.14). However, it is a classical algebraic equations. There are numerous numeric approaches to find the approximate solution. We shall give some validation of our estimators numerically in Appendix C.

Since f is a continuous function of (θ,H,σ) the inverse function f−1 is also continuous if it exists. Thus we have the following a strong consistency result which is an immediate consequence of Theorem 3.1.

In this section, we shall concern with the central limit theorem associated with our ergodic estimator (~θn,~Hn,~σn). We shall prove that √n(~θn−θ,~Hn−H,~σn−σ)

converge in law to a mean zero normal vector.

Our first goal is to show that Fn converges in law to a multivariate normal distribution using Proposition 2.1. So we consider a linear combination:

and show that it converges to a normal distribution.

We will use the following Feynman diagram formula [9], where interested readers can find a proof.

An immediate consequence of this result is

where Σ=(Σ(i,j))1≤i,j≤3 is a symmetric matrix whose elements are given by

where Σn is a symmetric 3×3 matrix given by

It is easy to observe that

Now let consider the limit of Σn(1,2). From the definitions (3.8) and from Proposition 4.2 it follows

Using Lemma A.4, we know that Jn:=⟨DGn,DGn⟩H converges to a constant. Then by Proposition 2.1, we know Gn converges in law to a normal random variable.

Now using the delta method and the above Theorem 4.3 we immediately have the following theorem.

Let Xt be the Ornstein-Uhlenbeck process defined by (1.1). Then

The above inequality also holds true for Yt.

Proof  To simplify notations we shall use Xk, Yk to represent Xkh, Ykh etc. From the relation (3.7) it is easy to see that

Exactly in the same way we have

When i=4, we have easily

When one of the i or j is not equal to 1, we have by the Hölder inequality