Estimating the distribution of Galaxy Morphologies on a continuous space

The incredible variety of galaxy shapes cannot be summarized by human defined discrete classes of shapes without causing a possibly large loss of information. Dictionary learning and sparse coding allow us to reduce the high dimensional space of shapes into a manageable low dimensional continuous vector space. Statistical inference can be done in the reduced space via probability distribution estimation and manifold estimation. 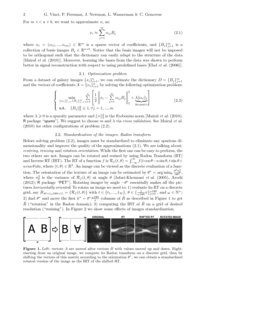 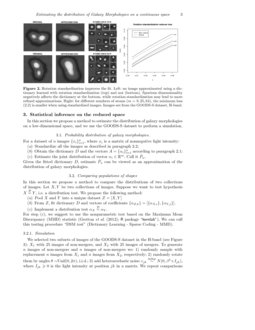 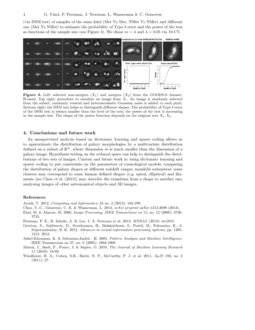 The evolution of the Universe has led to the formation of complex objects apparently without any regular shape, which our mind would just classify as

irregular. Thus, the incredible variety of galaxy shapes cannot be summarized by human defined discrete classes of shapes (e.g. “Hubble sequence”) without causing a possibly large loss of information. Our human concept of shape could limit the complete understanding of the complex structure of the galaxies. Estimating the distribution of galaxy morphologies is one means to test theories of the formation and the evolution of the Universe. We estimate the distribution of morphologies on a continuous Euclidean space, such that a particular shape will be viewed as a point in a continuous space. This task must be performed in an unsupervised

way, i.e. free from any human judgement. Galaxy images are intrinsically high-dimensional data, and we use

dictionary learning and sparse coding [[Mairal  (2010)]] to reduce the high dimensional space of shapes into a manageable low dimensional one. Essentially, galaxy images will be approximated by sparse linear combinations of basis pictures, which are learned from the data. Statistical inference on the reduced space can be performed via probability distribution estimation. We propose a testing procedure and analyse a dataset of galaxy images111GOODS-South Early Release Science Field dataset observed in the near-infrared regime by the Wide Field Camera 3 on-board the Hubble Space Telescope [see [Windhorst  (2011), Freeman  (2013)]]. to show some examples.

The general idea of dictionary learning and sparse coding is to approximate images by sparse linear combinations of a fixed number of basis images, which are not predefined, but are learned from the data. Let xi∈Ra×b be an image, which has a×b dimensions. For m<<a×b, we want to approximate xi as:

where αi=(αi1,...,αim)∈Rm is a sparse vector of coefficients, and {Bj}mj=1 is a collection of basis images Bj∈Ra×b. Notice that the basis images will not be imposed to be orthogonal such that the dictionary can easily adapt to the structure of the data [[Mairal  (2010)]]. Moreover, learning the bases from the data was shown to perform better in signal reconstruction with respect to using predefined bases [[Elad  (2006)]].

From a dataset of galaxy images {xi}ni=1, we can estimate the dictionary D={Bj}mj=1 and the vectors of coefficients A={αi}ni=1 by solving the following optimization problem:

2.2 Standardization of the images. Radon transform

Before solving problem (2), images must be standardized to eliminate any spurious dimensionality and improve the quality of the approximations (1). We are talking about: centring, resizing and rotation orientation. While the first one can be easy to perform, the two others are not. Images can be rotated and resized by using Radon Transform (RT) and Inverse RT (IRT). The RT of a function f is Rf(t,θ)=∫∞−∞f(tcosθ−usinθ,tsinθ+ucosθ)du, where (t,θ)∈R2. An image can be viewed as the discrete evaluation of a function. The orientation of the texture of an image can be estimated by θ∗=argminθ∂2σ2θ∂θ2, where σ2θ

is the variance of

3 Statistical inference on the reduced space

In this section we propose a method to estimate the distribution of galaxy morphologies on a low-dimensional space, and we use the GOODS-S dataset to perform a simulation.

For a dataset of n images {xi}ni=1, where xi is a matrix of nonnegative light intensity:

Given the fitted dictionary D, estimate ^Pα can be viewed as an approximation of the distribution of galaxy morphologies.

For step (c), we suggest to use the nonparametric test based on the Maximum Mean Discrepancy (MMD) statistic ([Gretton  (2012)]; R package “kernlab”). We can call this testing procedure “DSM test” (Dictionary Learning - Sparse Coding - MMD).

ϵjkindep∼N(0,β2×Ijk), where Ijk≥0 is the light intensity at position jk

in a matrix. We repeat comparisons (via DSM test) of samples of the same kind (Mer Vs Mer, NMer Vs NMer) and different one (Mer Vs NMer) to estimate the probability of Type I error and the power of the test as functions of the sample size (see Figure

An unsupervised analysis based on dictionary learning and sparse coding allows us to approximate the distribution of galaxy morphologies by a multivariate distribution defined on a subset of Rm, where dimension m is much smaller than the dimension of a galaxy image. Hypothesis testing on the reduced space can help to distinguish the distributions of two sets of images. Current and future work is: using dictionary learning and sparse coding to put constraints on the parameters of cosmological models; comparing the distribution of galaxy shapes at different redshift ranges; manifold estimation: some clusters may correspond to some human defined shapes (e.g. spiral, elliptical) and filaments [see [Chen  (2013)]] may describe the transition from a shape to another one; analysing images of other astronomical objects and 3D images.