Estimating Diffusion With Compound Poisson Jumps Based On Self-normalized Residuals

This paper considers parametric estimation problem of the continuous part of a jump dif- fusion model. The threshold based method was previously proposed in various papers, which enables us to distinguish whether observed increments have jumps or not, and to estimate unknown parameters. However, a data-adapted and quantitative choice of the threshold parameter is a subtle and sensitive problem, and still remains as a tough problem. In this paper, we propose a new and simple alternative based on the Jarque-Bera normality test, which makes us to attain the above two things without any sensitive fine tuning. We show that under suitable conditions the proposed estimator has a consistency property. Some numerical experiments are conducted. 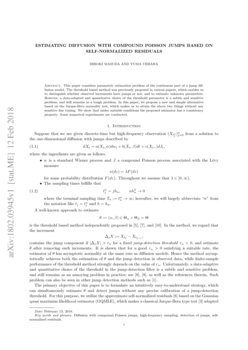 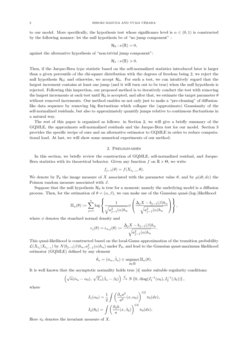 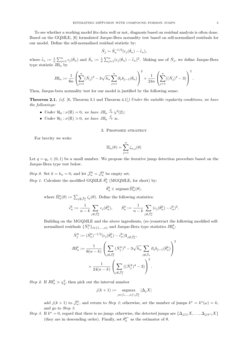 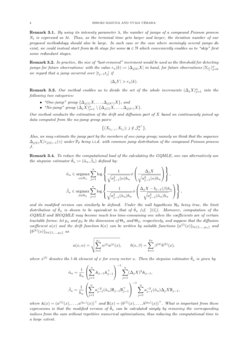 Assessing, testing and estimating the amount of fine-tuning by means of active information

where the ingredients are given as follows.

A well-known approach to estimate

is the threshold based method independently proposed in [5], [7], and [10]. In the method, we regard that the increment

contains the jump component if |ΔjX|>rn for a fixed jump-detection threshold rn>0, and estimate θ after removing such increments. It is shown that for a good rn>0 satisfying a suitable rate, the estimator of θ has asymptotic normality at the same rate as diffusion models. Hence the method asymptotically achieves both the estimation of θ and the jump detection in observed data, while finite-sample performance of the threshold method strongly depends on the value of rn. Unfortunately, a data-adaptive and quantitative choice of the threshold in the jump-detection filter is a subtle and sensitive problem, and still remains as an annoying problem in practice; see [8], [9], as well as the references therein. Such problem can also be seen in other jump detection methods such as [1].

The primary objective of this paper is to formulate an intuitively easy-to-understand strategy, which can simultaneously estimate θ and detect jumps without any precise calibration of a jump-detection threshold. For this purpose, we utilize the approximate self-normalized residuals [6] based on the Gaussian quasi maximum likelihood estimator (GQMLE), which makes a classical Jarque-Bera type test [3] adapted to our model. More specifically, the hypothesis test whose significance level is α∈(0,1)

is constructed by the following manner: let the null hypothesis be of “no jump component” :

against the alternative hypothesis of “non-trivial jump component”:

Then, if the Jarque-Bera type statistic based on the self-normalized statistics introduced later is larger than a given percentile of the chi-square distribution with the degrees of freedom being

2, we reject the null hypothesis H0; and otherwise, we accept H0. For such a test, we can intuitively regard that the largest increment contains at least one jump (and it will turn out to be true) when the null hypothesis is rejected. Following this inspection, our proposed method is to iteratively conduct the test with removing the largest increments at each test until H0 is accepted, and after that, we estimate the target parameter θ without removed increments. Our method enables us not only just to make a “pre-cleaning” of diffusion-like data sequence by removing big fluctuations which collapse the (approximate) Gaussianity of the self-normalized residuals, but also to approximately quantify jumps relative to continuous fluctuations in a natural way.

The rest of this paper is organized as follows: in Section 2, we will give a briefly summary of the GQMLE, the approximate self-normalized residuals and the Jarque-Bera test for our model. Section 3 provides the specific recipe of ours and an alternative estimator to GQMLE in order to reduce computational load. At last, we will show some numerical experiments of our method.

In this section, we briefly review the construction of GQMLE, self-normalized residual, and Jarque-Bera statistics with its theoretical behavior. Given any function f on R×Θ, we write

Suppose that the null hypothesis H0

is true for a moment; namely the underlying model is a diffusion process. Then, for the estimation of

where ϕ denotes the standard normal density and

It is well known that the asymptotic normality holds true [4] under suitable regularity conditions:

Then, Jarque-bera normality test for our model is justified by the following sense:

(cf. [6, Theorem 3.1 and Theorem 4.1]) Under the suitable regularity conditions, we have the followings:

For brevity we write

Let q=qn∈(0,1) be a small number. We propose the iterative jump detection procedure based on the Jarque-Bera type test below.

By using its intensity parameter λ, the number of jumps of a compound Poisson process Nt is expressed as λt. Thus, as the terminal time gets larger and larger, the iteration number of our proposed methodology should also be large. In such case or the case where seemingly several jumps do exist, we could instead start from m-th stage for some m∈N which conveniently enables us to “skip” first some redundant stages.

Our method enables us to divide the set of the whole increments (ΔjX)nj=1 into the following two categories:

Our method conducts the estimation of the drift and diffusion part of X based on continuously joined up data computed from the no-jump group pairs:

Also, we may estimate the jump part by the members of one-jump group; namely we think that the sequence Δj(k)X/cj(k)−1(γ) under Pθ being i.i.d. with common jump distribution of the compound Poisson process J.

To reduce the computational load of the calculating the GQMLE, one can alternatively use the stepwise estimator ~θn:=(~αn,~βn) defined by:

and its modified version can similarly be defined. Under the null hypothesis H0 being true, the limit distribution of ~θn is shown to be equivalent to that of ^θn (cf. [11]). Moreover, computation of the GQMLE and MGQMLE may become much less time-consuming one when the coefficients are of certain tractable forms: let pα and pβ be the dimension of Θα and Θβ, respectively, and suppose that the diffusion coefficient a(x) and the drift function b(x) can be written by suitable functions {a(l)(x)}l∈{1,…,pα} and {b(k)(x)}k∈{1,…,pβ} as

where x(l) denotes the l-th element of x

x. Then the stepwise estimator ~θn is given by

where A(x)=(a(1)(x),…,a(pα)(x))⊤ and B(x)=(b(1)(x),…,b(pβ)(x))⊤. What is important from these expressions is that the modified version of ~θn can be calculated simply by removing the corresponding indices from the sum without repetitive numerical optimizations, thus reducing the computational time to a large extent.

4. Asymptotic property of the MGQMLE

In this section, we look at the asymptotic properties of the MGQMLE for the following toy model:

where J is a compound Poisson process expressed as

In this expression, N and {ξi}i∈N denote a Poisson process whose intensity parameter is λ

and i.i.d random variables, respectively. Recall that the observations

The following theorem ensures a consistency property of the MGQMLE:

If Assumption 4.1 holds, then we have

We consider the following SDE model:

Here, we set number of jumps fixed just for numerical comparison purpose. Then the performance of our method is given in the table 1.

The transition of our estimators and the logarithmic values of the JB statistic in the last iteration are shown in Figures 3-3. As can be seen from Table 1

1/λ, it follows that

For convenience, we hereafter write

Hereafter we use the following notations:

For every j, we write ηj=Δjw√hn. Then we have

Therefore it suffices to show that

Lemma 6.2 implies that all increments containing jumps are correctly picked up as long as 1≤NTn≤kn. Similarly, we can derive

We introduce the following events:

Taking the lemmas into consideration, we can split P(Akn,n,ϵ) as

First we focus on the estimate of P2,n. By virtue of the foregoing discussion, we have the following expression:

Hence it follows that

The law of large numbers for triangular sequences implies that

and the central limit theorem, it follows that

Hence if kn−λTn√λTn→∞, we have