In this paper, we develop a formula for estimating Bayes factors from repeated measures ANOVA designs. The formula, which requires knowing only minimal information about the ANOVA (e.g., the F -statistic), is based on the BIC approximation of the Bayes factor, a common default method for Bayesian computation with linear models. In addition to several computational examples, we report a simulation study in which we demonstrate that despite its simplicity, our formula compares favorably to a recently developed, more complex method that accounts for correlation between repeated measurements. Our method provides a simple way for researchers to estimate Bayes factors from a minimal set of summary statistics, giving users a powerful index for estimating the evidential value of not only their own data, but also the data reported in published studies. 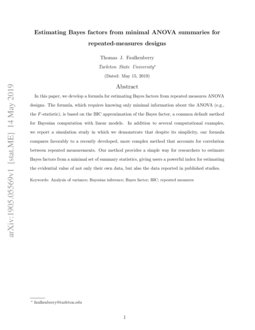 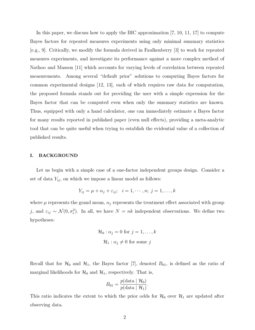 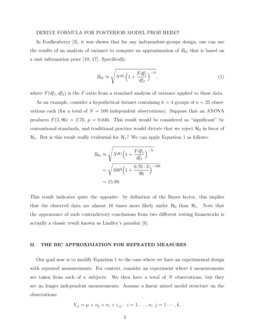 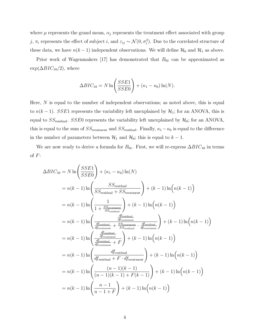 Let us begin with a simple case of a one-factor independent groups design. Consider a set of data Yij, on which we impose a linear model as follows:

where μ represents the grand mean, αj represents the treatment effect associated with group j, and εij∼N(0,σ2ε). In all, we have N=nk independent observations. We define two hypotheses:

Recall that for H0 and H1, the Bayes factor (Kass and Raftery, 1995), denoted B01, is defined as the ratio of marginal likelihoods for H0 and H1, respectively. That is,

This ratio indicates the extent to which the prior odds for

H0 over H1 are updated after observing data.

In Faulkenberry (2018), it was shown that for any independent-groups design, one can use the results of an analysis of variance to compute an approximation of B01 that is based on a unit information prior (Wagenmakers, 2007; Masson, 2011). Specifically

where F(df1,df2) is the F-ratio from a standard analysis of variance applied to these data.

As an example, consider a hypothetical dataset containing k=4 groups of n=25 observations each (for a total of N=100 independent observations). Suppose that an ANOVA produces F(3,96)=2.76, p=0.046. This result would be considered as “significant” by conventional standards, and traditional practice would dictate that we reject H0 in favor of H1. But is this result really evidential for H1? We can apply Equation 1 as follows:

This result indicates quite the opposite: by definition of the Bayes factor, this implies that the observed data are almost 16 times more likely under H0 than H1. Note that the appearance of such contradictory conclusions from two different testing frameworks is actually a classic result known as Lindley’s paradox (Lindley, 1957).

Our goal now is to modify Equation 1 to the case where we have an experimental design with repeated measurements. For context, consider an experiment where k measurements are taken from each of n subjects. We then have a total of N

observations, but they are no longer independent measurements. Assume a linear mixed model structure on the observations:

where μ represents the grand mean, αj represents the treatment effect associated with group j, πi represents the effect of subject i, and εij∼N(0,σ2ε). Due to the correlated structure of these data, we have n(k−1) independent observations. We will define H0 and H1 as above.

Prior work of Wagenmakers (2007) has demonstrated that B01 can be approximated as exp(ΔBIC10/2), where

We are now ready to derive a formula for B01. First, we will re-express ΔBIC10 in terms of F:

Thus, we can write

If we invert the term containing F and divide n−1 into the resulting numerator, we get the following formula:

Applying Equation 1 gives us the following:

. This provides overwhelming support for the presence of an effect of physical/numerical congruity on median response times. Converting the Bayes factor to a posterior model probability, we also see incredible evidence for

of response times to a parametric model

(i.e., the shifted Wald distribution; see Anders et al., 2016; Faulkenberry, 2017, for details), allowing them to investigate the effects of congruity on shape, scale, and location of the response time distributions. Specifically, they predicted that the leading edge, or shift, of the distributions would not differ between congruent and incongruent trials, thus providing support against an early encoding-based explanation of the observed size-congruity effect (Santens and Verguts, 2011; Faulkenberry et al., 2016; Sobel et al., 2016, 2017). The shift parameter was calculated for both of the k=2 congruity conditions for each of the n=23 subjects. The resulting ANOVA summary table is presented in Table 2

Applying Equation 1 gives us the following:

This Bayes factor tells us that the observed data are approximately 2.4 times more likely under H0 than H1. Converting the Bayes factor to a posterior model probability, we also see positive evidence for H0:

In a recent paper, Nathoo and Masson (2016) took a slightly different approach to the problem we have , investigating the role of effective sample size in repeated measures designs (Jones, 2011). For single-factor repeated measures designs, effective sample size can be computed as neff=nk1+ρ(k−1), where ρ is the intraclass correlation. When ρ=0, neff=nk, and when ρ=1, neff=n. Though ρ is unknown, Nathoo and Masson (2016) developed a method to estimate it from SS values in the ANOVA, leading to the following refined estimate:

Though this estimate certainly provides a better account of the correlation between repeated measurements, the benefit comes at a price of added complexity, and certainly one cannot reduce this formula easily to a simple expression involving only F as we do with Equation 2. This leads to the natural question: how well does our Equation 2 match up with the more complex approach of Nathoo and Masson (2016)?

As a first step toward answering this question, let us revisit the two examples presented above. If we apply the Nathoo and Masson formula to the ANOVA summary in Table 1, we obtain:

We can convert ΔBIC10 to a Bayes factor, giving us B01≈exp(ΔBIC10/2)=exp(−20.879/2)=0.00002925. As above, we cast this Bayes factor in favor of H1 by inverting, so B10=1/0.0002925=34188.03. This implies p(H1∣data)=34188.03/(1+34188.03)=0.99997. Note that the general interpretation of these results is on par with our earlier method; both indicate overwhelming support for H1. If anything, the approximation we obtained with Equation 2 is slightly conservative regarding support for H1; this is because the method of Nathoo and Masson was designed to reduce the BIC penalty for H1 when repeated measures conditions are highly correlated; compared to the formulation upon which Equation 2 is based, this will tend to increase the support for H1 Nathoo and Masson (2016).

We can do a similar computation with the data from Table 2:

The computations in the previous section reflect two preliminary findings. First, the revised BIC formula of Nathoo and Masson (2016) yields Bayes factors and posterior model probabilities that take into account an estimate of the correlation between repeated measurements. This is a highly principled approch which our Equation 2 does not take. However, as we can see with both computations, the general conclusion remains the same regardless of whether we used Equation 2 or the Nathoo and Masson method. Given that our Equation 2 is (1) easy to use, and (2) requires only three inputs (the number of subjects n, the number of repeated measurement conditions k, and the F statistic), could it be that Equation 2 produces results that are sufficient for day-to-day work, with the risk of being conservative being outweighed by the simplicity of our formula? To answer this question, we conducted a Monte Carlo simulation to systematically investigate the relationship between Equation 2 and the Nathoo and Masson method across a wide variety of randomly generated datasets.

In this simulation, we randomly generated datasets that reflected the repeated-measures designs that we have discussed throughout this paper. Specifically, data were generated from the linear mixed model

where μ represents a grand mean, αj represents a treatment effect, and πi represents a subject effect. For convenience, we set k=3, though similar results were obtained with other values of k (not reported here). Also, we assume πi∼N(0,σ2π) and εij∼N(0,σ2ε). We systematically varied three components of the model:

), we generated 1000 simulated datasets. For each of the datasets, we applied a repeated-measures ANOVA model and extracted two posterior probabilities for

H0; one based on Equation 2 and one based on the refined estimate of Nathoo and Masson (2016). The results are depicted in Figure 1.

For small effects (row 2 of Figure 1), the performance of both methods depended heavily on the correlation between repeated measurements. For small intraclass correlation (ρ=0.2), both methods were quite supportive of H0, even though H1 was the true model. This reflects the conservative nature of the BIC approximation (Wagenmakers, 2007); since the unit information prior is uninformative and puts reasonable mass on a large range of possible effect sizes, the predictive updating value for any positive effect (i.e., B10 will be smaller than would be the case if the prior was more concentrated on smaller effects. As a result, the posterior probability for H1 is smaller as well. Regardless, the original BIC method (Equation 2 and the Nathoo and Masson (2016) method produce similar results. The picture is different when the intraclass correlation is large (ρ=0.8); both methods produce a wide range of posterior probabilities, though they are again highly comparable. It is worth pointing out that the posterior probability estimates all improve with increasing numbers of observations; but this should not be surprising, given that the BIC approximation underlying both Equation 2 and the Nathoo and Masson (2016) method is large sample approximation technique.

For medium effects (row 3 of Figure 1), we see much of the same message that we’ve already discussed previously. Both Equation 2 and the Nathoo and Masson (2016) method produce similar posterior probability values for H0. Both methods improve with increasing sample size, and at least for medium-size effects, the computations are quite reliable for high values of correlation between repeated measurements.

In this paper, we have proposed a formula for estimating Bayes factors from repeated measures ANOVA designs. These ideas extend previous work of Faulkenberry (2018), who presented such formulas for between-subject designs. Such formulas are advantageous for researchers in a wide variety of empirical disciplines, as they provide an easy-to-use method for estimating Bayes factors from a minimal set of summary statistics. This gives the user a powerful index for estimating evidential value from a set of experiments, even in cases where the only data available are the summary statistics published in a paper. We think this provides a welcome addition to the collection of tools for doing Bayesian computation with summary statistics (e.g., Ly et al., 2018).