(To appear in Theory and Practice of Logic Programming (TPLP)) ESmodels is designed and implemented as an experiment platform to investigate the semantics, language, related reasoning algorithms, and possible applications of epistemic specifications.We first give the epistemic specification language of ESmodels and its semantics. The language employs only one modal operator K but we prove that it is able to represent luxuriant modal operators by presenting transformation rules. Then, we describe basic algorithms and optimization approaches used in ESmodels. After that, we discuss possible applications of ESmodels in conformant planning and constraint satisfaction. Finally, we conclude with perspectives. 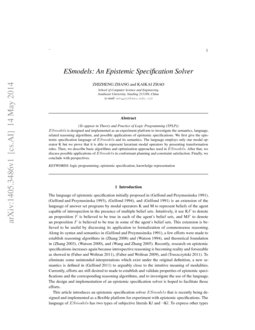 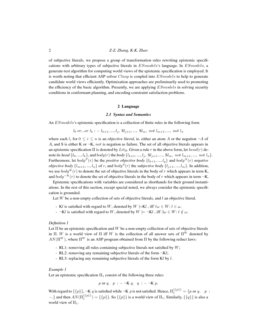 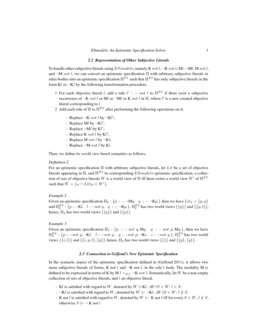 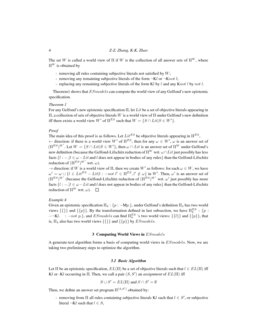 The language of epistemic specification initially proposed in [Gelfond and Przymusinska (1991)], [Gelfond and Przymusinska (1993)], [Gelfond (1994)], and [Gelfond (1991)] is an extension of the language of answer set programs by modal operators K and M to represent beliefs of the agent capable of introspection in the presence of multiple belief sets. Intuitively, it use KF to denote an proposition F is believed to be true in each of the agent’s belief sets, and MF to denote an proposition F is believed to be true in some of the agent’s belief sets. This extension is believed to be useful by discussing its application to formalization of commonsense reasoning. Along its syntax and semantics in [Gelfond and Przymusinska (1991)], a few efforts were made to establish reasoning algorithms in [Zhang (2006)] and [Watson (1994)], and theoretical foundation in [Zhang (2003)], [Watson (2000)], and [Wang and Zhang (2005)]. Recently, research on epistemic specifications increases again because introspective reasoning is becoming reality and forseeable as showed in [Faber and Woltran (2011)], [Faber and Woltran (2009)], and [Truszczyński (2011)]. To eliminate some unintended interpretations which exist under the original definition, a new semantics is defined in [Gelfond (2011)] to arguably close to the intuitive meaning of modalities. Currently, efforts are still desired to made to establish and validate properties of epistemic specifications and the corresponding reasoning algorithms, and to investigate the use of the language. The design and implementation of an epistemic specification solver is hoped to facilitate those efforts.

Let Π be an epistemic specification and W be a non-empty collection of sets of objective literals in Π. W is a world view of Π iff W is the collection of all answer sets of ΠW denoted by AN(ΠW), where ΠW is an ASP program obtained from Π by the following reduct laws:

Let an epistemic specification Π1 consist of the following three rules:

2.2 Representation of Other Subjective Literals

Then, we define its world view based semantics as follows.

In the syntactic aspect of the epistemic specification defined in [Gelfond (2011)], it allows two more subjective literals of forms, K not l and ¬K not l, in the rule’s body. The modality M is defined to be expressed in terms of K by Ml=def¬K notl. Semantically, let W be a non-empty collection of sets of objective literals, and l an objective literal.

The set W is called a world view of Π if W is the collection of all answer sets of ΠW, where ΠW is obtained by

Theorem1 shows that ESmodels can compute the world view of any Gelfond’s new epistemic specification.

A generate-test algorithm forms a basis of computing world views in ESmodels. Now, we are taking two preliminary steps to optimize the algorithm.

Let Π be an epistemic specification, EL(Π) be a set of objective literals such that l∈EL(Π) iff Kl or -Kl occurring in Π. Then, we call a pair (S,S′) an assignment of EL(Π) iff

Then, we define an answer set program Π(S,S′) obtained by:

Given an epistemic specification Π and a collection W of sets of objective literals. W is a world view of Π if an assignment (S,S′) of EL(Π) exists such that

By Theorem 2, an immediate method of computing the world views of an epistemic specification includes three main stages: generating a possible assignment, reducing the epistemic specification into an answer set program, and testing if the collection of the answer sets of the answer set program satisfies the assignment. At a high level of abstraction, the method can be implemented as showed in the following algorithm.

ESMODELS firstly gets all subjective literals EL(Π) and generates all possible assignments of EL(Π). For each assignment(S,S′), the algorithm reduces Π to an answer set program Π′, i.e., Π′=Π(S,S′). Next, it calls exiting ASP solver like Smodels, Clasp to compute all answer sets W of Π′. Finally, it verifies the W. W is a world view of Π, if W satisfies S∩(⋂A∈W)==S and S′∩(⋂A∈W)==∅. ESMODELS stops, when all possible assignments are tested.

However, ESMODELS has a high computational cost, especially with a large number of subjective literals. Therefore, we introduce a new preprocessing function to reduce reduce EL(Π) before generating all possible assignments of EL(Π). We first give several propositions.

Let Π be an epistemic specification and a pair (S,S′) of objective literals of Π, TΠ be an lower bound operator on (S,S′) defined as follows:

where body+(r)=bodyP(r)∪bodyK(r), body−(r)=bodyN(r)∪body−K(r). Intuitively, TΠ(S,S′) computes the objective literals that must be true and that not true with regard to S and S′ which are sets of literals known true and known not true respectively. Clearly, we can use this operation to reduce the searching space of subjective literals. This idea is guaranteed by the following definitions and propositions.

A pair (S,S′) of sets of objective literals is a partial model of an epistemic specification Π if, for any world view W of Π, S∩(⋂A∈W)==S and S′∩(⋂A∈W)==∅.

If (S,S′) is a partial model of an epistemic specification Π, Π|(S,S′) and Π have the same world views.

Obviously, PreProcess and partial model are very helpful for reducing search space. We thus provide an EFFICIENT ESMODELS as follows:

In ESmodels, another way of improving efficiency is the use of multicore technology. Based on Algorithm 3, by parallel generation of possible assignments and parallel calling of ASP solver, the efficiency of ESmodels can be improved greatly.

Consider the planning problem with multiple possible initial states, what makes it become much harder is to find a so called secure plan that enforces the goal from any initial state. [Eiter et al. (2003)] gives three security conditions to check whether a plan is secure:

Here, we consider a track of effects of executing an action sequence as a belief set, thus can intuitively encode those security conditions in epistemic specification constraints. We use nonexecutable to denote the actions are not executable, inconsistent to denote that a state is illegal, success to sign a state satisfies the goal, and goal(m) to denote the state reached after a given steps number m satisfies the goal, and o(A,T) to denote an action A happens in the step T:

Moreover, to guarantee the above security testing is put on tracks caused by the same action sequence, we write a new constraint.

When we set m=2, ESmodels can find the unique world view including twelve literal sets, and each of them includes o(a,0) and o(b,1) that means the program has a conformant plan a b.

In some situations, constraints on the variable are with epistemic features, that is, a variable’s value is not only affected by the values of other variables, but also determined by all possible values of other variables. Here, we demonstrate the use of ESmodels in solving such constraint satisfaction problems using a dinner problem:Jim, Bones, Checkov, Mike, Jack, Uhura, and Scotty, and Tommy received a dinner invitation, and the constraints on their decisions and the constraints description in epistemic specification rules are as follows:

The work presented here is primary. Now, we are designing and exploring more efficient algorithm for ESmodels and evaluate it using those benchmarks in the conformant planning field.