Non-orthogonal multiple access (NOMA) is very promising for future wireless systems thanks to its spectral efficiency. In NOMA schemes, the effect of imperfect successive interference canceler (SIC) has dominant effect on the error performances. In addition to this imperfect SIC effect, the error performance will get worse with the channel estimation errors just as in all wireless communications systems. However, all literature has been devoted to analyze error performance of NOMA systems with the perfect channel state information (CSI) at the receivers which is very strict/unreasonable assumption. In this paper, we analyze error performance of NOMA systems with imperfect SIC and channel estimation errors, much more practical scenario. We derive exact bit error probabilities (BEPs) in closed-forms. All theoretical analysis is validated via computer simulations. Then, we discuss optimum power allocation for user fairness in terms of error performance of users and propose a novel power allocation scheme which achieves maximum user fairness. 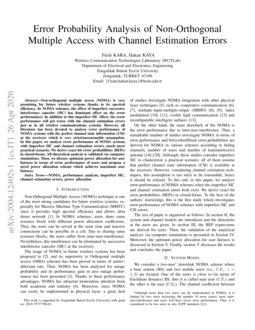 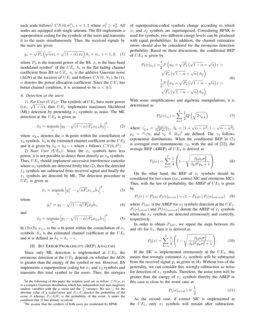 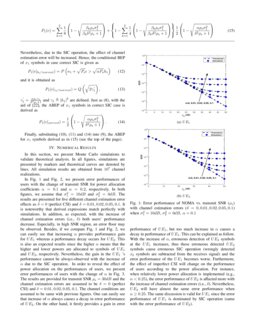 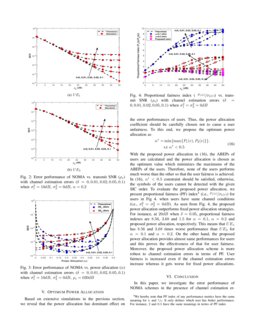 Non-Orthogonal Multiple Access (NOMA) technique is one of the most strong candidates for future wireless systems, especially for Massive Machine Type Communication (MMTC) since it provides high spectral efficiency and allows ultra dense network [1]. In NOMA schemes, users share same resource block with different power allocation coefficients. Thus, the users can be served at the same time and massive connections can be possible in a cell. Due to sharing same resource blocks, the users suffer from inter-user-interference. Nevertheless, this interference can be eliminated by successive interference canceler (SIC) at the receivers.

The usage of NOMA in future wireless systems has been proposed in [2], and its superiority to Orthogonal multiple access (OMA) schemes has been proved in terms of achievable/sum rate. Then, NOMA has been analyzed for outage probability and its performance gain in also outage performance has been presented[3]. Thanks to these performance advantages, NOMA has attracted tremendous attention from both academia and industry[4]. Moreover, since NOMA can easily be implemented in physical layer, a great deal of studies investigate NOMA integration with other physical layer techniques [5] such as cooperative communication[6, 7], multiple-input-multiple-output (MIMO)[8, 9], index modulation[10, 11], visible light communication[12] and reconfigurable intelligent surfaces[13].

On the other hand, the main drawback of the NOMA is the error performance due to inter-user-interference. Thus, a remarkable number of studies investigate NOMA in terms of error performance and bit/symbol/block error probabilities are derived for NOMA in various schemes according to fading channels, number of users and number of transmit/receive antenna [14, 15, 16, 17, 18, 19, 20]. Although, these studies consider imperfect SIC to characterize a practical scenario, all of them assume that perfect channel state information (CSI) is available at the receivers. However, considering channel estimation techniques, this assumption is too strict to be reasonable, hence it should be relaxed. To this end, in this paper, we analyze error performance of NOMA schemes when the imperfect SIC and channel estimation errors both exist. We derive exact bit error probabilities (BEPs) in closed-forms. To the best of the authors’ knowledge, this is the first study which investigates error performance of NOMA schemes with imperfect SIC and CSI errors.

The rest of paper is organized as follows. In section II, the system and channel models are introduced and the detections at the users are given. In section III, the BEP expressions are derived for users. Then, the validation of the analytical analysis via computer simulations is presented in Section IV. Moreover, the optimum power allocation for user fairness is discussed in Section V. Finally, section V discusses the results and concludes the paper.

We consider a two-user111Although more than two users can be implemented in NOMA, it is limited by two since increasing the number of users causes more inter-user-interference and users will have worse error performance. Thus, it is considered to be two users in also 3GPP standards[21]. downlink NOMA scheme where a base station (BS) and two mobile users (i.e., UEi, i=1,2) are located. One of the users is close to (in terms of Euclidean distance) BS, thus it is called near user (UE1) and the other is far user (UE2). The channel coefficient between each node follows222In the following of this paper the notation used are as follow. CN(μ,σ)

for the absolute value of a scalar/vector and

where PS is the transmit power of the BS. xi is the base-band modulated symbol333We assume that the symbols of both users are modulated by BPSK. of the UEi. hi is the flat fading channel coefficient from BS to UEi. ni is the additive Gaussian noise (AGN) at the receiver of UEi and follows CN(0,N0). In (1), α denotes the power allocation coefficient. Since the UE1 has better channel condition, it is assumed to be α<0.5.

Ii-a Detection at the users

The symbols of UE2 have more power (i.e., √1−α), thus UE2 implements maximum likelihood (ML) detection by pretending x1 symbols as noise. The ML detection at the UE2 is given as

where x2,n denotes the n th point within the constellation of x2 symbols. ^h2 is the estimated channel coefficient at the UE2 and it is given by ^h2=h2−ϵ where ϵ follows CN(0,δ2).

Since only ML detection is implemented at UE2, the erroneous detection at the UE2 depends on whether the AGN is greater than the energy of the symbol or not. However, BS implements a superposition coding for x1 and x2 symbols and transmits this total symbol to the users. Thus, the energies of superposition-coded symbols change according to which x1 and x2 symbols are superimposed. Considering BPSK is used for symbols, two different energy levels can be produced with equal probabilities. In addition, the channel estimation errors should also be considered for the erroneous detection probability. Based on these discussions, the conditional BEP of UE2 is given by

With some simplifications and algebraic manipulations, it is determined as

follows exponential distributions. When the conditional BEP in (7) is averaged over instantaneous

On the other hand, the BEP of x1 symbols should be considered for two cases (i.e., correct SIC and erroneous SIC). Thus, with the law of probability, the ABEP of UE1 is given by

where PSIC is the ABEP for x2 symbols detection at the UE1. P1(e|error) and P1(e|correct) denote the ABEP of x1 symbols when the x2 symbols are detected erroneously and correctly, respectively.

In order to obtain PSIC, we repeat the steps between (6) and (8) for h1, then it is derived as

If the SIC is implemented erroneously at the UE1, this means that wrongly estimated ^x2 symbols will be subtracted from the received signal y1 as given in (4). Without loss of the generality, we can consider this wrongly-subtraction as noise for detection of x1 symbols. Therefore, the noise term will be greater than the energy of x1 symbols thereby the ABEP in this case is close to the worst case as

As the second case, if correct SIC is implemented at the UE1, only x1 symbols will remain after subtraction. Nevertheless, due to the SIC operation, the effect of channel estimation error will be increased. Hence, the conditional BEP of x1 symbols in case correct SIC is given as

and it is obtained as

In this section, we present Monte Carlo simulations to validate theoretical analysis. In all figures, simulations are presented by markers and theoretical curves are denoted by lines. All simulation results are obtained from 107 channel realizations.

In Fig. 1 and Fig. 2, we present error performances of users with the change of transmit SNR for power allocation coefficients α=0.1 and α=0.2, respectively. In both figures, we assume that σ21=10dB and σ22=0dB. The results are presented for five different channel estimation error effects as δ=0 (perfect CSI) and δ=0.01,0.02,0.05,0.1. It is noteworthy that derived expressions match perfectly with simulations. In addition, as expected, with the increase of channel estimation errors (i.e., δ) both users’ performance decrease. Especially, in high SNR region, an error floor may be observed. Besides, if we compare Fig. 1 and Fig. 2, we can easily see that increasing α provides performance gain for UE1 whereas a performance decay occurs for UE2. This is also an expected results since the higher α means that the higher and lower powers are allocated to symbols of UE1 and UE2, respectively. Nevertheless, the gain in the UE1 ’s performance cannot be always-observed with the increase of α due to the SIC operation.

In this paper, we investigate the error performance of NOMA schemes in the presence of channel estimation errors in addition to imperfect SIC. We derive exact ABEP expressions in the closed-forms and all anlyses are validated via computer simulations. Moreover, we discuss optimum power allocation considering user fairness in terms of error performances. To the best of the authors’ knowledge, error analysis of any NOMA schemes with channel estimation errors is firstly conducted in this paper. Thus, the analysis in this paper could be further extended for any NOMA schemes such as cooperative-NOMA, MIMO-NOMA, etc. These are seen as future works.