This paper is concerned with the numerical approximation of the Dirichlet initial-boundary-value problem of nonlinear pseudo-parabolic equations with spectral methods. Error estimates for the semidiscrete Galerkin and collocation schemes based on Jacobi polynomials are derived. 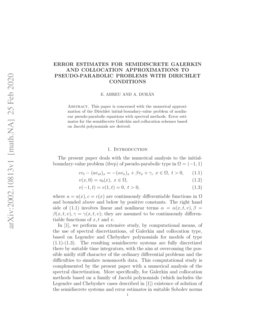 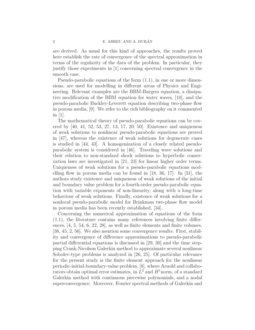 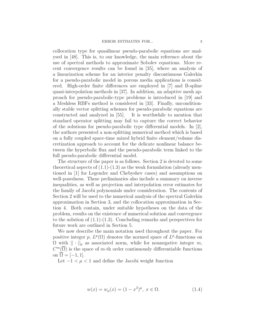 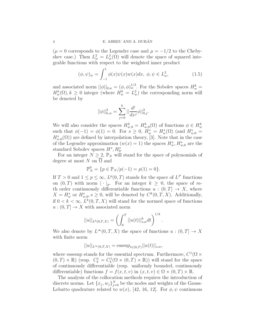 This paper is concerned with the approximation of linear and nonlinearin...
Eduardo Abreu, et al. ∙

In this paper, we analyze and implement the Dirichlet spectral-Galerkin ...
Isaac Harris, et al. ∙

Analysis of a Helmholtz preconditioning problem motivated by uncertainty quantification

The present paper deals with the numerical analysis to the initial-boundary-value problem (ibvp) of pseudo-parabolic type in Ω=(−1,1)

In [1], we perform an extensive study, by computational means, of the use of spectral discretizations, of Galerkin and collocation type, based on Legendre and Chebyshev polynomials for models of type (1.1)-(1.3). The resulting semidiscrete systems are fully discretized there by suitable time integrators, with the aim at overcoming the possible midly stiff character of the ordinary differential problems and the difficulties to simulate nonsmooth data. This computational study is complemented by the present paper with a numerical analysis of the spectral discretization. More specifically, for Galerkin and collocation methods based on a family of Jacobi polynomials (which includes the Legendre and Chebyshev cases described in [1]) existence of solution of the semidiscrete systems and error estimates in suitable Sobolev norms are derived. As usual for this kind of approaches, the results proved here establish the rate of convergence of the spectral approximation in terms of the regularity of the data of the problem. In particular, they justify those experiments in [1] concerning spectral convergence in the smooth case.

Pseudo-parabolic equations of the form (1.1), in one or more dimensions, are used for modelling in different areas of Physics and Engineering. Relevant examples are the BBM-Burgers equation, a dissipative modification of the BBM equation for water waves, [10], and the pseudo-parabolic Buckley-Leverett equation describing two-phase flow in porous media, [9]. We refer to the rich bibliography on it commented in [1].

. We also mention some convergence results. First, stability and convergence of difference approximations to pseudo-parabolic partial differential equations is discussed in

[29, 30] and the time stepping Crank-Nicolson Galerkin method to approximate several nonlinear Sobolev-type problems is analyzed in [26, 25]. Of particular relevance for the present study is the finite element approach for the nonlinear periodic-initial-boundary-value problem, [8], where Arnold and collaborators obtain optimal error estimates, in L2 and H1norm, of a standard Galerkin method with continuous piecewise polynomials, and a nodal superconvergence. Moreover, Fourier spectral methods of Galerkin and collocation type for quasilinear pseudo-parabolic equations are analysed in [48]. This is, to our knowledge, the main reference about the use of spectral methods to approximate Sobolev equations. More recent convergence results can be found in [35], where an analysis of a linearization scheme for an interior penalty discontinuous Galerkin for a pseudo-parabolic model in porous media applications is considered. High-order finite differences are employed in [7]

and B-spline quasi-interpolation methods in

[37]. In addition, an adaptive mesh approach for pseudo-parabolic-type problems is introduced in [19] and a Meshless RBFs method is considered in [33]

The structure of the paper is as follows. Section 2 is devoted to some theoretical aspects of (1.1)-(1.3) as the weak formulation (already mentioned in [1] for Legendre and Chebyshev cases) and assumptions on well-posedness. These preliminaries also include a summary on inverse inequalities, as well as projection and interpolation error estimates for the family of Jacobi polynomials under consideration. The contents of Section 2 will be used to the numerical analysis of the spectral Galerkin approximation in Section 3, and the collocation approximation in Section 4. Both contain, under suitable hypotheses on the data of the problem, results on the existence of numerical solution and convergence to the solution of (1.1)-(1.3). Concluding remarks and perspectives for future work are outlined in Section 5.

We now describe the main notation used throughout the paper. For positive integer p, Lp(Ω) denotes the normed space of Lp-functions on Ω with ||⋅||p as associated norm, while for nonnegative integer m, Cm(¯¯¯¯Ω) is the space of m-th order continuously differentiable functions on ¯¯¯¯Ω=[−1,1].

(μ=0 corresponds to the Legendre case and μ=−1/2 to the Chebyshev case.) Then L2w=L2w(Ω) will denote the space of squared integrable functions with respect to the weighted inner product

For an integer N≥2, PN will stand for the space of polynomials of degree at most N on ¯¯¯¯Ω and

The analysis of the collocation methods requires the introduction of discrete norms. Let {xj,wj}Nj=0 be the nodes and weights of the Gauss-Lobatto quadrature related to w(x), [42, 16, 12]. For ϕ,ψ continuous on ¯¯¯¯Ω, the discrete inner product based on the Gauss-Lobatto data is denoted by

Let N≥2 be an integer. Then there exist positive constants C1,C2, independent of N, such that for any ϕ∈PN

Finally C will be used to denote a generic, positive constant, independent of N and u, but that may depend on t (this will be denoted by C(t)).

The analysis of the spectral discretizations that will be made below requires some hypotheses, properties and technical results concerning (1.1)-(1.3) and the approximation in weighted norms. From now on we will fix μ∈(−1,1) and consider the weight (1.4). The first property to be mentioned is the weak formulation of (1.1)-(1.3), cf. [1]

Since a is bounded above and below by positive constants, then La is equivalent to

where C is a constant depending only on ||v0||k,w and the data of the problem.

The estimates in the weighted Sobolev spaces Hsw,s≥0, concern the use of the family of Jacobi polynomials {Jμn}∞n=0, which are orthogonal to each other in L2w. Particular cases such as Legendre and Chebyshev families correspond to μ=0 and μ=−1/2, respectively. Most properties of this Jacobi family (a particular one of the more general Jacobi polynomials {Jμ,νn}∞n=0, orthogonal in L2wμ,ν with wμ,ν(x)=(1−x)μ(1+x)ν) are extension of the corresponding properties of the Legendre family, [11, 12].

In the Legendre and Chebyshev cases, sharper estimates hold, see [15, 16].

A third projection operator used below concerns the bilinear form A given by (2.2). If v∈H1w,0 then the orthogonal projection ¯¯¯v∈P0N of v with respect to A is defined as ¯¯¯v=RNv:(0,T)→P0N such that

for v∈Hmw,m≥1. Furthermore, a generalized estimate can be obtained as follows. If v∈Hmw,m≥2, let uN∈PN be a polynomial such that, [16]

Let N≥2 be an integer, s≥0,v∈Hsw and let INv denote the interpolant polynomial of v on PN based on the Gauss-Lobatto-Jacobi nodes. The following estimates for the interpolation errors can be seen in [11, 12]: for v∈Hsw

Finally, an additional estimate comparing the continuous and discrete inner products will be necessary: if f∈H1w and ϕ∈PN, then

Let N≥2 be an integer, T>0. The semidiscrete Galekin approximation is defined as the function vN:(0,T)→P0N satisfying, cf. [1]

) are ensured by standard theory of ordinary differential equations (ode) when (

3.1) is considered as a finite system for the coefficients of vN in some basis of P0N, by using the property of ellipticity of A and continuity of B. Concerning this last point, some estimates on B will be required in order to prove a global existence result. This is discussed in the following remark.

for some constant C. Then

As far as the error estimates are concerned, let ¯¯¯v be the projection defined in (2.8) and