In this paper, we are concerned with the numerical solution for the backward fractional Feynman-Kac equation with non-smooth initial data. Here we first provide the regularity estimate of the solution. And then we use the backward Euler and second-order backward difference convolution quadratures to approximate the Riemann-Liouville fractional substantial derivative and get the first- and second-order convergence in time. The finite element method is used to discretize the Laplace operator with the optimal convergence rates. Compared with the previous works for the backward fractional Feynman-Kac equation, the main advantage of the current discretization is that we don't need the assumption on the regularity of the solution in temporal and spatial directions. Moreover, the error estimates of the time semi-discrete schemes and the fully discrete schemes are also provided. Finally, we perform the numerical experiments to verify the effectiveness of the presented algorithms. 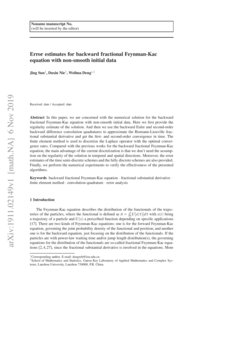 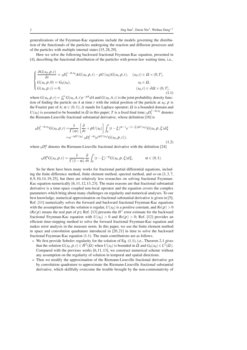 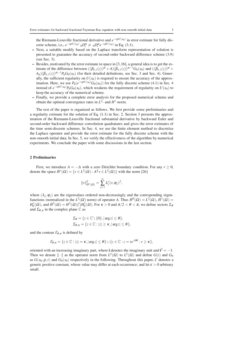 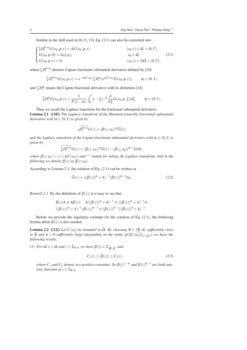 The Feynman-Kac equation describes the distribution of the functionals of the trajectories of the particles, where the functional is defined as A=∫t0U[x(τ)]dτ with x(t) being a trajectory of a particle and U(x) a prescribed function depending on specific applications Kac1949

Agmon1984 ; Carmi2010 ; Wang2018 , since the fractional substantial derivative is involved in the equations. More generalizations of the Feynman-Kac equations include the models governing the distribution of the functionals of the particles undergoing the reaction and diffusion processes and of the particles with multiple internal states Hou2018 ; Xu2018 ; Xu2018-2 .

is the joint probability density function of finding the particle on

A at time t with the initial position of the particle at x0; ρ is the Fourier pair of A; α∈(0,1); Δ stands for Laplace operator; Ω is a bounded domain and U(x0) is assumed to be bounded in ¯Ω in this paper; T is a fixed final time; 0D1−α,x0t denotes the Riemann-Liouville fractional substantial derivative, whose definition Li2015 is

So far there have been many works for fractional partial differential equations, including the finite difference method, finite element method, spectral method, and so on

The rest of the paper is organized as follows. We first provide some preliminaries and a regularity estimate for the solution of Eq. (1.1) in Sec. 2. Section 3 presents the approximation of the Riemann-Liouville fractional substantial derivative by backward Euler and second-order backward difference convolution quadratures and gives the error estimates of the time semi-discrete schemes. In Sec. 4, we use the finite element method to discretize the Laplace operator and provide the error estimate for the fully discrete scheme with the non-smooth initial data. In Sec. 5, we verify the effectiveness of the algorithm by numerical experiments. We conclude the paper with some discussions in the last section.

and the contour Γθ,κ is defined by

oriented with an increasing imaginary part, where i denotes the imaginary unit and i2=−1. Then we denote ∥⋅∥ as the operator norm from L2(Ω) to L2(Ω) and define G(t) and G0 as G(x0,ρ,t) and G0(x0) respectively in the following. Throughout this paper, C denotes a generic positive constant, whose value may differ at each occurrence; and let ϵ>0 arbitrary small.

and  C0Dαt means the Caputo fractional derivative with its definition Podlubny1999

Then we recall the Laplace transform for the fractional substantial derivative.

The Laplace transform of the Riemann-Liouville fractional substantial derivative with α∈(0,1) is given by

and the Laplace transform of the Caputo fractional substantial derivative with α∈(0,1) is given by

By the definition of β(z), it is easy to see that

Before we provide the regularity estimate for the solution of Eq. (2.1), the following lemma about β(z) is also needed.

Taking inverse Laplace transform and L2(Ω) norm on both sides of (2.2), according to Lemma 2.2, we have

Applying A on both sides of (2.2), taking inverse Laplace transform, and acting L2(Ω) norm on both sides, from Lemma 2.2, there is

In this section, we first use the backward Euler and second-order backward difference convolution quadratures introduced in Lubich1988 ; Lubich1988-2 to discretize the Riemann-Liouville fractional substantial derivative and get the first- and second-order schemes in time. Then we provide the complete error analysis.

We use backward Euler convolution quadrature to discretize the time fractional substantial derivative and get the first-order accuracy in time. Introduce Gn as the numerical approximation of solution G(x0,ρ,tn). Then we can obtain the temporal semi-discrete scheme

Multiplying ζn on both sides of the first formula of (3.2) and summing n from 1 to ∞ lead to

which is followed by (???). Furthermore, we have

Let U(x0) be bounded in ¯Ω. By choosing θ∈(π2,π) sufficiently close to π2 and κ>0 sufficiently large (depending on |ρ|∥U(x0)∥L∞(¯Ω)), there exists a positive constant τ∗ (depending on θ and κ) such that the following estimates hold when τ≤τ∗:

Subtracting (3.6) from the inverse Laplace transform of (2.2), we have

As for II, one can split it into

In this subsection, we use second-order backward difference convolution quadrature to discretize the time fractional substantial derivative and obtain the second-order accuracy in time. Similarly, introduce Gn as the numerical approximation of the solution G(x0,ρ,tn), and let