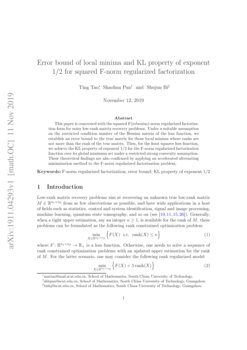 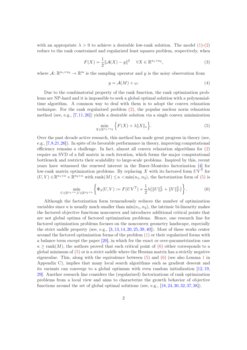 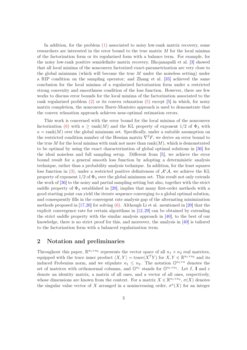 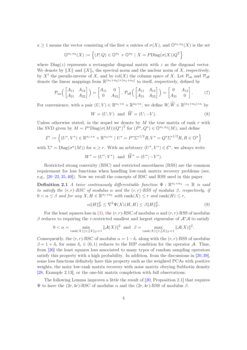 from as few observations as possible, and have wide applications in a host of fields such as statistics, control and system identification, signal and image processing, machine learning, quantum state tomography, and so on (see

). Generally, when a tight upper estimation, say an integer

κ≥1, is available for the rank of M, these problems can be formulated as the following rank constrained optimization problem

where F:Rn1×n2→R+ is a loss function. Otherwise, one needs to solve a sequence of rank constrained optimization problems with an updated upper estimation for the rank of M. For the latter scenario, one may consider the following rank regularized model

with an appropriate λ>0 to achieve a desirable low-rank solution. The model (1)-(2) reduce to the rank constrained and regularized least squares problem, respectively, when

where A:Rn1×n2→Rm is the sampling operator and y is the noisy observation from

Due to the combinatorial property of the rank function, the rank optimization problems are NP-hard and it is impossible to seek a global optimal solution with a polynomial-time algorithm. A common way to deal with them is to adopt the convex relaxation technique. For the rank regularized problem (2), the popular nuclear norm relaxation method (see, e.g., [11, 26, 7]) yields a desirable solution via a single convex minimization

Over the past decade active research, this method has made great progress in theory (see, e.g., [7, 8, 26, 21]). In spite of its favorable performance in theory, improving computational efficiency remains a challenge. In fact, almost all convex relaxation algorithms for (2) require an SVD of a full matrix in each iteration, which forms the major computational bottleneck and restricts their scalability to large-scale problems. Inspired by this, recent years have witnessed the renewed interest in the Burer-Monteiro factorization [4] for low-rank matrix optimization problems. By replacing X with its factored form UVT for (U,V)∈Rn1×κ×Rn2×κ with rank(M)≤κ<min(n1,n2), the factorization form of (5) is

Although the factorization form tremendously reduces the number of optimization variables since κ is usually much smaller than min(n1,n2), the intrinsic bi-linearity makes the factored objective functions nonconvex and introduces additional critical points that are not global optima of factored optimization problems. Hence, one research line for factored optimization problems focuses on the nonconvex geometry landscape, especially the strict saddle property (see, e.g., [25, 13, 14, 3, 20, 39, 40]). Most of these works center around the factored optimization forms of the problem (1) or their regularized forms with a balance term except the paper [20], in which for the exact or over-parametrization case κ≥rank(M), the authors proved that each critical point of (6) either corresponds to a global minimum of (5

) or is a strict saddle where the Hessian matrix has a strictly negative eigenvalue. This, along with the equivalence between (

5) and (6) (see also Lemma 1 in Appendix C), implies that many local search algorithms such as gradient descent and its variants can converge to a global optimum with even random initialization [12, 19, 29]. Another research line considers the (regularized) factorizations of rank optimization problems from a local view and aims to characterize the growth behavior of objective functions around the set of global optimal solutions (see, e.g., [18, 24, 30, 32, 37, 38]).

In addition, for the problem (1) associated to noisy low-rank matrix recovery, some researchers are interested in the error bound to the true matrix M for the local minima of the factorization form or its regularized form with a balance term. For example, for the noisy low-rank positive semidefinite matrix recovery, Bhojanapalli et al. [3] showed that all local minima of the nonconvex factorized exact-parametrization are very close to the global minimum (which will become the true M under the noiseless setting) under a RIP condition on the sampling operator; and Zhang et al. [35] achieved the same conclusion for the local minima of a regularized factorization form under a restricted strong convexity and smoothness condition of the loss function. However, there are few works to discuss error bounds for the local minima of the factorization associated to the rank regularized problem (2) or its convex relaxation (5) except [5] in which, for noisy matrix completion, the nonconvex Burer-Monteiro approach is used to demonstrate that the convex relaxation approach achieves near-optimal estimation errors.

This work is concerned with the error bound for the local minima of the nonconvex factorization (6) with κ≥rank(M) and the KL property of exponent 1/2 of Φλ with κ=rank(M) over the global minimum set. Specifically, under a suitable assumption on the restricted condition number of the Hessian matrix ∇2F, we derive an error bound to the true M for the local minima with rank not more than rank(M), which is demonstrated to be optimal by using the exact characterization of global optimal solutions in [36] for the ideal noiseless and full sampling setup. Different from [5]

3), under a restricted positive definiteness of A∗A, we achieve the KL property of exponent 1/2 of Φλ over the global minimum set. This result not only extends the work of [36] to the noisy and partial sampling setting but also, together with the strict saddle property of Φλ established in [20], implies that many first-order methods with a good starting point can yield the iterate sequence converging to a global optimal solution, and consequently fills in the convergent rate analysis gap of the alternating minimization methods proposed in [26, 17] for solving (6). Although Li et al. mentioned in [20] that the explicit convergence rate for certain algorithms in [12, 29] can be obtained by extending the strict saddle property with the similar analysis approach in [40], to the best of our knowledge, there is no strict proof for this, and moreover, the analysis in [40] is tailored to the factorization form with a balanced regularization term.

represents the vector space of all

n1×n2 real matrices, equipped with the trace inner product ⟨X,Y⟩=trace(XTY) for X,Y∈Rn1×n2 and its induced Frobenius norm, and we stipulate n1≤n2. The notation On1×κ denotes the set of matrices with orthonormal columns, and On1 stands for On1×n1. Let I, I and e

denote an identity matrix, a matrix of all ones, and a vector of all ones, respectively, whose dimensions are known from the context. For a matrix

denotes the singular value vector of

X arranged in a nonincreasing order, σκ(X) for an integer κ≥1 means the vector consisting of the first κ entries of σ(X), and On1,n2(X) is the set

where Diag(z) represents a rectangular diagonal matrix with z as the diagonal vector. We denote by ∥X∥ and ∥X∥∗ the spectral norm and the nuclear norm of X, respectively, by X† the pseudo-inverse of X, and by col(X) the column space of X. Let Pon and Poff denote the linear mappings from R(n1+n2)×(n1+n2) to itself, respectively, defined by

Unless otherwise stated, in the sequel we denote by M the true matrix of rank r with the SVD given by M=P∗Diag(σ(M))(Q∗)T for (P∗,Q∗)∈On1,n2(M), and define

Restricted strong convexity (RSC) and restricted smoothness (RSS) are the common requirement for loss functions when handling low-rank matrix recovery problems (see, e.g., [21, 22, 20, 40, 35]). Now we recall the concepts of RSC and RSS used in this paper.

For the least squares loss in (3), the (r,r)-RSC of modulus α and (r,r)-RSS of modulus β reduces to requiring the r-restricted smallest and largest eigenvalue of A∗A to satisfy

Consequently, the (r,r)-RSC of modulus α=1−δr along with the (r,r)-RSS of modulus β=1+δr for some δr∈(0,1) reduces to the RIP condition for the operator A. Thus, from [26] the least squares loss associated to many types of random sampling operators satisfy this property with a high probability. In addition, from the discussions in [39, 20], some loss functions definitely have this property such as the weighted PCAs with positive weights, the noisy low-rank matrix recovery with noise matrix obeying Subbotin density [28, Example 2.13], or the one-bit matrix completion with full observations.

is the zero matrix, the result is trivial. So, we assume that

The last two inequalities imply the desired inequality. The proof is then completed. □

, we recall that a random variable

ξ is called sub-Gaussian if

We call the smallest τ2 satisfying (12) the sub-Gaussian parameter. The tail-probability characterization in (12) enables us to define centered sub-Gaussian random vectors.

To achieve the main result of this section, we need to establish several lemmas. We first take a look at the stationary points of Φλ. Define Ξ:Rn1×n2→R(n1+n2)×(n1+n2) by

By invoking (14), it is easy to get the balance property of the stationary points of Φλ.

Fix an arbitrary λ>0. Any stationary point of Φλ belongs to the set

and consequently the set of local minimizers to the problem (6) is included in Eλ.

For any stationary point (U,V) of Φλ with rank(W)≤r, the following lemma implies a lower bound for ∥WWT−W∗W∗T∥F, whose proof is included in Appendix A.

Write Γ:=(WWT−W∗W∗T)QQT. The result of Lemma 3.2 implies that

Together with (17) and √2∥UVT−U∗V∗T∥F≤∥WWT−W∗W∗T∥F, we have

When the stationary point (U,V) in Lemma 3.2 is strengthened as a local minimizer, we can provide a lower bound for ∥WΔT∥2F where Δ is a special direction defined by

This result is stated in the following lemma, whose proof is included in Appendix B.

Now we are ready to state the main result, which shows that the distance of any local minimizer W with rank at most r to W∗ can be upper bounded via λ and ∥∇F(M)∥.

In addition, from the inequality (21) in Lemma 3.3, it follows that

where the third inequality is due to 2|ab|≤γa2+γ−1b2 for any a,b∈R and any γ>0. From the last two inequalities, it is not hard to obtain that

(i) For the least squares loss (3) with a noiseless and full sampling A, the error bound in Theorem 3.1 becomes ∥UVT−M∥F≤√γ0rλ for each local minimum of (6) with rank([U;V])≤r. On the other hand, by the characterization of the global optimal solution set in [36] for (6) with κ=r, each global optimal (˜U,˜V) with rank([˜U;˜V])≤r satisfies ∥˜U˜VT−M∥F≤√rλ. This shows that the obtained error bound is optimal.

(iii) By combining Theorem 3.1 with Lemma 1 in Appendix C, it follows that each optimal solution ¯¯¯¯¯Xcr of the convex problem (5) with rank(¯¯¯¯¯Xcr)≤r satisfies

Next we illustrate the result of Theorem 3.1 via two specific observation models.

The matrix sensing problem aims to recover the true matrix M via the observation model (4), where the sampling operator A is defined by [A(Z)]i:=⟨Ai,Z⟩ for i=1,…,m, and the entries ω1,…,ωm of the noise vector ω are assumed to be i.i.d. sub-Gaussian of parameter σ2ω. By Definition 2.2 and the discussions in [9, Page 24], for every u∈Rm, there exists an absolute constant ˆc>0 such that with probability at least 1−1n1n2,

Notice that ∇F(M)=1mA∗(ω). By Theorem 3.1, we obtain the following conclusion.

The weighted PCA problem aims to recover an unknown true matrix M∈Rn1×n2 from an elementwise weighted observation Y=H∘(M+E), where H is the positive weight matrix, E is the noise matrix, and ”∘” denotes the Hadamard product of matrices. This corresponds to the observation model (4) with A(Z):=vec(H∘Z) and ω=A(E). We assume that the entries Eij of E are i.i.d. sub-Gaussian random variables of parameter σ2E. By Definition 2.2 and the discussions in [9, Page 24], for every H∈Rn1×n2, there exists an absolute constant ˜c>0 such that with probability at least 1−1n1n2,