A unified capacity analysis of a free-space optical (FSO) link that accounts for nonzero boresight pointing errors and both types of detection techniques (i.e. intensity modulation/direct detection as well as heterodyne detection) is addressed in this work. More specifically, an exact closed-form expression for the moments of the end-to-end signal-to-noise ratio (SNR) of a single link FSO transmission system is presented in terms of well-known elementary functions. Capitalizing on these new moments expressions, we present approximate and simple closed-form results for the ergodic capacity at high and low SNR regimes. All the presented results are verified via computer-based Monte-Carlo simulations. 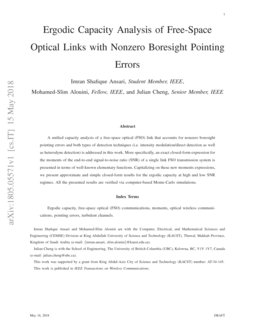 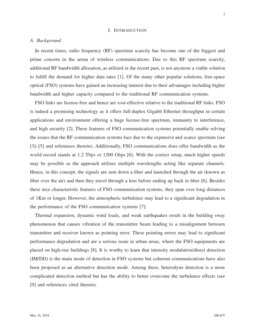 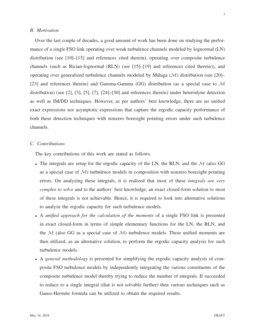 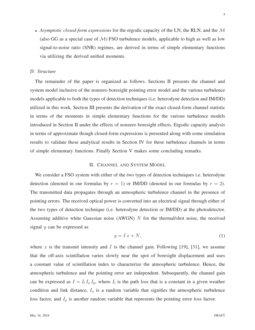 In recent times, radio frequency (RF) spectrum scarcity has become one of the biggest and prime concern in the arena of wireless communications. Due to this RF spectrum scarcity, additional RF bandwidth allocation, as utilized in the recent past, is not anymore a viable solution to fulfill the demand for higher data rates [haykin]. Of the many other popular solutions, free-space optical (FSO) systems have gained an increasing interest due to their advantages including higher bandwidth and higher capacity compared to the traditional RF communication systems.

FSO links are license-free and hence are cost-effective relative to the traditional RF links. FSO is indeed a promising technology as it offers full-duplex Gigabit Ethernet throughput in certain applications and environment offering a huge license-free spectrum, immunity to interference, and high security [popoola]. These features of FSO communication systems potentially enable solving the issues that the RF communication systems face due to the expensive and scarce spectrum (see [peppas1, peppas4, ansari6] and references therein). Additionally, FSO communications does offer bandwidth as the world record stands at 1.2 Tbps or 1200 Gbps [hogan]. With the correct setup, much higher speeds may be possible as the approach utilizes multiple wavelengths acting like separate channels. Hence, in this concept, the signals are sent down a fiber and launched through the air (known as fiber over the air) and then they travel through a lens before ending up back in fiber [hogan]. Besides these nice characteristic features of FSO communication systems, they span over long distances of 1Km or longer. However, the atmospheric turbulence may lead to a significant degradation in the performance of the FSO communication systems [andrews].

Thermal expansion, dynamic wind loads, and weak earthquakes result in the building sway phenomenon that causes vibration of the transmitter beam leading to a misalignment between transmitter and receiver known as pointing error. These pointing errors may lead to significant performance degradation and are a serious issue in urban areas, where the FSO equipments are placed on high-rise buildings [sandalidis2]. It is worthy to learn that intensity modulation/direct detection (IM/DD) is the main mode of detection in FSO systems but coherent communications have also been proposed as an alternative detection mode. Among these, heterodyne detection is a more complicated detection method but has the ability to better overcome the turbulence effects (see [tsiftsis] and references cited therein).

The key contributions of this work are stated as follows.

The remainder of the paper is organized as follows. Sections II presents the channel and system model inclusive of the nonzero boresight pointing error model and the various turbulence models applicable to both the types of detection techniques (i.e. heterodyne detection and IM/DD) utilized in this work. Section III presents the derivation of the exact closed-form channel statistic in terms of the moments in simple elementary functions for the various turbulence models introduced in Section II under the effects of nonzero boresight effects. Ergodic capacity analysis in terms of approximate though closed-form expressions is presented along with some simulation results to validate these analytical results in Section IV for these turbulence channels in terms of simple elementary functions. Finally Section V makes some concluding remarks.

where x is the transmit intensity and I is the channel gain. Following [farid, yang3], we assume that the off-axis scintillation varies slowly near the spot of boresight displacement and uses a constant value of scintillation index to characterize the atmospheric turbulence. Hence, the atmospheric turbulence and the pointing error are independent. Subsequently, the channel gain can be expressed as I=IlIaIp, where Il is the path loss that is a constant in a given weather condition and link distance, Ia

is a random variable that signifies the atmospheric turbulence loss factor, and

Ip is another random variable that represents the pointing error loss factor.

Ip with nonzero boresight effects is given by 111For detailed information on this model of the pointing error and its subsequent derivation, one may refer to [yang3]. [yang3, Eq. (5)]

σs at the receiver, A0 is a constant term that defines the pointing loss, s is the boresight displacement, and Iv(.) represents the vth-order modified Bessel functions of an imaginary argument of the first kind [gradshteyn, Sec. (8.431)].

The PDF of the irradiance Ip with zero boresight effects (i.e. s=0 in (2)) is given by 222For detailed information on this model of the pointing error and its subsequent derivation, one may refer to [farid]. [farid, Eq. (11)]

Now, the joint distribution of

ILN=IlIaLIp can be derived by utilizing

On substituting (4) and (2) appropriately into the integral in (5), following PDF under the influence of nonzero boresight effects is obtained as [yang3, Eq. (10)]

where erfc{.} is the complementary error function [abramowitz, Eq. (7.1.2)]. As a special case, for s=0, the integral in (5) results into the PDF that is in absence of the boresight effects as

Now, with the presence of the nonzero boresight pointing errors whose PDF is given in (2), the combined PDF of IRLN=IlIaRIaLIp is given as

Similarly, the combined PDF of IRLN=IlIaRIaLIp, in presence of zero boresight pointing errors whose PDF is given in (3), is given as

The integrals in (9) and (10), to the best of our knowledge, are not easy to solve and hence the analysis will be resorted based on moments as will be seen in the upcoming sections.

α is a positive parameter related to the effective number of large-scale cells of the scattering process, β is the amount of fading parameter and is a natural number 333A generalized expression of (14) is given in [navas, Eq. (22)] for β

being a real number though it is less interesting due to the high degree of freedom of the proposed distribution (Sec. III of

Now, with the presence of the nonzero boresight pointing errors whose PDF is given in (2), the combined PDF of IM=IlIaMIp is given as

The integral in (13), to the best of our knowledge, is not easy to solve in closed-form and hence the analysis will be resorted based on moments as will be seen in the upcoming sections. Similarly, the combined PDF of IM=IlIaMIp, in presence of zero boresight pointing errors (i.e. s=0 in (13)) whose PDF is given in (3), is known to be given by [navas]