We consider an epidemic change-point detection in a large class of causal time series models, including among other processes, AR(∞), ARCH(∞), TARCH(∞), ARMA-GARCH. A test statistic based on the Gaussian quasi-maximum likelihood estimator of the parameter is proposed. It is shown that, under the null hypothesis of no change, the test statistic converges to a distribution obtained from a difference of two Brownian bridge and diverges to infinity under the epidemic alternative. Numerical results for simulation and real data example are provided. 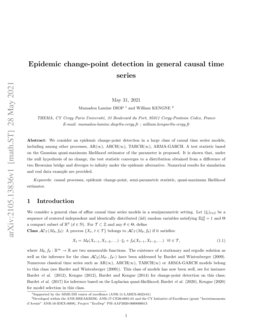 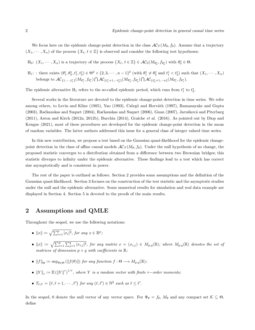 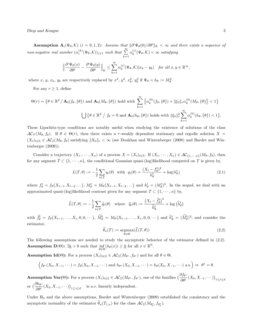 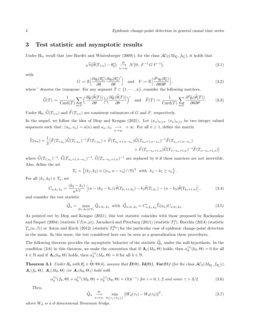 In this paper, we consider the structural change in a class of discrete ...
Mamadou Lamine Diop, et al. ∙

We consider together the retrospective and the sequential change-point d...
Mamadou Lamine Diop, et al. ∙

As an example for the fast calculation of distributional parameters of G...
Jürgen Franke, et al. ∙

where Mθ,fθ:R∞→R are two measurable functions. The existence of a stationary and ergodic solution as well as the inference for the class ACZ(Mθ∗,fθ∗) have been addressed by Bardet and Wintenberger (2009). Numerous classical time series such as AR(∞), ARCH(∞), TARCH(∞) or ARMA-GARCH models belong to this class (see Bardet and Wintenberger (2009)). This class of models has now been well, see for instance Bardet et al. (2012), Kengne (2012), Bardet and Kengne (2014) for change-point detection on this class; Bardet et al. (2017) for inference based on the Laplacian quasi-likelihood; Bardet et al. (2020), Kengne (2020) for model selection in this class.

We focus here on the epidemic change-point detection in the class ACT(Mθ,fθ). Assume that a trajectory (X1,⋯,Xn) of the process {Xt,t∈Z} is observed and consider the following test hypotheses:

The epidemic alternative H1 refers to the so-called epidemic period, which runs from t∗1 to t∗2.

In this new contribution, we propose a test based on the Gaussian quasi-likelihood for the epidemic change-point detection in the class of affine causal models ACT(Mθ,fθ). Under the null hypothesis of no change, the proposed statistic converges to a distribution obtained from a difference between two Brownian bridges; this statistic diverges to infinity under the epidemic alternative. These findings lead to a test which has correct size asymptotically and is consistent in power.

The rest of the paper is outlined as follows. Section 2 provides some assumptions and the definition of the Gaussian quasi-likelihood. Section 3 focuses on the construction of the test statistic and the asymptotic studies under the null and the epidemic alternative. Some numerical results for simulation and real data example are displayed in Section 4. Section 5 is devoted to the proofs of the main results.

Throughout the sequel, we use the following notations:

In the sequel, 0 denote the null vector of any vector space. For Ψθ=fθ,Mθ and any compact set K⊆Θ, define

These Lipschitz-type conditions are notably useful when studying the existence of solutions of the class ACT(Mθ,fθ). If θ∈Θ(r), then there exists a τ-weakly dependent stationary and ergodic solution X=(Xt)t∈Z∈ACZ(Mθ,fθ) satisfying ∥X0∥r<∞ (see Doukhan and Wintenberger (2008) and Bardet and Wintenberger (2009)).

The following assumptions are needed to study the asymptotic behavior of the estimator defined in (2.2). Assumption D(Θ): ∃h––>0 such that infθ∈Θ(hθ(x))≥h–– for all x∈RN.

Under H0 and the above assumptions, Bardet and Wintenberger (2009) established the consistency and the asymptotic normality of the estimator ˆθn(T1,n) for the class ACZ(Mθ∗0,fθ∗0).

where ′ denotes the transpose. For any segment T⊂{1,⋯,n}, consider the following matrices,

Under H0, ˆG(T1,n) and ˆF(T1,n) are consistent estimators of G and F, respectively.

and consider the test statistic

As pointed out by Diop and Kengne (2021), this test statistic coincides with those proposed by Rackauskas and Suquet (2004) (statistic UI(n,ρ)), Jarusková and Piterbarg (2011) (statistic T21), Bucchia (2014) (statistic Tn(α,β)) or Aston and Kirch (2012) (statistic TB2n) for the particular case of epidemic change-point detection in the mean. In this sense, the test considered here can be seen as a generalization these procedures.

where Wd is a d-dimensional Brownian bridge.

-quantile of the distribution of

For asymptotic under the epidemic alternative, the following additional condition is needed.

We have the following result.

This theorem shows that the proposed procedure is consistency in power. An estimator of the change-points t–∗=(t∗1,t∗2) under the epidemic alternative is given by

This section presents some results of a simulation study and a real data example. For a sample size n, the statistic ˆQn is computed with un=[(log(n))5/2] and vn=[(log(n))2] (see also Remark 1 in Kengne (2012)). The empirical levels and powers are obtained after 200 replications at the nominal level α=0.05.

We consider the following models:

We consider the change-point test with an epidemic alternative where the parameter of the model is θ∗0 under H0, and θ∗1, θ∗2 under H1. Firstly, two trajectories of an ARMA(1,1) with mean zero are generated: a trajectory under H0 with θ∗0=(−0.4,−0.25) and a trajectory under H1 with breaks at (t∗1,t∗2)=(150,350), θ∗1=(−0.4,−0.25), θ∗2=(−0.4,0.1). Figure 1 displays the statistic ˆQn,k1,k2. One can see that, for the scenario without change, the values of this statistic are below the horizontal triangle which represents the limit of the critical region (see Figure 1(a)). Under the epidemic alternative, max(k1,k2)∈TnˆQn,k1,k2 is greater than the critical value of the test and is reached around the points where the changes occur (see the dotted lines in Figure 1(b)).

For both the ARMA and GARCH model, we carry out the change-point test with an epidemic alternative where the parameter of the model is θ∗0 under H0, and θ∗1, θ∗2 under H1 with change-points at (t∗1,t∗2)=(0.3n,0.7n) for sample size n=500,1000. The empirical levels and powers are displayed in Table 1. The AR(1) example is related to the real data application, see subsection 4.2. The results in this table show that, the empirical level approaching the nominal one when n increases and the empirical power increases with n and is overall close to one when n=1000. These findings are consistent with the asymptotic results of Theorems 3.1 and 3.2.

We consider the daily concentrations of carbon monoxide in the Vitória metropolitan area. These daily levels are obtained from the State Environment and Water Resources Institute, where the data were collected at eight monitoring stations. There are 455 available observations that represent the average concentrations from September 11, 2009 through December 09, 2010 (see Figure 2(a)). The data are a part of a large dataset (available at https://rss.onlinelibrary.wiley.com/pb-assets/hub-assets/rss/Datasets/RSSC%2067.2/C1239deSouza-1531120585220.zip) which were analyzed by Souza et al. (2018) to quantify the association between respiratory disease and air pollution concentrations.

To test the presence of an epidemic change in this series, we apply our detection procedure with the ARMA(p,q) model. We have applied the test with several values of p and q; and the results after change-point detection show a preference (in the sense of AIC and BIC) for an AR(1). Figure 2(b) displays the values of ˆQn,k1,k2 for all (k1,k2)∈Tn. The critical value on nominal level α=5% is cd,α=5.69 and the resulting test statistic is ˆQn=6.61; which implies that the null hypothesis H0 is rejected (i.e., an epidemic change-point is detected). The vector of the break-points estimated is ˆt–n=(143,330); i.e, the point where the peak in the graph is reached (see Figure 2(b)). The locations of the changes correspond to the dates January 31 and August 06, 2010. This corresponds to the period where the winds are weaker and the austral winter; these meteorological factors are noticeable to increase the concentration of the carbon monoxide. The estimated model on each regime is given by:

where in parentheses are the standard errors of the estimators. From (

4.3), one remark that, the parameter of the first regime is close to that of the third regime; which strengthens the hypothesis of the existence of an epidemic change-point.

5 Proofs of the main results

To simplify the expressions, in this section, we will use the conditional Gaussian quasi-log-likelihood up to multiplication by 1/2, given by L(T,θ):=−∑t∈Tqt(θ) and ˆL(T,θ):=−∑t∈Tˆqt(θ).

Consider the following lemma; we can go along similar lines as in the proof of Lemma 6.3 in Diop and Kengne (2021) to show the part (i). The part (ii) is established in Bardet and Wintenberger (2009).

Suppose that the assumptions of Theorem 3.1 hold. Then,