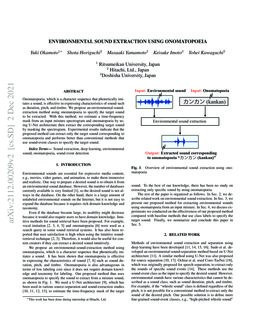 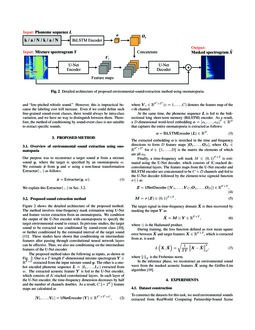 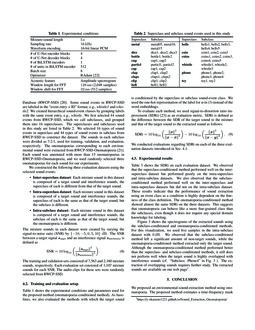 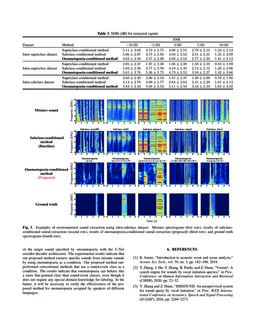 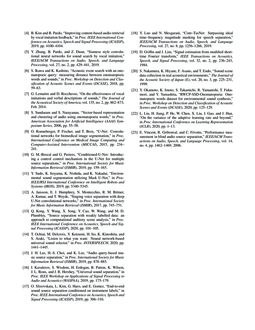 Assessment of sound spatialisation algorithms for sonic rendering with headsets

In many situations, we would like to hear desired sound events (SEs) whi...
Marc Delcroix, et al. ∙

Environmental sounds are essential for expressive media content, e.g., movies, video games, and animation, to make them immersive and realistic. One way to prepare a desired sound is to obtain it from an environmental sound database. However, the number of databases currently available is very limited [10], so the desired sound is not always in the database. On the other hand, there is a large amount of unlabeled environmental sounds on the Internet, but it is not easy to expand the database because it requires rich domain knowledge and taxonomy.

Even if the database became large, its usability might decrease because it would also require users to have domain knowledge. Intuitive methods for sound retrieval have been proposed. For example, vocal imitation [21, 23, 13, 22] and onomatopoeia [2] were used as a search query in some sound retrieval systems. It has also been reported that user satisfaction is high when using the intuitive sound-retrieval technique [21, 23]. Therefore, it would also be useful for content creators if they can extract a desired sound intuitively.

We propose an environmental-sound-extraction method using onomatopoeia, which is a character sequence that phonetically imitates a sound. It has been shown that onomatopoeia is effective in expressing the characteristics of sound [15, 1] such as sound duration, pitch, and timbre. Onomatopoeia is also advantageous in terms of low labeling cost since it does not require domain knowledge and taxonomy for labeling. Our proposed method thus uses onomatopoeia to specify the sound to extract from a mixture sound, as shown in Fig. 1. We used a U-Net architecture [18], which has been used in various source-separation and sound-extraction studies [4, 5, 11, 14], to estimate the time-frequency mask of the target sound. To the best of our knowledge, there has been no study on extracting only specific sound by using onomatopoeia.

The rest of the paper is organized as follows. In Sec. 2, we describe related work on environmental sound extraction. In Sec. 3, we present our proposed method for extracting environmental sounds using onomatopoeia from an input mixture. In Sec. 4, we discuss experiments we conducted on the effectiveness of our proposed method compared with baseline methods that use class labels to specify the target sound. Finally, we summarize and conclude this paper in Sec. 5.

Methods of environmental sound extraction and separation using deep learning have been developed [5, 6, 3, 12]. Sudo et al. developed an environmental-sound-separation method based on U-Net architecture [5]. A similar method using U-Net was also proposed for source separation [4, 19]. Ochiai et al. used Conv-TasNet [16], which was originally proposed for speech separation, to extract only the sounds of specific sound events [6]. These methods use the sound-event class as the input to specify the desired sound. However, environmental sounds have various characteristics that cannot be described as a sound class, such as sound duration, pitch, and timbre. For example, if the “whistle sound” class is defined regardless of the pitch, it is not possible for a conventional method to extract only the sound of the desired pitch. One possible solution is to define more fine-grained sound-event classes, e.g., “high-pitched whistle sound” and “low-pitched whistle sound.” However, this is impractical because the labeling cost will increase. Even if we could define such fine-grained sound-event classes, there would always be intra-class variation, and we have no way to distinguish between them. Therefore, the method of conditioning by sound-event class is not suitable to extract specific sounds.

Our purpose was to reconstruct a target sound x from a mixture sound y, where the target is specified by an onomatopoeia w. We estimate ^\boldmathx from y and w

shows the detailed architecture of the proposed method. The method involves time-frequency mask estimation using U-Net and feature vector extraction from an onomatopoeia. We condition the output of the U-Net encoder with onomatopoeia to specify the target environmental sound to extract. In previous studies, the target sound to be extracted was conditioned by sound-event class

[4], or further conditioned by the estimated interval of the target sound [5]

The proposed method takes the following as inputs, as shown in Fig.  2. One is a T-length F-dimensional mixture spectrogram Y∈RF×T extracted from the input mixture sound y

. The other is a one-hot encoded phoneme sequence

\boldmathL=(\boldmathl1,…,\boldmathlN) extracted from w. The extracted acoustic feature Y is fed to the U-Net encoder, which consists of K-stacked convolutional layers. In each layer of the U-Net encoder, the time-frequency dimension decreases by half and the number of channels doubles. As a result, C(=2K) feature maps are calculated as

where \boldmathVc∈RF′×T′(c=1,…,C) denotes the feature map of the c-th channel.

At the same time, the phoneme sequence L

is fed to the bidirectional long short-term memory (BiLSTM) encoder. As a result, a

D-dimensional word-level embedding \boldmatho=[o1,…,oD]T∈RD that captures the entire onomatopoeia is extracted as follows:

The extracted embedding o is stretched in the time and frequency directions to form D feature maps [\boldmathO1,…,\boldmathOD], where \boldmathOd∈RF′×T′ for d∈{1,…,D} is the matrix the elements of which are all od.

Finally, a time-frequency soft mask M∈(0,1)F×T is estimated using the U-Net decoder, which consists of K-stacked deconvolutional layers. The feature maps from the U-Net encoder and BiLSTM encoder are concatenated to be C+D

The target signal in time-frequency domain

^X is then recovered by masking the input Y as

where ⊙ is the Hadamard product.

During training, the loss function defined as root mean square error between

^X and target features X∈RF×T, which is extracted from x, is used:

where ∥⋅∥F is the Frobenius norm.

In the inference phase, we reconstruct an environmental sound wave from the masked acoustic features ^X using the Griffin–Lim algorithm [9].

To construct the datasets for this task, we used environmental sounds extracted from RealWorld Computing Partnership-Sound Scene Database (RWCP-SSD) [17]. Some sound events in RWCP-SSD are labeled in the “event entry + ID” format, e.g., whistle1 and whistle2. We created hierarchical sound-event classes by grouping labels with the same event entry, e.g., whistle. We first selected 44 sound events from RWCP-SSD, which we call subclasses, and grouped them into 16 superclasses. The superclasses and subclasses used in this study are listed in Table 2. We selected 16 types of sound events in superclass and 44 types of sound events in subclass from RWCP-SSD to construct the dataset. The sounds in each subclass were divided as 7:2:1, used for training, validation, and evaluation, respectively. The onomatopoeias corresponding to each environmental sound were extracted from RWCP-SSD-Onomatopoeia [8]. Each sound was annotated with more than 15 onomatopoeias in RWCP-SSD-Onomatopoeia, and we used randomly selected three onomatopoeias for each sound for our experiments.

{−10,−5,0,5,10} dB. The SNR between a target signal starget and an interference signal sinterference is defined as

Table 1 shows the experimental conditions and parameters used for the proposed method (onomatopoeia-conditioned method). As baselines, we also evaluated the methods with which the target sound is conditioned by the superclass or subclass sound-event class. We used the one-hot representation of the label for o in (3) instead of the word embeddings.

To evaluate each method, we used signal-to-distortion ratio improvement (SDRi) [20]

We conducted evaluations regarding SDRi on each of the three evaluation datasets introduced in Sec. 4.1.