Enumeration of regular graphs by using the cluster in high efficiency

In this note, we proposed a method to enumerate regular graphs on the cluster in high efficiency after partitioning. Here, we chose the GENREG, a classical regular graph generation, to adapt with supercomputers and clusters by using MPI, which can implement loading balance and support the parallel scale of thousands of CPU cores after task partitioning. Using this method and modified version of the generation, we have got some optimal regular graphs with the minimum diameter. Moreover, we got the exact counting number of 4-regular graphs for order 23, which expand the sequence of A006820 in OEIS. This study improves the efficiency of enumerating regular graphs with current available HPC resources and makes the work of regular graph counting more convenient on the supercomputer. 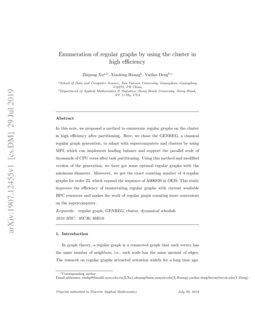 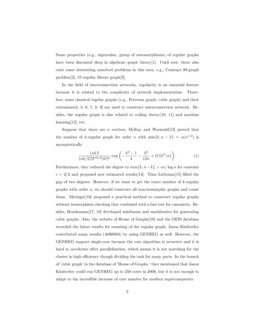 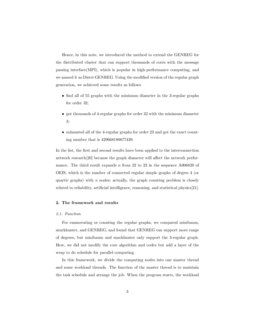 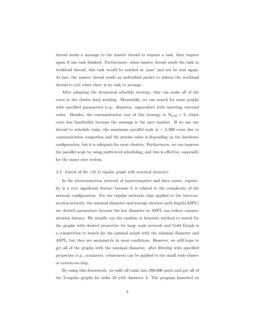 A new record of enumeration of regular graphs by parallel processing

We broke a record, set 8 years ago, in the enumeration of non-isomorphic...
Zhipeng Xu, et al. ∙

A new record of graph enumeration enabled by parallel processing

The Complexity of Counting Edge Colorings for Simple Graphs

We show that there is no subexponential time algorithm for computing the...
Saeed Akhoondian Amiri, et al. ∙

A Structured Table of Graphs with Special Properties

In the field of interconnection networks, regularity is an essential feature because it is related to the complexity of network implementation. Therefore, some classical regular graphs (e.g., Peterson graph, cubic graph) and their extensionsDasa ; Ohringa ; Ohring1993 ; Seo2011 ; Seo2017 ; Seo2008 are used to construct interconnection network. Besides, the regular graph is also related to coding theoryRybin2018 ; Rosenthala

Suppose that there are n vertices, McKay and WormaldMcKay1991 proved that the number of k-regular graph for order n with min{k,n−k}=o(n1/2) is asymptotically

Furthermore, they reduced the degree to min{k,n−k}>cn/logn for constant c>2/3

McKay1990 . Then LiebenauLiebenau2017 filled the gap of two degrees. However, if we want to get the exact number of k-regular graphs with order n, we should construct all non-isomorphic graphs and count them. MeringerMeringer1999 proposed a practical method to construct regular graphs without isomorphism checking that combined with a fast test for canonicity. Besides, BrankmannBrinkmann1996 ; Brinkmann2017 developed minibaum and snarkhunter for generating cubic graphs. Also, the website of ’House of Graphs’Brinkmann2013 and the OEIS database recorded the latest results for counting of the regular graph, Jason Kimberley contributed many results (A068934) by using GENREG as well. However, the GENREG support single-core because the core algorithm is recursive and it is hard to accelerate after parallelization, which means it is not matching for the cluster in high efficiency though dividing the task for many parts. In the branch of ’cubic graph’ in the database of ’House of Graphs,’ they mentioned that Jason Kimberley could run GENREG up to 250 cores in 2009, but it is not enough to adapt to the incredible increase of core number for modern supercomputers.

Hence, in this note, we introduced the method to extend the GENREG for the distributed cluster that can support thousands of cores with the message passing interface(MPI), which is popular in high-performance computing, and we named it as Distri-GENREG. Using the modified version of the regular graph generation, we achieved some results as follows

In the list, the first and second results have been applied to the interconnection network researchDeng2019 because the graph diameter will affect the network performance. The third result expands n from 22 to 23 in the sequence A006820 of OEIS, which is the number of connected regular simple graphs of degree 4 (or quartic graphs) with n

2 The framework and results

For enumerating or counting the regular graphs, we compared minibaum, snarkhunter, and GENREG, and found that GENREG can support more range of degrees, but minibaum and snarkhunter only support the 3-regular graph. Here, we did not modify the core algorithm and codes but add a layer of the wrap to do schedule for parallel computing.

After adapting the dynamical schedule strategy, that can make all of the cores in the cluster keep working. Meanwhile, we can search for some graphs with specified parameters (e.g., diameter, eigenvalue) with inserting external codes. Besides, the communication cost of this strategy is Ntask×2, which costs less bandwidth because the message is the part number. If we use one thread to schedule tasks, the maximum parallel scale is ∼3,000 cores due to communication congestion and the precise value is depending on the hardware configuration, but it is adequate for most clusters. Furthermore, we can improve the parallel scale by using multi-level scheduling, and this is effective, especially for the many-core system.

2.2 Search of the (32,3)-regular graph with minimal diameter

In the interconnection network of supercomputer and data center, regularity is a very significant feature because it is related to the complexity of the network configuration. For the regular networks that applied to the interconnection network, the minimal diameter and average shortest path length(ASPL) are desired parameters because the low diameter or ASPL can reduce communication latency. We usually use the random or heuristic method to search for the graphs with desired properties for large scale network and Gold Graph is a competition to search for the optimal graph with the minimal diameter and ASPL, but they are asymmetric in most conditions. However, we still hope to get all of the graphs with the minimal diameter, after filtering with specified properties (e.g., symmetry, robustness) can be applied to the small scale cluster or system-on-chip.

By using this framework, we split all tasks into 200,000 parts and got all of the 3-regular graphs for order 32 with diameter 4. The program launched on Shenwei-Bluelight supercomputer with ∼80,000 cores for ∼72 hours and picked up 55 graphs with diameter 4 after exhausted 18941522184590 graphs that agree with RobinsonRobinson1983 , then DengDeng2019 applied one(Fig.2(a)) of these graphs to the beowulfBE2003 cluster named as ’Taishan’ and the benchmark results show that the graph with the minimal diameter can enhance the performance than other classical topologies. Fig.2(b) shows the distribution of generated graph numbers for all parts, which look like tailed Gauss distribution and most parts contain ∼1×108 graphs and the number fluctuated in an extensive range. Therefore if we do not introduce dynamical scheduling but using static task arrangement, we should spend more time to get these results.

When we plan to find all of the 4-regular graphs with the minimum diameter for order 32, it is unlucky there is no counting result for this scale when girth≤5, but we still can use this software to search for the regular graphs with small diameter as shown in Fig2(a) though we can’t see the endpoint the road. Therefore, we verified the results in Table.1 after splitting the problem into 50,000 parts and setting the split-level as 12, then promoted n of the sequence A006820 from 22 to 23 and confirmed the number of 4-regular graphs for order 23 is 429,668,180,677,439 by using Distri-GENREG with same parameters. RobinsonRobinson1983 presented all of the counting numbers of 3-regular graphs up to order 40 in 1983, but he also pointed out that the enumeration of k-regular(k>3) is complicated and there did not exist an efficient method. Then Markus Meringer and Jason Kimber used the GENREG to generate and count up the quartic graphs up to order 22 in 2011Larrion2016 , and this problem remained stagnant for many years. With the development of high-performance computing, that provides the chance that we can refocus and promote the problem by using more powerful supercomputers.

This work cost almost 99 core-year, and SeaWulf, Tianhe-1A, Yachay joined in this work. Fig.3 presents the computing time for each cluster that pure CPU nodes (Intel Xeon Gold 6148 ×2) in Seawulf contribute most results, Tianhe-1A and Yachay (IBM Power8 rev 2.0) also work well for this program, but we didn’t use GPU in these two machines. Also, the task parts for the three clusters overlapped in a small range to prevent the impact from different systems.

In this paper, we presented the method to transport the GENREG to cluster and support the thousands of CPU cores. Then, we used it to got some optimal graphs for order 32 and calculated the exact number for 4-regular graphs for order 23. Above all, we can see that this framework is useful to solve intractable problems for the regular graph. Finally, we also decide to open our source code in GitHub(https://github.com/xuzhipengnt/distri-GENREG) to attract more researchers to join in the area of regular graph counting.