Entropy versus influence for complex functions of modulus one 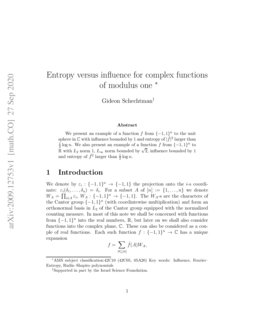 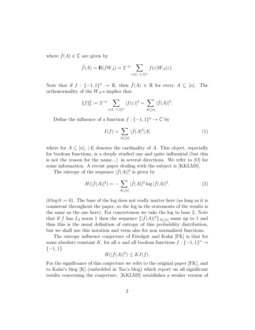 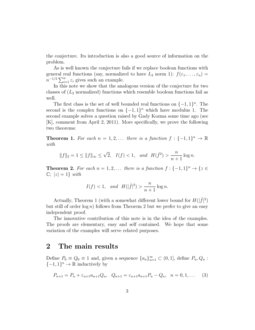 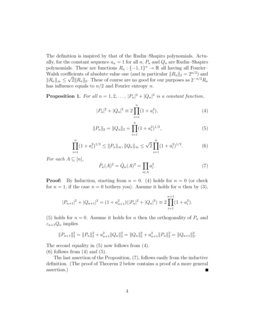 We denote by εi:{−1,1}n→{−1,1} the projection onto the i-s coordinate: εi(δ1,…,δn)=δi. For a subset A of [n]:={1,…,n} we denote WA=∏i∈Aεi, WA:{−1,1}n→{−1,1}. The WA-s are the characters of the Cantor group {−1,1}n (with coordintewise multiplication) and form an orthonormal basis in L2 of the Cantor group equipped with the normalized counting measure. In most of this note we shall be concerned with functions from {−1,1}n into the real numbers, R, but later on we shall also consider functions into the complex plane, C. These can also be considered as a couple of real functions. Each such function f:{−1,1}n→C has a unique expansion

where for A⊆[n], |A| denotes the cardinality of A. This object, especially for boolean functions, is a deeply studied one and quite influential (but this is not the reason for the name…) in several directions. We refer to [O] for some information. A recent paper dealing with the subject is [KKLMS].

The entropy of the sequence |^f(A)|2 is given by

(0log0:=0). The base of the log does not really matter here (as long as it is consistent throughout the paper, so the log in the statements of the results is the same as the one here). For concreteness we take the log to base 2. Note that if f has L2 norm 1 then the sequence {|^f(A)|2}A⊆[n] sums up to 1

and thus this is the usual definition of entropy of this probability distribution, but we shall use this notation and term also for non normalized functions.

The entropy influence conjecture of Friedgut and Kalai [FK] is that for some absolute constant K, for all n and all boolean functions f:{−1,1}n→{−1,1}

For the significance of this conjecture we refer to the original paper [FK], and to Kalai’s blog [K] (embedded in Tao’s blog) which report on all significant results concerning the conjecture. [KKLMS] establishes a weaker version of the conjecture. Its introduction is also a good source of information on the problem.

As is well known the conjecture fails if we replace boolean functions with general real functions (say, normalized to have L2 norm 1): f(ε1,…,εn)=n−1/2∑ni=1εi gives such an example.

In this note we show that the analogous version of the conjecture for two classes of (L2 normalized) functions which resemble boolean functions fail as well.

Actually, Theorem 1 (with a somewhat different lower bound for H(|^f|2) but still of order logn) follows from Theorem 2 but we prefer to give an easy independent proof.

The innovative contribution of this note is in the idea of the examples. The proofs are elementary, easy and self contained. We hope that some variation of the examples will serve related purposes.

After the first version of this note was posted, Joe Neeman sent me a simpler proof of Theorem 1 (with different constants). See the remark at the end of this note. Also, an anonymous referee wrote that theorem 2 was known to experts but not published. No hint was given for the construction.

Consequently, this note will not be further sent for publication (at least in the near future).

The definition is inspired by that of the Rudin–Shapiro polynomials. Actually, for the constant sequence an=1 for all n, Pn and Qn are Rudin–Shapiro polynomials. These are functions Rn:{−1,1}n→R all having all Fourier–Walsh coefficients of absolute value one (and in particular ∥Rn∥2=2n/2) and ∥Rn∥∞≤√2∥Rn∥2. These of course are no good for our purposes as 2−n/2Rn has influence equals to n/2 and Fourier entropy n.

(5) holds for n=0. Assume it holds for n then the orthogonality of Pn and εn+1Qn implies

The last assertion of the Proposition, (7), follows easily from the inductive definition. (The proof of Theorem 2 below contains a proof of a more general assertion.)

The proof for I(Qn+1) is almost identical.

It follows that putting K=∑ni=1a2i,

Proof:  By the last assertion of Proposition 1

Also, the absolute values of the Fourier–Walsh coefficients are preserved under taking conjugates and in particular,

This is easily proved by induction on n: Assuming the assertion for n then by (3),

It follows from (the proof of) Proposition 3 that

So the ratio between the Fourier entropy and the influence tends to infinity with n whenever a=o(n) (and is of order logn whenever a<nc for some c<1).

Joe Neeman pointed out to me that the following is also an example of a well bounded real function with bounded influence and entropy of order logn:

(Stricktly speaking, one needs to normalize f to have L2 norm exactly 1. This does not cause any complication.)