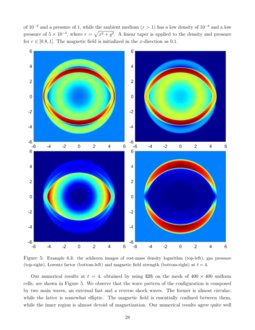 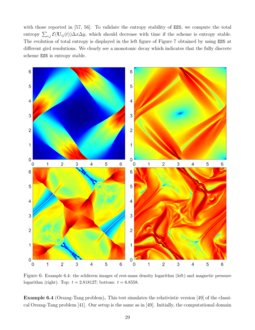 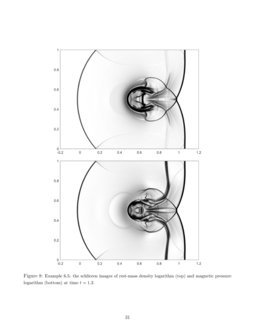 We propose a new representation of the offsets of the Lempel-Ziv (LZ) fa...
Dominik Köppl, et al. ∙

In many applications, it is impractical—if not even impossible—to obtain...
Jan Glaubitz, et al. ∙

Magnetohydrodynamics (MHDs) describe the dynamics of electrically-conducting fluids in the presence of magnetic field and play an important role in many fields including astrophysics, plasma physics and space physics. In many cases, astrophysics and high energy physics often involve fluid flow at nearly speed of light so that the relativistic effect should be taken into account. Relativistic MHDs (RMHDs) have applications in investigating astrophysical scenarios from stellar to galactic scales, e.g., gamma-ray bursts, astrophysical jets, core collapse super-novae, formation of black holes, and merging of compact binaries.

In the d-dimensional space, the governing equations of special RMHDs can be written as a system of hyperbolic conservation laws

along with an additional divergence-free condition on the magnetic field

where d=1, 2 or 3. Here we employ the geometrized unit system so that the speed of light c in vacuum is equal to one. In (1.1

U=(D,m⊤,B⊤,E)⊤, and the flux in the xi-direction is defined by

with the mass density D=ργ, the momentum density vector m=(ρhγ2+|B|2)v−(v⋅B)B, the energy density E=ρhγ2−ptot+|B|2, and the vector ei denoting the i-th column of the unit matrix of size 3. Additionally, ρ is the rest-mass density, v=(v1,v2,v3)⊤ denotes the fluid velocity vector, γ=1/√1−|v|2 is the Lorentz factor, ptot is the total pressure containing the gas pressure p and magnetic pressure pm:=12(γ−2|B|2+(v⋅B)2), h=1+e+pρ represents the specific enthalpy, and e is the specific internal energy. Different from the non-relativistic case, the variables m and E depend on the magnetic field B nonlinearly. The system (1.1) is closed with an equation of state. In this paper, we consider the ideal equation of state p=(Γ−1)ρe, where Γ is constant and denotes the adiabatic index.

The system (1.1) involves strong nonlinearity, making its analytic treatment quite difficult. Numerical simulation is a primary approach to explore physical laws in RMHDs. Since nearly 2000s, numerical study of RMHD has attracted considerable attention, and various numerical methods have been developed for the RMHD equations, for example, the total variation diminishing scheme [2], adaptive mesh methods [49, 31], discontinuous Galerkin methods [57, 58], entropy limited appraoch [28] and the high-order schemes based on subluminal reconstruction [4], etc. Recently, physical-constraints-preserving schemes were proposed for relativistic hydrodynamics [55, 51] and RMHDs [56], A systematic review of numerical RMHD schemes can be found in [39]. Besides the standard difficulty in solving the nonlinear hyperbolic systems, an additional numerical challenge for the RMHD system (1.1) comes from the divergence-free condition (1.2), which is also involved in the non-relativistic ideal MHD system. Numerical preservation of (1.2) is highly non-trivial (for d≥2) but crucial for the robustness of numerical computation. Numerical experiments and analysis in the non-relativistic MHD case indicated that violating the divergence-free condition (1.2) may lead to numerical instability and nonphysical solutions [9, 3, 52]. Various numerical techniques were proposed to reduce or control the effect of divergence error; see, e.g., [19, 44, 48, 15, 3, 36, 37, 58, 53, 54].

Due to the nonlinear hyperbolic nature of the RMHD equations (1.1), solutions of (1.1) can be discontinuous with the presence of shocks or contact discontinuities. This leads to consideration of weak solutions. However, the weak solutions may not be unique. To select the “physically relevant” solution among all weak solutions, entropy conditions are usually imposed as the admissibility criterion. In the case of RMHD equations (1.1), there is a natural entropy condition arising from the second law of thermodynamics which should be respected. It is natural to seek entropy stable numerical schemes which satisfy a discrete version of entropy condition. Entropy stable numerical methods ensure that the entropy is conserved in smooth regions and dissipated across discontinuities. Thus, the numerics precisely follow the physics of the second law of thermodynamics and can be more robust. Moreover, entropy stable schemes also allow one to limit the amount of dissipation added to the schemes to guarantee the entropy stability. For the above reasons, developing entropy stable schemes for RMHD equations (1.1) is meaningful and highly desirable.

This paper aims to present entropy analysis and high-order accurate entropy stable finite difference schemes for RMHD equations on Cartesian meshes. In comparison with the non-relativistic MHD case, the difficulties in this work mainly come from (i) the unclear symmetrizable form of RMHD equations that admits an entropy pair, and (ii) the highly nonlinear coupling between RMHD equations (1.1), which leads to no explicit expression of the primitive variables (ρ,v,p), entropy variables and the flux Fi in terms of U. The effort and findings in this work include the following:

The paper is organized as follows. After giving the entropy analysis in Sect. 2, we derive the explicit two-point entropy conservative fluxes in Sect. 3. One-dimensional (1D) entropy conservative schemes and entropy stable schemes are constructed in Sect. 4, and their extensions to two dimensions (2D) are presented in Sect. 5. We conduct numerical tests in Sect. 6 to verify the performance of the proposed high-order accurate entropy stable schemes, before concluding the paper in Sect. 7.

First, let us recall the definition of entropy function.

A convex function E(U) is called an entropy for the system (1.1) if there exist entropy fluxes Qi(U) such that

where the gradients E′(U) and Q′i(U) are written as row vectors, and F′i(U) is the Jacobian matrix. The functions (E,Qi) form an entropy pair.

If a hyperbolic system of conservation laws admits an entropy pair, then the smooth solutions of the system should satisfy

For non-smooth solutions, the above identity does not hold in general and is replaced with an inequality

which is interpreted in the week sense and known as the entropy condition.

The existence of an entropy pair is closely related to the symmetrization of a hyperbolic system of conservation laws [26].

The system (1.1) is said to be symmetrizable if there exists a change of variables U→W which symmetrizes it, that is, the equations (1.1) become

A necessary and sufficient condition for the system (1.1) to possess a strictly convex entropy E(U) is that there exists a change of dependent variables U→W which symmetrizes (1.1).

It is natural to ask whether the RMHD equations (1.1) admit an entropy pair or not.

Let us consider the thermodynamic entropy S=ln(pρ−Γ). For smooth solutions, the RMHD equations (1.1) can be used to derive an equation for ργS:

Then under the divergence-free condition (1.2), the following quantities

satisfy an additional conservation law for smooth solution, thus E may be an entropy function.

Since E cannot be explicitly expressed by U, direct derivation of E′(U) can be quite difficult. Here we consider the following primitive variables

As E and U can be explicitly formulated in terms of V, it is easy to derive that

denote the zero square matrix and the identity matrix of size

We only prove the conclusions for i=1, as the proofs for 2≤i≤d are similar.

Let us first show that ∂Fi∂W is not symmetric in general. Because F1 cannot be formulated explicitly in terms of W, we calculate the Jacobian matrix F1(W) with the aid of primitive variables V. The Jacobian matrix ∂F1∂V is computed as

Since W can be explicitly expressed in terms of V, one can derive that

By the chain rule

∂F1∂W=∂F1∂V∂V∂W, we get the expression of ∂F1∂W and find it is not symmetric in general. For example, the (2,6) element of the Jacobian matrix ∂F1∂W is

The proof for i=1 is complete. Similar arguments yield the conclusions for 2≤i≤d. ■

To address the above issue, we propose a modified RMHD system

The system (2.13) can be considered as the relativistic extension of the Godunov–Powell system [27, 44] in the ideal non-relativistic MHDs. The right-hand side term of (2.13) is proportional to ∇⋅B. This means, at the continuous level, the modified form (2.13) and conservative form (1.1) are equivalent under the condition (1.2). However, the “source term” S(U)∇⋅B modifies the character of the RMHD equations, making the system (2.13) symmetrizable and admit the convex entropy pair (E,Qi), as shown below.

In addition, the gradient of ϕ(W) with respect to W equals S⊤, i.e.,

which satisfy ψi=φvi, i=1,…,d. In terms of the variables W, the gradients of φ and ψi satisfy the following identities

We now show that the functions (E,Qi) defined in (2.5) form an entropy pair of the modified RMHD system (2.13). The Jacobian matrix of the system (2.13) in xi-direction is given by

We note that, in the modified RMHD system (2.13), the induction equation is given by ∂B∂t+∇⋅(vB⊤−Bv⊤)+v∇⋅B=0. Taking the divergence of this equation gives

Combining the continuity equation of (2.13), it yields

Equation (2.21) implies that the quantity ∇⋅Bργ is constant along particle paths. Similar property holds for the Godunov–Powell modified system in the non-relativistic ideal MHDs [27, 44]. Following Powell’s perspective for the non-relativistic ideal MHDs [44], it reasonable to conjecture that suitable discretization of the modified RMHD system (2.13) can provide more stable numerical simulation as the numerical divergence error may be advected away by the flow.

For i=1,2,3, a consistent two-point numerical flux F⋆i(UL,UR) is entropy conservative if

Now, we would like to construct explicit entropy conservative fluxes F∗i(UL,UR) satisfying the condition (3.1). For notational convenience, we employ

to denote, respectively, the jump and the arithmetic mean of a quantity. In addition, we also need the logarithmic mean

which was first introduced in [34]. Then, one has following identities

which will be frequently used in the following derivation.

Let us introduce the following set of variables

An explicit two-point entropy conservative flux for i=1 is given below.

Then the numerical flux given by

In terms of the parameter variables z=(ρ,u,H,β)⊤, the entropy variables W in (2.6) can be explicitly expressed as

and ψ1 and ϕ can be expressed as

Substituting the above expressions of jumps into (3.7) gives