Structure-preserving finite-difference schemes for general nonlinear fourth-order parabolic equations on the one-dimensional torus are derived. Examples include the thin-film and the Derrida-Lebowitz-Speer-Spohn equations. The schemes conserve the mass and dissipate the entropy. The scheme associated to the logarithmic entropy also preserves the positivity. The idea of the derivation is to reformulate the equations in such a way that the chain rule is avoided. A central finite-difference discretization is then applied to the reformulation. In this way, the same dissipation rates as in the continuous case are recovered. The strategy can be extended to a multi-dimensional thin-film equation. Numerical examples in one and two space dimensions illustrate the dissipation properties. 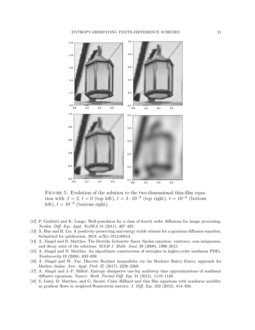 In this paper, an energy-consistent finite difference scheme for the com...
Haruhisa Iijima, et al. ∙

In this paper, we present a reformulation of Mickens' rules for nonstand...
Marc Songolo, et al. ∙

The design of numerical schemes that preserve the structure of the associated partial differential equations is an important task in numerical mathematics. In this paper, we develop new finite-difference approximations conserving the mass, preserving the positivity, and dissipating the entropy of nonlinear fourth-order parabolic equations of the type

where T=R/Z is the one-dimensional torus, a, b∈R, and β≥0, together with the initial condition u(0)=u0 in T. We also discuss briefly the discretization of multi-dimensional equations; see Section 4.

which models the flow of a thin liquid along a solid surface with film height u(x,t) or the thin neck of a Hele-Shaw flow in the lubrication approximation [1]. The multi-dimensional version is given by ∂tu=−div(uβ∇Δu) and its discretization will be discussed in Section 4. Another example (with a=−2, b=1, β=0) is the Derrida–Lebowitz–Speer–Spohn (DLSS) equation

which arises as a scaling limit of interface fluctuations in spin systems [7] and describes the evolution of the electron density u(x,t) in a quantum semiconductor under simplifying assumptions.

Equations (2) and (3) conserve the mass ∫Tu(x,t)dx and preserve the positivity of the solution, even for the corresponding multi-dimensional versions [6, 14]. They also dissipate the entropy111Strictly speaking, equation (1) produces entropy and dissipates energy, but the notion entropy dissipation seems to be common in numerical schemes. in the sense that there exists a Lyapunov functional S(t)=∫Ts(u(x,t))dx with entropy density s(u) such that the entropy production −dS/dt

The proof of the dissipation of the entropy is based on suitable integrations by parts and the chain rule [15]. On the discrete level, we face the problem that the chain rule is generally not available. We are aware of two general strategies.

The first strategy is to exploit the gradient-flow structure of the parabolic equation (if it exists). It involves only one integration by parts, and the discrete chain rule can be formulated by means of suitable mean functions. This idea was elaborated as the Discrete Variational Derivative Method for finite-difference approximations [11]. The gradient-flow formulation (with respect to the L2-Wasserstein metric) yields a natural semi-discretization in time of the evolution using the minimizing movement scheme in finite-dimensional spaces from finite-volume or finite-difference approximations. These techniques were used in [8, 13, 19, 20] for the multi-dimensional DLSS equation. It allows for the proof of entropy dissipation of the Shannon entropy and the Fisher information ∫T(√u)2xdx, but not for general Rényi entropies, since no Wasserstein gradient-flow formulation seems to be available for these functionals. The thin-film equation with 0<β<1 is shown in [18] to be a gradient flow with respect to a weighted Wasserstein metric. In the work [22], a finite-difference scheme that dissipates the discrete H1 norm of the solution to the one-dimensional thin-film equation was analyzed.

The minimizing movement scheme is based on the implicit Euler method. We mention that higher-order time discretizations were investigated too, in the framework of semi-discrete problems; see [4] using the two-step BDF method and [17] using one-leg multistep generalizations. A generic framework for Galerkin methods in space and discontinuous Galerkin methods in time was presented in [9].

The second strategy uses time-continuous Markov chains on finite state spaces. Birth-death processes that define the Markov chain can be interpreted as a finite-volume discretization of a one-dimensional Fokker–Planck equation, and the dissipation of the discrete Shannon entropy can be proved. The nonlinear integrations by parts are reduced to a discrete Bochner-type inequality

[5, 10, 16], which is obtained by identifying the Radon–Nikodym derivative of a measure involving the jump rates of the Markov chain [3, Section 2]. It seems that this idea is restricted to linear diffusion equations.

In this paper, we suggest a third strategy. The idea is to write the flux J as a combination of derivatives of the function s′(u). This allows for integrations by parts that can be extended to the discrete level and it avoids the application of the chain rule. More precisely, we determine two functions A and B depending on v:=s′(u) and its derivatives such that J=Ax−vBx. The function s′(u) is known in thermodynamics as the chemical potential, and the formulation of the flux in terms of the chemical potential seems to be natural from a thermodynamic viewpoint. We apply this idea to fourth-order parabolic equations for the first time. It turns out that for s=sα with α≠1, we can write

The task is to show that the integrand, written as a polynomial in (ξ1,ξ2), is nonnegative for all values of (ξ1,ξ2)∈R2. It follows from the product rule (vvx)x=vvxx+v2x that, for α≠1,

Under certain conditions on the parameters, we expect that the integrand is bounded from below by uα+β(ξ22+ξ41), up to a factor, which yields some gradient estimates.

On the discrete level, we imitate this idea: The flux J=Ax−vBx and the variables ξ1, ξ2 of the polynomials A and B is discretized by central finite differences. For this, let Th=T/(hZ) be a discrete torus with grid size h>0 and define the scheme

with the initial condition ui(0)=u0(i) for i∈Th, where ui=u(i), vi=s′(ui), and Ai and Bi are the polynomials A and B, evaluated at i∈Th, respectively; see (19). We show below that with the discrete entropy Shα=h∑i∈Thsα(u), the discrete analog of (5) becomes

where ξ1,i, ξ2,i approximate vx(i)/v(i), vxx(i)/v(i), respectively. This yields exactly the polynomial of the continuous case. Thus, we obtain the same conditions on the parameters as for the continuous equation.

A drawback of our technique is that scheme (6) depends on the entropy to be dissipated. The scheme does not dissipate all admissible entropies. In applications, however, one usually wants to dissipate only that entropy which is physically relevant.

Our main results can be sketched as follows:

To prepare the discretization, we need to analyze the entropy dissipation properties of the continuous equation (1). We show first that J can be written as Ax−vBx with v=s′α(u) and functions A and B which depend on v, vx, and vxx.

with λ4∈R being a free parameter.

The lemma shows in particular that the formulation J=Ax−vBx is not unique. This fact is used to optimize later the range of admissible parameters α, β, a, and b.

Inserting these expressions into Ax−vBx and simplifying leads to

We identify the coefficients with those in the expression (1) for J:

Next, let α=0. The ansatz for A and B becomes

Identifying the coefficients with those in (1) again gives a linear system for the parameters (λ1,λ2,λ3,λ4). The general solution reads as

For the following theorem, we recall definition (4) of sα and set Sα(u)=∫Tsα(u)dx.

and there exists another constant C(α,β)>0 such that for all t>0,

Let first α≥0 with α≠1. We calculate the time derivative of the entropy, using integration by parts twice:

We choose the optimal value of λ4 by computing the critical value of f:

and it is positive for all α≠1. Therefore, there exists k(α)>0 such that

It remains to analyze the case α=1. Here, we cannot formulate the flux as J=Ax−vBx with v=s′1(u)=logu, since J does not contain logarithmic terms. Our idea is to write J=Ax−wBx with w=−u−1 and functions A and B that depend on w, wx, and wxx. The time derivative of the entropy S1 can be written in terms of w and its derivatives only, since the logarithmic term v=logu only appears with its derivatives.

The formulation J=Ax−wBx corresponds to the expression used for α=0. In fact, we have

where λ1,λ2,λ3 are given by (11) and λ4 is a free parameter. As before, the time derivative becomes

The result of Theorem 2 can be also derived by the method of systematic integration by parts of [15]. Our proof is taylored in such a way that it can be directly “translated” to the discrete level. Indeed, the method of [15] needs several chain rules that are not available on the discrete level and our technique needs to be used.