We prove that the classical capacity of an arbitrary quantum channel assisted by a free classical feedback channel is bounded from above by the maximum average output entropy of the quantum channel. As a consequence of this bound, we conclude that a classical feedback channel does not improve the classical capacity of a quantum erasure channel, and by taking into account energy constraints, we conclude the same for a pure-loss bosonic channel. The method for establishing the aforementioned entropy bound involves identifying an information measure having two key properties: 1) it does not increase under a one-way local operations and classical communication channel from the receiver to the sender and 2) a quantum channel from sender to receiver cannot increase the information measure by more than the maximum output entropy of the channel. This information measure can be understood as the sum of two terms, with one corresponding to classical correlation and the other to entanglement. 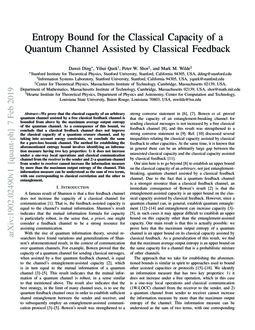 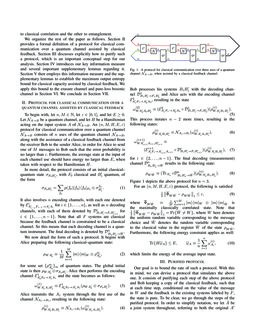 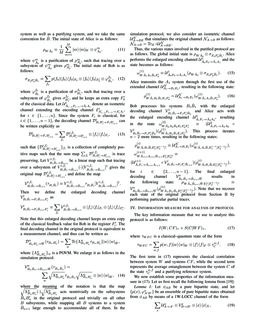 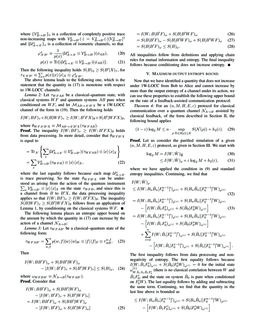 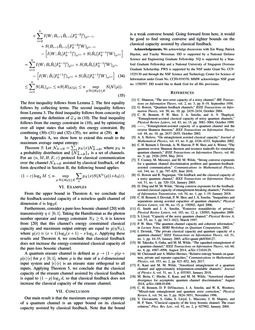 Based on Arimoto's work in 1978, we propose an iterative algorithm for c...
Haobo Li, et al. ∙

In this paper, we compute the exact value of the classical capacity and ...
Cédric Arhancet, et al. ∙

We present a scheme to produce shockwaves in quantum fields by means of ...
Aida Ahmadzadegan, et al. ∙

On entanglement assistance to a noiseless classical channel

For a classical channel, neither the Shannon capacity, nor the sum of co...
Péter E. Frenkel, et al. ∙

A famous result of Shannon is that a free feedback channel does not increase the capacity of a classical channel for communication [1]. That is, the feedback-assisted capacity is equal to the channel’s mutual information. Shannon’s result indicates that the mutual information formula for capacity is particularly robust, in the sense that, a priori, one might consider a feedback channel to be a strong resource for assisting communication.

The approach that we take for establishing the aforementioned bounds is similar in spirit to approaches used to bound other assisted capacities or protocols [15, 16, 17, 18]. We identify an information measure that has two key properties: 1) it does not increase under a free operation, which in this case is a one-way local operations and classical communication (1W-LOCC) channel from the receiver to the sender, and 2) a quantum channel from sender to receiver cannot increase the information measure by more than the maximum output entropy of the channel. This information measure can be understood as the sum of two terms, with one corresponding to classical correlation and the other to entanglement.

We organize the rest of the paper as follows. Section II provides a formal definition of a protocol for classical communication over a quantum channel assisted by classical feedback. Section III discusses explicitly how to purify such a protocol, which is an important conceptual step for our analysis. Section IV introduces our key information measure and several important supplementary lemmas regarding it. Section V then employs this information measure and the supplementary lemmas to establish the maximum output entropy bound for classical capacity assisted by classical feedback. We apply this bound to the erasure channel and pure-loss bosonic channel in Section VI. We conclude in Section VII.

ε. Furthermore, the average state at the input of each channel use should have energy no larger than E, when taken with respect to the Hamiltonian H.

In more detail, the protocol consists of an initial classical–quantum state σF0B′1, with F0 classical and B′1 quantum, of the form

We now detail the form of such a protocol. It begins with Alice preparing the following classical–quantum state:

for some set {ρmA′0}m of quantum states. The global initial state is then ρWA′0⊗σF0B′1. Alice then performs the encoding channel E1A′0F0→A′1A1 and the state becomes as follows:

Alice transmits the A1 system through the first use of the channel NA1→B1, resulting in the following state:

Bob processes his systems B1B′1 with the decoding channel D1B1B′1→F1B′2 and Alice acts with the encoding channel E2A′1F1→A′2A2, resulting in the state

for i∈{2,…,n−1}. The final decoding (measurement) channel DnBnB′n→^W results in the following state:

Figure 1 depicts the above protocol for n=3.

For an (n,M,H,E,ε) protocol, the following is satisfied

^W denotes the random variable corresponding to the classical value in the register ^W of the state ρW^W. Furthermore, the following energy constraint applies as well:

which limits the energy of the average input state.

Our goal is to bound the rate of such a protocol. With this in mind, we can devise a protocol that simulates the above one. It consists of purifying each step of the above protocol and Bob keeping a copy of the classical feedback, such that at each time step, conditioned on the value of the message in W and the feedback in the existing systems labeled by F, the state is pure. To be clear, we go through the steps of the purified protocol. In order to simplify notation, we let ^A be a joint system throughout, referring to both the original A′ system as well as a purifying system, and we take the same convention for ^B. The initial state of Alice is as follows:

where ψm^A0 is a purification of ρmA′0, such that tracing over a subsystem of ψm^A0 gives ρmA′0. The initial state of Bob is as follows:

where φf0^B1 is a purification of σf0B′1, such that tracing over a subsystem of φf0^B1 gives σf0B′1, and he keeps an extra copy F′0 of the classical data. Let Ui^Ai−1Fi−1→^AiAi denote an isometric channel extending the encoding channel EiA′i−1Fi−1→A′iAi, for i∈{1,…,n}. Since the system Fi is classical, for i∈{1,…,n−1}, the decoding channel DiBiB′i→FiB′i+1 can be written explicitly as

Note that this enlarged decoding channel keeps an extra copy of the classical feedback value for Bob in the register F′i. The final decoding channel in the original protocol is equivalent to a measurement channel, and thus can be written as

where {ΛwBnB′n}w is a POVM. We enlarge it as follows in the simulation protocol:

where the meaning of the notation is that the map √ΛwBnB′n(⋅)√ΛwBnB′n acts nontrivially on the subsystems BnB′n in the original protocol and trivially on all other B subsystems, while mapping all B systems to a system ^Bn+1 large enough to accommodate all of them. In the simulation protocol, we also consider an isometric channel UNA→BE that simulates the original channel NA→B as follows: NA→B=TrE∘UNA→BE.

Thus, the various states involved in the purified protocol are as follows. The global initial state is ρW^A0⊗σF0F′0^B1. Alice performs the enlarged encoding channel U1^A0F0→^A1A1 and the state becomes as follows:

Alice transmits the A1 system through the first use of the extended channel UNA1→B1E1, resulting in the following state:

for i∈{2,…,n−1}. The final enlarged decoding channel VnBn^Bn→^Bn+1^W results in the following state: ρW^An^Bn+1^WEn1[Fn−10]′≡VnBn^Bn→^Bn+1^W(ρ(n)W^AnBn^BnEn1[Fn−10]′). Note that we recover each state of the original protocol from Section II by performing particular partial traces.

The key information measure that we use to analyze this protocol is as follows:

The first term in (18) represents the classical correlation between system W and systems CF, while the second term represents the average entanglement between the system C of the state τw,fC and a purifying reference system.

We now establish some properties of the information measure in (18). Let us first recall the following lemma from [19]:

The above lemma leads to the following one, which is the statement that the quantity in (18) is monotone with respect to 1W-LOCC channels:

Let τWFAB be a classical–quantum state, with classical systems WF and quantum systems AB pure when conditioned on WF, and let MAB→A′B′X be a 1W-LOCC channel of the form in (20). Then the following holds

Proof. The inequality I(W;BF)τ≥I(W;B′FX)θ holds from data processing. In more detail, consider that θWFB′X is equal to

where the last equality follows because each map UxA→A′ is trace preserving. So the state θWFB′X can be understood as arising from the action of the quantum instrument ∑xVxB→B′⊗|x⟩⟨x|X on the state τWFB, and since this is a channel from B to B′X, the data processing inequality applies so that I(W;BF)τ≥I(W;B′FX)θ. The inequality S(B|WF)τ≥S(B′|WFX)θ follows from an application of Lemma 1, by conditioning on the classical systems WF.

The following lemma places an entropic upper bound on the amount by which the quantity in (18) can increase by the action of a channel NA→B:

Let τWFAB′ be a classical–quantum state of the following form:

All inequalities follow from definitions and applying chain rules for mutual information and entropy. The final inequality follows because conditioning does not increase entropy.

Now that we have identified a quantity that does not increase under 1W-LOCC from Bob to Alice and cannot increase by more than the output entropy of a channel under its action, we can use these properties to establish the following upper bound on the rate of a feedback-assisted communication protocol:

For an (n,M,H,E,ε) protocol for classical communication over a quantum channel NA→B assisted by classical feedback, of the form described in Section II, the following bound applies

Proof. Let us consider the purified simulation of a given (n,M,H,E,ε) protocol, as given in Section III. We start with

where we have applied the condition in (9) and standard entropy inequalities. Continuing, we find that

The first inequality follows from data processing and non-negativity of entropy. The first equality follows because I(W;^B1F′0)ω(1)+S(^B0|F′0W)ω(1)=0 for the initial state ω(1)W^A1A1^B1F′0 (there is no classical correlation between W and ^B1F′0, and the state on system ^B0 is pure when conditioned on F′0W). The last equality follows by adding and subtracting the same term. Continuing, we find that the quantity in the last line above is bounded as

In Appendix A, we show how to extend this result to the maximum average output entropy:

is a probability distribution and

{NxA→B}x is a set of channels. For an (n,M,H,E,ε) protocol for classical communication over the channel NA→B assisted by classical feedback, of the form described in Section II, the following bound applies

From the upper bound in Theorem 4, we conclude that the feedback-assisted capacity of a noiseless qudit channel of dimension d is log2d.

Furthermore, consider a pure-loss bosonic channel [20] with transmissivity η∈[0,1]. Taking the Hamiltonian as the photon number operator and energy constraint NS≥0, it is known from [20] that this channel’s energy constrained classical capacity and maximum output entropy are equal to g(ηNS), where g(x)≡(x+1)log2(x+1)−xlog2x. Applying these results and Theorem 4, we conclude that classical feedback does not increase the energy-constrained classical capacity of the pure-loss bosonic channel.

Acknowledgements. We acknowledge discussions with Xin Wang, Patrick Hayden, and Tsachy Weissman. DD is supported by a National Defense Science and Engineering Graduate Fellowship. YQ is supported by a Stanford Graduate Fellowship and a National University of Singapore Overseas Graduate Scholarship. PWS is supported by the NSF under Grant No. CCF-1525130 and through the NSF Science and Technology Center for Science of Information under Grant No. CCF0-939370. MMW acknowledges NSF grant no. 1350397. DD would like to thank God for all His provisions.