This paper presents the Entity-Duet Neural Ranking Model (EDRM), which introduces knowledge graphs to neural search systems. EDRM represents queries and documents by their words and entity annotations. The semantics from knowledge graphs are integrated in the distributed representations of their entities, while the ranking is conducted by interaction-based neural ranking networks. The two components are learned end-to-end, making EDRM a natural combination of entity-oriented search and neural information retrieval. Our experiments on a commercial search log demonstrate the effectiveness of EDRM. Our analyses reveal that knowledge graph semantics significantly improve the generalization ability of neural ranking models. 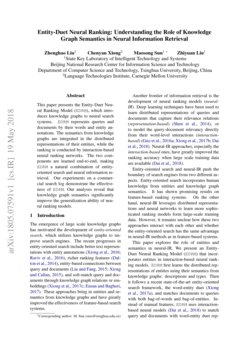 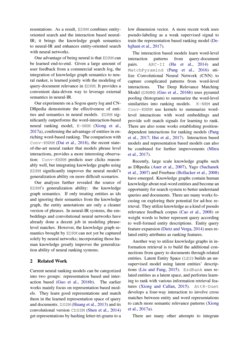 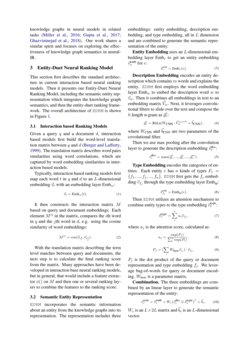 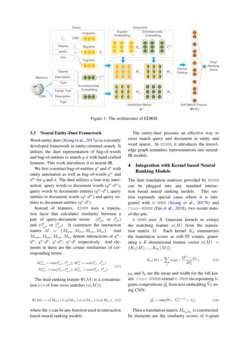 In this research, we improve upon the current state of the art in entity...
Emma J. Gerritse, et al. ∙

). Deep learning techniques have been used to learn distributed representations of queries and documents that capture their relevance relations (

This paper explores the role of entities and semantics in neural-IR. We present an Entity-Duet Neural Ranking Model (EDRM) that incorporates entities in interaction-based neural ranking models. EDRM first learns the distributed representations of entities using their semantics from knowledge graphs: descriptions and types. Then it follows a recent state-of-the-art entity-oriented search framework, the word-entity duet Xiong et al. (2017a), and matches documents to queries with both bag-of-words and bag-of-entities. Instead of manual features, EDRM uses interaction-based neural models Dai et al. (2018) to match query and documents with word-entity duet representations. As a result, EDRM combines entity-oriented search and the interaction based neural-IR; it brings the knowledge graph semantics to neural-IR and enhances entity-oriented search with neural networks.

One advantage of being neural is that EDRM can be learned end-to-end. Given a large amount of user feedback from a commercial search log, the integration of knowledge graph semantics to neural ranker, is learned jointly with the modeling of query-document relevance in EDRM. It provides a convenient data-driven way to leverage external semantics in neural-IR.

Our analyses further revealed the source of EDRM

EDRM can not yet be captured solely by neural networks; incorporating those human knowledge greatly improves the generalization ability of neural ranking systems.

get representations by hashing letter-tri-grams to a low dimension vector. A more recent work uses pseudo-labeling as a weak supervised signal to train the representation based ranking model

There are many other attempts to integrate knowledge graphs in neural models in related tasks Miller et al. (2016); Gupta et al. (2017); Ghazvininejad et al. (2018). Our work shares a similar spirit and focuses on exploring the effectiveness of knowledge graph semantics in neural-IR.

This section first describes the standard architecture in current interaction based neural ranking models. Then it presents our Entity-Duet Neural Ranking Model, including the semantic entity representation which integrates the knowledge graph semantics, and then the entity-duet ranking framework. The overall architecture of EDRM is shown in Figure 1.

Typically, interaction based ranking models first map each word t in q and d to an L-dimensional embedding →vt with an embedding layer Embw:

It then constructs the interaction matrix M based on query and document embeddings. Each element Mij in the matrix, compares the ith word in q and the jth word in d

With the translation matrix describing the term level matches between query and documents, the next step is to calculate the final ranking score from the matrix. Many approaches have been developed in interaction base neural ranking models, but in general, that would include a feature extractor ϕ() on M and then one or several ranking layers to combine the features to the ranking score.

Entity Embedding uses an L-dimensional embedding layer Embe to get an entity embedding →vembe for e:

Description Embedding encodes an entity description which contains m words and explains the entity. EDRM first employs the word embedding layer Embw to embed the description word w to →vw. Then it combines all embeddings in text to an embedding matrix →Vw. Next, it leverages convolutional filters to slide over the text and compose the h

where WCNN and →bCNN are two parameters of the covolutional filter.

Type Embedding encodes the categories of entities. Each entity e has n kinds of types Fe={f1,...,fj,...,fn}. EDRM first gets the fj embedding →vfj through the type embedding layer Embtp:

Then EDRM utilizes an attention mechanism to combine entity types to the type embedding →vtypee:

where aj is the attention score, calculated as:

Combination. The three embeddings are combined by an linear layer to generate the semantic representation of the entity:

We is an L×2L matrix and →be is an L-dimensional vector.

Word-entity duet Xiong et al. (2017a) is a recently developed framework in entity-oriented search. It utilizes the duet representation of bag-of-words and bag-of-entities to match q-d with hand crafted features. This work introduces it to neural-IR.

Instead of features, EDRM uses a translation layer that calculates similarity between a pair of query-document terms: (→viwq or →vieq) and (→vjwd or →vjed). It constructs the interaction matrix M={Mww,Mwe,Mew,Mee}. And Mww,Mwe,Mew,Mee denote interactions of qw-dw, qw-de, qe-dw, qe-de respectively. And elements in them are the cosine similarities of corresponding terms:

The final ranking feature Φ(M) is a concatenation (⊕) of four cross matches (ϕ(M)):

where the ϕ can be any function used in interaction based neural ranking models.

The entity-duet presents an effective way to cross match query and document in entity and word spaces. In EDRM, it introduces the knowledge graph semantics representations into neural-IR models.

The duet translation matrices provided by EDRM can be plugged into any standard interaction based neural ranking models. This section expounds special cases where it is integrated with K-NRM Xiong et al. (2017b) and Conv-KNRM Dai et al. (2018), two recent state-of-the-arts.

Then a translation matrix Mhq,hd is constructed. Its elements are the similarity scores of h-gram pairs between query and document:

We then use learning to rank to combine ranking feature Φ(M) to produce the final ranking score:

ωr and br are the ranking parameters. tanh

We use standard pairwise loss to train the model:

where the d+ is a document ranks higher than d−.

With sufficient training data, the whole model is optimized end-to-end with back-propagation. During the process, the integration of the knowledge graph semantics, entity embedding, description embeddings, type embeddings, and matching with entities-are learned jointly with the ranking neural network.

This section describes the dataset, evaluation metrics, knowledge graph, baselines, and implementation details of our experiments.

Dataset. Our experiments use a query log from Sogou.com, a major Chinese searching engine Luo et al. (2017). The exact same dataset and training-testing splits in the previous research Xiong et al. (2017b); Dai et al. (2018) are used. They defined the ad-hoc ranking task in this dataset as re-ranking the candidate documents provided by the search engine. All Chinese texts are segmented by ICTCLAS Zhang et al. (2003), after that they are treated the same as English.

Testing-SAME uses DCTR labels, the same as in training. Testing-DIFF evaluates models performance based on TACM inferred relevance labels. Testing-RAW evaluates ranking models through user clicks, which tests ranking performance for the most satisfying document. Testing-DIFF and Testing-RAW are harder scenarios that challenge the generalization ability of all models, because their training labels and testing labels are generated differently Xiong et al. (2017b).

Evaluation Metrics. NDCG@1 and NDCG@10 are used in Testing-SAME and Testing-DIFF. MRR is used for Testing-Raw. Statistic significances are tested by permutation test with P<0.05. All are the same as in previous research Xiong et al. (2017b).

Knowledge Graph. We use CN-DBpedia Xu et al. (2017), a large scale Chinese knowledge graph based on Baidu Baike, Hudong Baike, and Chinese Wikipedia. CN-DBpedia contains 10,341,196 entities and 88,454,264 relations. The query and document entities are annotated by CMNS, the commonness (popularity) based entity linker Hasibi et al. (2017). CN-DBpedia and CMNS provide good coverage on our queries and documents. As shown in Figure 2, the majority of queries have at least one entity annotation; the average number of entity annotated per document title is about four.

Neural baselines include CDSSM Shen et al. (2014), MatchPyramid (MP) Pang et al. (2016), DRMM Grauman and Darrell (2005), K-NRM Xiong et al. (2017b) and Conv-KNRM Dai et al. (2018). CDSSM is representation based. It uses CNN to build query and document representations on word letter-tri-grams (or Chinese characters). MP and DRMM are both interaction based models. They use CNNs or histogram pooling to extract features from embedding based translation matrix.

All models are implemented with PyTorch. Adam is utilized to optimize all parameters with learning rate

and early stopping with the practice of 5 epochs.

Four experiments are conducted to study the effectiveness of EDRM: the overall performance, the contributions of matching kernels, the ablation study, and the influence of entities in different scenarios. We also do case studies to show effect of EDRM on document ranking.

The ranking accuracies of the ranking methods are shown in Table 1. K-NRM and Conv-KNRM outperform other baselines in all testing scenarios by large margins as shown in previous research.

EDRM-KNRM out performs K-NRM by over 10% improvement in Testing-SAME and Testing-DIFF. EDRM-CKNRM has almost same performance on Testing-SAME with Conv-KNRM. A possible reason is that, entity annotations provide effective phrase matches, but Conv-KNRM is also able to learn phrases matches automatically from data. However, EDRM-CKNRM has significant improvement on Testing-DIFF and Testing-RAW. Those demonstrate that EDRM has strong ability to overcome domain differences from different labels.

This experiment studies the contribution of knowledge graph semantics by investigating the weights learned on the different types of matching kernels.

. The weight of unigram, bigram, trigram, and entity is almost uniformly distributed, indicating the effectiveness of entities and all components are important in

This experiment studies which part of the knowledge graph semantics leads to the effectiveness and generalization ability of EDRM.

These two experiments reveal that the effectiveness of EDRM is more observed on harder or shorter queries, whereas the word-based neural models either find it difficult or do not have sufficient information to leverage.

First, the entity descriptions explain the meaning of entities and connect them through the word space. Meituxiuxiu web version and Meilishuo are two websites providing image processing and shopping services respectively. Their descriptions provide extra ranking signals to promote the related documents.

Second, entity types establish underlying relevance patterns between query and documents. The underlying patterns can be captured by cross-space matches. For example, the types of the query entity Crayon Shin-chan and GINTAMA overlaps with the bag-of-words in the relevant documents. They can also be captured by the entity-based matches through their type overlaps, for example, between the query entity Master Lu and the document entity System Optimization.

Our experiments on the Sogou search log and CN-DBpedia demonstrate EDRM’s effectiveness and generalization ability over two state-of-the-art neural ranking models. Our further analyses reveal that the generalization ability comes from the integration of knowledge graph semantics. The neural ranking models can effectively model n-gram matches between query and document, which overlaps with part of the ranking signals from entity-based matches: Solely adding the entity names may not improve the ranking accuracy much. However, the knowledge graph semantics, introduced by the description and type embeddings, provide novel ranking signals that greatly improve the generalization ability of neural rankers in difficult scenarios.

This paper preliminarily explores the role of structured semantics in deep learning models. Though mainly fouced on search, we hope our findings shed some lights on a potential path towards more intelligent neural systems and will motivate more explorations in this direction.