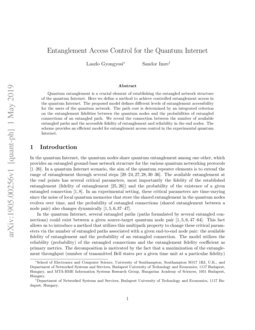 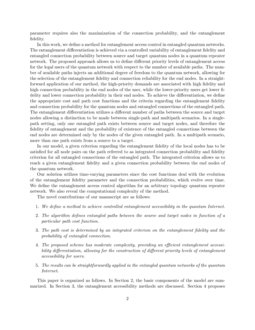 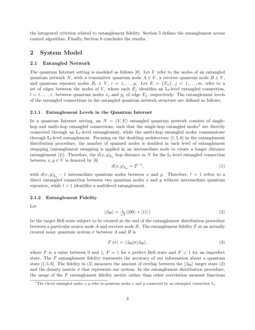 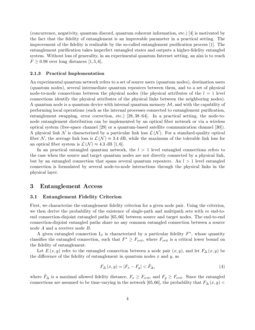 Crucial problems of the quantum Internet are the derivation of stability...
Laszlo Gyongyosi, et al. ∙

Our solution utilizes time-varying parameters since the cost functions deal with the evolution of the entanglement fidelity parameter and the connection probabilities, which evolve over time. We define the entanglement access control algorithm for an arbitrary topology quantum repeater network. We also reveal the computational complexity of the method.

The novel contributions of our manuscript are as follows:

2.1.1 Entanglement Levels in the Quantum Internet

be the target Bell state subject to be created at the end of the entanglement distribution procedure between a particular source node A and receiver node B. The entanglement fidelity F at an actually created noisy quantum system σ between A and B is

where F is a value between 0 and 1, F=1 for a perfect Bell state and F<1 for an imperfect state. The F entanglement fidelity represents the accuracy of our information about a quantum state [1, 5, 6]. The fidelity in (3) measures the amount of overlap between the |β00⟩ target state (2) and the density matrix σ that represents our system. In the entanglement distribution procedure, the usage of the F entanglement fidelity metric rather than other correlation measure functions (concurrence, negativity, quantum discord, quantum coherent information, etc.) [4] is motivated by the fact that the fidelity of entanglement is an improvable parameter in a practical setting. The improvement of the fidelity is realizable by the so-called entanglement purification process [1]. The entanglement purification takes imperfect entangled states and outputs a higher-fidelity entangled system. Without loss of generality, in an experimental quantum Internet setting, an aim is to reach F≥0.98 over long distances [1, 5, 6].

An experimental quantum network refers to a set of source users (quantum nodes), destination users (quantum nodes), several intermediate quantum repeaters between them, and to a set of physical node-to-node connections between the physical nodes (the physical attributes of the l=1 level connections identify the physical attributes of the physical links between the neighboring nodes). A quantum node is a quantum device with internal quantum memory M, and with the capability of performing local operations (such as the internal processes connected to entanglement purification, entanglement swapping, error correction, etc.)[28, 38, 39, 40, 41, 42, 43, 44, 45, 46, 47, 48, 49, 50, 51, 52, 53, 54, 55, 56, 57, 58, 59, 60, 61, 62, 63, 64]. In a practical setting, the node-to-node entanglement distribution can be implemented by an optical fiber network or via a wireless optical system (free-space channel [29] or a quantum-based satellite communication channel [30]). A physical link N is characterized by a particular link loss L(N). For a standard-quality optical fiber N, the average link loss is L(N)≈3.4 dB, while the maximum of the tolerable link loss for an optical fiber system is L(N)≈4.3 dB [1, 6].

, whose quantity classifies the entangled connection, such that

F∗≥Fcrit, where Fcrit is a critical lower bound on the fidelity of entanglement.

Let E(x,y) refer to the entangled connection between a node pair (x,y), and let FΔ(x,y) be the difference of the fidelity of entanglement in quantum nodes x and y, as

where ^FΔ is a maximal allowed fidelity distance, Fx≥Fcrit, and Fy≥Fcrit. Since the entangled connections are assumed to be time-varying in the network [65, 66], the probability that FΔ(x,y)<^FΔ holds at a given time t for an entangled connection ELl(x,y) is as

is the probability density function of entanglement fidelity distance.

Let PS refer to a single path between Aρ,Uk and Bρ,Uk, k=1,…,K, where ρ is a demand, Aρ,Uk and Bρ,Uk are the sender and destination nodes associated with the demand ρ of user Uk, K is the number of users. The single entangled path setting means that entanglement can be distributed from Aρ,Uk to Bρ,Uk through only one given path in the network N. Let it be assumed that PS consists of g entangled connections; then the Pr(PS) probability that a given single path PS exists between Aρ,Uk and Bρ,Ukwith the fidelity criterion is expressed as

Let PMi, i=1,…,m, refer to the ith multipath between Aρ,Uk and Bρ,Uk, which means that entanglement can be distributed from Aρ,Uk to Bρ,Uk through a set PM of m end-to-end connection-disjoint entangled paths as PM={PM1,…,PMm} in the network N. The Pr(PM) probability [65] that Aρ,Uk and Bρ,Uk share a common entanglement with the fidelity criterion is as

where S is a path index, and gS is the number of entangled connections associated with PS.

Based on the distribution of FΔ(x,y) fidelity distances between the node pairs of the network, the formulas of (6) and (7) can be derived in a more exact form222

Assuming an exponential distribution of

In our model, the fidelity of shared entanglement evolves in time for a given node pair (x,y). For each quantum node i at a time t, let Ψi(t) be defined as

For a node pair (x,y), according to local quantities, the following distance can be defined:

where Pr(ELl(x,y,t)), and Pr(ELl(y,x,t)) are the connection probability quantities determined in nodes x and y, and the fidelity distance FΔ(t) is described by

where Fx(t), and Fy(t) are the fidelity quantities determined in nodes x and y.

Since the connection probability and the entanglement fidelity parameters evolve over time, after Δt from an initial time t0, the quantity Ψx(t0+Δt) of a given node x evolves as

where χx(t0,Δt) is expressed as

where δ(γx,y) is the probability density function of distance function γx,y, and ϕPr(ELl(x,y))x and ϕFxx are expressed as the connection probability and entanglement fidelity evolution functions of node x.

For a given node pair (x,y), the particular upper bound γmaxx,y on the maximal allowable distance between Ψx(t0+Δt) and Ψy(t0+Δt) at time t0+Δt leads to a limit while (x,y) can be referred to as entangled:

If γx,y(t0+Δt) exceeds γmaxx,y, then the difference of the local entangled connection probabilities and entanglement fidelities are above a critical limit; therefore, the node pair (x,y) is referred to as unentangled.

A representation of FΔ(t0) and FΔ(t0+Δt) for a node pair (x,y) is depicted in Fig. 1. The Pr(ELl(x,y)) connection probability is assumed to be different in the nodes at a particular time.

For the algorithm, a c(ELl(x,y)) cost function [65] of a given entangled connection ELl(x,y) is defined as

Let N be the actual quantum repeater network with |V| quantum nodes. A given Ll-level entangled connection between a node pair (x,y) is expressed as ELl(x,y).

Let Aρ,Uk and Bρ,Uk be the source and target quantum nodes of a demand ρ associated with user Uk. Using (20) and a given entangled path P with a set of q quantum repeaters Ri, i=1,…,q, and a set S entangled connections, as

the cost of path P is defined as

The DA entanglement access control algorithm outputs a set of PM={PM1,…,PMm}, which contains the m connection-disjoint entangled paths between Aρ,Uk and Bρ,Uk.

In function of m, UC priority classes can be defined for the users of the quantum Internet. A high priority user gets a high value of m, while lower priority users get lower values of m. The actual value of m for a particular user class UC can be determined in function of the current network conditions.

The steps are given in Algorithm 1.

A brief description of the DA entanglement access control algorithm is as follows.

Step 1 sets m for a user Uk by the UC(Uk) priority class of the user. The UC(Uk) determines the available value(s) of m for Uk.

In Step 2, entanglement is established between the source node Aρ,Uk of the given demand of the user and the neighboring quantum repeaters. The relevant metrics quantities are also calculated in this step.

Using the derived quantities of Step 2, in Step 3, the cost paths are derived via (26) using the entangled connection cost formula of (20).

Step 6 outputs the set of m end-to-end connection-disjoint entangled paths between Aρ,Uk and Bρ,Uk and the path costs for all paths.

Step 7 determines the Pr(PM) probability for user Uk via (19), and updates the actual value of m if needed.

Finally, Step 8 extends the steps for all users.

In Fig. 2 a multipath entanglement accessibility is depicted in a quantum Internet setting with heterogeneous entanglement levels. The network situation depicts connection-disjoint entangled paths that share no common entangled connection between a source node Aδ,Ui and a receiver node Bδ,Ui. The entangled paths are characterized by the derived formulas.

For a given quantum network N with |V| quantum nodes, the computational complexity of the DA entanglement access control algorithm for a given demand ρ is at most O(|V|), since the problem is analogous to the establishment of a path by message broadcasting [65].

We provide a numerical evidence on the distribution of the PS and PM path probabilities.

Let us set Fcrit=0.98 for the lower bound on the fidelity of entanglement between all node pairs x and y, Fx≥Fcrit, and Fy≥Fcrit. Then, the maximal allowed fidelity distance is set as ^FΔ=1−0.98=0.02.

The numerical analysis revealed that Pr(PS)≈0.4171 for a PS single entangled path at the particular Pr(FΔ(x,y)<^FΔ) connection-level values of the path (given in Fig. 3(a)). The PM multipath setting at connection-level values of Fig. 3(b), at m=4 doubles the success probability of the single path setting with Pr(PM)≈0.8549, while at m=5, the resulting probability is Pr(PM)≈0.9476.

In this work, we defined a method to achieve entanglement access control in the quantum Internet. The algorithm utilizes different paths between the source and target nodes in function of a particular path cost function. The path cost function uses the local entanglement fidelities of the nodes and the probability of the existence of the entangled connections. Increasing the number of available paths leads to a multipath setting, which allows the parties to establish high fidelity entanglement with reliable entangled connections between the end nodes. The proposed scheme has moderate complexity, and it is particularly convenient for the entangled quantum network structure of the quantum Internet.

This work was partially supported by the National Research Development and Innovation Office of Hungary (Project No. 2017-1.2.1-NKP-2017-00001), by the Hungarian Scientific Research Fund - OTKA K-112125 and in part by the BME Artificial Intelligence FIKP grant of EMMI (BME FIKP-MI/SC).