In this work, we propose an ensemble forecasting approach based on randomized neural networks. Improved randomized learning streamlines the fitting abilities of individual learners by generating network parameters in accordance with the data and target function features. A pattern-based representation of time series makes the proposed approach suitable for forecasting time series with multiple seasonality. We propose six strategies for controlling the diversity of ensemble members. Case studies conducted on four real-world forecasting problems verified the effectiveness and superior performance of the proposed ensemble forecasting approach. It outperformed statistical models as well as state-of-the-art machine learning models in terms of forecasting accuracy. The proposed approach has several advantages: fast and easy training, simple architecture, ease of implementation, high accuracy and the ability to deal with nonstationarity and multiple seasonality in time series. 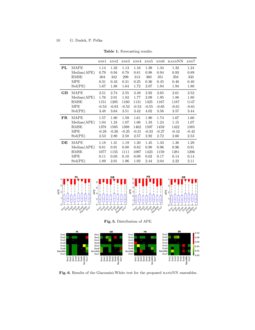 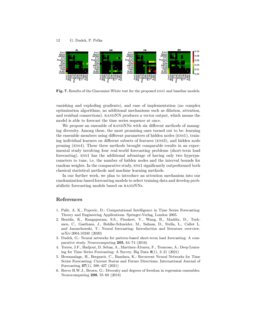 In this paper we study the generalisation capabilities of fully-connecte...
Anastasia Borovykh, et al. ∙

Time series (TS) forecasting plays an important role in many fields, including commerce, industry, public administration, politics, health, medicine, etc. [1]. TS expressing different phenomena and processes may include the nonlinear trend, multiple seasonal cycles of different lengths and random fluctuations. This makes the relationship between predictors and output variables very complex and places high demands on forecasting models. Over the years, many sophisticated forecasting models have been proposed including statistical, machine learning (ML) and hybrid solutions.

Among ML models, neural networks (NNs) are the most commonly used. There are a huge number of forecasting models based on different NN architectures [2]

, many models based on deep learning (DL) have been developed recently. These are composed of combinations of basic structures, such as MLPs, convolutional NNs, and recurrent NNs (RNNs)

[4], [5]. Their success can be largely attributed to increased model complexity and the ability to perform representation learning and cross-learning.

An effective way to increase the performance of a predictive model is ensembling. Ensemble methods combine in some fashion multiple learning algorithms to produce a common response, hopefully improving accuracy and stability compared to a single learner. The challenge in ensemble learning, which to a large extent determines its success, is achieving a good tradeoff between the performance and the diversity of the ensemble members [6]

. The more accurate and the more diverse the individual learners are, the better the ensemble performance. Depending on the base model type, the diversity of learners can be achieved using different strategies. For example, the winning submission to the M4 Makridakis forecasting competition, was a hybrid model combining exponential smoothing (ETS) and long-short term memory

[7], which uses three sources of diversity. The first is a stochastic training process, the second is similar to bagging, and the third is training ensemble members using different initial parameters. In another state-of-the-art DL forecasting model, N-Beats [8], in order to achieve diversity, each of the ensemble members is trained using a different random initialization and a different random sequence of batches.

Randomization-based NNs are especially suitable for ensembling as they are highly unstable and extremely fast trained [9]. In randomized NNs, the hidden node parameters are selected randomly and the output weights are tuned using a simple and fast least-squares method. This avoids the difficulties associated with gradient-based learning such as slow convergence, local minima problems, and model uncertainties caused by the initial parameters. Ensemble methods based on randomized NNs were presented recently in several papers. In [10]

, an ensemble based on decorrelated random vector functional link (RVFL) networks was proposed using negative correlation learning to control the trade-off among the bias, variance and covariance in the ensemble learning. A selective ensemble of randomization-based NNs using successive projections algorithm (SPA) was put forward in

[11]. SPA improves diversity by selecting uncorrelated members. In [12], to enhance the generalization capacities of the ensemble, a novel framework for building an ensemble model by selecting appropriate representatives from a number of randomization-base models (RVFL or stochastic configuration networks) was proposed.

In the forecasting domain, ensembles of randomization-based NNs are widely used. Examples include: [13], where ensemble members, which are extreme learning machines, learn on TS decomposed by wavelet transform; [14], where a hybrid incremental learning approach is presented for ensemble forecasting, which is composed of discrete wavelet transform, empirical mode decomposition and RVFL networks as base learners; [15], where a new bagging ensemble approach based on NN with random weights for online data stream regression is proposed; [16], where a data-driven evolutionary ensemble forecasting model is proposed using two optimization objectives (error and diversity) and RVFL as a base learner.

Motivated by the good performance of the randomized NN based ensemble forecasting models mentioned above, and new improvements in randomized learning [17] as well as pattern-based TS representation suitable for TS with multiple seasonality [3], this work contributes to the development of forecasting models in the following ways:

The remaining sections of this work are organized as follows. Section 2 presents the base forecasting model, \textscrandNN. Section 3 describes strategies for generating ensemble diversity. The performance of the proposed ensemble forecasting model is evaluated in Section 4. Concluding remarks are given in Section 5.

Fig. 1 shows \textscrandNN, a base forecasting model, which was designed for forecasting TS with multiple seasonality [18]. It is used as an ensemble member. \textscrandNN is composed of an encoder, a decoder and a randomized feedforward NN (FNN).

Note that the x-patterns are normalized versions of centered vectors ei. All x-patterns, representing successive seasonal sequences, have a zero mean, the same variance and the same unity length. However, they differ in shape. Thus, the original seasonal sequences, which have a different mean value and dispersion, are unified (see Fig. 2 in [18]).

The output patterns yi=[yi,1,yi,2,…,yi,n]T represent the forecasted sequences ei+τ=[Ei+τ,1,Ei+τ,2,…,Ei+τ,n]T, where τ≥1 is a forecast horizon. The y-patterns are determined as follows:

The randomized FNN is composed of n inputs, one hidden layer with m nonlinear nodes, and n

outputs. Logistic sigmoid activation functions are employed for hidden nodes. The training set is composed of the corresponding input and output patterns:

In the first step, the weights are selected randomly from symmetrical interval [−u,u]. The interval bounds, u, decide about the steepness of the sigmoids. To make the bounds interpretable, let us express them by the sigmoid slope angle [17]: u=4tanαmax, where αmax

is the upper bound for slope angles. Hyperparameter

αmax as well as number of hidden nodes m control the bias-variance tradeoff of the model. Both these hyperparameters should be adjusted to the target function complexity.

The biases calculated according to (4) ensure the introduction of the steepest fragments of the sigmoid into the input hypercube [17]. These fragments are most useful for modeling target function fluctuations. Thus, there are no saturated sigmoids and wasted nodes in the network.

An ensemble is composed of M individual learners (\textscrandNNs). Each ensemble member learns from the training set Φ using one of the strategies for generating diversity, \textscens1−\textscens6 described below. The ensemble prediction is an average of individual member predictions ˆek:

As an ensemble diversity measure, we define the average standard deviation of forecasts produced by the individual learners:

where Ψ is a test set, ˆEki,t is a forecast of the t-th element of the i-th seasonal sequence produced by the k-th learner, and ¯¯¯¯ˆEi,t is an average of forecasts produced by M learners.

An ensemble diversity is generated using one of the following six strategies:

We evaluate the performance of the proposed ensembles of \textscrandNNs on four real-world forecasting problems. These concern forecasting electricity demand for four European countries: Poland (PL), Great Britain (GB), France (FR) and Germany (DE) (data was collected from www.entsoe.eu). The hourly electrical load TS express three seasonalities: yearly, weekly and daily (see Fig. 2 in [18]). The data period covers the 4 years from 2012 to 2015. Atypical days such as public holidays were excluded from the data (between 10 and 20 days a year). The forecast horizon τ is one day, i.e. 24 hours. We forecast the daily load profile for each day of 2015. For each forecasted day, a new training set is created which includes historical pairs of corresponding input and output patterns representing the same days of the week as the pair in the query pattern and forecasted pattern. The number of ensemble members was M=100.

In the first experiment, to assess the impact of the \textscrandNNs hyperparameters on the forecasting accuracy of \textscens1, we train the \textscrandNN members with m=10,20,...,70 and αmax=0∘,10∘,...,90∘. Fig. 2 shows the mean absolute percentage errors (MAPE) depending on the hyperparameters. The optimal values of m/αmax were: 50/70∘ for PL, 30/60∘ for GB, 40/70∘ for FR, and 40/80∘ for DE. Based on these results, we select m=40 and αmax=70∘ for each ensemble variant and dataset, except \textscens1, where we control diversity by changing αmax, and \textscens4, where we control diversity by changing the number of pruning nodes. In this latter case we use m=80 nodes.

From Fig. 3, we can assess the impact of the hyperparameters on the diversity (7) of \textscens1. As expected, greater numbers of hidden nodes and steeper sigmoids (higher αmax) cause an increase in diversity.

Fig. 4 shows MAPE and ensemble diversity depending on the diversity parameters for all ensemble variants and datasets. From this figure, we can conclude that:

Table 1 shows the quality metrics of the forecasts for the optimal values of the diversity parameters: MAPE, median of APE, root mean square error (RMSE), mean percentage error (MPE), and standard deviation of percentage error (Std(PE)) as a measure of the forecast dispersion. For comparison, the results for a single \textscrandNN are shown. In this case, for each forecasting task (each day of 2015) the hyperparameters of \textscrandNN, m and u, were optimized using grid search and 5-fold cross-validation [18]. The results for single \textscrandNN shown in Table 1 are averaged over 100 independent training sessions. \textscens7 shown in Table 1 is an ensemble of these 100 runs (calculated from (6)). \textscens7 is similar to \textscens1. The only difference is that for \textscens7 the \textscrandNN hyperparameters were optimized for each forecasting task, and for \textscens1 we set m=40 and αmax=70∘ for all forecasting tasks. Distributions of APE are shown in Fig. 5.

MPE shown in Table 1 allows us to assess the bias of the forecasts. A positive value of MPE indicates underprediction, while a negative value indicates overprediction. As can be seen from Table 1, for PL and DE all the models underpredicted, whilst for GB and FR they overpredicted. The forecasts produced by the three best ensemble models were less biased than the forecast produced by a single \textscrandNN and \textscens7.

In the next experiment, we compare \textscens1 performance (one of the best ensemble solutions) with that of other models based on classical statistical methods and ML methods. The baseline models that we use in our comparative studies are outlined below (see [22] for details). Their hyperparameters were selected on the training set in grid search procedures.

Challenging forecasting problems, such as forecasting nonstationary TS with multiple seasonality, need sophisticated models. In this work, to deal with multiple seasonal periods, we employ a pattern representation of the TS, in order to simplify the relationship between input and output data and make the problem easier to solve using simple regression models such as randomized NNs. \textscrandNNs

have three distinct advantages: a simple single-hidden layer architecture, extremely fast learning (no gradient-based learning, no problems with vanishing and exploding gradients), and ease of implementation (no complex optimization algorithms, no additional mechanisms such as dilation, attention, and residual connections).

\textscrandNN produces a vector output, which means the model is able to forecast the time series sequence at once.

We propose an ensemble of \textscrandNNs with six different methods of managing diversity. Among these, the most promising ones turned out to be: learning the ensemble members using different parameters of hidden nodes (\textscens1), training individual learners on different subsets of features (\textscens3), and hidden node pruning (\textscens4). These three methods brought comparable results in an experimental study involving four real-world forecasting problems (short-term load forecasting). \textscens1 has the additional advantage of having only two hyperparameters to tune, i.e. the number of hidden nodes and the interval bounds for random weights. In the comparative study, \textscens1 significantly outperformed both classical statistical methods and machine learning methods.