In this work, we aim at predicting children's fluid intelligence scores based on structural T1-weighted MR images from the largest long-term study of brain development and child health. The target variable was regressed on a data collection site, socio-demographic variables and brain volume, thus being independent to the potentially informative factors, which are not directly related to the brain functioning. We investigate both feature extraction and deep learning approaches as well as different deep CNN architectures and their ensembles. We propose an advanced architecture of VoxCNNs ensemble, which yield MSE (92.838) on blind test. 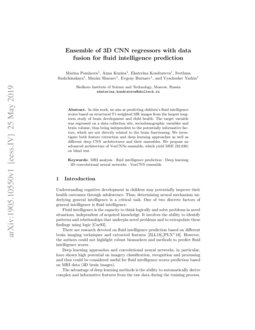 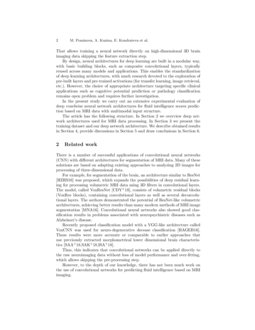 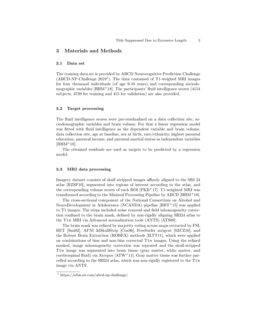 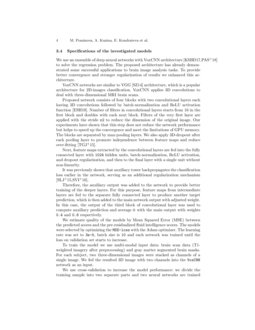 Association Between Intelligence and Cortical Thickness in Adolescents: Evidence from the ABCD Study

The relationship between the intelligence and brain morphology is warmly...
Qi Zhao, et al. ∙

Fluid intelligence is the capacity to think logically and solve problems in novel situations, independent of acquired knowledge. It involves the ability to identify patterns and relationships that underpin novel problems and to extrapolate these findings using logic [Car93].

There are research devoted on fluid intelligence prediction based on different brain imaging techniques and extracted features [ZLL18],[PLN+16]. However, the authors could not highlight robust biomarkers and methods to predict fluid intelligence scores .

The advantage of deep learning methods is the ability to automatically derive complex and informative features from the raw data during the training process. That allows training a neural network directly on high-dimensional 3D brain imaging data skipping the feature extraction step.

By design, neural architectures for deep learning are built in a modular way, with basic building blocks, such as composite convolutional layers, typically reused across many models and applications. This enables the standardization of deep learning architectures, with much research devoted to the exploration of pre-built layers and pre-trained activations (for transfer learning, image retrieval, etc.). However, the choice of appropriate architecture targeting specific clinical applications such as cognitive potential prediction or pathology classification remains open problem and requires further investigation.

In the present study we carry out an extensive experimental evaluation of deep voxelwise neural network architectures for fluid intelligence scores prediction based on MRI data with multimodal input structure.

There is a number of successful applications of convolutional neural networks (CNN) with different architectures for segmentation of MRI data. Many of these solutions are based on adapting existing approaches to analyzing 2D images for processing of three-dimensional data.

Thus, this indicates that convolutional networks can be applied directly to the raw neuroimaging data without loss of model performance and over-fitting, which allows skipping the pre-processing step.

However, to the depth of our knowledge, there has not been much work on the use of convolutional networks for predicting fluid intelligence based on MRI imaging.

The fluid intelligence scores were pre-residualized on a data collection site, sociodemographic variables and brain volume. For that a linear regression model was fitted with fluid intelligence as the dependent variable and brain volume, data collection site, age at baseline, sex at birth, race/ethnicity, highest parental education, parental income, and parental marital status as independent variables

The obtained residuals are used as targets to be predicted by a regression model.

Imagery dataset consists of skull stripped images affinely aligned to the SRI 24 atlas [RZSP10], segmented into regions of interest according to the atlas, and the corresponding volume scores of each ROI [PKB+17]. T1-weighted MRI was transformed according to the Minimal Processing Pipeline by ABCD [HHM+18].

The cross-sectional component of the National Consortium on Alcohol and NeuroDevelopment in Adolescence (NCANDA) pipeline [BBT+15] was applied to T1 images. The steps included noise removal and field inhomogeneity correction confined to the brain mask, defined by non-rigidly aligning SRI24 atlas to the T1w MRI via Advanced normalization tools (ANTS) [ATS09].

The brain mask was refined by majority voting across maps extracted by FSL BET [Smi02], AFNI 3dSkullStrip [Cox96], FreeSurfer mrigcut [SZCZ10], and the Robust Brain Extraction (ROBEX) methods [ILTT11], which were applied on combinations of bias and non-bias corrected T1w images. Using the refined masked, image inhomogeneity correction was repeated and the skull-stripped T1w image was segmented into brain tissue (gray matter, white matter, and cerebrospinal fluid) via Atropos [ATW+11]. Gray matter tissue was further parcelled according to the SRI24 atlas, which was non-rigidly registered to the T1w image via ANTS.

3.4 Specifications of the investigated models

We use an ensemble of deep neural networks with VoxCNN architecture [KSBD17, PAS+18] to solve the regression problem. The proposed architecture has already demonstrated some successful applications to brain image analysis tasks. To provide better convergence and stronger regularization of results we enhanced this architecture.

. Number of filters in convolutional layers starts from 16 in the first block and doubles with each next block. Filters of the very first layer are applied with the stride

to reduce the dimension of the original image. Our experiments have shown that this step does not reduce the network performance but helps to speed up the convergence and meet the limitations of GPU memory. The blocks are separated by max-pooling layers. We also apply 3D-dropout after each pooling layer to promote independence between feature maps and reduce over-fitting

Next, feature maps extracted by the convolutional layers are fed into the fully connected layer with 1024 hidden units, batch-normalization, ReLU activation, and dropout regularization, and then to the final layer with a single unit without non-linearity.

It was previously shown that auxiliary tower backpropagates the classification loss earlier in the network, serving as an additional regularization mechanism

Therefore, the auxiliary output was added to the network to provide better training of the deeper layers. For this purpose, feature maps from intermediate layers are fed to the separate fully connected layer to produce another target prediction, which is then added to the main network output with adjusted weight. In this case, the output of the third block of convolutional layer was used to compute auxiliary prediction and average it with the main output with weights 0.4 and 0.6 respectively.

We estimate quality of the models by Mean Squared Error (MSE) between the predicted scores and the pre-residualized fluid intelligence scores. The models were selected by optimizing the

MSE-loss with the Adam optimizer. The learning rate was set to 3e-5, batch size is 10 and each network was trained until the loss on validation set starts to increase.

To train the model we use multi-modal input data: brain scan data (T1-weighted imagery after preprocessing) and gray matter segmented brain masks. For each subject, two three-dimensional images were stacked as channels of a single image. We fed the resulted 3D image with two channels into the VoxCNN network as an input.

We use cross-validation to increase the model performance: we divide the training sample into two separate parts and two neural networks are trained with the same architecture on each part independently. Then for the validation subjects, an ensemble of these two models, defined as a weighted average of their predictions, is applied. Weights for averaging are determined based on the validation performance of each model (test predictions of the network that turned out to demonstrate lower MSE score on validation were set to larger weights). The number of layers, Stride and ReLU blocks position were adjusted correspondingly.

The models were implemented in PyTorch and trained on a single GPU [CPC16].

The most accurate prediction (in terms of MSE on the validation set) was obtained as a weighted average of the two predictions by VoxCNN neural networks trained on different parts of the training sample:

As a result, the first and the second network architectures showed 71.777 and 71.094 MSE scores on the Validation set. After averaging the predictions with adjusted weights 23 and 13, the final validation performance reached 70.635 MSE when using ensembles of models.

All constructed regression models provided MSE, which is equal approximately to 70. These results are comparable to the baseline result, calculated using morphological characteristics on the Validation set.

This incremental improvement and rather high errors across all models could potentially imply both the study design and the data inconsistency: the reason may be that structural T1-weighted images alone are not enough to predict fluid intelligence scores; at the same time brain functional data like fMRI might have more predictive power for cognitive assessment.

The top performing model was the combination (a weighted average prediction) of two VoxCNN neural networks trained on different parts of the training sample, highlighting the potential strength of the models’ ensembles yielded 70.635 MSE on the Validation set and 92.635 MSE on the Test set.

In our work for the first time ensembles of VoxCNN networks were applied to the 3D brain imagery regression task. According to the results of this architecture we could consider it as a consistent predictive tool for large datasets with heavy and multi-modal inputs.

Due to the rich structure of the considered dataset there is enough room for further improvements. A future work on the model hyperparameters optimization is needed in order to achieve better network convergence. We can use advanced approaches to initialization of neural network parameters

The considered problem was formulated in the scope of the Project “Machine Learning and Pattern Recognition for the development of diagnostic and clinical prognostic prediction tools in psychiatry, borderline mental disorders, and neurology” (a part of the Skoltech Biomedical Initiative program).

The work was supported by the Russian Science Foundation under Grant 19-41-04109.