This article discusses estimation of a multivariate normal mean based on heteroscedastic observations. Under heteroscedasticity, estimators shrinking more on the coordinates with larger variances, seem desirable. Although they are not necessarily minimax in the ordinary sense, we show that such James-Stein type estimators can be ensemble minimax, minimax with respect to the ensemble risk, related to empirical Bayes perspective of Efron and Morris. 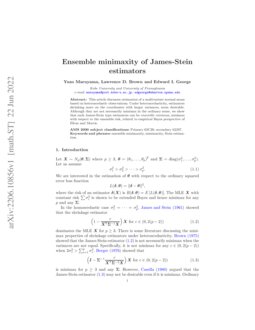 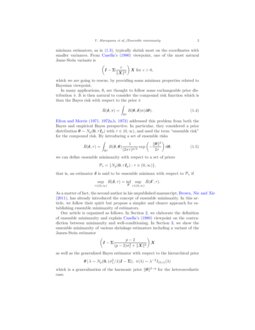 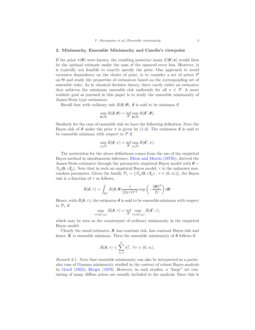 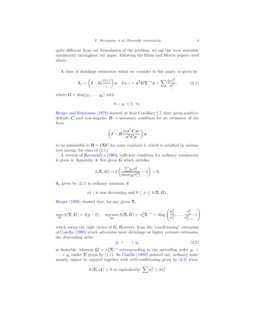 We study admissibility of a subclass of generalized Bayes estimators of ...
Yuzo Maruyama, et al. ∙

On estimation of nonsmooth functionals of sparse normal means

In this paper, we consider the estimation of a mean vector of a multivar...
Ryo Imai, et al. ∙

We study the computational aspects of the task of multivariate convex re...
Gil Kur, et al. ∙

We consider admissibility of generalized Bayes estimators of the mean of...
Yuzo Maruyama, et al. ∙

with respect to the ordinary squared error loss function

where the risk of an estimator δ(X) is R(δ,θ)=E[L(δ,θ)]. The MLE X with constant risk ∑σ2i is shown to be extended Bayes and hence minimax for any p and any Σ.

In the homoscedastic case σ21=⋯=σ2p, James and Stein (1961) showed that the shrinkage estimator

dominates the MLE X for p≥3. There is some literature discussing the minimax properties of shrinkage estimators under heteroscedasticity. Brown (1975) showed that the James-Stein estimator (1.3) is not necessarily minimax when the variances are not equal. Specifically, it is not minimax for any c∈(0,2(p−2)) when 2σ21>∑pi=1σ2i. Berger (1976) showed that

is minimax for p≥3 and any Σ. However, Casella (1980) argued that the James-Stein estimator (1.4) may not be desirable even if it is minimax. Ordinary minimax estimators, as in (1.4), typically shrink most on the coordinates with smaller variances. From Casella’s (1980) viewpoint, one of the most natural Jame-Stein variants is

which we are going to rescue, by providing some minimax properties related to Bayesian viewpoint.

In many applications, θi are thought to follow some exchangeable prior distribution π. It is then natural to consider the compound risk function which is then the Bayes risk with respect to the prior π

that is, an estimator δ is said to be ensemble minimax with respect to P⋆ if

As a matter of fact, the second author in his unpublished manuscript, Brown, Nie and Xie (2011), has already introduced the concept of ensemble minimaxity. In this article, we follow their spirit but propose a simpler and clearer approach for establishing ensemble minimaxity of estimators.

which is a generalization of the harmonic prior ∥θ∥2−p for the heteroscedastic case.

If the prior π(θ) were known, the resulting posterior mean E[θ|x] would then be the optimal estimate under the sum of the squared error loss. However, it is typically not feasible to exactly specify the prior. One approach to avoid excessive dependence on the choice of prior, is to consider a set of priors P on Θ and study the properties of estimators based on the corresponding set of ensemble risks. As in classical decision theory, there rarely exists an estimator that achieves the minimum ensemble risk uniformly for all π∈P. A more realistic goal as pursued in this paper is to study the ensemble minimaxity of James-Stein type estimators.

Recall that with ordinary risk R(δ,θ), δ is said to be minimax if

Similarly for the case of ensemble risk we have the following definition. Note the Bayes risk of δ under the prior π is given by (1.6). The estimator δ is said to be ensemble minimax with respect to P if

The motivation for the above definitions comes from the use of the empirical Bayes method in simultaneous inference.

Efron and Morris (1972b), derived the James-Stein estimator through the parametric empirical Bayes model with θ∼Np(0,τIp). Note that in such an empirical Bayes model, τ is the unknown non-random parameter. Given the family P⋆={Np(0,τIp):τ∈(0,∞)}, the Bayes risk is a function of τ as follows,

Hence, with ¯R(δ,τ), the estimator δ is said to be ensemble minimax with respect to P⋆ if

which may be seen as the counterpart of ordinary minimaxity in the empirical Bayes model.

Note that ensemble minimaxity can also be interpreted as a particular case of Gamma minimaxity studied in the context of robust Bayes analysis by Good (1952); Berger (1979). However, in such studies, a “large” set consisting of many diffuse priors are usually included in the analysis. Since this is quite different from our formulation of the problem, we use the term ensemble minimaxity throughout our paper, following the Efron and Morris papers cited above.

A class of shrinkage estimators which we consider in this paper, is given by

Berger and Srinivasan (1978) showed, in their Corollary 2.7, that, given positive-definite C and non-singular B, a necessary condition for an estimator of the form

to be admissible is B=kΣC for some constant k, which is satisfied by estimators among the class of (2.5).

A version of Baranchik’s (1964) sufficient condition for ordinary minimaxity is given in Appendix A; For given G which satisfies

δϕ given by (2.5) is ordinary minimax if

which seems the right choice of G. However, from the “conditioning” viewpoint of Casella (1980) which advocates more shrinkage on higher variance estimates, the descending order

is desirable, whereas G=σ2pΣ−1 corresponding to the ascending order g1<⋯<gp under Σ given by (1.1). As Casella (1980) pointed out, ordinary minimaxity cannot be enjoyed together with well-conditioning given by (2.7) when

and hence h(Σ,G)<0 follows. The motivation of Casella (1980, 1985) seems to provide a better treatment for the case. Actually Brown (1975) pointed out essentially the same phenomenon from a slightly different viewpoint.

Ensemble minimaxity, based on ensemble risk given by (1.7), provides a way of saving shrinkage estimators with well-conditioning, estimators which are not necessarily ordinary minimax.

We have the following theorem on ensemble minimaxity of δϕ with general G, though we will eventually focus on δϕ with G with the descending order g1>⋯>gp as in (2.7).

Assume ϕ(z) is non-negative, non-decreasing and concave. Also ϕ(z)/z is assumed non-increasing. Then

is ensemble minimax if

Then the posterior and marginal are given by

Since the first term of the r.h.s. of the above equality is rewritten as

and w and t are mutually independent. With the notation, we have

Since ϕ(w)/w is non-increasing and ϕ(w) is non-decreasing, by the correlation inequality, we have

Given Σ, the choice G=Σ/σ21 with descending order g1>⋯>gp, is one of the most natural choice of G from Casella’s (1980) viewpoint. In this case, we have

and hence a following corollary.

Assume that ϕ(z) is non-negative, non-decreasing and concave. Also ϕ(z)/z is assumed non-increasing. Then

is ensemble minimax if

As an example of Corollary 3.1, we consider

Note that ϕ(z) given by (3.8) is non-negative, increasing and concave and that ϕ(z)/z is decreasing. Then the sufficient condition in (3.7) is

Hence we have a following result.

Part 2 above follows from Theorem A.1.

is nonnegative for any x and any Σ, which is a nice property.

In this subsection, we provide a generalized Bayes ensemble minimax estimator. Following Strawderman (1971), Berger (1976) and Maruyama and Strawderman (2005), we consider the generalized harmonic prior

The prior π(θ)=∥θ∥2−p is called the harmonic prior and was originally investigated by Baranchik (1964) and Stein (1974). Berger (1980) and Berger and Strawderman (1996) recommended the use of the prior (3.11) mainly because it is on the boundary of admissibility.

By the way of Strawderman (1971), the generalized Bayes estimator with respect to the prior is given by

where ϕ∗(z) satisfies the following properties

Under the choice G=Σ/σ21 and with the condition of Corollary 3.1, we have a following result.

[Part 1] Recall that the sufficient condition for ensemble minimaxity is given by Corollary 3.1. By 1–5, we have only to check (3.7) in Corollary 3.1.

So it suffices to show