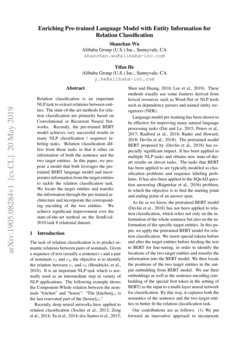 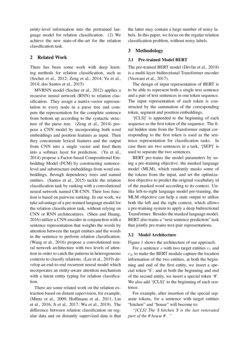 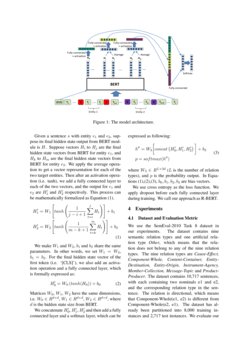 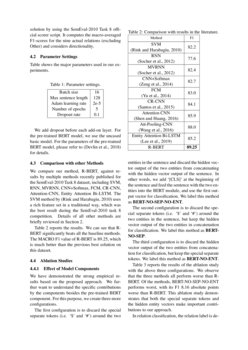 To Tune or Not To Tune? How About the Best of Both Worlds?

Human beings can imagine the colours of a grayscale image with no partic...
Rita Pucci, et al. ∙

"When they say weed causes depression, but it's your fav antidepressant": Knowledge-aware Attention Framework for Relationship Extraction

With the increasing legalization of medical and recreational use of cann...
Shweta Yadav, et al. ∙

The task of relation classification is to predict semantic relations between pairs of nominals. Given a sequence of text (usually a sentence) s and a pair of nominals e1 and e2, the objective is to identify the relation between e1 and e2 (Hendrickx et al., 2010). It is an important NLP task which is normally used as an intermediate step in variety of NLP applications. The following example shows the Component-Whole relation between the nominals “kitchen” and “house”: “The [kitchen]e1 is the last renovated part of the [house]e1.”

There has been some work with deep learning methods for relation classification, such as

applies a recursive neural network (RNN) to relation classification. They assign a matrix-vector representation to every node in a parse tree and compute the representation for the complete sentence from bottom up according to the syntactic structure of the parse tree.

propose a CNN model by incorporating both word embeddings and position features as input. Then they concatenate lexical features and the output from CNN into a single vector and feed them into a softmax layer for prediction.

(Shen and Huang, 2016) utilize a CNN encoder in conjunction with a sentence representation that weights the words by attention between the target entities and the words in the sentence to perform relation classification. (Wang et al., 2016)

propose a convolutional neural network architecture with two levels of attention in order to catch the patterns in heterogeneous contexts to classify relations.

‘[CLS]’ is appended to the beginning of each sequence as the first token of the sequence. The final hidden state from the Transformer output corresponding to the first token is used as the sentence representation for classification tasks. In case there are two sentences in a task, ‘[SEP]’ is used to separate the two sentences.

BERT pre-trains the model parameters by using a pre-training objective: the “masked language model” (MLM), which randomly masks some of the tokens from the input, and set the optimization objective to predict the original vocabulary id of the masked word according to its context. Unlike left-to-right language model pre-training, the MLM objective can help a state output to utilize both the left and the right context, which allows a pre-training system to apply a deep bidirectional Transformer. Besides the masked language model, BERT also trains a “next sentence prediction” task that jointly pre-trains text-pair representations.

Figure 1 shows the architecture of our approach.

For example, after insertion of the special separate tokens, for a sentence with target entities “kitchen” and “house” will become to:

We make W1 and W2, b1 and b2 share the same parameters. In other words, we set W1=W2, b1=b2. For the final hidden state vector of the first token (i.e. ‘[CLS]’), we also add an activation operation and a fully connected layer, which is formally expressed as:

We concatenate H′0, H′1, H′2 and then add a fully connected layer and a softmax layer, which can be expressed as following:

where W3∈RL×3d (L is the number of relation types), and p

is the probability output. In Equations (

We use cross entropy as the loss function. We apply dropout before each fully connected layer during training. We call our approach as R-BERT.

We use the SemEval-2010 Task 8 dataset in our experiments. The dataset contains nine semantic relation types and one artificial relation type Other, which means that the relation does not belong to any of the nine relation types. The nine relation types are Cause-Effect, Component-Whole, Content-Container, Entity-Destination, Entity-Origin, Instrument-Agency, Member-Collection, Message-Topic and Product-Producer. The dataset contains 10,717 sentences, with each containing two nominals e1 and e2, and the corresponding relation type in the sentence. The relation is directional, which means that Component-Whole(e1, e2) is different from Component-Whole(e2, e1). The dataset has already been partitioned into 8,000 training instances and 2,717 test instances. We evaluate our solution by using the SemEval-2010 Task 8 official scorer script. It computes the macro-averaged F1-scores for the nine actual relations (excluding Other) and considers directionality.

Table shows the major parameters used in our experiments.

4.3 Comparison with other Methods

We compare our method, R-BERT, against results by multiple methods recently published for the SemEval-2010 Task 8 dataset, including SVM, RNN, MVRNN, CNN+Softmax, FCM, CR-CNN, Attention-CNN, Entity Attention Bi-LSTM. The SVM method by (Rink and Harabagiu, 2010) uses a rich feature set in a traditional way, which was the best result during the SemEval-2010 task 8 competition. Details of all other methods are briefly reviewed in Section 2.

Table 2 reports the results. We can see that R-BERT significantly beats all the baseline methods. The MACRO F1 value of R-BERT is 89.25, which is much better than the previous best solution on this dataset.

We have demonstrated the strong empirical results based on the proposed approach. We further want to understand the specific contributions by the components besides the pre-trained BERT component. For this purpose, we create three more configurations.

The second configuration is to discard the special separate tokens (i.e. ‘$’ and ‘#’) around the two entities in the sentence, but keep the hidden vector output of the two entities in concatenation for classification. We label this method as BERT-NO-SEP.

The third configuration is to discard the hidden vector output of the two entities from concatenation for classification, but keep the special separate tokens. We label this method as BERT-NO-ENT.

Table 3 reports the results of the ablation study with the above three configurations. We observe that the three methods all perform worse than R-BERT. Of the methods, BERT-NO-SEP-NO-ENT performs worst, with its F1 8.16 absolute points worse than R-BERT. This ablation study demonstrates that both the special separate tokens and the hidden entity vectors make important contributions to our approach.

In this paper, we develop an approach for relation classification by enriching the pre-trained BERT model with entity information. We add special separate tokens to each target entity pair and utilize the sentence vector as well as target entity representations for classification. We conduct experiments on the SemEval-2010 benchmark dataset and our results significantly outperform the state-of-the-art methods. One possible future work is to extend the model to apply to distant supervision.