With the rapid growing of remotely sensed imagery data, there is a high demand for effective and efficient image retrieval tools to manage and exploit such data. In this letter, we present a novel content-based remote sensing image retrieval method based on Triplet deep metric learning convolutional neural network (CNN). By constructing a Triplet network with metric learning objective function, we extract the representative features of the images in a semantic space in which images from the same class are close to each other while those from different classes are far apart. In such a semantic space, simple metric measures such as Euclidean distance can be used directly to compare the similarity of images and effectively retrieve images of the same class. We also investigate a supervised and an unsupervised learning methods for reducing the dimensionality of the learned semantic features. We present comprehensive experimental results on two publicly available remote sensing image retrieval datasets and show that our method significantly outperforms state-of-the-art. 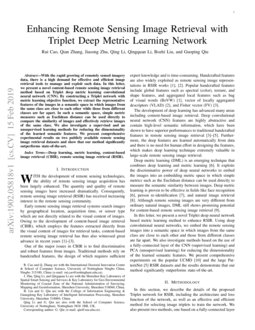 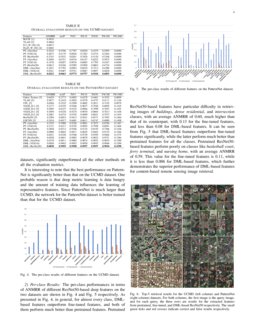 The development of deep learning has advanced many areas including content-based image retrieval. Deep convolutional neural network (CNN) features are highly abstractive and contain high-level semantic information, which have been shown to have superior performances to traditional handcrafted features in remote sensing image retrieval [3, 4, 5]

. Furthermore, the deep features are learned automatically from data and there is no need for human effort in designing the features, which makes deep learning technique extremely valuable in large-scale remote sensing image retrieval.

. It exploits the discriminative power of deep neural networks to embed the images into an embedding metric space in which simple metrics such as the Euclidean distance can be used directly to measure the semantic similarity between images. Deep metric learning is proven to be effective in fields like face recognition

In this letter, we present a novel Triplet deep neural network based metric learning method to enhance RSIR. Using deep convolutional neural networks, we embed the remote sensing images into a semantic space in which images from the same class are close to each other and those from different classes are far apart. We also investigate methods based on the use of a fully-connected layer of the CNN (supervised learning) and PCA (unsupervised learning) for reducing the dimensionality of the learned semantic features. We present comprehensive experiments on the popular UCMD

[10] and the large PatternNet [5] RSIR datasets and the results demonstrate that our method significantly outperforms state-of-the-art.

In this section, we describe the details of the proposed Triplet network for RSIR, including the architecture and loss function of the network, as well as an effective and efficient method for selecting image triplets to train the network. We also present two methods, one based on a fully-connected layer of the CNN (supervised learning) and the other based on PCA (unsupervised learning), to reduce the dimension of extracted features from the proposed network for retrieval.

The overall architecture of our proposed Triplet network is shown in Fig. 1. The network is composed of three identical convolutional neural networks which share the same weights. In the training phase, three sample images (a triplet) are fed into each network respectively, one image is set as anchor, the other two are positive and negative samples. The positive sample is of the same class as the anchor, while the negative sample belongs to a different class. The three identical networks take input image triplets and output three corresponding feature maps. The feature maps are then vectorized by the global average pooling (GAP) operation to obtain fixed-length embedding features, which are further L2-normalized. Finally, the distance between the three extracted vectors will be used to compute the loss to train the network. In the testing phase, images can be fed into one of the three identical networks to extract the fixed-length feature vectors for retrieval.

The goal of the Triplet network is to learn a metric embedding function fθ(x):RI→RF that maps the input images to a feature space so that semantically similar images in RI are metrically close in RF, where the function fθ parameterized by θ represents the CNN-based feature extractor. This is achieved by designing a triplet loss.

For an arbitrary image Ii, xi=fθ(Ii) is the corresponding feature vector in the metric embedding space. Let the metric to measure the similarity of images in the embedding space be d(xi,xj):RF×RF→R. In this letter, squared Euclidean distance d(xi,xj)=∥∥xi−xj∥∥22 is used as metric. Then, for a triplet of images T=(Ia,Ip,In), where Ia, Ip, In are the anchor, positive, and negative images respectively, and la,lp,ln (la=lp≠ln) are their corresponding class labels, the corresponding embedding vectors are (xa,xp,xn)=(fθ(Ia),fθ(Ip),fθ(In)), and thereby the triplet loss function can be formulated as follows:

where [x]+ represents max(x,0), m denotes the margin. d(xa,xp) and d(xa,xn) are the distances between the anchor-positive and the anchor-negative pairs respectively, measured by the metric in the embedding space RF.

The intuition of the triplet loss is to make the positive sample closer to the anchor while push the negative sample far away. The process is illustrated in Fig. 2.

It is crucial to select informative triplets for Triplet network training. The naive way is to select triplets offline, by randomly picking positive samples from the same class as the anchor (except the anchor), and negative samples from any other classes. However, this method is both inefficient and ineffective. In a mini-batch with 3N images, there would only be N triplets.

In this letter, we use the batch all triplet mining technique [7] to select triplets. The key idea is to exhaust all the valid triplets within a mini-batch to compute the loss in the training phase. In a mini-batch I, let NC denotes the number of all the classes, NK denotes the number of images per class, then there would be (NK×NC)×(NK−1)×(NK×NC−NK) image triplets within the mini-batch. Let Iia (anchor) and Iip (positive) be the a-th and p-th image in class i, while Ijn (negative) be the n-th image in class j, then the loss function within the mini-batch can be formulated as follows:

where (xia,xip,xjn)=(fθ(Iia),fθ(Iip),fθ(Ijn)) are the corresponding embedding vectors of image triplets (Iia,Iip,Ijn).

Compared with the naive offline triplet-selection strategy, the triplet mining method greatly increases the efficacy of training by exploiting all the valid triplets online within a training mini-batch. This makes full use of the hard samples of each training batch to compute loss, and thus makes the training process easier to converge.

Deep features directly extracted from the proposed Triplet network are of high dimensions, which impacts the efficiency of similarity search in image retrieval and requires large storage. To address this issue, we use a method based on the fully-connected (FC) layer of the CNN (supervised learning), and a method based on the traditional PCA (unsupervised learning), to reduce the dimensionality of the semantic features.

The process of employing a fully-connected layer of the CNN for dimensionality reduction is illustrated in Fig. 3. In the training phase, the embedding vectors (extracted from the network in Fig. 1) are fed to a fully-connected layer of a lower dimension, which are then L2-normalized to compute the final loss. In the testing phase, the L2-normalized condensed vector can be exploited as the representative feature for retrieval.

L2-normalized and then used for image retrieval.

Two publicly available RSIR datasets, UCMD and PatternNet, are used to evaluate the proposed method. The University of California, Merced (UCMD) land use dataset [10] is the most widely used RSIR dataset. It includes 21 classes, with 100 images per class. All the images are 256×256 pixels, and the pixel resolution is about 0.3m. The images are extracted from the USGS Map from various US urban areas. PatternNet [5] is currently the largest publicly available dataset for remote sensing image retrieval. It consists of 38 classes, with 800 images per class, and the size of each image is 256×256 pixels. The spatial resolution of the images ranges from 0.062 to 4.693 meters. The images are collected from Google Earth and Google Maps imagery from US cities.

Three convolutional neural networks are employed as the basic networks for feature extraction, i.e. AlexNet [11], VGG16 [12], and ResNet50 [13]. For each network, only the convolutional layers are used to extract features, and global average pooling is operated on extracted output feature maps to obtain the final fixed-length feature vectors. The number of convolutional layers of the three CNNs and the dimension of their corresponding output features are listed in Table I.

In the experiments, the networks are implemented based on the PyTorch framework. Adam optimizer is used to train the Triplet network, with a learning rate of 0.00001 and a batch size of 30. The parameters of the networks are initialized by the corresponding network weights pretrained on ImageNet

. The maximum training iteration is set to 30 epochs. The margin of the triplet loss is empirically set to 0.2 which was found to work consistently well in all experimental settings on both datasets. Random horizontal and vertical image flips are applied as data augmentation.

For comparison, the features extracted by the pretrained and the fine-tuned CNNs (with convolutional layers only) are used as baselines. For fine-tuning, fully-connected layers and partial convolutional layers (last layer for AlexNet, last two layers for VGG16, and last three layers for ResNet50) are retrained on the training sets of UCMD and PatternNet respectively.

respectively. As can be seen, in general, DML-based features achieve the best performance, fine-tuned CNN features achieve competitive results, while pretrained features show the worst results. In addition, the deeper the network is, the better the image retrieval performance. It can be seen that DML-based ResNet50 features have achieved the best results on both datasets, significantly outperformed all the other methods on all the evaluation metrics.

As can be seen in Fig. 4 and Fig. 5, DML-based features perform significantly better than pretrained and fine-tuned CNN features for almost all the classes on both datasets. To investigate into the details, qualitative results of several difficult query cases are presented in Fig. 6, which shows the top-5 retrieved images that are similar to the query image, using features extracted by pretrained, fine-tuned, and DML-based ResNet50 networks respectively. In Fig. 6, the left column is the results on the UCMD dataset, and query images are from the classes of buildings, dense residential, intersection, and medium residential; the query results of the PatternNet dataset are presented in the right column, with query images from the classes of basketball court, ferry terminal, nursing home, and sparse residential

Fully-connected (FC) layers and principal component analysis (PCA) are used to reduce the dimension of extracted features. The retrieval performances of DML-based features with different dimensions (i.e. the original dimension, the reduced dimensions of 128, 64, 32, 16, and 8) using the two methods are shown in Fig.