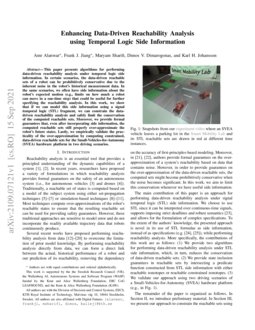 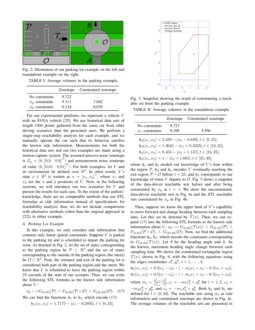 Reachability analysis is an essential tool that provides a principled understanding of the dynamic capabilities of a system [21, 30]. In recent years, researchers have proposed a variety of formulations in which reachability analysis provides formal guarantees on the safety of an autonomous system (i.e., for autonomous vehicles [5] and drones [15]). Traditionally, a reachable set of states is computed based on a model of the subject system using either set-propagation techniques [7, 31, 19] or simulation-based techniques [13, 23, 18, 25]. Most techniques compute over-approximations of the robot’s reachable states to ensure that the resulting reachable set can be used for providing safety guarantees. However, these traditional approaches are sensitive to model error and do not incorporate the readily available trajectory data that robots continuously produce.

Several recent works have proposed performing reachability analysis from data [10, 12, 11, 9, 8, 4, 27, 33, 6] to overcome the limitation of prior model knowledge. By performing reachability analysis directly from data, we can form a direct link between the actual, historical performance of a robot and our prediction of its reachability, removing the dependency on the accuracy of first-principles-based modeling. Moreover, in [2, 1], authors provide formal guarantees on the over-approximation of a system’s reachability based on data that contains noise. However, in order to provide guarantees on the over-approximation of the data-driven reachable sets, the computed sets might become prohibitively conservative when the noise becomes significant. In this work, we aim to limit this conservatism whenever we have useful side information.

The main contribution of this paper is an approach for performing data-driven reachability analysis under signal temporal logic (STL) side information. We choose to use STL since it can be interpreted over continuous-time signals, supports imposing strict deadlines and robust semantics [14], and allows for the formulation of complex specifications. To the extent of the authors’ knowledge, the presented approach is novel in its use of STL formulae as side information, instead of as specifications (e.g. [24, 17]), while performing reachability analysis. More specifically, the contributions of this work are as follows: (1) We provide two algorithms for performing data-driven reachability analysis under STL side information, which, in turn, reduces the conservatism of data-driven reachable sets. (2) We provide state inclusion guarantees in reachable sets by intersecting a predicate function constructed from STL side information with either reachable zonotopes or reachable constrained zonotopes. (3) We validate our approach using two driving scenarios of a Small-Vehicles-for-Autonomy (SVEA) hardware platform (e.g., in Fig. 1).

We assume f to be an unknown twice differentiable function and w(k)∈Zw to be process noise bounded by the set Zw.

In the following definitions, we define the reachable sets and different set representations used in our approach.

generator vectors in a generator matrix

, a zonotope is defined as

We use the shorthand notation Z=⟨cZ,GZ⟩.

The linear map is defined and computed as follows [3]:

The noise w(k) is random but bounded by the zonotope w(k)∈Zw=⟨cZw,GZw⟩. The Cartesian product of two zonotopes Z1 and Z2 is defined and computed as

With a minor abuse of notation, we write Z=zonotope(l–,¯l)⊂Rn to represent an interval I=[l–,¯l] as a zonotope. Zonotopes have been extended in [32] to represent polytopes by applying constraints on the factors multiplied with the generators.

where cC∈Rn is the center, GC ∈ Rn×ng is the generator matrix and AC∈ Rnc×ng and bC∈Rnc constrain the factors βC. In short, we write C=⟨cC,GC,AC,bC⟩.

(Strip [22]) For given parameters yi,k∈Rp,Hi,k∈Rp×n and ri,k∈Rp, the strip Si,k is the set of all possible state values satisfying

(Nonlinear strip) For given hi,k(x)∈Rp and ri,k∈Rp the nonlinear strip Ni,k is the set of all possible state values satisfying

We denote the Moore-Penrose pseudoinverse by † and the Kronecker product by ⊗. We also the denote the vector j of a matrix A by (A).,j.

STL is an expressive language that is able to model complex, time-varying side information. STL is based on predicates ν which are obtained by evaluation of a predicate function h(x):Rd→R, where ν:=⊤ (True) if h(x)≥0 and ν:=⊥ (False) if h(x)<0 for x∈Rd [26]. In this paper, we consider side information that can be modeled with the following STL fragment:

where ϕ,ϕ′,ϕ′′ are STL formulas. In addition, U[a,b] is the until operator with a≤b<∞, and F[a,b]ϕ=⊤U[a,b]ϕ and G[a,b]ϕ=¬F[a,b]¬ϕ are eventually and always operators, respectively. Let (x,t)⊨¯ϕ denote the satisfaction relation. A formula ¯ϕ is satisfiable if ∃x:R≥0→Rd such that (x,t)⊨¯ϕ. STL semantics are defined formally as follows:

We omit the time to simplify the notation and write x⊨ϕ.

In this section, we show how we compute data-driven reachable sets from recorded trajectories. Consider K input-state data trajectories of length Tj, j=1,…,K, from system (1), given by {u(j)(k)}Tj−1k=0, {x(j)(k)}Tjk=0. Denote the following matrices containing the set of all data sequence.

The total number of data points is denoted by T=∑Kj=1Tj, and the set of all data by D={U−,X}.

After collecting the data offline, we calculate an over-approximation of the reachable sets online using Algorithm 1 [1]. We compute a least-squares model ~M at a linearization point (u⋆k,x⋆k) in line 1 where Mw=⟨CMw,~GMw⟩ is a the noise matrix zonotope [1] with center matrix CMw and a list of generator matrices ~GMw. Then, we compute a zonotope that over-approximates the model mismatch and the nonlinearity terms in lines 2 to 4. Given that the data have a limited covering radius, we compute a Lipschitz zonotope in line 5 to provide guarantees. Next, we perform the reachability recursion in line 6 given the previously computed zonotopes. Note that the Lipschitz constant L⋆ and covering radius δ can be computed as proposed in [1, 28, 29].

Now that we have introduced the necessary preliminaries, we can detail the problem that we aim to solve.

Given the STL side information ϕk=ϕ1,k∧⋯∧ϕnϕ,k,k with ϕi,k of the form (7) i=1,…,nϕ,k, a historical data set D={U−,X} collected from an unknown system model, noise zonotope Zw, and input zonotope Uk, compute the STL reachable set ¯RN at time step k = N starting from initial zonotope X0 that properly over-approximates the set of states Rϕ,N where

In the previous section, we showed how to generate a data-driven reachable set from input-state data. In this section, we show how to incorporate STL formulas in data-driven reachability analysis. Algorithm 2 summarizes our proposed approach using zonotopes. The input to the algorithm is the data-driven reachable zonotope ^Zk from Algorithm 1 and STL side information ϕi,k, i=1,…,nϕ,k, of the form (7). In line 3, we construct a predicate function hi,k(x) from ϕi,k, such that if hi,k(x)≥0, then x⊨ϕi,k [14]. We consider first the linear case, where hi,k(x) is a linear formula with respect to x. In this case, we represent hi,k(x) by a linear strip Si,k in (5) by having hi,k(x)=ri,k−|Hi,kx−yi,k|. The intersection between the linear strip hi,k(x)≥0 and the current zonotope is provided in lines 6 and 7. Many scenarios contain nonlinearity in the side information in which we propose to represent the hi,k(x) as a nonlinear strip Ni,k and perform an intersection with the data-driven reachable set. More specifically, we consider nonlinear strips in (5) with hi,k(x)=ri,k−|hi,k(x)|, where the intersection is provided in lines 10 and 11.

The reachable set ^Rk can be represented by a zonotope ^Zk from Algorithm 1 or as a constrained zonotope ^Ck [1]. Using constrained zonotopes allows for less conservative results, but come with extra computational cost. We propose Algorithm 3 to compute reachable sets under STL side information using constrained zonotope. Similar to Algorithm 2, we construct hi,k(x) from ϕi,k in line 3. Then, we provide intersection between constrained zonotope and linear hi,k(x) in lines 6 and 7. In case of nonlinear hi,k(x), we provide the intersection in lines 10 to 12. In both Algorithms 2 and 3, we guarantee state inclusion by providing an over-approximated intersection between the data-driven reachable set and the hi,k(x)≥0. To guarantee state inclusion in the STL generated set in case of nonlinear hi,k(x), we linearize and over-approximate the infinite Taylor series by a first order Taylor series and its Lagrange remainder ZL,i,k=⟨cL,i,k,GL,i,k⟩ [5, p.65]. The next theorems shows the provided guarantees.

In order to prove state inclusion guarantees, we show that the resultant intersection ¯Zk between Ni,k:hi,k(x)≥0 and the reachable zonotope ^Zk=⟨^ck,^Gk⟩ contains the state in all cases. We omit the proof in the linear case as it follows immediately from [22, Prop.1]. We prove the guaranteed intersection in the nonlinear case as follows: We aim to find the zonotope that over-approximates the intersection. Let x∈(^Zk∩Ni,k), then there is a zk, where

Adding and subtracting λi,k∂hi,k∂x|x∗i,k^Gkzk to (9) results in

Similar to the proof of Theorem 1, we omit the proof for the linear case as it follows immediately from [32, Prop.1] and prove the guaranteed intersection in the nonlinear case as follows: Let x∈(^Ck∩Ni,k), then there is a zk∈[−1ng×1,1ng×1] such that

Given that x is inside the intersection of the constrained zonotope ^Ck and Ni,k, there exists a d∈[−1,1] such that

We combine (16) and (14) while considering the Lagrange remainder yields

Note that we consider the superset consisting the equality (16) by solving it for all d∈[−1,1]. Then, we can assure that (16) is also satisfied.

In the next section, we empirically show that the reachable sets computed from these intersections is a practical improvement compared to original data-driven reachable sets.

In this section, we detail the application of our method to two examples. Readers can find an overview video of our experiments conducted at the Smart Mobility Lab at [https://bit.ly/DataReachSTL].

For our experimental platform, we represent a vehicle V with an SVEA vehicle [17]. We use historical data sets of length 1000 points gathered from the same car from other driving scenarios than the presented ones. We perform a single-step reachability analysis for each example, and we manually operate the car such that its behavior satisfies the known side information. Measurements for both the historical data sets and our two examples are made using a motion capture system. The assumed process noise zonotope is Zw=⟨0,[0.90.9]T⟩ and measurement noise zonotope of value ⟨0,[0.010.01]T⟩. For both examples, let V and its environment be defined over R2. In other words, V’s state x∈R2 is written as x=[x1,x2]⊤, where x1 and x2 are the x and y positions of V. Now, in the following sections, we will introduce our two scenarios for V and present the results for each case. To the extent of the authors’ knowledge, there are no comparable methods that use STL formulae as side information instead of specifications for reachability analysis; thus, we do not include comparisons with alternative methods (other than the original approach in [1]) in either example.

Then, suppose we know the upper limit of V’s capability to move forward and change heading between each sampling time. Let this set be denoted by T(x). Then, we can expand (17) into the following STL formula as the known side information about V: . Now, we find the additional functions h6, h7, which encode the constraints corresponding to G[0,40](T(x)). Let θ be the heading angle and θc be the known, maximum heading angle change between each sampling time. We derive the constrained rectangular region T(x), shown in Fig. 6, with the following equations using the edges coordinates xθi,yθi, i=1,⋯,4: