We report on improvements to ACL2 made since the 2013 ACL2 Workshop. 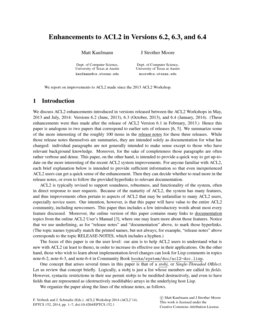 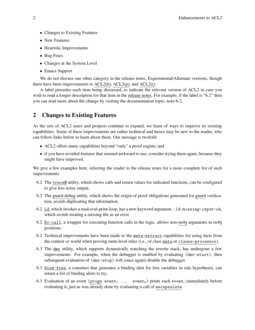 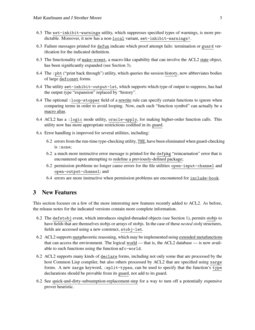 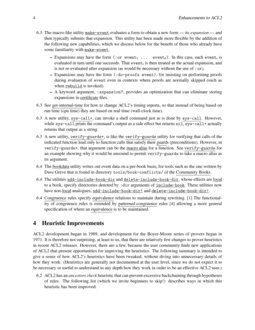 We discuss ACL2 enhancements introduced in versions released between the ACL2 Workshops in May, 2013 and July, 2014: Versions 6.2 (June, 2013), 6.3 (October, 2013), and 6.4 (January, 2014). (These enhancements were thus made after the release of ACL2 Version 6.1 in February, 2013.) Hence this paper is analogous to two papers that correspond to earlier sets of releases [7, 6]. We summarize some of the more interesting of the roughly 100 items in the release notes for these three releases. While those release notes themselves are summaries, they are intended solely as documentation for what has changed: individual paragraphs are not generally intended to make sense except to those who have relevant background knowledge. Moreover, for the sake of completeness those paragraphs are often rather verbose and dense. This paper, on the other hand, is intended to provide a quick way to get up-to-date on the more interesting of the recent ACL2 system improvements. For anyone familiar with ACL2, each brief explanation below is intended to provide sufficient information so that even inexperienced ACL2 users can get a quick sense of the enhancement. Then they can decide whether to read more in the release notes, or even to follow the provided hyperlinks to relevant documentation.

ACL2 is typically revised to support soundness, robustness, and functionality of the system, often in direct response to user requests. Because of the maturity of ACL2, the system has many features, and thus improvements often pertain to aspects of ACL2 that may be unfamiliar to many ACL2 users, especially novice users. Our intention, however, is that this paper will have value to the entire ACL2 community, including newcomers. This paper thus includes a few introductory words about most every feature discussed. Moreover, the online version of this paper contains many links to documentation topics from the online ACL2 User’s Manual [4], where one may learn more about those features. Notice that we use underlining, as for “release notes” and “documentation” above, to mark those hyperlinks. (The topic names typically match the printed names, but not always; for example, “release notes” above corresponds to the topic RELEASE-NOTES, which includes a hyphen.)

The focus of this paper is on the user level: our aim is to help ACL2 users to understand what is new with ACL2 (at least to them), in order to increase its effective use in their applications. On the other hand, those who wish to learn about implementation-level changes can look for Lisp comments in topics note-6-2, note-6-3, and note-6-4 in Community Book books/system/doc/acl2-doc.lisp.

One concept that arises several times in this paper is that of a stobj, or Single-Threaded OBJect. Let us review that concept briefly. Logically, a stobj is just a list whose members are called its fields. However, syntactic restrictions in their use permit stobjs to be modified destructively, and even to have fields that are represented as (destructively modifiable) arrays in the underlying host Lisp.

We organize the paper along the lines of the release notes, as follows.

We do not discuss one other category in the release notes, Experimental/Alternate versions, though there have been improvements to ACL2(h), ACL2(p), and ACL2(r).

A label precedes each item being discussed, to indicate the relevant version of ACL2 in case you wish to read a longer description for that item in the release notes. For example, if the label is “6.2” then you can read more about the change by visiting the documentation topic, note-6-2.

As the sets of ACL2 users and projects continue to expand, we learn of ways to improve its existing capabilities. Some of these improvements are rather technical and hence may be new to the reader, who can follow links below to learn about them. Our message is twofold:

We give a few examples here, referring the reader to the release notes for a more complete list of such improvements.

This section focuses on a few of the more interesting new features recently added to ACL2. As before, the release notes for the indicated versions contain more complete information.

ACL2 development began in 1989, and development for the Boyer-Moore series of provers began in 1971. It is therefore not surprising, at least to us, that there are relatively few changes to prover heuristics in recent ACL2 releases. However, there are a few, because the user community finds new applications of ACL2 that present opportunities for improving the heuristics. The following summary is intended to give a sense of how ACL2’s heuristics have been tweaked, without diving into unnecessary details of how they work. (Heuristics are generally not documented at the user level, since we do not expect it to be necessary or useful to understand in any depth how they work in order to be an effective ACL2 user.)

Among the bugs fixed were soundness bugs, which are all mentioned below. These tend to be obscure, and most are not generally encountered by users; but we consider them particularly important to fix. Among the other bugs fixed, we mention here only a few of the more interesting ones.

Thus we begin with a description of the soundness bugs that were fixed. In contrast to the rest of this paper, we do not attempt to explain much about these bugs, not even how they could lead to proofs of nil. Pointers to some of those proofs can be found in the release notes.

Here are a few of the more interesting bugs that were fixed, other than soundness bugs.

6 Changes at the System Level

Some of the more sweeping changes to ACL2 have taken place far from its theorem prover. Here we touch briefly on just a few of those.

The primary Emacs-related ACL2 enhancement is a new utility introduced in Version 6.4, ACL2-Doc, for browsing documentation inside Emacs. This utility takes the place of Emacs Info, which is no longer supported because of the transition to XDOC discussed in Section 6. Emacs users will find this utility to be a nice alternative to using :doc at the terminal. It can be used to browse either the acl2+books combined manual or the ACL2 User’s Manual. This utility is loaded automatically into Emacs when loading the standard file emacs/emacs-acl2.el.

We have outlined some of the more interesting and important changes to ACL2 in Versions 6.2, 6.3, and 6.4. We hope that a quick read of this paper will enable ACL2 users to focus quickly on topics of particular interest, while easily following links (in the online version of this paper) in order to learn more about those topics, with the result of becoming more effective ACL2 users. Many more changes (about 100 altogether) are described in the release notes for these versions, and many changes at a lower level are described in comments in the source code for those release notes, such as (defxdoc note-6-2 ...), in Community Book books/system/doc/acl2-doc.lisp.

A critical component in the continued evolution of ACL2 is feedback from its user community, which we hope will continue! We also appreciate contributions by the user community to the large body of Community Books [3]. These books put demands on the system and help us to test improvements.

We thank members of the ACL2 community whose feedback has led us to continue making improvements to ACL2. In particular, we thank the following, who are the people mentioned in one or more specific items in the release notes for Version 6.2, 6.3, or 6.4: Harsh Raju Chamarthi, Jared Davis, Jen Davis, Caleb Eggensperger, Shilpi Goel, Dave Greve, Warren Hunt, Robert Krug, Camm Maguire, David Rager, Gisela Rossi, Sol Swords, Raymond Toy, and Nathan Wetzler,

We expressly thank Warren Hunt for his continuing support of ACL2 use and development for many years at UT Austin.

We are grateful to Shilpi Goel, Warren Hunt, Robert Krug, Sandip Ray, Nathan Wetzler, and the referees for feedback on drafts of this paper.