The semantic web has received many contributions of researchers as ontologies which, in this context, i.e. within RDF linked data, are formalized conceptualizations that might use different protocols, such as RDFS, OWL DL and OWL FULL. In this article, we describe new expressive techniques which were found necessary after elaborating dozens of OWL ontologies for the scientific academy, the State and the civil society. They consist in: 1) stating possible uses a property might have without incurring into axioms or restrictions; 2) assigning a level of priority for an element (class, property, triple); 3) correct depiction in diagrams of relations between classes, between individuals which are imperative, and between individuals which are optional; 4) a convenient association between OWL classes and SKOS concepts. We propose specific rules to accomplish these enhancements and exemplify both its use and the difficulties that arise because these techniques are currently not established as standards to the ontology designer. 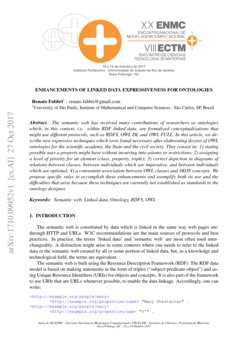 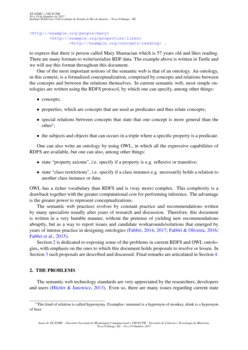 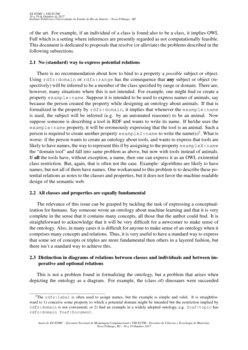 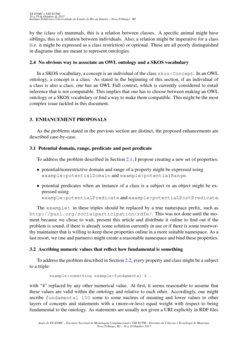 Ontologies can be a powerful tool for structuring knowledge, and they ar...
Paolo Pareti, et al. ∙

Relaxing and Restraining Queries for OBDA

OntoLoki: an automatic, instance-based method for the evaluation of biological ontologies on the Semantic Web

The delineation of logical definitions for each class in an ontology and...
Benjamin M. Good, et al. ∙

The Internet and the Web are now an integral part of the way most modern...
Carlos Laufer, et al. ∙

The semantic web is constituted by data which is linked in the same way web pages are: through HTTP and URLs. W3C recommendations are the main sources of protocols and best practices. In practice, the terms ’linked data’ and ’semantic web’ are most often used interchangeably. A distinction might arise in some contexts where one needs to refer to the linked data or the semantic web created by all or some portion of linked data, but, as a knowledge and technological field, the terms are equivalent.

One of the most important notions of the semantic web is that of an ontology. An ontology, in this context, is a formalized conceptualization, comprised by concepts and relations between the concepts and between the relations themselves. In current semantic web, most simple ontologies are written using the RDFS protocol, by which one can specify, among other things:

One can also write an ontology by using OWL, in which all the expressive capabilities of RDFS are available, but one can also, among other things:

OWL has a richer vocabulary than RDFS and is (way more) complex. This complexity is a drawback together with the greater computational cost for performing inference. The advantage is the greater power to represent conceptualizations.

The semantic web practices evolves by constant practice and recommendations written by many specialists usually after years of research and discussion. Therefore, this document is written in a very humble manner, without the pretense of yielding new recommendations abruptly, but as a way to report issues and candidate workarounds/solutions that emerged by years of intense practice in designing ontologies (Fabbri, 2014, 2017; Fabbri & Oliveira, 2016; Fabbri et al., 2015).

Section 2 is dedicated to exposing some of the problems in current RDFS and OWL ontologies, with emphasis on the ones to which this document holds proposals to resolve or lessen. In Section 3 such proposals are described and discussed. Final remarks are articulated in Section 4.

The semantic web technology standards are very appreciated by the researchers, developers and users (Hitzler & Janowicz, 2013). Even so, there are many issues regarding current state of the art. For example, if an individual of a class is found also to be a class, it implies OWL Full which is a setting where inferences are presently regarded as not computationally feasible. This document is dedicated to proposals that resolve (or alleviate) the problems described in the following subsections.

There is no recommendation about how to bind to a property a possible subject or object. Using rdfs:domain or rdfs:range has the consequence that any subject or object (respectively) will be inferred to be a member of the class specified by range or domain. There are, however, many situations where this is not intended. For example, one might find or create a property example:name. Suppose it is intended to be used to express names of animals, say because the person created the property while designing an ontology about animals. If that is formalized in the property by rdfs:domain, it implies that whenever the example:name

is used, the subject will be inferred (e.g. by an automated reasoner) to be an animal. Now suppose someone is describing a tool in RDF and wants to write its name. If he/she uses the

example:name property, it will be erroneously expressing that the tool is an animal. Such a person is required to create another property example2:name to write the name(s)222The rdfs:label is often used to assign names, but the example is simple and valid. It is straightforward to 1) conceive some property to which a potential domain might be intended but the restriction implied by rdfs:domain is not convenient; or 2) find an example in a widely adopted ontology, e.g. foaf:topic has rdfs:domain foaf:Document.. What is worse: if the person wants to create an ontology about tools, and wants to express that tools are likely to have names, the way to represent this if by assigning to the property exampleX:name the “domain tool” and fall into same problem as above, but now with tools instead of animals. If all the tools have, without exception, a name, then one can express it as an OWL existential class restriction. But, again, that is often not the case. Example: algorithms are likely to have names, but not all of them have names. One workaround to this problem is to describe these potential relations as notes to the classes and properties, but it does not favor the machine readable design of the semantic web.

2.2 All classes and properties are equally fundamental

The relevance of this issue can be grasped by tackling the task of expressing a conceptualization for humans. Say someone wrote an ontology about machine learning and that it is very complete in the sense that it contains many concepts, all those that the author could find. It is straightforward to acknowledge that it will be very difficult for a newcomer to make sense of the ontology. Also, in many cases it is difficult for anyone to make sense of an ontology when it comprises many concepts and relations. Thus, it is very useful to have a standard way to express that some set of concepts or triples are more fundamental then others in a layered fashion, but there isn’t a standard way to achieve this.

2.3 Distinction in diagrams of relations between classes and individuals and between imperative and optional relations

This is not a problem found in formalizing the ontology, but a problem that arises when depicting the ontology as a diagram. For example, the (class of) dinosaurs were succeeded by the (class of) mammals, this is a relation between classes. A specific animal might have siblings, this is a relation between individuals. Also, a relation might be imperative for a class (i.e. it might be expressed as a class restriction) or optional. These are all poorly distinguished in diagrams that are meant to represent ontologies.

2.4 No obvious way to associate an OWL ontology and a SKOS vocabulary

In a SKOS vocabulary, a concept is an individual of the class skos:Concept. In an OWL ontology, a concept is a class. As stated in the beginning of this section, if an individual of a class is also a class, one has an OWL Full context, which is currently considered to entail inference that is not computable. This implies that one has to choose between making an OWL ontology or a SKOS vocabulary or find a way to make them compatible. This might be the most complex issue tackled in this document.

As the problems stated in the previous section are distinct, the proposed enhancements are described case-by-case.

To address the problem described in Section 2.1, I propose creating a new set of properties:

The example: in these triples should be replaced by a true namespace prefix, such as http://purl.org/socialparticipation/rdfe/

. This was not done until the moment because we chose to wait, present this article and distribute it online to find out if the problem is sound, if there is already some solution currently in use or if there is some trustworthy maintainer that is willing to keep these properties online in a more suitable namespace. As a last resort, we (me and partners) might create a reasonable namespace and bind these properties.

3.2 Ascribing numeric values that reflect how fundamental is something

To address the problem described in Section 2.2, every property and class might be a subject to a triple: [fontsize=] example:something example:fundamental 4 . with “4” replaced by any other numerical value. At first, it seems reasonable to assume that these values are valid within the ontology and relative to each other. Accordingly, one might ascribe fundamental 100

some to some nucleus of meaning and lower values to other layers of concepts and statements with a (more-or-less) equal weight with respect to being fundamental to the ontology. As statements are usually not given a URI explicitly in RDF files (one has to use “RDF reification” to give a triple a URI), to bind a triple or a set of triples to a level, one will probably be better of by using named graphs. Reification is a solution, but a rather verbose and unusual one.

To address the problem described in Section 2.3, we notice that: 1) the edges are often small, so using line styles (such as dashed, dotted or full) is likely to yield bad results often. The use of colored edges is an option, but given that many journals require images to be black and white, it is not suitable as the standard at least at the moment. Nevertheless notice that different arrow heads are in fact used (almost as a standard) as visual cues to differentiate relations that are yield by properties from those that associate a class to its superclass, This is an indicative that using different arrow heads might be a good strategy to reaching a good solution. Also, the start of the edge might be a good visual cue to discern different types of relations. We should recall here that in OWL a property might be specified to satisfy a number of axioms, which are also prone to be represented with these same artifices.

There are different strategies for making an OWL ontology and a SKOS vocabulary compatible (Bechhofer & Miles, 2008). The solutions that are fit for general purposes, among the ones that were found or conceived by the author, are:

The problem with the other solutions:

This article is a formalization of the issues to allow the author and collaborators to confirm (or refute) that these problems and the solutions herein proposed are sound and have not yet received solutions by the semantic web community. These issues and solutions are the result of years of dedication to the subject, including learning by (online and in-person) classes and designing dozens of OWL ontologies for academic and State purposes (Fabbri, 2014, 2017; Fabbri & Oliveira, 2016).

Next steps should include:

The author thanks CNPq for the funding received while researching the topic of this article, the researchers of IFSC/USP and ICMC/USP for the recurrent collaboration in every situation where we needed directions for investigation.