In medical emergencies, an instant and secure messaging is an important service to provide quality healthcare services. A session initiation protocol (SIP) is an IP-based multimedia and telephony communication protocol used to provide instant messaging services. Thus, design of secure and efficient SIP for quality medical services is an emerging problem. In this paper, we first explore the security limitations of the existing SIPs proposed by Sureshkumar et al. and Zhang et al. in the literature. Our analysis shows that most of the existing schemes fail to protect the user credentials when unexpectedly the session-specific ephemeral secrets revealed to an adversary by the session exposure attacks. We then present a possible improvement over Sureshkumar et al.'s scheme without increasing the computational cost. We compare the proposed improvement for computational overheads and security features with the various related existing schemes in the literature. 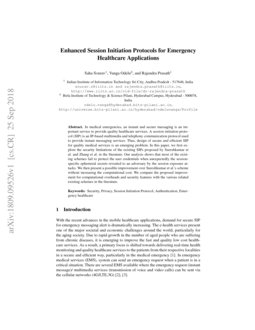 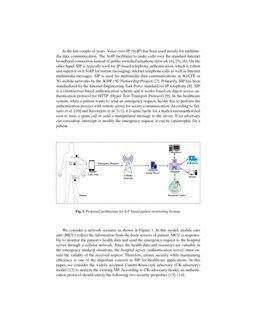 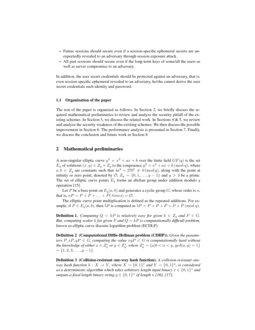 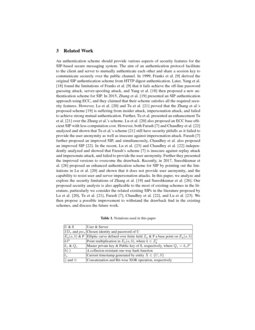 With the recent advances in the mobile healthcare applications, demand for secure SIP for emergency messaging alert is dramatically increasing. The e-health services present one of the major societal and economic challenges around the world, particularly for the aging society. Due to rapid growth in the number of aged people who are suffering from chronic diseases, it is emerging to improve the fast and quality low cost healthcare services. As a result, a primary focus is shifted towards delivering real-time health monitoring and quality healthcare services to the patients from their respective localities in a secure and efficient way, particularly in the medical emergency [1]. In emergency medical services (EMS), system can send an emergency request when a patient is in a critical situation. There are several EMS available where the emergency request (instant message)/ multimedia services (transmission of voice and video calls) can be sent via the cellular networks (4G/LTE,3G) [2], [3].

In the last couple of years, Voice-over-IP (VoIP) has been used mostly for multimedia data communication. The VoIP facilitates to make calls over the standard Internet broadband connection instead of public switched telephone network [4], [5], [6]. On the other hand, SIP is typically used for IP-based telephony authentication, which is robust and superior over VoIP for instant messaging, internet telephone calls as well as Internet multimedia messages. SIP is used for multimedia data communications in 4G/LTE or 3G mobile networks by the 3GPP (3G Partnership Project) [7]. Primarily, SIP has been standardized by the Internet Engineering Task Force standard for IP telephony [8]. SIP is a client/server based authentication scheme and it works based on digest access authentication protocol for HTTP (Hyper Text Transport Protocol) [9]. In the healthcare system, when a patient wants to send an emergency request, he/she has to perform the authentication process with remote server for secure communication. According to Salsano et al. [10] and Keromytis et al. [11], it is quite facile for a malicious/unauthorized user to raise a spam call or send a manipulated message to the server. If an adversary can eavesdrop, intercept or modify the emergency request, it can be catastrophic for a patient.

We consider a network scenario as shown in Figure 1. In this model, mobile care unit (MCU) collect the information from the body sensors of patient. MCU is responsible to monitor the patient’s health data and send the emergency request to the hospital server through a cellular network. Since the health data and resources are valuable in the emergency medical situations, the hospital server (authentication server) must ensure the validity of the received request. Therefore, ensure security while maintaining efficiency is one of the important concern in SIP for healthcare applications. In this paper, we consider the widely accepted Canetti-Krawczyk adversary (CK-adversary) model [12] to analyze the existing SIP. According to CK-adversary model, an authentication protocol should satisfy the following two security properties [13], [14].

1.1 Organization of the paper

A non-singular elliptic curve y2=x3+ax+b over the finite field GF(q) is the set Eq of solutions (x,y) ∈Zq×Zq to the congruence y2=x3+ax+b(modq), where a,b∈Zq are constants such that 4a3+27b2≠0(modq), along with the point at infinity or zero point, denoted by O, Zq={0,1,…,q−1} and q>3 be a prime. The set of elliptic curve points Eq forms an abelian group under addition modulo q operation [15].

The elliptic curve point multiplication is defined as the repeated additions. For example, if P∈Eq(a,b), then 5P is computed as 5P=P+P+P+P+P(modq).

Computing Q=kP is relatively easy for given k∈Zq and P∈G. But, computing scalar k for given P and Q=kP is computationally difficult problem, known as elliptic curve discrete logarithm problem (ECDLP).

An authentication scheme should provide various aspects of security features for the SIP-based secure messaging system. The aim of an authentication protocol facilitate to the client and server to mutually authenticate each other and share a session key to communicate securely over the public channel. In 1999, Franks et al. [9] derived the original SIP authentication scheme from HTTP digest authentication. Later, Yang et al. [18] found the limitations of Franks et al. [9] that it fails achieve the off-line password guessing attack, server-spoofing attack, and Yang et al. [18] then proposed a new authentication scheme for SIP. In 2015, Zhang et al. [19] presented an SIP authentication approach using ECC, and they claimed that their scheme satisfies all the required security features. However, Lu et al. [20] and Tu et al. [21] proved that the Zhang et al.’s proposed scheme [19] is suffering from insider attack, impersonation attack, and failed to achieve strong mutual authentication. Further, Tu et al. presented an enhancement Tu et al. [21] over the Zhang et al.’s scheme. Lu et al. [20] also proposed an ECC base efficient SIP with less computation cost. However, both Farash [7] and Chaudhry et al. [22] analyzed and shown that Tu et al.’s scheme [21] still have security pitfalls as it failed to provide the user anonymity as well as insecure against impersonation attack. Farash [7] further proposed an improved SIP, and simultaneously, Chaudhry et al. also proposed an improved SIP [22]. In the recent, Lu et al. [23] and Chaudhry et al. [22] independently analyzed and showed that Farash’s scheme [7] is insecure against replay attack and impersonate attack, and failed to provide the user anonymity. Further they presented the improved versions to overcome the drawback. Recently, in 2017, Sureshkumar et al. [26] proposed an enhanced authentication scheme for SIP by pointing out the limitations in Lu et al. [20] and shown that it does not provide user anonymity, and the capability to resist user and server impersonation attacks. In this paper, we analyze and explore the security limitations of Zhang et al. [19] and Sureshkumar et al. [26]. Our proposed security analysis is also applicable to the most of existing schemes in the literature, particularly we consider the related existing SIPs in the literature proposed by Lu et al. [20], Tu et al. [21], Farash [7], Chaudhry et al. [22], and Lu et al. [23]. We then propose a possible improvement to withstand the drawback find in the existing schemes, and discuss the future work.

In the following, we describe the security drawbacks of Sureshkumar et al.’s proposed scheme. Assume that an adversary captures all the transmitted messages between user U and server S via a public channel. The list of transcripts of each session are {m1,m2,m3}, where m1={Ru,Du,Authu,tu}, m2={Rs,Auths,ts}, and m3={Conf}. Now we assume that the adversary launch session exposure attacks and get the session random secret ru∈Z∗q [12]. The adversary A computes the user credentials IDu and pwu as follows using the revealed session ephemeral ru of user U:

Next adversary A launch the off-line password guessing attack as follows:

Therefore, from the above analysis, it is clear that Sureshkumar et al.’s proposed SIP fails to provide the user credentials privacy when the session-ephemeral secrets unexpectedly revealed to the adversary.

We assume that an adversary captures all the transmitted messages between user U and server S via a public channel. The captured messages are {m1,m2,m3}, where m1={HIDu,Ru} , M2={realm,Rs,Auths}, and m3={realm,Authu}. As defined, suppose the session ephemeral secret ru∈Z∗q unexpectedly revealed to the adversary by the session exposure attacks [12]. Then the adversary A can compute the user credentials as follows:

From the above analysis, it is clear that Zhang et al.’s scheme fails to protect the user secret credentials (IDu,pwu) when the session ephemeral secrets revealed to the adversary.

In this section, we propose an improvement over the Sureshkumar et al.’s scheme [26]. Our small modification in the storing parameters in the server database and small variation in the login request message, make the enhanced protocol is secure against the defined adversary. Our improved also have three phases, namely initialization, registration and authentication phases. The registration phase is same as in Sureshkumar et al.’s scheme [26], and the other phases are presented below.

In our improved version of the protocol, we updated the server database table as h(HIPu||1) : {UPWu,au} for user U. We then modified the request message as m1={Ru,DPu,Authu,tu}. In our scheme, we are sending DPu=HIPu⊕h(Ku) instead of sending Du=HIDu⊕h(Ku) in the Sureshkumar et al.’s scheme [26]. In our case, even if the session ephemeral secret revealed to an adversary A, he/she can only retrieve HIPu=h(IDu||pwu). Therefore, guessing both identity IDu and password pwu simultaneously makes hard to the adversary than guessing one-by-one individually the identity IDu and password pwu. Whereas, other protocols leave the option of guessing individually the identity and the password. Therefore, our improved version provides strong credential privacy even in the case of ephemeral leakage without increasing the computational overheads over the Sureshkumar et al.’s protocol [26] and Zhang et al.’s protocol [19].

In this section, we discuss the performance comparison as well as the security features satisfied by various related schemes in the literature.

In Table 2, we compare the computational overheads required in various existing protocols as well as our improved version of the protocol. To analyze the computational cost, we use the notations for different cryptographic operations as follows: Tpm : ECC point multiplication and Th

: cryptographic hash function, and we omit the other lightweight operation such as symmetric-key encryption/decryption and bitwise exclusive-OR operations in our comparison. In order to estimate the approximate execution timings, we use the experimental results presented in He et al.’s work

[27]. The approximate execution timings are Tpm ≈ 0.0171sec and Th ≈ 0.00032sec. From the Table 2, it is clear that our proposed improvement requires little lesser computational cost compared to the original Sureshkumar et al.’s protocol [26], and our improvement is also comparable with the other existing protocols.

We have first analyzed the security limitations of the recently proposed Sureshkumar et al. and Zhang et al.’s session initiation protocols. We have shown that both the schemes fail to protect the user secret credentials (identity and password) when the session ephemeral secrets are unexpectedly revealed to an adversary by the session exposure attacks. The presented security analysis in this paper is also applicable to most of the existing schemes in the literature. We then discuss the possible improvement to overcome the pitfalls find the existing schemes. In addition, we present the security and performance comparisons of the related existing schemes in the literature and compare with the proposed enhanced scheme. In our observation, the further study is required in this area of research to design secure and efficient session initiation protocols for quality healthcare services. In the future work, we aim to explore novel privacy preserving approaches for session initiation protocol, particular to the emergency healthcare application.