Recent studies on the adversarial vulnerability of neural networks have shown that models trained with the objective of minimizing an upper bound on the worst-case loss over all possible adversarial perturbations improve robustness against adversarial attacks. Beside exploiting adversarial training framework, we show that by enforcing a Deep Neural Network (DNN) to be linear in transformed input and feature space improves robustness significantly. We also demonstrate that by augmenting the objective function with Local Lipschitz regularizer boost robustness of the model further. Our method outperforms most sophisticated adversarial training methods and achieves state of the art adversarial accuracy on MNIST, CIFAR10 and SVHN dataset. In this paper, we also propose a novel adversarial image generation method by leveraging Inverse Representation Learning and Linearity aspect of an adversarially trained deep neural network classifier. 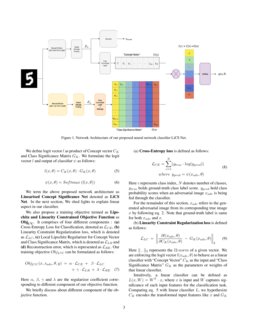 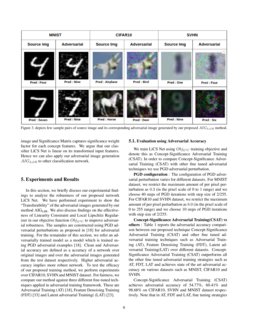 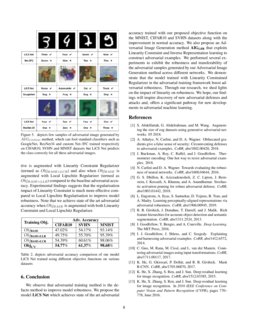 Despite the successes of deep learning

in wide ranges of computer vision tasks such as image classification

[13, 15], object detection [7, 22], semantic segmentation [11] etc., it is well known that neural networks are not robust. In particular, it has been shown that the addition of small but carefully crafted human imperceptible deviations to the input, called adversarial perturbations, can cause the neural network to make incorrect predictions with high confidence [4, 9, 16, 27]. The existence of adversarial examples pose a severe security threat to the practical deployment of deep learning models, particularly in safety critical systems, such as autonomous driving [24], healthcare [1] etc.

Starting with the seminal work [27], there has been extensive work in the area of crafting new adversarial perturbations. These work can be broadly classified in two categories: (i) finding strategies to defend against adversarial inputs [9, 29, 18]; (ii) new attack methods that are stronger and can break the proposed defense mechanism [18, 20].

Most of the defense strategies proposed in the literature are targeted towards a specific adversary, and as such they are easily broken by stronger adversaries [30, 2]. [18] proposed robust optimization technique, which overcome this problem by finding the worst case adversarial examples at each training step and adding them to the training data. While the resulting models show strong empirical evidence that they are robust against many attacks, we cannot yet guarantee that a different adversary cannot find inputs that cause the model to predict incorrectly. In fact, [28] observed a phenomenon that motivates why Projected Gradient Descent (PGD) - the technique at the core of Madry et al.’s method - does not always find the worst-case attack. This finding initiates the desideratum to explore more efficient strategy to enforce on the model for improving Robustness, beside exploiting adversarial training framework as developed by [18].

We list the main contributions of our work below :

The goal of an adversarial attack is to find out minimum perturbation δ in the input space x (i.e. input pixels for an image) that results in the change of class prediction by the network ψ. Mathematically, we can write this as follows:

The magnitude of adversarial perturbation is constrained by a p-norm where p-norm∈{0,2,∞} to ensure that the adversarially perturbed example xadv is close to the original sample. Below, we pose this as an optimization problem:

In general, there are mainly two types of adversarial attacks, white box and black box attacks. In white box attack, adversary has complete knowledge of the network and its parameters. While in Black box attack there is no information available about network architecture or parameters. Numerous works have been proposed to defend against such adversarial attacks. [3, 17, 10, 5, 21, 32, 25] showed different defense strategies to improve the robustness of deep neural networks. Unfortunately, [2] find that all these defense policies use obfuscated gradients, a kind of gradient masking, that leads to false sense of security in defense against adversarial examples and provides a limited improvement in robustness. [2] also observes Adversarial training is the only defense which significantly increases robustness to adversarial examples within the threat model.

, which forms the logit vector

Here “Concept Vector” CK∈RM, where M represents the number of different concepts, we want to capture from underlying data distribution.

We term the above proposed network architecture as Linearised Concept Significance Net denoted as LiCS Net. In the next section, We shed lights to explain linear aspect in our classifier.

We also propose a training objective termed as Lipschitz and Linearity Constrained Objective Function as ObjL2C. It comprises of four different components : (a) Cross-Entropy Loss for Classification, denoted as LCE, (b) Linearity Constraint Regularization loss, which is denoted as LLC, (c) Local Lipschitz Regularizer for Concept Vector and Class Significance Matrix, which is denoted as LLR and (d) Reconstruction error, which is represented as LRE. Our training objective ObjL2C can be formulated as follows:

Here α, β, γ and λ are the regularizer coefficient corresponding to different component of our objective function.

We briefly discuss about different component of the objective function.

(a) Cross-Entropy loss is defined as follows:

For the remainder of this section, xadv refers to the generated adversarial image from its corresponding true image x by following eq. 2. Note that ground-truth label is same for both xadv and x.

(b) Linearity Constraint Regularization loss is defined as follows:

Here ||.||2 represents the l2-norm of a given vector. We are enforcing the logit vector l(xadv,θ) to behave as a linear classifier with “Concept Vector” CK as the input and “Class Significance Matrix” GK as the parameters or weights of that linear classifier.

(c) Local Lipschitz Regularizer for Concept Vector and Class Significance Matrix is defined based on the concept of “Lipschitz constant”. Let’s assume a function ϕ(x) having Lipschitz Constant value of LΦ. Below equation holds true for all Δ.

Hence, we argue that a lower Lipschitz constant ensures that the function’s output for its corresponding perturbed input is not significantly different and it can be used to improve the adversarial robustness of a classifier.

Here LsubC and LsubG are the Lipschitz constant of the sub network Concept branch and Significance branch respectively.

To achieve a robust classifier, we aim to improve robustness of its sub-networks using Local Lipschitz Regularizer for Concept Vector and Class Significance Matrix, which is formulated as follows:

Note that, we enforce invariability of Concept vector CK and Class Significance matrix GK to the model for an original image x and its corresponding adversarial image xadv through Local Lipschitz Regularizer.

where x is the input image and xrecons is the reconstructed image at last up-convolution layer of the Concept branch of our network.

In this section, we propose adversarial image generation method which consists of two iterative steps stated as follows: (i) Find minimum perturbation of Concept Vector C(x,θ) which guarantees to fool the classifier by exploiting “linearity” aspect of the classifier. (ii) Using the perturbed concept vector from step (i), generate an equivalent perturbation in image space (i.e. image pixels) by leveraging inverse representation which fools the classifier.

We elaborate above steps of adversarial image generation method below:

Step (i): We represent the i-th component of logit vector defined in eq. 5 as:

Here GiK(x,θ) is the i-th column of Class Significance Matrix which encodes the significance weight factor of concepts for the i-th class.

Let 's assume for a given image x0, the network produces a Concept Vector CK, and the ground truth class label corresponding to image x0 is ~i. Now, the minimum perturbation (δ) required in Concept Vector to fool the classifier can be formulated as follows:

In the above relation, “i” represents the class index and i≠~i must satisfy. Now, we can re-arrange and write above equation as follows:

As shown in Fig. 2, Concept vector is represented as a point in M dimensional concept space. We decide to perturb the Concept vector CK(x0,θ) towards the linear decision boundary of a target class it, which satisfy the following relation:

We have used “Inverse Representation” [19, 31, 6] method to generate adversarial image xperturbadv which corresponds to the final Perturbed Concept vector CperturbK(x0,θ), starting from the true input image x0 and its corresponding Concept vector CK(x0,θ). We can pose this method as an optimization problem detailed in Algorithm 1.

We term above proposed algorithm as Adversarial Image Generation using Linearity and Inverse Representation as AIGLiIR.

Moreover with evident results provided in next section, we claim that our adversarial image generation method AIGLiIR is very effective in fooling various deep neural network designed for classification task.

Ψ as: Ψ(x,θ)=g(f(x)). Here, f(x) act as the transformation applied on input by sub network of Ψ which comprises of all the layers upto penultimate layer and g act as the significance factor applied by last fully connected layer, to each transformed features from f(x).

We observe that f and g are analogous to Concept vector and Significance Matrix of our network LiCS Net such that Concept vector encodes the transformed features of input image and Significance Matrix captures significance weight factor for each concept features. We argue that our classifier LiCS Net is linear on its transformed input features. Hence we can also apply our adversarial image generation AIGLiIR to other classification network.

In this section, we briefly discuss our experimental findings to analyze the robustness of our proposed network LiCS Net. We have performed experiment to show the “Transferability” of the adversarial images generated by our method AIGLiIR. We also discuss findings on the effectiveness of Linearity Constraint and Local Lipschitz Regularizer in our objective function ObjL2C to improve adversarial robustness. The samples are constructed using PGD adversarial perturbations as proposed in [18] for adversarial training. For the remainder of this section, we refer an adversarially trained model as a model which is trained using PGD adversarial examples [18]. Clean and Adversarial accuracy are defined as a accuracy of a network over original images and over the adversarial images generated from the test dataset respectively. Higher adversarial accuracy implies more robust network. To test the efficacy of our proposed training method, we perform experiments over CIFAR10, SVHN and MNIST dataset. For fairness, we compare our method against three different fine-tuned techniques applied in adversarial training framework. These are Adversarial Training (AT) [18], Feature Denoising Training (FDT) [33] and Latent adversarial Training( (LAT) [23].

Concept-Significance Adversarial Training (CSAT) achieves adversarial accuracy of 54.77%, 60.41% and 98.68% on CIFAR10, SVHN and MNIST dataset respectively. Note that in AT, FDT and LAT, fine tuning strategies are being performed over Wide ResNet based (WRN 32-10 wide) architecture [34] in the case of CIFAR10 and SVHN dataset. We use the same network configuration for all the different datasets. Note that we choose dimension of concept vector as 10 and the dimension of class significance matrix as 10×10. To train our model we use adam optimizer [14] with the learning rate of 0.0002.

We evaluate adversarial accuracy of different standard pre-trained models such as GoogleNet [26] (trained on CIFAR10), ResNet34 [12] (trained on SVHN) and custom Net-3FC (trained on MNIST) on adversarial samples generated using AIGLiIR and AIGCSPGD

method and compare with their respective clean test accuracy. Note that custom Net-3FC consists of 3 fully connected layers along with Relu activation and softmax function.

These experimental finding suggests adversarial samples generated using AIGLiIR act as a better adversary to various network architectures such as GoogleNet, Resnet34 and custom Net-3FC which shows the “transferability” of these adversarial samples. Our adversarial image generation method AIGLiIR can also be used for black box attack to other classification networks due to its robustness and transferability.

Architecture : We have used our proposed network LiCS Net for ablation experiments on our objective function as stated in eq. 7

. We kept all the hyperparameters same for different experiments of ablation study. We evaluated adversarial accuracy of our network LiCS Net trained with base objective function (termed as

ObjBASE) which consists of cross-entropy and reconstruction loss and used it as our baseline adversarial accuracy for ablation study.

We observe that adversarial training method is the de-facto method to improve model robustness. We propose the model LiCS Net which achieves state of the art adversarial accuracy trained with our proposed objective function on the MNIST, CIFAR10 and SVHN datasets along with the improvement in normal accuracy. We also propose an Adversarial Image Generation method AIGLiIR