In this paper, we study a multi-user multiple-input-multiple-output secrecy simultaneous wireless information and power transfer (SWIPT) channel which consists of one transmitter, one cooperative jammer (CJ), multiple energy receivers (potential eavesdroppers, ERs), and multiple co-located receivers (CRs). We exploit the dual of artificial noise (AN) generation for facilitating efficient wireless energy transfer and secure transmission. Our aim is to maximize the minimum harvested energy among ERs and CRs subject to secrecy rate constraints for each CR and total transmit power constraint. By incorporating norm-bounded channel uncertainty model, we propose a iterative algorithm based on sequential parametric convex approximation to find a near-optimal solution. Finally, simulation results are presented to validate the performance of the proposed algorithm outperforms that of the conventional AN-aided scheme and CJ-aided scheme. 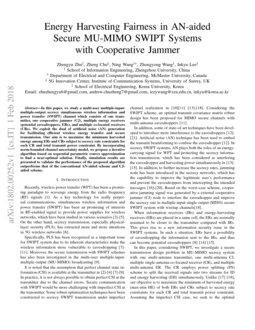 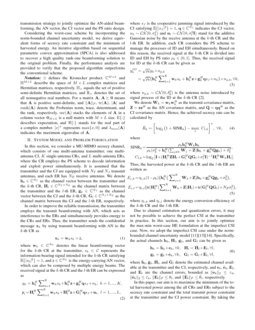 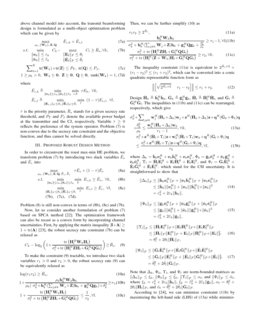 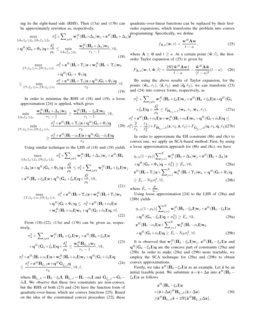 In this paper, an energy harvesting scheme for a multi-user multiple-inp...
Zhengyu Zhu, et al. ∙

Recently, wireless power transfer (WPT) has been a promising paradigm to scavenge energy from the radio frequency (RF) signals [1]. As a key technology for really perpetual communications, simultaneous wireless information and power transfer (SWIPT) has been an promising of interests in RF-enabled signal to provide power supplies for wireless networks, which have been studied in various scenarios [2]-[5]. On the other hand, secrecy transmission, especially physical-layer security (PLS), has extracted more and more attentions in 5G wireless networks [6].

Specifically, PLS has been recognized as a important issue for SWIPT system due to its inherent characteristics make the wireless information more vulnerable to eavesdropping [7]-[11]. Moreover, the secure transmission with SWIPT schemes has also been investigated in the multi-user multiple-input-multiple-output (MU-MIMO) broadcasting [9].

It is noted that the assumption that perfect channel state information (CSI) is available at the transmitter in [2]-[4] [7]-[9]. In practice, it is not always possible to obtain perfect CSI at the transmitter due to the channel errors. Secure communication with SWIPT would be more challenging with imperfect CSI at the transmitter. Some robust optimization techniques have been constructed to secrecy SWIPT transmission under imperfect channel realization in [10][11] [13]-[18]. Considering the SWIPT scheme, an optimal transmit covariance matrix robust design has been proposed for MIMO secure channels with multi-antenna eavesdroppers [11].

In addition, some of state-of-art techniques have been developed to introduce more interference to the eavesdroppers [12]-[21]. Artificial noise (AN) technique has been used to embed the transmit beamforming to confuse the eavesdropper [12]. In secrecy SWIPT systems, AN plays both the roles of an energy-carrying signal for WPT and protecting the secrecy information transmission, which has been considered as interfering the eavesdropper and harvesting power simultaneously in [13]-[15]. In addition, to further increase the secrecy rates, jamming node has been introduced in the secrecy networks, which has the capability to improve the legitimate user’s performance and prevent the eavesdroppers from intercepting the intended messages [16]-[20]. Based on the worst-case scheme, cooperative jamming signal was generated by a external cooperative jammer (CJ) node to interfere the eavesdropper and improve the secrecy rate in multiple-input-single-output (MISO) secure SWIPT system with wiretap channels[18].

When information receivers (IRs) and energy-harvesting receivers (ERs) are placed in a same cell, the ERs are normally assumed to be closer to the transmitter compared with IRs. This gives rise to a new information security issue in the SWIPT systems. In such a situation, ERs have a possibility of eavesdropping the information sent to the IRs, and thus can become potential eavesdroppers [8] [14] [15].

, our objective is to maximize the minimum of harvested energy (max-min HE) of both ERs and CRs subject to secrecy rate constraints for each CR and total transmit power constraint. Assuming the imperfect CSI case, we seek to the optimal transmission strategy to jointly optimize the AN-aided beamforming, the AN vector, the CJ vector and the PS ratio design.

Considering the worst-case scheme by incorporating the norm-bounded channel uncertainty model, we derive equivalent forms of secrecy rate constraint and the minimum of harvested energy. An iterative algorithm based on sequential parametric convex approximation (SPCA) is also addressed to recover a high quality rank-one beamforming solution to the original problem. Finally, the performance analysis are provided to verify that the proposed algorithm outperforms the conventional scheme.

Notation: ⊗ defines the Kronecker product. CM×L and HM×L describe the space of M×L complex matrices and Hermitian matrices, respectively. H+ equals the set of positive semi-definite Hermitian matrices, and R+ denotes the set of all nonnegative real numbers. For a matrix A, A⪰0 means that A is positive semi-definite, and ∥A∥F, tr(A), |A| and rank(A) denote the Frobenius norm, trace, determinant, and the rank, respectively. \emphvec(A) stacks the elements of A in a column vector. 0M×L is a null matrix with M×L size. E{⋅} describes expectation, and R{⋅} stands for the real part of a complex number. [x]+ represents max{x,0} and λmax(A)

indicates the maximum eigenvalue of

where wk∈CNT denotes the linear beamforming vector for the k-th CR at the transmitter, sk∈C represents the information-bearing signal intended for the k-th CR satisfying E{|sk|2}=1, and \emph{z}∈CNT is the energy-carrying AN vector, which can also be composed by multiple energy beams. The received signal at the k-th CR and the l-th ER can be expressed as

where np,k∼CN(0,δ2k) is the antenna noise introduced by signal process of the ID at the k-th CR [2].

Thus, the harvested power at the k-th CR and the l-th ER are written as

where ηc,k and ηe,l denote the energy conversion efficiency of the k-th CR and the l-th ER.

where ¯hk,¯gk,¯Hl, and ¯Gl denote the estimated channel available at the transmitter and the CJ, respectively, and ek,~ek,El, and ~El are the channel errors, bounded as ∥ek∥2≤εk, ∥~ek∥2≤~εk, ∥El∥F≤θl, and ∥~El∥F≤~θl, respectively.

In this paper, our aim is to maximize the minimum of the total harvested power among the all CRs and ERs subject to the secrecy rate constraint and the total transmit power constraint at the transmitter and the CJ power constraint. By taking the above channel model into account, the transmit beamforming design is formulated as a multi-object optimization problem which can be given by

τ is the priority parameter, ¯Rs stands for a given secrecy rate threshold, and PT and PJ denote the available power budget at the transmitter and the CJ, respectively. Variable τ≥0 reflects the preference of the system operator. Problem (7) is non-convex due to the secrecy rate constraint and the objective function, and thus cannot be solved directly.

In order to circumvent the roust max-min HE problem, we transform problem (7) by introducing two slack variables ¯Es and ¯Ee into

Now, let us consider another formulation of problem (7) based on SPCA method [22]. The optimization framework can also be recast as a convex form by incorporating channel uncertainties. First, by applying the matrix inequality |I+A|≥1+tr(A) [23], the robust secrecy rate constraint (7b) can be relaxed as

To make the constraint (9) tractable, we introduce two slack variables r1>0 and r2>0, the robust secrecy rate (9) can be equivalently relaxed as

Then, we can be further simplify (10) as

The inequality constraint (11a) is equivalent to 2¯Rs+2+(r1−r2)2≤(r1+r2)2, which can be converted into a conic quadratic-representable function form as

where Δk=¯hkeHk+ek¯hHk+ekeHk, , Υl=¯HlEHl+El¯HHl+ElEHl, and . which stand for the CSI uncertainty. It is straightforward to show that

According to [24], we can minimize constraint (11b) by maximizing the left-hand side (LHS) of (13a) while minimizing its the right-hand side (RHS). Then (13a) and (13b) can be approximately rewritten as, respectively,

where ¯Hξs,k=¯Hk−ξkI, ^Hξe,l=^Hl−αlI and ^G~ξe,l=^Gl−~αlI. We observe that these two constraints are non-convex, but the RHS of both (23) and (24) have the function form of quadratic-over-linear, which are convex functions [25]. Based on the idea of the constrained convex procedure [22], these quadratic-over-linear functions can be replaced by their first-order expansions, which transforms the problem into convex programming. Specifically, we define

In order to approximate the EH constraint (8b) and (8c) to convex one, we apply an SCA-based method. First, by using a loose approximation approach for (8b) and (8c), we have

where (30) are derived by dropping the quadratic form ΔzH¯Hξs,kΔz.

Then, defining ~wk and ~q as initial feasible point. Substituting wk=~wk+Δwk,∀k, z=~z+Δz, and q=~q+Δq into the LHS of (29a) and (29b). Then, we can use the the similar method with (30) to achieve linear approximations of the concave constraints (29a) and (29b), respectively, as