This paper investigates the problem of resource allocation for a wireless communication network with distributed reconfigurable intelligent surfaces (RISs). In this network, multiple RISs are spatially distributed to serve wireless users and the energy efficiency of the network is maximized by dynamically controlling the on-off status of each RIS as well as optimizing the reflection coefficients matrix of the RISs. This problem is posed as a joint optimization problem of transmit beamforming and RIS control, whose goal is to maximize the energy efficiency under minimum rate constraints of the users. To solve this problem, two iterative algorithms are proposed for the single-user case and multi-user case. For the single-user case, the phase optimization problem is solved by using a successive convex approximation method, which admits a closed-form solution at each step. Moreover, the optimal RIS on-off status is obtained by using the dual method. For the multi-user case, a low-complexity greedy searching method is proposed to solve the RIS on-off optimization problem. Simulation results show that the proposed scheme achieves up to 33% and 68% gains in terms of the energy efficiency in both single-user and multi-user cases compared to the conventional RIS scheme and amplify-and-forward relay scheme, respectively. 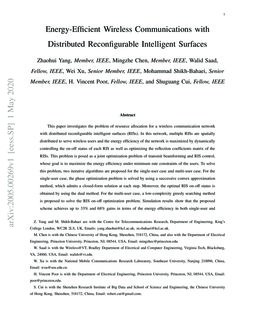 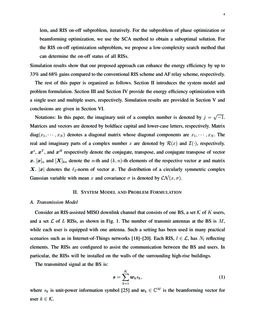 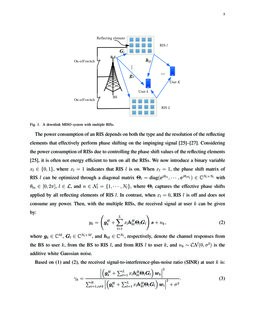 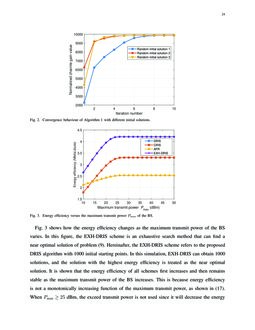 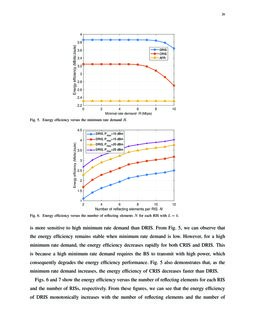 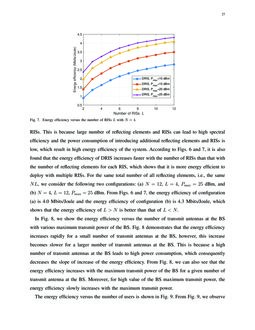 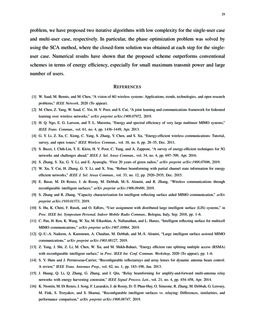 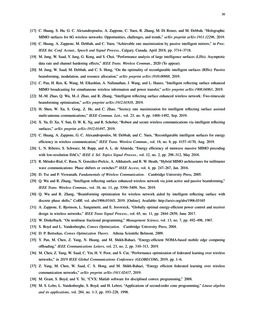 In this letter, the joint power control of D2D users and the passive bea...
Shuaiqi Jia, et al. ∙

Recently, reconfigurable intelligent surface (RIS)-assisted wireless communication has been proposed as a potential solution for enhancing the energy efficiency of wireless networks [8, 9, 10, 11, 12, 13]. An RIS is a meta-surface equipped with low-cost and passive elements that can be programmed to turn the wireless channel into a partially deterministic space. In RIS-assisted wireless communication networks, a base station (BS) sends control signals to an RIS controller so as to optimize the properties of incident waves and improve the communication quality of users. The RIS acts as a reflector and does not perform any digitalization operation. Hence, if properly deployed, an RIS promises much lower energy consumption than traditional amplify-and-forward (AF) relays [14, 15, 16]. However, the effective deployment of energy-efficient RIS systems faces several challenges ranging from performance characterization to network optimization [17].

, the downlink sum-rate of an RIS assisted wireless communication system was characterized. An asymptotic analysis of the uplink transmission rate in an RIS-based large antenna-array system was presented in

[19]. Then, in [20], the authors investigated the asymptotic optimality of the achievable rate in a downlink RIS system. Considering energy harvesting, an RIS was invoked for enhancing the sum-rate performance of a simultaneous wireless information and power transfer aided system [21]. Instead of considering the availability of instantaneous channel state information (CSI), the authors in [22] proposed a two-time-scale transmission protocol to maximize the achievable sum-rate for an RIS-assisted multi-user system. Taking the secrecy into consideration, the work in [23] investigated the problem of secrecy rate maximization of an RIS assisted multi-antenna system. Further by considering imperfect CSI, the RIS was considered to enhance the physical layer security of a wireless channel in [24]. Beyond the above studies, the use of RISs for enhanced wireless energy efficiency has been studied in [25]. In [25], the authors proposed a new approach to maximize the energy efficiency of a multi-user multiple-input single-output (MISO) system by jointly controlling the transmit power of the BS and the phase shifts of the RIS. However, only a single RIS was considered for simplicity in [25]. Deploying a number of low-cost power-efficient RISs in future networks can cooperatively enhance the coverage of the networks. In particular, deploying multiple RISs in wireless networks has several advantages. First, distributed RISs can provide robust data-transmission since different RISs can be deployed geometrically apart from each other. Meanwhile, multiple RISs can provide multiple paths of received signals, which increases the received signal strength. To our best knowledge, this is the first work that optimizes the energy efficiency for a wireless network with multiple RISs.

The main contribution of this paper is a novel energy efficient resource allocation scheme for wireless communication networks with distributed RISs. Our key contributions include:

Simulation results show that our proposed approach can enhance the energy efficiency by up to 33% and 68% gains compared to the conventional RIS scheme and AF relay scheme, respectively.

The rest of this paper is organized as follows. Section II introduces the system model and problem formulation. Section III and Section IV provide the energy efficiency optimization with a single user and multiple users, respectively. Simulation results are provided in Section V and conclusions are given in Section VI.

Notations: In this paper, the imaginary unit of a complex number is denoted by j=√−1. Matrices and vectors are denoted by boldface capital and lower-case letters, respectively. Matrix diag(x1,⋯,xN) denotes a diagonal matrix whose diagonal components are x1,⋯,xN. The real and imaginary parts of a complex number x are denoted by R(x) and I(⋅), respectively. x∗, xT, and xH respectively denote the conjugate, transpose, and conjugate transpose of vector x. [x]n and [X]kn denote the n-th and (k,n)-th elements of the respective vector x and matrix X. |x| denotes the ℓ2-norm of vector x. The distribution of a circularly symmetric complex Gaussian variable with mean x and covariance σ is denoted by CN(x,σ).

Consider an RIS-assisted MISO downlink channel that consists of one BS, a set K of K users, and a set L of L RISs, as shown in Fig. 1. The number of transmit antennas at the BS is M, while each user is equipped with one antenna. Such a setting has been used in many practical scenarios such as in Internet-of-Things networks [18, 19, 20]. Each RIS, l∈L, has Nl reflecting elements. The RISs are configured to assist the communication between the BS and users. In particular, the RISs will be installed on the walls of the surrounding high-rise buildings.

The transmitted signal at the BS is:

where sk is unit-power information symbol [25] and wk∈CM is the beamforming vector for user k∈K.

, it is often not energy efficient to turn on all the RISs. We now introduce a binary variable

xl∈{0,1}, where xl=1 indicates that RIS l is on. When xl=1, the phase shift matrix of RIS l can be optimized through a diagonal matrix Θl=diag(ejθl1,⋯,ejθlNl)∈CNl×Nl with θln∈[0,2π], l∈L, and n∈Nl={1,⋯,Nl}, where Θl captures the effective phase shifts applied by all reflecting elements of RIS l. In contrast, when xl=0, RIS l is off and does not consume any power. Then, with the multiple RISs, the received signal at user k can be given by:

Based on (1) and (2), the received signal-to-interference-plus-noise ratio (SINR) at user k is:

As a result, the sum-rate of all users is:

where B is the bandwidth of the channel.

Given the considered system model, our objective is to jointly optimize the reflection coefficients matrix, beamforming vector, and RIS on-off vector so as to maximize the energy efficiency under the minimum rate requirements and total power constraint. Mathematically, the problem for the distributed RISs can be given by:

where θ=[θ11,⋯,θ1N1,⋯,θLNL]T, w=[w1;⋯;wK], x=[x1,⋯,xL]T, Rk is the minimum data rate requirement of user k, and Pmax is the maximum transmit power of the BS. The minimum rate constraint for each user is given in (6a) and (6b) represents the total power constraint. The phase shift constraint for each reflecting element is provided in (6c), which can also be seen as the unit-modulus constraint since |ejθln|=1. The problem in (6) is a mixed-integer nonlinear program (MINLP) even for the single-user case with K=1. It is generally difficult to obtain the globally optimal solution of the MINLP problem in (6). In the following, we propose two iterative algorithms to obtain suboptimal solutions of problem (6) for the single-user case and the multi-user case, respectively.

Since there is no multi-user interference, it is well-known that beaming as the the maximum ratio transmission (MRT) at the BS is optimal [28]. That is:

where p1≤Pmax helps satisfy the transmit power constraint at the BS. Substituting the optimal beamforming in (8) into problem (7), it becomes:

Due to the involvement of integer variable x, it is difficult to obtain the globally optimal solution of (9). As such, we propose an iterative algorithm to solve problem (9) sub-optimally with low complexity. The proposed iterative algorithm contains two major steps. In the first step, we jointly optimize phase and power (θ,p1) with given x. Then, in the second step, we update RIS on-off vector x with the optimized (θ,p1) in the previous step.

From the objective function (10) and the constraint in (10a), we observe that the optimal θ is the one that maximizes the channel gain, i.e., ∣∣(gH1+∑Ll=1xlhH1lΘlGl)∣∣2. With this in mind, the optimal solution of problem (10) can be obtained in two stages, i.e., obtain the value of θ that maximizes ∣∣(gH1+∑Ll=1xlhH1lΘlGl)∣∣2 in the first stage and, then, calculate the optimal p1 in the second stage with the obtained θ in the first stage.

We first optimize the phase shift vector θ of problem (10). Before optimizing θ, we show that hH1lΘlGl=θTlU1l, where U1l=diag(hH1l)Gl∈CNl×M and θl=[ejθl1,⋯,ejθlNl]T. According to problem (10), the optimal θ can be calculated by solving the following problem:

To solve the optimization problem in (12), various methods were proposed by techniques such as semidefinite relaxation (SDR) technique [29] and successive refinement (SR) algorithm [30]. However, the SDR method imposes high complexity to obtain a rank-one solution and the SR algorithm requires a large number of iterations due to the need for updating the phase shifts in a one-by-one manner. To reduce the computational complexity, we propose the SCA method to solve the phase shift optimization problem (12).

which is the first-order Taylor series of ∣∣g1+UH1v∣∣2 and the superscript (n−1) represents the value of the variable at the (n−1)-th iteration.

where constraint (12a) is temporarily relaxed as (14a). In the following lemma, we show that (14a) always holds with equality for the optimal solution of problem (14).

The optimal solution of problem (14) is:

The SCA algorithm for solving problem (12) is summarized in Algorithm 1. The convergence of Algorithm 1 is guaranteed by the following lemma that follows directly from [31, Proposition 3]:

The objective value (12) obtained in Algorithm 1 is monotonically non-decreasing and the sequence v(n) converges to a point fulfilling the Karush-Kuhn-Tucker (KKT) optimal conditions of the original nonconvex problem (12).

Lemma 2 shows that Algorithm 1 will always converge to a locally optimal solution of problem (12).

We now obtain the optimal power allocation p1. With the obtained θ in Algorithm 1 and defining ¯g1=∣∣gH1+∑Ll=1xlhH1lΘlGl∣∣2σ2, problem (10) reduces to:

For the energy efficiency optimization problem (16), the Dinkelbach method from [32] can be used. The Dinkelbach method involves solving a series of convex subproblems, which increases the computational complexity. However, the optimal solution of (16) can be derived in closed form using the following theorem.

The optimal transmit power of the energy efficiency maximization problem in (16) is:

Proof: The first-order derivative of the objective function (16) with respect to power p1 is:

To show the increasing trend of the objective function (16), we further denote:

The first-order derivative of function f1(p1) is:

We introduce an auxiliary variable y and problem (22) is equivalent to:

To handle the first difficulty, we use the parametric approach in [32] and consider the following problem:

where F is the feasible set of (x,y) satisfying constraints (23a)-(23c). It was proved in [32] that solving (23) is equivalent to finding the root of the nonlinear function H(λ), which can be obtained by using the Dinkelbach method. By introducing parameter λ, the objective function of problem (23) can be simplified, as shown in (24).

To handle the second difficulty, due to the fact that xl∈{0,1}, we can rewrite the right hand side of constraint (23a) as:

For problem (28), the optimal RIS on-off vector x and auxiliary variables (y,z) can be respectively expressed as:

{α,κ1lm,κ2lm,κ3lm} are the Lagrange multipliers associated with corresponding constraints of problem (28), and ab=max{a,b}.

Proof: The dual problem of problem (28) with relaxed constraints is:

To maximize the objective function in (34), which is a linear combination of xl and zlm, we must let the positive coefficients corresponding to the xl and zlm be 1. Therefore, the optimal xl and zlm are thus given as (29) and (31), respectively.

To optimize y from (34), we set the first derivative of objective function to zero, i.e.,