Endmember Extraction on the Grassmannian

Endmember extraction plays a prominent role in a variety of data analysis problems as endmembers often correspond to data representing the purest or best representative of some feature. Identifying endmembers then can be useful for further identification and classification tasks. In settings with high-dimensional data, such as hyperspectral imagery, it can be useful to consider endmembers that are subspaces as they are capable of capturing a wider range of variations of a signature. The endmember extraction problem in this setting thus translates to finding the vertices of the convex hull of a set of points on a Grassmannian. In the presence of noise, it can be less clear whether a point should be considered a vertex. In this paper, we propose an algorithm to extract endmembers on a Grassmannian, identify subspaces of interest that lie near the boundary of a convex hull, and demonstrate the use of the algorithm on a synthetic example and on the 220 spectral band AVIRIS Indian Pines hyperspectral image. 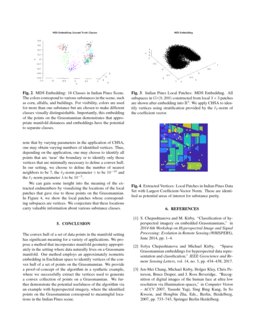 There is increasing evidence that for certain types of high-dimensional data, particularly when the data contains samples of similar objects in a variety of state, it is advantageous to work with subspaces of the ambient data space rather than individual points. Examples of this include improved classification of signals in hyperspectral images [1, 2] and identification of ultra-low resolution grayscale face images via illumination spaces [3]. In these examples, the underlying geometric framework is that of Grassmann manifolds. The real Grassmann manifold Gr(k,n) is a topological manifold whose points parameterize all possible k-dimensional subspaces of Rn. There are many distinct ways to impose a geometric structure on Gr(k,n). The most commonly used include geometries imposed by the geodesic, chordal, and Fubini-Study metrics. Each of these geometries has its own distinct characteristics and its own distinct advantages and disadvantages. Although the geometry of the Grassmannian, with respect to each of these various metrics, is well understood from a theoretical perspective, many of the standard methods for studying data in Euclidean space do not yet have analogues on the Grassmannian. In this paper we will describe a method for computing endmembers and other points of interest within a collection of points on the Grassmann manifold Gr(k,n).

Given a set of data points X in Rn, one can consider the convex hull C of X, which is defined as the smallest convex set containing X. If X is finite then C will be a convex polytope and one can ask for the vertices x1,x2,…,xℓ of this polytope. The vertices x1,x2,…,xℓ are sometimes known as endmembers. Interest in endmembers stems from their relationship to extrema of linear functionals on X and thus endmember identification exposes extremal elements in X. Note that for any datapoint y lying in the convex hull of X we can express y as a convex combination of its endmembers, i.e. there exists an expression

where wi≥0 and w1+⋯+wℓ=1. Thus, in some sense, the endmembers of X represent the most novel signals in X and every other point in X can be recognized as a convex combination of these fundamental elements. The coefficients w1,w2,…,wℓ are known as the fractional abundances of x1,…,xℓ in y. The determination of endmembers of a hyperspectral image is a particularly well-studied problem which is a key step of the more general problem of decomposing each pixel into its pure signals, also known as the spectral unmixing problem [4]. There are a significant number of algorithms for endmember extraction. These include the pixel purity index (PPI) [5], N-FINDR [6], optical real-time adaptive spectral identification system (ORASIS) [7], iterative error analysis (IEA) [8], convex cone analysis (CCA) [9], vertex component analysis [10], orthogonal subspace projection (OSP) technique [11], automated morphological endmember extraction (AMEE) [12], and simulated annealing algorithm (SAA) [13]. We note in particular that the algorithm presented in this paper can be seen to address some of the same challenges that the SAA algorithm recognizes; namely those of endmember variability.

While the algorithm described in this paper might be accurately described as non-linear endmember extraction, the framework is different from other established methods falling under this designation [14]. Motivating the latter is the observation that under certain circumstances, the spectral interactions between endmembers in hyperspectral images can be non-linear. In other words, the data is sometimes better modeled as living on a non-linear submanifold (unknown before-hand) which is embedded in Rn. In our case, the non-linearity arises from the fact that we take subspaces of Rn rather than single points. We consider these as points on a Grassmannian, thus giving rise to an immediate non-linear framework (irrespective of the particularities of the data).

We design our endmember extraction algorithm around the exploitation of an isometric embedding of a Grassmannian manifold into Euclidean space followed by a projection into a lower dimensional Euclidean space. Once in this setting, we can utilize known algorithms for discovering vertices of a convex hull. Consider a set of points X={xi}i∈I on the Grassmannian Gr(k,n). We define vertices of the convex hull of X on Gr(k,n) to be those points in X with indices I′⊂I obtained in the following way.

Multidimensional scaling provides a means of defining a collection of points in Euclidean space whose pairwise distances are as faithful as possible to their original distances on some manifold. See [17, 18, 19, 20, 21, 22] for full details. The procedure is described briefly below. Given a p×p distance matrix D, compute matrices A and B, where Aij=−12D2ij, and B is the result of double-centering A. That is, if H=Ip−1p11T, then B=HAH.

The MDS embedding is provided via the eigenvectors and eigenvalues of

B. Specifically, if VΛV−1 is the eigendecomposition of B, then the rows of the matrix E=[√λ1v1√λ2v2⋯√λqvq] give a collection of p points in Rq whose pairwise distances come as close as possible to D provided each λ1,…,λq>0.

x in the data set:

subject to ∑j∈Nwj=1, where the set {xj}j∈N is the set of N nearest neighbors to x in the data set. Those vectors x with an associated vector w for which at least one component of w is less than zero necessarily contain the vertices of the convex hull. Additionally, a measure of boundary-proximity is provided by the ℓ2-norm of the associated vectors w.

To summarize, our algorithm exploits an isometric embedding of the Grassmannian into Euclidean space, where well-known convex hull algorithms may be applied. Thus it is computationally manageable and serves as a useful technique in applied settings where a “pure representative” for a feature may be better represented as a span of several realizations of the “pure representative.”

The computational complexity of the Grassmann Endmember Extraction Algorithm is dominated by the complexity of MDS and CHSA as well as that of constructing a distance matrix for points on Gr(k,n). Classical MDS is known to be O(n3) but faster versions exist (see, e.g. [25]). For details on the complexity of CHSA, see [23]. A chordal distance matrix can be computed in polynomial time. Combining these three complexities, we conclude that the Grassmann Endmember Extraction Algorithm is a polynomial time algorithm.

, a Singular Value Decomposition (SVD) based algorithm can be used to compute a weighted flag mean of the set of

of orthonormal vectors (defined only up to sign where

l is the dimension of the span of all of the Ai considered together). From the ui one can construct a full flag of nested vector spaces V1⊂V2⊂⋯⊂Vl by defining Vi=span{u1,u2,…,ui}.

If we restrict A1,A2,…,Ar to all have the same dimension k then for each choice of weights we can consider the k-dimensional component of the flag Vk. In this manner, we can think of Vk, as determined by the weighted flag mean, as representing a kind of convex combination of the Ai as points on the Grassmann manifold Gr(k,n).

In the following example, we consider 3 random points A1,A2,A3∈Gr(3,10); then we determine 4997 random weighted flag means of these points, for a total of 5000 points. We use Grassmann endmember extraction to recover the three 3-dimensional subspaces of R10 that were used to construct the data set.

In Figure 1, we show the results of the MDS mapping of the set of points on Gr(3,10) described above to its best 3-dimensional space. Note that the mapping appears to faithfully represent the geometry and distance relationships present in the original points on the Grassmannian.

After applying our algorithm to this data set, we threshold by the norm of the weight vector and display those points that are thus identified as endmembers on the Grassmannian (Figure 1). The algorithm successfully identified the vertices that generated the data set, providing a proof of concept of the algorithm.

We apply our algorithm to the Indian Pines data set and present a visualization of the extracted endmembers in that context.

The Indian Pines data set consists of 220 spectral bands at a resolution of 145×145 pixels. We use a corrected data set that has bands from the region of water absorption removed, resulting in 200 remaining spectral bands.111The data is available at http://www.ehu.eus/ccwintco/index.php/ Hyperspectral_Remote_Sensing_Scenes. The data was collected with an Airborne Visible/Infrared Imaging Spectrometer (AVIRIS) at the Indian Pines test site in Indiana [27]. The scene contains various classes, such as woods, grass, corn, alfalfa, and buildings.

We begin by obtaining points on the Grassmannian by collecting local patches of spectral data. We choose to take regions of size 3×3 pixels. The span of the 9 vectors in a fixed region determine a point in Gr(9,200). Define this set to be L⊂Gr(9,200). We compute pairwise chordal distances between elements of L on Gr(9,200) and define a distance matrix D. The corresponding MDS embedding into R3 is shown in Figure 3.

For comparison, consider the embedding shown in Figure 2. Here, we define points on Gr(9,200) by taking spectral information from random collections of pixel locations, where each draw is made without replacement from a set of pixels that has been manually identified to consist of a particular class (e.g. corn, alfalfa). Call this set C. In Figure 2, an effort has been made to color embedded points by class in such a way that the classes are visually distinguishable. Notably, points within the same class tend to cluster together. Thus, it is reasonable to expect that endmembers extracted from the embedding of spectral information from local patches are likely to correspond to pure forms of various classes.

In Figure 3, we show the embedding of L into R3. We note that by varying parameters in the application of CHSA, one may obtain varying numbers of identified vertices. Thus, depending on the application, one may choose to identify all points that are ‘near’ the boundary or to identify only those vertices that are minimally necessary to define a convex hull. In our setting, we choose to define the number of nearest neighbors to be 7, the ℓ2-norm parameter γ to be 10−10 and the ℓ1-norm parameter λ to be 10−5.

We can gain some insight into the meaning of the extracted endmembers by visualizing the locations of the local patches that gave rise to those points on the Grassmannian. In Figure 4, we show the local patches whose corresponding subspaces are vertices. We conjecture that these locations carry valuable information about various substance classes.

The convex hull of a set of data points in the manifold setting has significant meaning for a variety of applications. We propose a method that incorporates manifold geometry appropriately in the setting where data naturally lives on a Grassmann manifold. Our method employs an approximately isometric embedding in Euclidean space to identify vertices of the convex hull of a set of points on the Grassmannian. We provide a proof-of-concept of the algorithm in a synthetic example, where we successfully extract the vertices used to generate a convex collection of points on a Grassmannian. We further demonstrate the potential usefulness of the algorithm via an example with hyperspectral imagery, where the identified points on the Grassmannian correspond to meaningful locations in the Indian Pines scene.