Traditional pedestrian collision warning systems sometimes raise alarms even when there is no danger (e.g., when all pedestrians are walking on the sidewalk). These false alarms can make it difficult for drivers to concentrate on their driving. In this paper, we propose a novel framework for an end-to-end pedestrian collision warning system based on a convolutional neural network. Semantic segmentation information is used to train the convolutional neural network and two loss functions, such as cross entropy and Euclidean losses, are minimized. Finally, we demonstrate the effectiveness of our method in reducing false alarms and increasing warning accuracy compared to a traditional histogram of oriented gradients (HoG)-based system. 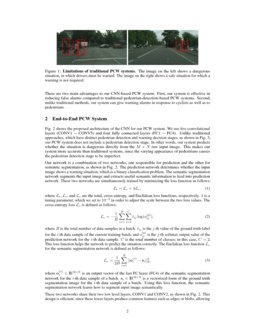 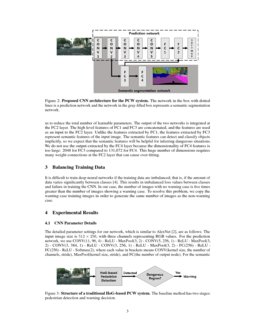 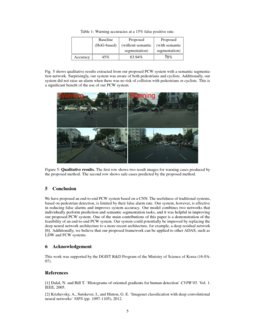 Drowsy driving is a major cause of on-road accidents in the US, which so...
Peetak Mitra, et al. ∙

Advanced driver assistance systems (ADAS) are important for the prevention of vehicle accidents. ADAS contain several components, such as forward collision warning (FCW), lane departure warning (LDW), and pedestrian collision warning (PCW) systems. The PCW system is especially helpful for preventing serious damage and casualties, and as a result, many researchers and developers have tried to improve this system [7]. PCW systems usually rely on pedestrian detection and have an unfortunate tendency to produce false alarms in safe situations.

For example, as shown in the image on the right side of Fig. 1

, if pedestrians are walking on the sidewalk, then an alarm is not necessary. However, traditional pedestrian detection-based PCW systems produce alerts in this situation. It is not trivial to develop a system only using hand-crafted features because it requires several complex steps, including pedestrian detection and scene recognition. In this study, using an end-to-end framework based on a convolutional neural network (CNN), we build a system that solves this problem.

Our contributions in this paper are summarized as follows:

Our network is a combination of two networks, one responsible for prediction and the other for semantic segmentation, as shown in Fig. 2. The prediction network determines whether the input image shows a warning situation, which is a binary classification problem. The semantic segmentation network segments the input image and extracts useful semantic information to feed into prediction network. These two networks are simultaneously trained by minimizing the loss function as follows:

where Lt, Lc, and Le are the total, cross-entropy, and Euclidean loss functions, respectively. λ is a tuning parameter, which we set to 10−3 in order to adjust the scale between the two loss values. The cross-entropy loss Lc is defined as follows:

where B is the total number of data samples in a batch. tij is the j-th value of the ground truth label for the i-th data sample of the current training batch, and o(p)ij is the j-th softmax output value of the prediction network for the i-th data sample. C is the total number of classes; in this case, C=2. This loss function helps the network to predict the situation correctly. The Euclidean loss function Le for the semantic segmentation network is defined as follows:

These two networks share their two low level layers, CONV1 and CONV2, as shown in Fig. 2

. This design is efficient, since these lower layers produce common features such as edges or blobs, allowing us to reduce the total number of learnable parameters. The output of the two networks is integrated at the FC2 layer. The high level features of FC1 and FC3 are concatenated, and the features are used as an input to the FC2 layer. Unlike the features extracted by FC1, the features extracted by FC3 represent semantic features of the input image. The semantic features can detect and classify objects implicitly, so we expect that the semantic features will be helpful for inferring dangerous situations. We do not use the output extracted by the FC4 layer because the dimensionality of FC4 features is too large: 2048 for FC3 compared to 131,072 for FC4. This huge number of dimensions requires many weight connections at the FC2 layer that can cause over-fitting.

The detailed parameter settings for our network, which is similar to AlexNet [2], are as follows: The input image size is 512×256

The size of mini-batch is of 128, and the value of learning rate is of 0.001. Further, we set the value of weight decay to 0.0001, and the total iteration number is of 2000. For the weight initialization of whole weight layers, we used the method as described in [5].

We use a cityscape dataset taken from urban environments to evaluate our method [3]. The dataset includes various objects, such as vehicles, pedestrians, and cyclists. Furthermore, each image is densely or sparsely annotated for semantic segmentation tasks. In our experiments, we use densely annotated data consisting of 2975 training images and 1525 test images. Unfortunately, the dataset does not provide the ground truth data for PCW, so we have annotated each image manually (0: no alarm, 1: warning).

4.3 Comparison to an HoG-based PCW System

We built a baseline algorithm, shown in Fig. 3, that includes an HoG-based pedestrian detection method, for comparison with our method [1]. The rule for making a determination about the danger of a situation was: If pedestrians exist in a dangerous region, determined manually by setting a region of interest from (128, 0) to (383, 255) in the input image, then a warning alarm should be provided to the driver. (The size of the input image is 512×256.). This assumption is natural since sidewalk regions can be significantly reduced in these images.

Fig. 5 shows qualitative results extracted from our proposed PCW system with a semantic segmentation network. Surprisingly, our system was aware of both pedestrians and cyclists. Additionally, our system did not raise an alarm when there was no risk of collision with pedestrians or cyclists. This is a significant benefit of the use of our PCW system.

We have proposed an end-to-end PCW system based on a CNN. The usefulness of traditional systems, based on pedestrian detection, is limited by their false alarm rate. Our system, however, is effective in reducing false alarms and improves system accuracy. Our model combines two networks that individually perform prediction and semantic segmentation tasks, and it was helpful in improving our proposed PCW system. One of the main contributions of this paper is a demonstration of the feasibility of an end-to-end PCW system. Our system could potentially be improved by replacing the deep neural network architecture to a more recent architecture, for example, a deep residual network [6]. Additionally, we believe that our proposed framework can be applied to other ADAS, such as LDW and FCW systems.

This work was supported by the DGIST R&D Program of the Ministry of Science of Korea (16-FA-07).