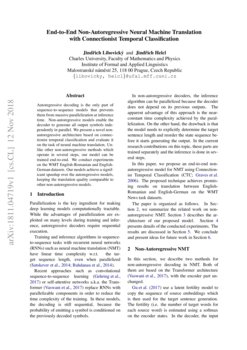 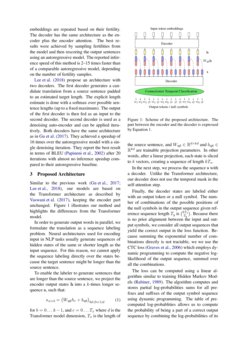 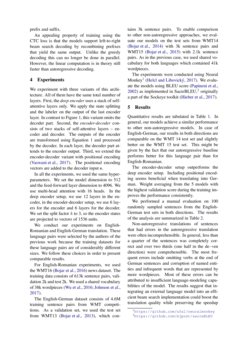 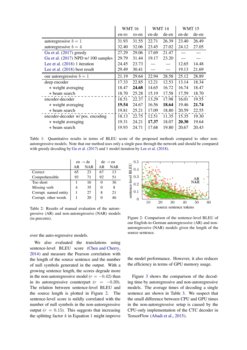 Parallelization is the key ingredient for making deep learning models computationally tractable. While the advantages of parallelization are exploited on many levels during training and inference, autoregressive decoders require sequential execution.

Training and inference algorithms in sequence-to-sequence tasks with recurrent neural networks (RNNs) such as neural machine translation (NMT) have linear time complexity w.r.t. the target sequence length, even when parallelized

replace RNNs with parallelizable components in order to reduce the time complexity of the training. In these models, the decoding is still sequential, because the probability of emitting a symbol is conditioned on the previously decoded symbols.

In non-autoregressive decoders, the inference algorithm can be parallelized because the decoder does not depend on its previous outputs. The apparent advantage of this approach is the near-constant time complexity achieved by the parallelization. On the other hand, the drawback is that the model needs to explicitly determine the target sentence length and reorder the state sequence before it starts generating the output. In the current research contributions on this topic, these parts are trained separately and the inference is done in several steps.

The paper is organized as follows. In Section 2, we summarize the related work on non-autoregressive NMT. Section 3 describes the architecture of our proposed model. Section 4 presents details of the conducted experiments. The results are discussed in Section 5. We conclude and present ideas for future work in Section 6.

In this section, we describe two methods for non-autoregressive decoding in NMT. Both of them are based on the Transformer architecture (Vaswani et al., 2017), with the encoder part unchanged.

use a latent fertility model to copy the sequence of source embeddings which is then used for the target sentence generation. The fertility (i.e. the number of target words for each source word) is estimated using a softmax on the encoder states. In the decoder, the input embeddings are repeated based on their fertility. The decoder has the same architecture as the encoder plus the encoder attention. The best results were achieved by sampling fertilities from the model and then rescoring the output sentences using an autoregressive model. The reported inference speed of this method is 2–15 times faster than of a comparable autoregressive model, depending on the number of fertility samples.

propose an architecture with two decoders. The first decoder generates a candidate translation from a source sentence padded to an estimated target length. The explicit length estimate is done with a softmax over possible sentence lengths (up to a fixed maximum). The output of the first decoder is then fed as an input to the second decoder. The second decoder is used as a denoising auto-encoder and can be applied iteratively. Both decoders have the same architecture as in

Gu et al. (2017). They achieved a speedup of 16 times over the autoregressive model with a single denoising iteration. They report the best result in terms of BLEU (Papineni et al., 2002) after 20 iterations with almost no inference speedup compared to their autoregressive baseline.

Similar to the previous work (Gu et al., 2017; Lee et al., 2018), our models are based on the Transformer architecture as described by Vaswani et al. (2017), keeping the encoder part unchanged. Figure 1 illustrates our method and highlights the differences from the Transformer model.

In order to generate output words in parallel, we formulate the translation as a sequence labeling problem. Neural architectures used for encoding input in NLP tasks usually generate sequences of hidden states of the same or shorter length as the input sequence. For this reason, we cannot apply the sequence labeling directly over the states because the target sentence might be longer than the source sentence.

To enable the labeler to generate sentences that are longer than the source sentence, we project the encoder output states h into a k-times longer sequence s, such that:

for b=0…k−1, and c=0…Tx where d is the Transformer model dimension, Tx is the length of the source sentence, and Wspl∈Rd×kd and bspl∈Rkd are trainable projection parameters. In other words, after a linear projection, each state is sliced to kvectors, creating a sequence of length kTx.

In the next step, we process the sequence s with a decoder. Unlike the Transformer architecture, our decoder does not use the temporal mask in the self-attention step.

Finally, the decoder states are labeled either with an output token or a null symbol. The number of combinations of the possible positions of the null symbols in the output sequence given reference sequence length Ty is (kTxTy)

. Because there is no prior alignment between the input and output symbols, we consider all output sequences that yield the correct output in the loss function. Because summing the exponential number of combinations directly is not tractable, we we use the CTC loss

(Graves et al., 2006) which employs dynamic programming to compute the negative log-likelihood of the output sequence, summed over all the combinations.

(Rabiner, 1989). The algorithm computes and stores partial log-probabilities sums for all prefixes and suffixes of the output symbol sequence using dynamic programming. The table of pre-computed log-probablities allows us to compute the probability of being a part of a correct output sequence by combining the log-probabilities of its prefix and suffix.

An appealing property of training using the CTC loss is that the models support left-to-right beam search decoding by recombining prefixes that yield the same output. Unlike the greedy decoding this can no longer be done in parallel. However, the linear computation is in theory still faster than autoregressive decoding.

We experiment with three variants of this architecture. All of them have the same total number of layers. First, the deep encoder uses a stack of self-attentive layers only. We apply the state splitting and the labeler on the output of the last encoder layer. In contrast to Figure 1, this variant omits the decoder part. Second, the encoder-decoder consists of two stacks of self-attentive layers – encoder and decoder. The outputs of the encoder are transformed using Equation 1 and processed by the decoder. In each layer, the decoder part attends to the encoder output. Third, we extend the encoder-decoder variant with positional encoding (Vaswani et al., 2017). The positional encoding vectors are added to the decoder input s.

We conduct our experiments on English-Romanian and English-German translation. These language pairs were selected by the authors of the previous work because the training datasets for these language pairs are of considerably different sizes. We follow these choices in order to present comparable results.

Quantitative results are tabulated in Table 1. In general, our models achieve a similar performance to other non-autoregressive models. In case of English-German, our results in both directions are comparable on the WMT 14 test set and slightly better on the WMT 15 test set. This might be given by the fact that our autoregressive baseline performs better for this language pair than for English-Romanian.

The encoder-decoder setup outperforms the deep encoder setup. Including positional encoding seems beneficial when translating into German. Weight averaging from the 5 models with the highest validation score during the training improves the performance consistently.

We performed a manual evaluation on 100 randomly sampled sentences from the English-German test sets in both directions. The results of the analysis are summarized in Table 2.

Non-autoregressive translations of sentences that had errors in the autoregressive translation were often incomprehensible. In general, less than a quarter of the sentences was completely correct and over two thirds (one half in the de→en direction) were comprehensible. The most frequent errors include omitting verbs at the end of German sentences and corruption of named entities and infrequent words that are represented by more wordpieces. Most of these errors can be attributed to insufficient language-modeling capabilities of the model. The results suggest that integrating an external language model into an efficient beam search implementation could boost the translation quality while preserving the speedup over the auto-regressive models.

We also evaluated the translations using sentence-level BLEU score (Chen and Cherry, 2014) and measure the Pearson correlation with the length of the source sentence and the number of null symbols generated in the output. With a growing sentence length, the scores degrade more in the non-autoregressive model (r=−0.42) than in its autoregressive counterpart (r=−0.39). The relation between sentence-level BLEU and the source length is plotted in Figure 2. The sentence-level score is mildly correlated with the number of null symbols in the non-autoregressive output (r=0.15). This suggests that increasing the splitting factor k in Equation 1 might improve the model performance. However, it also reduces the efficiency in terms of GPU memory usage.

Figure 3 shows the comparison of the decoding time by autoregressive and non-autoregressive models. The average times of decoding a single sentence are shown in Table 3

. We suspect that the small difference between CPU and GPU times in the non-autoregressive setup is caused by the CPU-only implementation of the CTC decoder in TensorFlow

In this work, we presented a novel method for training a non-autoregressive model end-to-end using connectionist temporal classification. We evaluated the proposed method on neural machine translation in two language pairs and compared the results to the previous work.

In general, the results match the translation quality of equivalent variants of the models presented in the previous work. The BLEU score is usually around 80–90% of the score of the autoregressive baselines. We measured a 4-times speedup compared to our autoregressive baseline, which is a smaller gain than reported by the authors of the previous work. We suspect this might be due to a larger overhead with data loading and processing in Neural Monkey compared to Tensor2Tensor (Vaswani et al., 2018) used by others.

As a future work, we can try to improve the performance of the model by iterative denoising as done by Lee et al. (2018) while keeping the non-autoregressive nature of the decoder.

Another direction of improving the model might be efficient implementation of beam search which can contain rescoring using an external language model as often done in speech recognition (Graves et al., 2013). The non-autoregressive model would play a role a of the translation model in the traditional statistical MT problem decomposition.