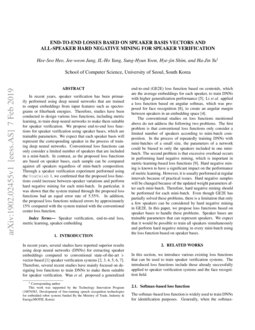 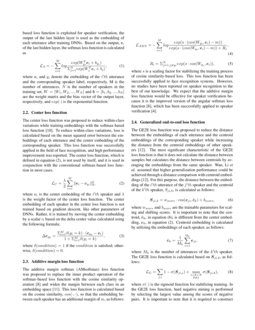 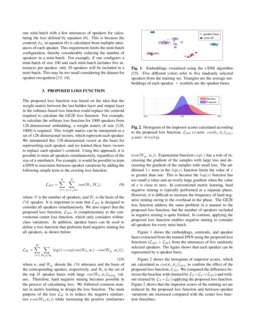 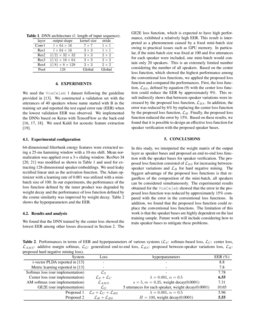 Can we integrate spatial verification methods into neural-network loss functions for atmospheric science?

In the last decade, much work in atmospheric science has focused on spat...
Ryan Lagerquist, et al. ∙

applied a loss function based on angular softmax, which was proposed for face recognition

where ei and yi denote the embedding of the i′th utterance and the corresponding speaker label, respectively, M is the number of utterances, N is the number of speakers in the training set, W=[W1,W2,...,WN] and b=[b1,b2,...,bN]

are the weight matrix and the bias vector of the output layer, respectively, and

exp(⋅) is the exponential function.

[8] and widen the margin between each class in an embedding space [11]. This loss function is calculated based on the cosine similarity, cos(⋅,⋅), so that the embedding between each speaker has an additional margin of m, as follows:

where s is a scaling factor for stabilizing the training process of cosine similarity-based loss. This loss function has been successfully applied to face recognition systems. However, no studies have been reported on speaker recognition to the best of our knowledge. We expect that the additive margin loss function would be effective for speaker verification because it is the improved version of the angular softmax loss function [8], which has been successfully applied to speaker verification [4].

where wscore and bscore are the trainable parameters for scaling and shifting scores. It is important to note that the centroid, ^ck, in equation (6), is different from the center embedding, ck, in equation (2). Centroid embedding is calculated by utilizing the embeddings of each speaker, as follows:

where Mk is the number of utterances of the k′th speaker. The GE2E loss function is calculated based on Sji,k, as follows:

is the sigmoid function for stabilizing training. In the GE2E loss function, hard negative mining is performed by selecting the largest value among the scores of negative pairs. It is important to note that it is required to construct one mini-batch with a few utterances of speakers for calculating the loss defined by equation (6). This is because the centroid,

^ck, in equation (6) is calculated from multiple utterances of each speaker. This requirement limits the mini-batch configuration, thereby considerably reducing the number of speakers in a mini-batch. For example, if one configures a mini-batch of size 100 and each mini-batch includes five utterances per speaker, only 20 speakers will be included in a mini-batch. This may be too small considering the dataset for speaker recognition [13, 14].

where N is the number of speakers, and Wi is the basis of the i′th speaker. It is important to note that LBS is designed to consider all speakers simultaneously. We also expect that the proposed loss function, LBS, is complementary to the conventional center loss function, which only considers within-class variations. In addition, speaker bases can be used to define a loss function that performs hard negative mining for all speakers, as shown below:

where ei and Wyi denote the i′th utterance and the basis of the corresponding speaker, respectively, and Hi is the set of the top H speaker bases with large cos(Wh,ei)|h≠yi values. Therefore, hard negative mining becomes possible in the process of calculating loss. We followed common manner in metric learning to design the loss function. The main purpose of the loss LH is to reduce the negative similarities (cos(Wh,ei)) while increasing the positive similarities (cos(Wyi,ei)). Exponential function exp(⋅) has a role of increasing the gradient of the samples with large loss and decreasing the gradient of the samples with small loss. The additional 1+ term in the log(x) function limits the value of x to greater than one. This is because the log(x) function has too small a value and an overly large gradient when the value of x is close to zero. In conventional metric learning, hard negative mining is typically performed in a separate phase. However, it is difficult to increase the frequency of hard negative mining owing to the overhead in the phase. The GE2E loss function address the same problem in a manner to the proposed loss function, but the number of speakers included in negative mining is quite limited. In contrast, applying the proposed loss function enables negative mining to consider all speakers for every mini-batch.

Figure 1 shows the embeddings, centroids, and speaker bases extracted from the trained DNN using the proposed loss functions (LBS+LH), from the utterances of five randomly selected speakers. The figure shows that each speaker can be represented by a speaker basis.

. We constructed a validation set with the utterances of 40 speakers whose name started with ‘B’ in the training set and reported the test equal error rate (EER) when the lowest validation EER was observed. We implemented the DNNs based on Keras with TensorFlow as the back-end

was modified as shown in Table 1 and used for extracting 128-dimensional speaker embeddings. We used leaky rectified linear unit as the activation function. The Adam optimizer with a learning rate of 0.001 was utilized with a mini-batch size of 100. In our experiments, the performance of the loss function defined by the inner product was degraded by weight decay and the performance of loss function defined by the cosine similarity was improved by weight decay. Table 2 shows the hyperparameters and the EER.