Negative medical findings are prevalent in clinical reports, yet discriminating them from positive findings remains a challenging task for information extraction. Most of the existing systems treat this task as a pipeline of two separate tasks, i.e., named entity recognition (NER) and rule-based negation detection. We consider this as a multi-task problem and present a novel end-to-end neural model to jointly extract entities and negations. We extend a standard hierarchical encoder-decoder NER model and first adopt a shared encoder followed by separate decoders for the two tasks. This architecture performs considerably better than the previous rule-based and machine learning-based systems. To overcome the problem of increased parameter size especially for low-resource settings, we propose the Conditional Softmax Shared Decoder architecture which achieves state-of-art results for NER and negation detection on the 2010 i2b2/VA challenge dataset and a proprietary de-identified clinical dataset. 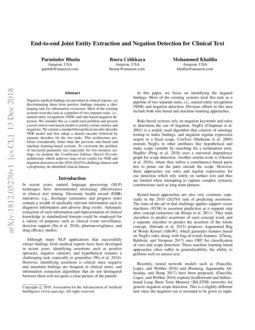 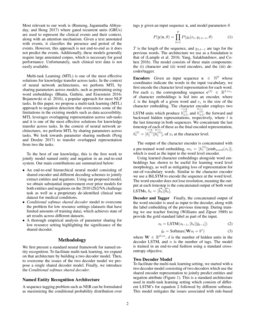 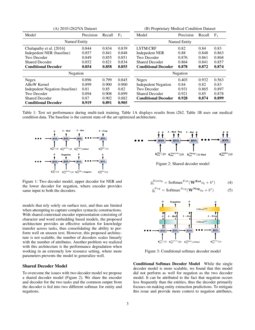 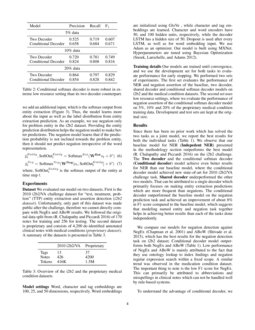 In recent years, natural language processing (NLP) techniques have demonstrated increasing effectiveness in clinical text mining. Electronic health record (EHR) narratives, e.g., discharge summaries and progress notes contain a wealth of medically relevant information such as diagnosis information and adverse drug events. Automatic extraction of such information and representation of clinical knowledge in standardized formats could be employed for a variety of purposes such as clinical event surveillance, decision support

Although many NLP applications that successfully extract findings from medical reports have been developed in recent years, identifying assertions such as positive (present), negative (absent), and hypothetical remains a challenging task, especially to generalize [Wu et al.2014]. However, identifying assertions is critical since negative and uncertain findings are frequent in clinical notes, and information extraction algorithms that do not distinguish between them will not paint a clear picture of the patient.

In this paper, we focus on identifying the negated findings in multi-task setting [Bhatia, Arumae, and Celikkaya2018]. Most of the existing systems treat this task as a pipeline of two separate tasks, i.e., named entity recognition (NER) and negation detection. Previous efforts in this area include both rule-based and machine-learning approaches.

Rule-based systems rely on negation keywords and rules to determine the cue of negation. NegEx [Chapman et al.2001] is a widely used algorithm that consists of ontology lookup to index findings, and negation regular expression search in a fixed scope. ConText [Harkema et al.2009] extends NegEx to other attributes like hypothetical and make scope variable by searching for a termination term. NegBio [Peng et al.2018] uses a universal dependency graph for scope detection. Another similar work is [Gkotsis et al.2016], where they utilize a constituency-based parse tree to prune out the parts outside the scope. However, these approaches use rules and regular expressions for cue detection which rely solely on surface text and thus are limited when attempting to capture complex syntactic constructions such as long noun phrases.

Kernel-based approaches are also very common, especially in the 2010 i2b2/VA task of predicting assertions. The state-of-the-art in that challenge applies support vector machines (SVM) to assertion prediction as a separate step after concept extraction

. They train classifiers to predict assertions of each concept word, and a separate classifier to predict the assertion of the whole concept.

[Shivade et al.2015] proposes Augmented Bag of Words Kernel (ABoW), which generates features based on NegEx rules along with bag-of-words features. [Cheng, Baldwin, and Verspoor2017] uses CRF for classification of cues and scope detection. These machine learning based approaches often suffer in generalizability, the ability to perform well on unseen text.

Recently, neural network models such as

exploits feedforward and bidirectional Long Short Term Memory (BiLSTM) networks for generic negation scope detection. This is a slightly different task since the negation cue is assumed to be given as input. Most relevant to our work is

where gated recurrent units (GRUs) are used to represent the clinical events and their context, along with an attention mechanism. Given a text annotated with events, it classifies the presence and period of the events. However, this approach is not end-to-end as it does not predict the events. Additionally, these models generally require large annotated corpus, which is necessary for good performance. Unfortunately, such clinical text data is not easily available.

To the best of our knowledge, this is the first work to jointly model named entity and negation in an end-to-end system. Our main contributions are summarized below:

y given an input sequence x, and model parameters θ.

T is the length of the sequence, and y1:t−1 are tags for the previous words. The architecture we use as a foundation is that of [Lample et al.2016, Yang, Salakhutdinov, and Cohen2016]. The model consists of three main components: the (i) character and (ii) word encoders, and the (iii) decoder/tagger.

Given an input sequence x∈NT whose coordinates indicate the words in the input vocabulary, we first encode the character level representation for each word. For each xt the corresponding sequence c(t)∈RL×ec of character embeddings is fed into an encoder, where L is the length of a given word and ec is the size of the character embedding. The character encoder employs two LSTM units which produce −−→h(t)1:l, and ←−−h(t)1:l

, the forward and backward hidden representations, respectively, where

The output of the character encoder is concatenated with a pre-trained word embedding, mt=[h(t)c||embword(xt)], which is used as the input to the word level encoder.

Using learned character embeddings alongside word embeddings has shown to be useful for learning word level morphology, as well as mitigating loss of representation for out-of-vocabulary words. Similar to the character encoder we use a BiLSTM to encode the sequence at the word level. The word encoder does not lose resolution, meaning the output at each timestep is the concatenated output of both word LSTMs, ht=[→ht||←ht].

Finally, the concatenated output of the word encoder is used as input to the decoder, along with the label embedding of the previous timestep. During training we use teacher forcing [Williams and Zipser1989] to provide the gold standard label as part of the input.

To facilitate the multi-task learning setting, we started with a two decoder model consisting of two decoders which use the shared encoder representation to jointly predict entities and negation attribute (Figure 1). This is a standard architecture used in multi-task learning setting which consists of different LSTM’s for equation 2 followed by different softmax. This model mitigates the issues associated with rule-based models that rely solely on surface text, and thus are limited when attempting to capture complex syntactic constructions. With shared contextual encoder representation consisting of character and word embedding based models, the proposed architecture provides an effective solution for knowledge transfer across tasks, thus consolidating the ability to perform well on unseen text. However, this proposed architecture is not scalable, the number of decoders scales linearly with the number of attributes. Another problem we realized with this architecture is the performance degradation when working in an extremely low resource setting, where more parameters prevents the model to generalize well.

To overcome the issues with two decoder model we propose a shared decoder model (Figure 2). We share the encoder and decoder for the two tasks and the common output from the decoder is fed into two different softmax for entity and negations.

While the single decoder model is more scalable, we found that this model did not perform as well for negation as the two decoder model. It can be attributed to the fact that negation occurs less frequently than the entities, thus the decoder primarily focuses on making entity extraction predictions. To mitigate this issue and provide more context to negation attributes, we add an additional input, which is the softmax output from entity extraction (Figure 3). Thus, the model learns more about the input as well as the label distribution from entity extraction prediction. As an example, we use negation only for problem entity in the i2b2 dataset. Providing the entity prediction distribution helps the negation model to make better predictions. The negation model learns that if the prediction probability is not inclined towards the problem entity, then it should not predict negation irrespective of the word representation.

where, SoftOutEntityt is the softmax output of the entity at time step t.

Dataset We evaluated our model on two datasets. First is the 2010 i2b2/VA challenge dataset for “test, treatment, problem” (TTP) entity extraction and assertion detection (i2b2 dataset). Unfortunately, only part of this dataset was made public after the challenge, therefore we cannot directly compare with NegEx and ABoW results. We followed the original data split from [R. Chalapathy and Piccardi2016] of 170 notes for training and 256 for testing. The second dataset is proprietary and consists of 4,200 de-identified annotated clinical notes with medical conditions (proprietary dataset). A summary of the datasets is presented in Table 3.

Training details Our models are trained until convergence, and we use the development set for both tasks to evaluate performance for early stopping. We performed two sets of experiments. The first set evaluates the performance of NER and negation assertion of the baseline, two decoder, shared decoder and conditional softmax decoder models on i2b2 and the medical condition datasets. The second set uses low resource settings, where we evaluate the performance of negation assertion of the conditional softmax decoder model on 5%, 10% and 20% of the proprietary medical condition training data. Development and test sets are kept at the original size.

Since there has been no prior work which has solved the two tasks as a joint model, we report the best results for both the individual tasks (Table 1). We observe that our baseline model for NER (Indepedent NER) presented in the methodology section outperforms the best model [R. Chalapathy and Piccardi2016] on the i2b2 challenge. The Two decoder and the conditional softmax decoder (Conditional decoder) model achieve even better results for NER than our baseline model, where the conditional decoder model achieved new state-of-art for 2010 i2b2/VA challenge task. Shared decoder underperformed the other two models. That can be attributed to a single decoder which primarily focuses on making entity extraction predictions which are more frequent than negations. The conditional decoder outperformed the baseline model on the negation prediction task and achieved an improvement of about 8% in F1 score compared to the baseline model, which suggests that modeling named entity and negation task together helps in achieving better results than each of the tasks done independently.

We compare our models for negation detection against NegEx [Chapman et al.2001] and ABoW [Shivade et al.2015], which has the best results for the negation detection task on i2b2 dataset. Conditional decoder model outperforms both NegEx and ABoW (Table 1). Low performance of NegEx and ABoW is mainly attributed to the fact that they use ontology lookup to index findings and negation regular expression search within a fixed scope. A similar trend was observed in the medication condition dataset. The important thing to note is the low F1 score for NegEx. This can primarily be attributed to abbreviations and misspellings in clinical notes which can not be handled well by rule-based systems.

In this paper, we have shown that named entity and negation assertion can be modeled in a multi-task setting. Joint learning with sharing of parameters provides better contextual representation and helps in alleviating problems associated with using neural networks for negation detection thereby achieving better results than the rule-based systems. Our proposed conditional softmax decoder achieves best results across both tasks and is robust to work well in extreme low data settings. For future work, we plan to investigate the model on other related tasks such as relation extraction, normalization as well as the use of advanced conditional models.