Event extraction is an important work of medical text processing. According to the complex characteristics of medical text annotation, we use the end-to-end event extraction model to enhance the output formatting information of events. Through pre training and fine-tuning, we can extract the attributes of the four dimensions of medical text: anatomical position, subject word, description word and occurrence state. On the test set, the accuracy rate was 0.4511, the recall rate was 0.3928, and the F1 value was 0.42. The method of this model is simple, and it has won the second place in the task of mining clinical discovery events (task2) in the Chinese electronic medical record of the seventh China health information processing Conference (chip2021). 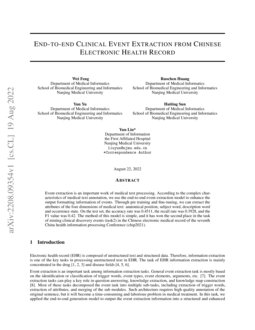 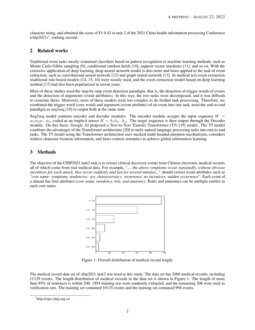 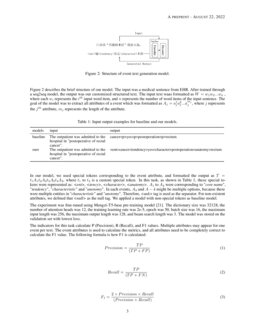 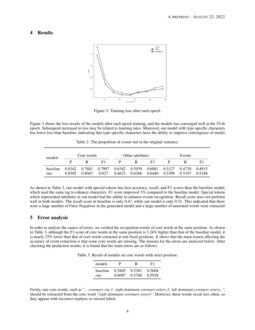 Event extraction is challenging due to the complex structure of event re...
Yaojie Lu, et al. ∙

Event extraction is an important task among information extraction tasks. General event extraction task is mostly based on the identification or classification of trigger words, event types, event elements, arguments, etc. [zhan_survey_2019]. The event extraction tasks can play a key role in question answering, knowledge extraction, and knowledge map construction [berant_modeling_2014]. Most of these tasks decomposed the event task into multiple sub-tasks, including extraction of trigger words, extraction of attributes, and merging of the sub modules. Such architecture requires high quality annotation of the original sentence, but it will become a time-consuming and laborious problem in medical treatment. In this task, we applied the end-to-end generation model to output the event extraction information into a structured and enhanced character string, and obtained the score of F1 0.42 in task 2 of the 2021 China health information processing Conference (chip2021)111http://cips-chip.org.cn, ranking second.

, and so on. With the extensive application of deep learning, deep neural network model is also more and more applied to the task of event extraction, such as convolutional neural network

Most of these studies used the step-by-step event detection paradigm, that is, the detection of trigger words of events and the detection of arguments (event attributes). In this way, the two tasks were decomposed, and it was difficult to correlate them. Moreover, most of these models were too complex to do further task processing. Therefore, we combined the trigger word (core word) and argument (event attribute) of an event into one task, used the end-to-end paradigm as seq2seq [sutskever_sequence_2014] to output both at the same time.

coded as an implicit tensor

H=h1h2...hn. The target sequence is then output through the Decoder module. On this basis, Google AI proposed a Text-to-Text Transfer Transformer (T5) [raffel_exploring_2020] model. The T5 model combines the advantages of the Transformer architecture [vaswani_attention_2017]

The objective of the CHIP2021 task2 task is to extract clinical discovery events from Chinese electronic medical records, all of which come from real medical data. For example, "…, the above symptoms occur repeatedly, without obvious incentives for each attack, they occur suddenly and last for several minutes…" should extract event attributes such as "core name: symptoms, tendencies: yes, characteristics: recurrence, no incentives, sudden occurrence". Each event of a dataset has four attributes (core name, trendency, role, and anatomy). Roles and anatomies can be multiple entities in each core name.

In our model, we used special tokens corresponding to the event attribute, and formatted the output as T=t1A1t2A2t3A3t4A4, where t1 to t4 is a custom special token. In this task, as shown in Table 1, these special tokens were represented as: <ent>, <tency>, <character>, <anatomy>. A1 to A4 were corresponding to "core name", "tendency", "characteristic" and "anotomy". In each events, A3 and A−4 might be multiple options, because there were multiple entities in "characteristic" and "anotomy". Therefore, <unk> tag is used as the separator. For non-existent attributes, we defined that <null> as the null tag. We applied a model with non-special tokens as baseline model.

. The dictionary size was 32128, the number of attention heads was 12, the training learning rate was 2e-5, epoch was 50, batch size was 16, the maximum input length was 256, the maximum output length was 128, and beam search length was 3. The model was stored on the validation set with lowest loss.

The indicators for this task calculate P (Precision), R (Recall), and F1 values. Multiple attributes may appear for one event per text. The event attributes is used to calculate the metrics, and all attributes need to be completely correct to calculate the F1 value. The following formula is how F1 is calculated:

As shown in Table 2, our model with special tokens has best accuracy, recall, and F1 scores than the baseline model, which used the same tag to enhance characters. F1 score improved 3% compared to the baseline model. Special tokens which represented attributes in our model had the ability to enhance events recognition. Recall score does not perform well in both models. The recall score in baseline is only 0.47, while our model is only 0.51. This indicated that there were a large number of False Negatives in the generated model and a large number of unrelated words were extracted.

In order to analyze the causes of errors, we verified the recognition results of core words at the same position. As shown in Table 3, although the F1 score of core words at the same position is 3.24% higher than that of the baseline model, it is nearly 25% lower than that of core words extracted at non fixed positions. It shows that the main reason affecting the accuracy of event extraction is that some core words are missing. The reasons for the errors are analyzed below. After checking the prediction results, it is found that the main errors are as follows.

Thirdly, the influence of the pre-training model, such as "no white pottery stool", should be extracted as "core word: stool, tendency: negative, characteristic: white pottery stool", but this model is extracted as "core word: stool characteristics". Perhaps in the pre-training model, "stool characteristics" is a common word, so when predicting the next word of the word "stool", the "characteristics" is more likely to occur than the special token <trend>. Because "stool" is a common core word in this dataset, this reason has a greater impact on performance.

From the error analysis above, we can see that there are three main reasons for the omission of core words. Possible solutions include: 1. For rare core words, most of them lack professional vocabulary. By adding medical knowledge, it is expected to further increase the probability of specific vocabulary generation. 2. For the situation where the context structure of core words is close to each other, consider the extraction of separated core words and their attributes, and use the extraction of the previous step as the hint of the latter step to improve the difference between them. 3. For the effect of the pre-training model, consider constraining the generation process and strengthening the decoding process of extracting content from the original text, but may result in the loss of custom content, consider adding standardization steps.

In order to extract events from clinical records and their four attributes, in this task, we used a model generation combined with enhanced structured output to enhance event attributes with special tokens. Because our method is simple and does not require text labeling, it has great potential.