Machine learning approaches to auditory object recognition are traditionally based on engineered features such as those derived from the spectrum or cepstrum. More recently, end-to-end classification systems in image and auditory recognition systems have been developed to learn features jointly with classification and result in improved classification accuracy. In this paper, we propose a novel end-to-end deep neural network to map the raw waveform inputs to sound class labels. Our network includes an "inception nucleus" that optimizes the size of convolutional filters on the fly that results in reducing engineering efforts dramatically. Classification results compared favorably against current state-of-the-art approaches, besting them by 10.4 percentage points on the Urbansound8k dataset. Analyses of learned representations revealed that filters in the earlier hidden layers learned wavelet-like transforms to extract features that were informative for classification. 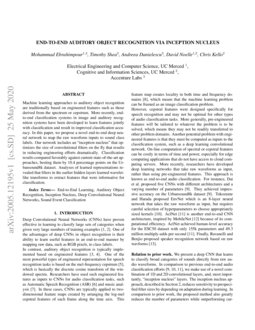 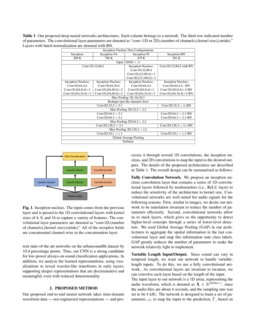 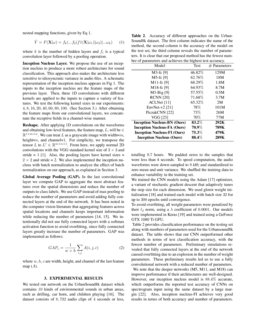 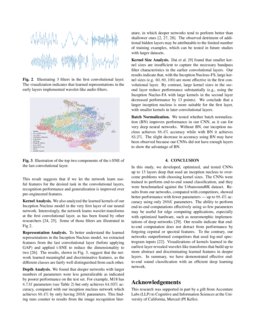 We study the touchscreen data as behavioural biometrics. The goal was to...
Michał Krzemiński, et al. ∙

We train a bank of complex filters that operates on the raw waveform and...
Neil Zeghidour, et al. ∙

, which is basically the discrete cosine transform of the windowed spectra. Researchers have used such engineered features as inputs to CNNs for audio classification tasks, such as Automatic Speech Recognition (ASR)

. In these cases, CNNs are typically applied to two-dimensional feature maps created by arranging the log-mel cepstral features of each frame along the time axis. This feature map creates locality in both time and frequency domains

[1], which means that the machine learning problem can be framed as an image classification problem.

However, cepstral features were designed specifically for speech recognition and may not be optimal for other types of audio classification tasks. More generally, pre-engineered features will be tailored to whatever the problem is to be solved, which means they may not be readily transferred to other problem domains. Another potential problem with engineered features is that they must be computed as inputs to the classification system, such as a deep learning convolutional network. On-line computation of spectral or cepstral features can be costly in terms of time and power, especially for edge computing applications that do not have access to cloud computing servers.

More recently, researchers have developed deep learning networks that take raw waveforms as input, rather than using pre-engineered features. This approach is known as end-to-end audio classification. For instance, Dai et al. proposed five CNNs with different architectures and a varying number of parameters [6]. They achieved impressive accuracy on the Urbansound8k dataset [6]

. Tokozume and Harada proposed EnvNet which is an 8-layer neural network that takes the raw waveform as input, but requires careful selection of hyperparameters to choose appropriately sized kernels

[25]. AclNet [13] is another end-to-end CNN architecture, inspired by MobileNet [10] because of its computational efficiency. AclNet achieved human-level accuracy for the ESC50 dataset with only 155k parameters and 49.3 million multiply-adds per second [13]. Finally, Ravanelli and Benjio proposed speaker recognition network based on raw wavforms [19].

Relation to prior work. We present a deep CNN that learns to classify broad categories of sounds directly from raw audio waveforms. In comparison to previous end-to-end audio classification efforts [6, 25, 13], we make use of a novel combination of 1D and 2D convolutional layers, and, most importantly, “inception nucleus” layers. The inception nucleus approach, described in Section 2, reduces sensitivity to prespecified filter sizes by depending on adaptation during learning. In comparison to prior work, the proposed method also greatly reduces the number of parameters while outperforming current state-of-the-art networks on the urbansound8k dataset by 10.4 percentage points. Thus, our CNN is a strong candidate for low-power always-on sound classification applications. In addition, we analyze the learned representations, using visualizations to reveal wavelet-like transforms in early layers, supporting deeper representations that are discriminative and meaningful, even with reduced dimensionality.

Our proposed end-to-end neural network takes time-domain waveform data — not engineered representations — and processes it through several 1D convolutions, the inception nucleus, and 2D convolutions to map the input to the desired outputs. The details of the proposed architectures are described in Table 1. The overall design can be summarized as follows:

We propose an inception nucleus convolution layer that contains a series of 1D convolutional layers followed by nonlinearities (i.e., ReLU layer) to reduce the sensitivity of the architecture to kernel size. Convolutional networks are well-suited for audio signals for the following reasons. First, similar to images, we desire our network to be translation invariant to reduce the number of parameters efficiently. Second, convolutional networks allow us to stack layers, which gives us the opportunity to detect higher-level concepts through a series of lower-level detectors. We used Global Average Pooling (GAP) in our architectures to aggregate the spatial information in the last convolutional layer and map this information onto class labels. GAP greatly reduces the number of parameters to make the network relatively light to implement.

Variable Length Input/Output. Since sound can vary in temporal length, we want our network to handle variable-length inputs. To do this, we use a fully convolutional network. As convolutional layers are invariant to location, we can convolve each layer based on the length of the input. The input layer to our network is a 1D array, representing the audio waveform, which is denoted as X∈R32000×1, since the audio files are about 4 seconds, and the sampling rate was set to be 8 \it kHz. The network is designed to learn a set of parameters, ω, to map the input to the prediction, ^Y, based on nested mapping functions, given by Eq 1.

where k is the number of hidden layers and fi is a typical convolution layer followed by a pooling operation.

1. The inputs to the inception nucleus are the feature maps of the previous layer. Then, three 1D convolutions with different kernels are applied to the inputs to capture a variety of features. We test the following kernel sizes in our experiments: 4,8,16,20,40,60,80,100. (See Section 3.) After obtaining the feature maps from our convolutional layers, we concatenate the receptive fields in a channel-wise manner.

Reshape. After applying 1D convolutions on the waveforms and obtaining low-level features, the feature map, L, will be ∈R1×m×n. We can treat L as a grayscale image with width=m, height=n, and channel=1

. For simplicity, we transpose the tensor

where w,h,c are width, height, and channel of the last feature map (A).

We tested our network on the UrbanSound8k dataset which contains 10 kinds of environmental sounds in urban areas, such as drilling, car horn, and children playing [21]. The dataset consists of 8,732 audio clips of 4 seconds or less, totalling 9.7

hours. We padded zeros to the samples that were less than 4 seconds. To speed computation, the audio waveforms were down-sampled to

8 \it kHz and standardized to zero mean and unit variance. We shuffled the training data to enhance variability in the training set. We trained the CNN models using the Adam [14]

optimizer, a variant of stochastic gradient descent that adaptively tunes the step size for each dimension. We used glorot weight initialization

[8] and trained each model with batch size 32 for up to 300epochs until convergence. To avoid overfitting, all weight parameters were penalized by their ℓ2 norm, using a λ coefficient of 0.0001

. Our models were implemented in Keras

We note that the deeper networks (M5, M11, and M18) can improve performance if their architectures are well-designed. However, our inception nucleus model is 88.4% accurate, which outperforms the reported test accuracy of CNNs on spectrogram input using the same dataset by a large margin [17]. Also, inception nucleus-FI achieves very good results in terms of both accuracy and number of parameters. This result suggests that if we let the network learn useful features for the desired task in the convolutional layers, recognition performance and generalization is improved over pre-engineered features.

Kernel Analysis. We also analyzed the learned kernels of our Inception Nucleus model in the very first layer of our neural network. Interestingly, the network learns wavelet transforms at the first convolutional layer, as has been found by other researchers [2, 27]. Some of those filters are illustrated in Fig 2.

Representation Analysis. To better understand the learned representations in the Inception Nucleus model, we extracted features from the last convolutional layer (before applying GAP) and applied t-SNE to reduce the dimensionality to two [15]. The results, shown in Fig. 3, suggest that the network learned meaningful and discriminative features, as the different classes are fairly well distinguished from each other.

Depth Analysis. We found that deeper networks with larger numbers of parameters were less generalizable as indicated by poorer performance on the test set. For example, M18 has 8.7M parameters (see Table 2) but only achieves 64.93% accuracy, compared with our inception nucleus network which achieves 88.4% by only having 289K parameters. This finding runs counter to results from the image recognition literature, in which deeper networks tend to perform better than shallower ones [9, 12, 11]. The observed detriment of additional hidden layers may be attributable to the limited number of training examples, which can be tested in future studies with larger datasets.

Batch Normalization. We tested whether batch normalization (BN) improves performance in our CNN, as it can for very deep neural networks. Without BN, our inception nucleus achieves 88.4% accuracy while with BN it achieves 83.2%. The slight decrease in accuracy using BN may have been observed because our CNNs did not have enough layers to show the advantage of BN.

In this study, we developed, optimized, and tested CNNs up to 13 layers deep that used an inception nucleus to overcome problems with choosing kernel sizes. The CNNs were trained to perform end-to-end sound classification, and they were benchmarked against the Urbansound8K dataset. Results from our networks, compared with competitors, showed better performance with fewer parameters — up to 88.4% accuracy using only 289K parameters. The ability to perform end-to-end computations effectively using so few parameters may be useful for edge computing applications, especially with optimized hardware, such as neuromorphic implementations of deep networks [3]. Our results indicate that end-to-end computation does not detract from performance by forgoing cepstral or spectral features. To the contrary, our networks outperformed competitors that used log-mel spectrogram inputs [17]. Visualizations of kernels learned in the earliest layer revealed wavelet-like transforms that build up to more abstract and discriminating learned features in deeper layers. In summary, we have demonstrated effective end-to-end sound classification with an efficient deep learning network.

This research was supported in part by a gift from Accenture Labs (LLP) to Cognitive and Information Sciences at the University of California, Merced (PI Kello).