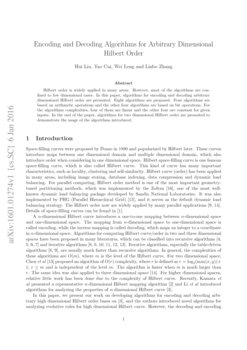 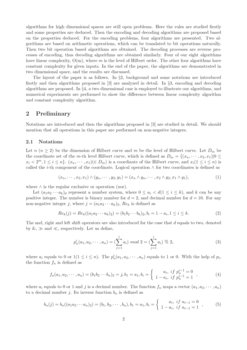 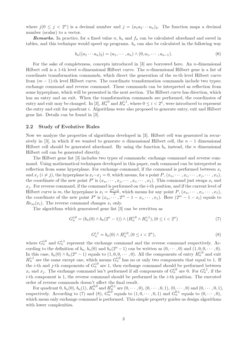 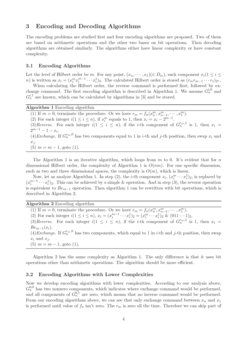 In the first part we have shown that, for L_2-approximation of functions...
David Krieg, et al. ∙

On the Arithmetic Complexities of Hamming Codes and Hadamard Codes

In this paper, we study the arithmetic complexities of Hamming codes and...
Zhengrui Li, et al. ∙

A Hilbert Scheme in Computer Vision

This paper is to analyze the approximation solution of a split variation...
Zheng Zhou, et al. ∙

Space-filling curves were proposed by Peano in 1890 and popularized by Hilbert later. These curves introduce maps between one dimensional domain and multiple dimensional domain, which also introduce order when considering in one dimensional space. Hilbert space-filling curve is one famous space-filling curve, which is also called Hilbert curve. This kind of curve has many important characteristics, such as locality, clustering and self-similarity. Hilbert curve (order) has been applied in many areas, including image storing, database indexing, data compression and dynamic load balancing. For parallel computing, Hilbert order method is one of the most important geometry-based partitioning methods, which was implemented by the Zoltan [16], one of the most well-known dynamic load balancing package developed by Sandia National Laboratories. It was also implemented by PHG (Parallel Hierarchical Grid) [15], and it serves as the default dynamic load balancing strategy. The Hilbert order now are widely applied by many parallel applications [9, 14]. Details of space-filling curves can be found in [1].

-dimensional space. Algorithms for computing Hilbert curve/order in two and three dimensional spaces have been proposed in many literatures, which can be classified into recursive algorithms

The layout of the paper is as follows. In §2, background and some notations are introduced firstly and then algorithms proposed in [3] are analyzed in detail. In §3, encoding and decoding algorithms are proposed. In §4, a two dimensional case is employed to illustrate our algorithms, and numerical experiments are performed to show the difference between linear complexity algorithm and constant complexity algorithm.

Notations are introduced and then the algorithms proposed in [3] are studied in detail. We should mention that all operations in this paper are performed on non-negative integers.

where ∧ is the regular exclusive or operation (xor).

Let (a1a2⋯ak)d represent a number system, where 0≤ai<d(1≤i≤k), and k can be any positive integer. The number is binary number for d=2, and decimal number for d=10. For any non-negative integer j, where j=(a1a2⋯ak)2, Rek is defined as

The and, right and left shift operators are also introduced for the case that d equals to two, denoted by &, ≫ and ≪, respectively. Let us define,

where ai equals to 0 or 1 and j is a decimal number. The function fn

(a1,a2,⋯,an) to a decimal number j. Its inverse function bn is defined as

Remarks. In practice, for a fixed value n, bn and fn can be calculated aforehand and saved in tables, and this technique would speed up programs. bn can also be calculated in the following way

-th level Hilbert curve. The coordinate transformation commands include two types: exchange command and reverse command. These commands can be interpreted as reflection from some hyperplane, which will be presented in the next section. The Hilbert curve has direction, which has an entry and an exit. When the transformation commands are performed, the coordinates of entry and exit may be changed. In

[3], Hi,0n and Hi,1n, where 0≤i<2n, were introduced to represent the entry and exit for quadrant i. Algorithms were also proposed to generate entry, exit and Hilbert gene list. Details can be found in [3].

The Hilbert gene list [3] includes two types of commands: exchange command and reverse command. Using mathematical techniques developed in this paper, each command can be interpreted as reflection from some hyperplane. For exchange command, if the command is performed between xi and xj (i≠j), the hyperplane is xi−xj=0, which means, for a point P, (xn,⋯,xi,⋯,xj,⋯,x1), the coordinate of the new point P′ is (xn,⋯,xj,⋯,xi,⋯,x1). This command just swaps xi and xj. For reverse command, if the command is performed on the i-th position, and if the current level of Hilbert curve is m, the hyperplane is xi=2m−12, which means for any point P, (xn,⋯,xi,⋯,x1), the coordinate of the new point P′ is (xn,⋯,2m−1−xi,⋯,x1). Here (2m−1−xi) equals to Rem(xi). The reverse command changes xi only.

The algorithms which generateed gene list [3] can be rewritten as

When calculating the Hilbert order, the reverse command is performed first, followed by exchange command. The first encoding algorithm is described in Algorithm 1. We assume Gi,0n and Gi,1n are known, which can be calculated by algorithms in [3] and be stored.

Now, let us analyze Algorithm 1. In step (2), the i-th component xi, (xmi⋯x1i)2, is replaced by (xm−1i⋯x1i)2. This can be achieved by a simple & operation. And in step (3), the reverse operation is equivalent to Rem−1 operation. Then algorithm 1 can be rewritten with bit operations, which is described in Algorithm 2.

Algorithm 2 has the same complexity as Algorithm 1. The only difference is that it uses bit operations other than arithmetic operations. The algorithm should be more efficient.

Now we develop encoding algorithms with lower complexities. According to our analysis above, G0,0n has two nonzero components, which indicates where exchange command would be performed, and all components of G0,1n are zero, which means that no inverse command would be performed. From our encoding algorithms above, we can see that only exchange command between xn and x1 is performed until value of fn isn’t zero. The rm is zero all the time. Therefore we can skip part of the loop. This property shows us opportunity to reduce the number of iterations. Assume log2(0) equals to 0, we define k=floor(log2(max{xn,⋯,x1}))+1. Then the two encoding algorithms above are rewritten to Algorithm 3 and Algorithm 4 respectively.

Again algorithm 3 is based on arithmetic operations and Algorithm 4 is based on bit operations, which terminate in k steps, thus the complexities of them are O(nk). For any given point P, the k is fixed, therefore, the number of iterations of the latter two algorithms are independent of the level of Hilbert curve. For any specific dimension, the complexity is constant. We can see that they are more efficient than the former two when level m is much larger than k.

Algorithm 5 and Algorithm 6 terminate in m steps and it’s evident that their complexities are O(nm). For any specific dimension n, the complexity is linear.

We introduce the definition of k here, which means rk>0 and ri=0(i>k). It is the location that the first ri is not zero. We also assume k equals to 1 if z equals to 0. It’s equivalent to k=floor(log2n((rm⋯r1)2n))+1 if we assume log2n(0) equals to 0. k isn’t greater than m and is independent of m. Now we can rewrite Algorithm 5 and Algorithm 6 with lower complexities.

Algorithm 7 and Algorithm 8 terminate in k steps and therefore the complexities are O(nk). For any fixed input and any specific dimension, the complexity is constant.

Encoding and decoding algorithms above are concise and easy to implement. In this section, a two dimensional example is employed to illustrate how to use these algorithms. For the sake of simpleness, only Algorithm 1 is studied.

When n equals to two, the functions b2 and f2 are calculated and stored in Table 1. Exchange command Gi,02 and reverse command Gi,12 are listed in Table 2, hich are obtained using algorithms introduced in [3].

Checking Algorithm 1, we can see what steps (2) ∼ (4) do is to update coordinate (xn,⋯,x1) only. The reason we describe the process by using three steps is to make the process clear. In practice, these three steps can be combined together and we use one step to update directly. The updating rules for encoding procedure are shown in Table 3, where (x2,x1) is replaced by (x,y).

The updating rules can be obtained easily using our algorithm. Take i equals to 3 as an example. In this case, G3,02 is (1,1), and G3,12 is (1, 1). According to our analysis, an exchange operation and two reverse operations should be performed. The new coordinate (xnew,ynew) is (x−2m−1,y) after step (2). It is (2m−1−x,2m−1−1−y) after reverse operation. Then we perform the exchange command, the final coordinate is (2m−1−1−y,2m−1−x), which is the same as shown in Table 3. Updating rules for decoding algorithm can be obtained similarly.

In [13], Chen et al. developed a reduced complexity algorithm for two dimensional case and numerical results were also presented. We implement the three dimensional case in PHG [15, 14], which is an essential module for dynamic load balancing. The Hilbert order algorithms were also implemented in Zoltan [16]. The performance data is collected in Table 4. The first row represents the level of Hilbert order, and others represent running time. ¿From this table, we can see that for a fixed coordinate (1, 1, 1), the computational time increases linearly for algorithm with the O(m) complexity while it’s fixed for algorithm with O(k) complexity.