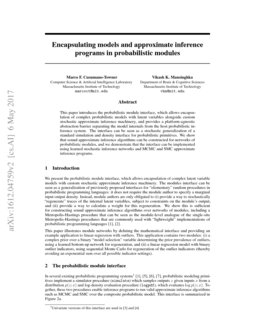 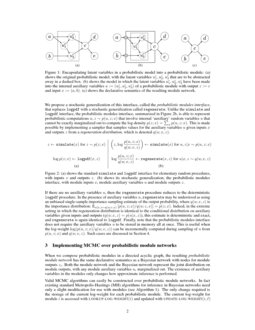 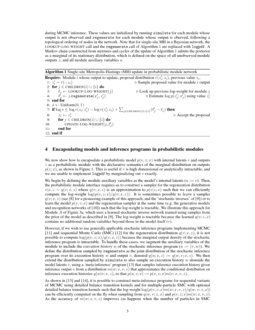 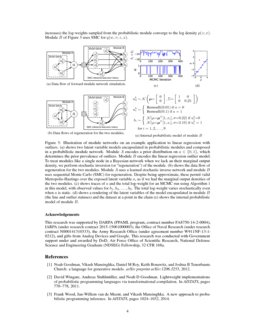 We introduce the notion of a stochastic probabilistic program and presen...
David Tolpin, et al. ∙

There has been a great deal of recent interest in methods for performing...
Prithviraj Sen, et al. ∙

The interface for functions in the dune-functions module

We present the probabilistic module interface, which allows encapsulation of complex latent variable models with custom stochastic approximate inference machinery. The modules interface can be seen as a generalization of previously proposed interfaces for “elementary” random procedures in probabilistic programming languages: it does not require the module author to specify a marginal input-output density. Instead, module authors are only obligated to (i) provide a way to stochastically “regenerate” traces of the internal latent variables, subject to constraints on the module’s output, and (ii) provide a way to calculate a weight for this regeneration. We show this is sufficient for constructing sound approximate inference algorithms over networks of modules, including a Metropolis-Hastings procedure that can be seen as the module-level analogue of the single-site Metropolis-Hastings procedures that are commonly used with “lightweight” implementations of probabilistic programming languages goodman2012church , wingate2011lightweight .

This paper illustrates module networks by defining the mathematical interface and providing an example application to linear regression with outliers. This application contains two modules: (i) a complex prior over a binary “model selection” variable determining the prior prevalence of outliers, using a learned bottom-up network for regeneration, and (ii) a linear regression model with binary outlier indicators, using sequential Monte Carlo for regeneration of the outlier indicators (thereby avoiding an exponential sum over all possible indicator settings).

In several existing probabilistic programming systems111Univariate versions of this interface are used in wood2014new and dippl goodman2012church , mansinghka2014venture , mansinghka2015bayesdb , saad2016probabilistic , probabilistic modeling primitives implement a simulator procedure (simulate) which samples outputs z given inputs x from a distribution p(z;x) and log-density evaluation procedure (logpdf), which evaluates logp(z;x). Together, these two procedures enable inference programs to run valid approximate inference algorithms such as MCMC and SMC over the composite probabilistic model. This interface is summarized in Figure 2a.

u that cannot be exactly marginalized out to compute the log-density p(z;x)=∑up(u,z;x). This is made possible by implementing a sampler that samples values for the auxiliary variables u given inputs x and outputs z from a regeneration distribution, which is denoted q(u;x,z).

may be understood as using an unbiased single-sample importance sampling estimate of the output probability, where

q(u;x,z) is the importance distribution: Eu|x,z∼q(u;z,x)[p(u,z;x)/q(u;z,x)]=p(z;x). Indeed, in the extreme setting in which the regeneration distribution is identical to the conditional distribution on auxiliary variables given inputs and outputs (q(u;x,z)=p(u|x,z)), this estimate is deterministic and exact, and regenerate is again identical to logpdf. Finally, note that the probabilistic modules interface does not require the auxiliary variables u to be stored in memory all at once. This is useful when the log-weight log(p(u,z;x)/q(u;x,z)) can be incrementally computed during sampling of u from p(u,z;x) and q(u;x,z). Such cases are discussed in Section 4.

. Both the module network and the Bayesian network represent the joint distribution on module outputs, with any module auxiliary variables

ui marginalized out. The existence of auxiliary variables in the modules only changes how approximate inference is performed.

Valid MCMC algorithms can easily be constructed over probabilistic module networks. In fact existing standard Metropolis-Hastings (MH) algorithms for inference in Bayesian networks need only a slight modification for use with modules (see Algorithm 1). The only change required is the storage of the current log-weight for each probabilistic module. The current log-weight for module i is accessed with lookup-log-weight(i) and updated with update-log-weight(i,ℓ) during MCMC inference. These values are initialized by running simulate for each module whose output is not observed and regenerate for each module whose output is oberved, following a topological ordering of nodes in the network. Note that for single-site MH in a Bayesian network, the lookup-log-weight call and the regenerate call of Algorithm 1 are replaced with logpdf

. A Markov chain constructed from mixtures and cycles of the update of Algorithm

1 admits the posterior as a marginal of its stationary distribution, which is defined on the space of all unobserved module outputs z, and all module auxiliary variables u.

We now show how to encapsulate a probabilistic model p(v,z;x) with internal latents v and outputs z as a probabilistic module with the declarative semantics of the marginal distribution on outputs p(z;x), as shown in Figure 1. This is useful if v is high dimensional or analytically intractable, and we are unable to implement logpdf by marginalizing out v exactly.

We begin by defining the module auxiliary variables as the model’s internal latents (u:=v). Then, the probabilistic module interface requires us to construct a sampler for the regeneration distribution v|x,z∼q(v;x,z) where q(v;x,z) is an approximation to p(v|z;x) such that we can efficiently compute the log-weight log(p(v,z;x)/q(v;x,z)). It is sometimes possible to learn a sampler q(v;x,z) (see morris2001recognition for a pioneering example of this approach, and the ‘stochastic inverses’ of stuhlmuller2013learning ) or to learn the model p(v,z;x) and the regeneration sampler at the same time (e.g. the generative models and recognition networks of kingma2013auto ) such that the log-weight is tractable. We illustrate this approach for Module A of Figure 2a, which uses a learned stochastic inverse network trained using samples from the prior of the model as described in stuhlmuller2013learning . The log-weight is tractable because the learned q(v;z,x) contains no additional random variables beyond those in the model itself (v).

As shown in cusumano2016quantifying and cusumanotowner2016smc , it is possible to construct meta-inference programs for sequential variants of MCMC using detailed balance transition kernels and for multiple-particle SMC with optional detailed balance transition kernels such that the log-weight log(p(v,z;x)m(w;x,v,z)/q(w,v;z,x)) can be efficiently computed on the fly when sampling from q(w,v;z,x) and p(v,z;x)m(w;x,v,z). As the accuracy of m(w;x,v,z) improves (as happens when the number of particles in SMC increases) the log-weights sampled from the probabilistic module converge to the log density p(z;x). Module B of Figure 3 uses SMC for q(w,v;z,x).

This research was supported by DARPA (PPAML program, contract number FA8750-14-2-0004), IARPA (under research contract 2015-15061000003), the Office of Naval Research (under research contract N000141310333), the Army Research Office (under agreement number W911NF-13-1-0212), and gifts from Analog Devices and Google. This research was conducted with Government support under and awarded by DoD, Air Force Office of Scientific Research, National Defense Science and Engineering Graduate (NDSEG) Fellowship, 32 CFR 168a.

Consider a network of probabilistic modules indexed by V={1,…,N}. Let ui denote the internal auxiliary variables or module i, let zi denote the output of module i, and let xi denote the inputs to module i. Each module input xi is a tuple of module outpus zj for j∈πi, where πi is the sequence of parent module indices of module i. Let ci denote the set of children of module i: (ci={j∈V:i∈πj}). Let pi(ui,zi;xi) denote the simulation distribution for module i and let q(ui;xi,zi) denote the regeneration distribution. Define the collection of all module auxiliary variables by u=(u1,…,uN) and the collection of all module outputs by z=(z1,…,zN). Define the joint simulation distribution over the network as p(u,z):=∏i∈Vpi(ui,zi;xi). The declarative semantics of the module network are derived from the marginal distribution over outputs p(z):=∑up(u,z). Suppose a subset of the modules O⊊V are observed, meaning their output is constrained to a value zi. The target distribution of the network is then defined by p((zj)j∉O|(zi)i∈O). We will derive a Metropolis-Hastings algorithm for which the stationary distribution is the distribution p(u,(zj)j∉O|(zi)i∈O). If the algorithm converges to this joint distribution, then the marginal over only (zj)j∉O converges to the network’s target distribution.

Consider a standard single-site Metropolis-Hastings update targeting the distribution p(u,(zj)j∉O|(zi)i∈O) where we propose a new value for the output of some module i∉O. Let u:=(u1,…,uN) and z:=(z1,…,zN) denote the state prior to the update. We propose a new value z′i∼r(⋅;zi), and then propose u′i|z′i∼qi(⋅;xi,z′i). We also propose uj|z′i∼qj(⋅;x′j,zj) for all modules j∈ci, where x′j includes the updated value z′i. We perform an MH accept/reject step using this proposal, and with the ‘local’ posterior p(ui,zi,(uj)j∈ci|xi,(xj)j∈ci,(zj)j∈ci) as the target distribution. The acceptance ratio is:

This is the acceptance ratio used in Algorithm 1. Therefore Algorithm 1 corresponds to a valid MH update that can be used to compose valid MH algorithms that converge to the posterior p(u,(zj)j∉O|(zi)i∈O), such as a single-site random-scan mixture over Algorithm 1 applications for all unobserved modules i∉O.