We consider Empirical Bayes (EB) estimation in the normal means problem, when the standard deviations of the observations are not known precisely, but estimated with error -- which is almost always the case in practical applications. In classical statistics accounting for estimated standard errors usually involves replacing a normal distribution with a t distribution. This suggests approaching this problem by replacing the normal assumption with a t assumption, leading to an "EB t-means problem". Here we show that an approach along these lines can indeed work, but only with some care. Indeed, a naive application of this idea is flawed, and can perform poorly. We suggest how this flaw can be remedied by a two-stage procedure, which first performs EB shrinkage estimation of the standard errors and then solves an EB t-means problem. We give numerical results illustrating the effectiveness of this remedy. 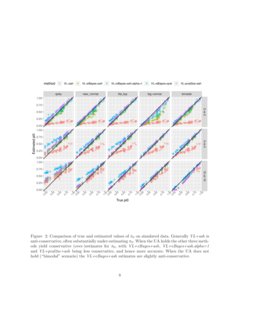 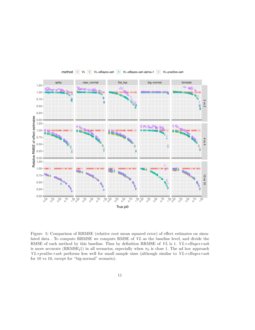 The shrinkage estimation has proven to be very useful when dealing with ...
Yeil Kwon, et al. ∙

ebnm: An R Package for Solving the Empirical Bayes Normal Means Problem Using a Variety of Prior Families

The simultaneous estimation of many parameters η_i, based on a correspon...
Luella J. Fu, et al. ∙

On Estimating Many Means, Selection Bias, and the Bootstrap

We consider Empirical Bayes (EB) estimation in applications where we have observed estimates ^βj (j=1,…,p) of a series of underlying “effects” βj, with estimated standard errors ^sj. Our goal is to perform EB estimation for the effects β1,…,βp, from the observations ^β1,…,^βp, under standard normal theory assumptions, but taking account of uncertainty in the standard errors.

If the standard errors of ^β1,…,^βp were known, rather than estimated, our problem would simply involve EB inference for the well-studied “Normal means” problem (e.g. Johnstone and Silverman, 2004):

where sj denotes the “true” standard error of ^βj, and G is some specified family of distributions. (The conditioning on sj in (2) makes explicit an assumption that the βj are independent and identically distributed from gβ, independent of sj, an assumption we relax later.) Fitting this EB model involves first obtaining an estimate ^gβ for gβ (e.g. by marginal maximum likelihood), and then computing the posterior distributions p(βj|^βj,sj,^gβ). These posterior distributions can be used to obtain both point and interval estimates of βj. And, if the family G involves sparse distributions (with a point mass on 0), then the posterior distributions can also be used to compute (local) false discovery rates (Efron, 2004), effectively providing an EB solution to the “multiple testing” problem. This EB normal means problem is well studied, and there exist flexible software implementations for solving it for a range of choices of G (e.g. Stephens, 2016). For example, methods in Stephens (2016) effectively solve this problem for G

the set of all unimodal distributions (by exploiting the fact that any such distribution can be approximated, to arbitrary accuracy, by a mixture of sufficiently many uniform distributions).

In classical statistics, the fact that standard errors are estimated is usually dealt with by replacing normal distributions with t distributions. Indeed, in the settings we consider here, we have

where tν denotes the t distribution on νdegrees of freedom. Expression (4

) is routinely used in classical statistics to obtain confidence intervals for

From this it is tempting to replace the EB normal means problem (1)-(2) with what we call the “EB t-means problem” (EBTM):

where tν(μ,σ) denotes the generalized t distribution on ν degrees of freedom, with mean μ and scale parameter σ (i.e. the distribution of μ+σT when T∼tν). While this EBTM problem is much less studied than the EB normal means problem, Stephens (2016) also provides flexible software implementations solving the EBTM problem – estimating g and computing posterior distributions p(βj|^βj,^sj,^g) – for a range of choices of G.

Unfortunately, there is a problem with this tempting naive approach: while the EBTM problem (5)-(6) is well-defined and solvable, the standard theory that leads to (4) does not imply (5). The reason is that in (4) ^sj is random, and not conditioned on, and the unconditional expression does not imply a corresponding conditional one:

In this paper we describe a simple solution to this problem. Our solution involves EB analysis of the standard errors ^sj (Smyth, 2004), which is already widely used in genomics applications – indeed, currently much more widely used than EB analysis of the effect estimates ^βj. Our approach effectively combines the methods from Smyth (2004) with the methods for the EBTM problem from Stephens (2016). We demonstrate empirically that, in contrast with the naive approach, this combined approach can provide reliable inference.

and its standard error in a simple linear regression,

yj=xβj+ej, where yj and x are observed n

-vectors and the residual errors

) with an assumption that the true variances

come from an inverse-gamma distribution, which can be written:

(using a method of moments), and then bases inferences for

s2j on its posterior distribution given these estimates, which is also an inverse-gamma distribution. Indeed, given s0 and ν0, the posterior can be written

The key to our approach is the following simple Lemma.

Thus, although (5) does not hold in general, under the assumptions (8)-(11) (which imply (12)) an analogous expression (15) does hold. This analogous expression simply involves replacing the original standard errors and degrees of freedom with their moderated values, (13) and (14). Combining (15) with (6) then yields an EBTM problem that can be solved using methods from Stephens (2016).

Putting this all together, we suggest the following two-step strategy for fitting the EBNM model, accounting for uncertainty in estimated standard errors:

Equation (6) assumes that the βj are independent of ^sj. Methods in Stephens (2016) for the EBTM problem can deal with the more general assumption:

Although values of α other than 0 and 1 do not have a straightforward motivation or interpretation, it is straightforward to fit these models, and to estimate α by comparing likelihoods if desired.

2.3 An ad hoc strategy that avoids the EBTM problem

The framework outlined above has the advantage of being based on clear statistical principles. However, it has the disadvantage that the EBTM problem is often more complex to solve than the EBNM problem. In our numerical studies below we therefore also consider an alternative ad hoc strategy, which avoids solving the EBTM problem.

This ad hoc strategy starts by using the same ideas as above to obtain the estimates ^βj, moderated standard errors ~sj and degrees of freedom ~νj. However, rather than applying the EBTM methods to these data, we convert the problem into a “normal means” problem, by changing the standard errors. Specifically for each j we define the “adjusted standard error” s′j

to be the value for which the z-score

^βj/s′j results in the same p-value (when compared with a standard normal distribution) as from the moderated t test (comparing ^βj/~sj with a t distribution on ~νj degrees of freedom).111The following R function computes the adjusted standard error from an effect estimate bhat and corresponding p value p: pval2se = function(bhat,p){z = qnorm(1-p/2); s = abs(bhat/z); return(s)} . We then use ^βj,s′j as the inputs to an EBNM problem to obtain posterior distributions and shrinkage estimates for βj.

We illustrate our two-stage strategy, and compare it with the naive strategy, the ad hoc

strategy, and other related methods, using simulations. To make our simulated standard errors and test statistics realistic, we base our simulations on real data from an RNA sequencing experiment (RNA-seq data). However, unlike real RNA-seq data, our simulations create data that are independent across genes. In practice RNA-seq data are often strongly correlated among genes, and these correlations can cause severe complications for many analyses methods

(Efron, 2010; Gerard and Stephens, 2018). By removing these correlations here we are comparing methods under idealized conditions, and seek to show that even under idealized conditions the naive approach – which does not use EB shrinkage of the standard errors – performs poorly. For empirical comparisons of methods on correlated RNA-seq data see Gerard and Stephens (2018); Lu (2018).

We analyzed each simulated dataset with several methods based on the voom-limma (VL) pipeline (Law et al., 2014), which uses the voom and lmFit functions from the limma R package (Ritchie et al., 2015) to obtain estimates ^β and standard errors ^s, along with degrees of freedom ν. Many of the pipelines also use the eBayes function to obtain moderated standard errors ~s and moderated degrees of freedom ~ν, which yield moderated t statistics and corresponding p values.

Figure 2 compares the estimated π0 with the true π0 in our simulations. The first key observation is that the naive approach voom+ash can dramatically underestimate π0, and cannot be recommended. All other approaches generally provide reasonable (conservative) estimates of π0, with the ash-based approaches producing more accurate (less conservative) estimates than those from qvalue. This improved accuracy comes from the additional assumption made by the EB approach in ash, that the effects are unimodal (Stephens, 2016). The results are reasonably robust to this assumption, but estimates of π0 can be anti-conservative in the bimodal scenario (just as in Stephens (2016)).

Assessment of FDR control and power

Figures 3 assesses how well each method controls FDR in our simulations (at nominal level 0.05), and Figure 4 shows the corresponding power (proportion of true effects declared significant). The naive method completely fails to control FDR for very small sample sizes (2 vs 2 or 4 vs 4). Other methods perform generally well at controlling FDR, although there is some lack of FDR control of ash-based methods in the bimodal scenario. The ash-based methods are slightly more powerful than qvalue because of the less conservative estimates of π0.

The results (Figure 5) demonstrate the expected benefits of shrinkage estimation: the shrunken estimates from VL+eBayes+ash (whether α=0 or 1) are consistently better than the original unshrunk estimates. The improvement on the baseline RMSE is up to 90% in settings where most effects are null, where the benefits of shrinkage are strongest.

used simulations to show that, under idealized conditions (with known standard errors), these interval estimates not only have good coverage properties on average, but also “post-selection”: that is, even if we focus only on significant effects, the coverage of the EB credible intervals is good. This property is difficult to obtain in other ways.

in (b), where coverage rates are often much lower than the nominal 95%. This says that the method is “over-shrinking” the significant effects towards zero in this case, probably due to underestimating the length of the tail of the effects. In low-signal situations some level of over-shrinkage may be inevitable if we want to maintain conservative behaviour (i.e avoid under-shrinkage); thus it is unclear to what extent this behavior could be improved on.

Our numerical results also show that a simpler ad hoc approach, VL+pval2se+ash in the Figures, which avoids solving the more complex EBTM problem by instead adjusting the standard errors and solving an EBNM problem, can work adequately to control false discovery rates. However, it performs less well in estimation accuracy than the more principled approaches based on solving the EBTM problem.

The above simulation scheme, which we developed during our work on this project, was used by Gerard and Stephens (2018) to generate realistic simulated RNA-seq datasets with a desired effect distributions, while still preserving most of the structure (correlation, magnitude, etc) of the actual RNA-seq data. Unfortunately correlations among genes create substantial complications for many analysis methods (Leek and Storey, 2007), including ours; see Gerard and Stephens (2018) for extensive discussion and further references. To avoid these complications here we modify this scheme to remove correlations between genes. Specifically we modify step 2 to randomly select the nA and nB samples for groups A and B independently at each gene. This modification ensures that the simulated null data at each gene are independent.

While this modification makes the simulations unrepresentative of typical RNA-seq experiments (since real data are typically correlated across genes), it allows us to study the behaviour of methods under idealized situations, which is helpful for understanding the main conceptual contribution of our work here. Results of our methods on the more realistic simulations with correlations intact are given in Lu (2018).