Multiple organ failure (MOF) is a life-threatening condition. Due to its urgency and high mortality rate, early detection is critical for clinicians to provide appropriate treatment. In this paper, we perform quantitative analysis on early MOF prediction with comprehensive machine learning (ML) configurations, including data preprocessing (missing value treatment, label balancing, feature scaling), feature selection, classifier choice, and hyperparameter tuning. Results show that classifier choice impacts both the performance improvement and variation most among all the configurations. In general, complex classifiers including ensemble methods can provide better performance than simple classifiers. However, blindly pursuing complex classifiers is unwise as it also brings the risk of greater performance variation. 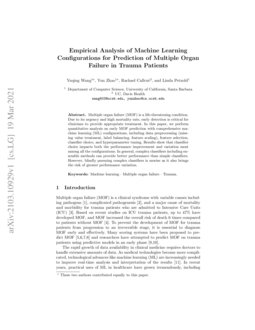 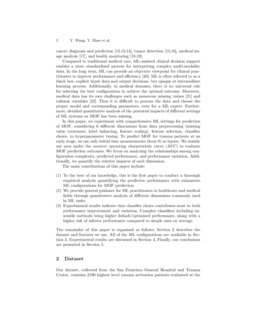 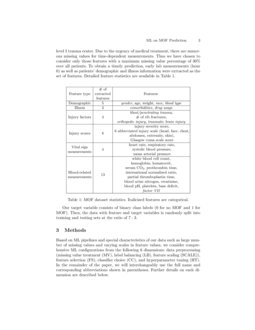 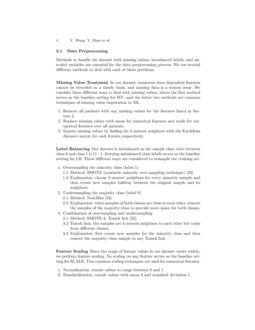 Multiple organ failure (MOF) is a clinical syndrome with variable causes including pathogens [1], complicated pathogenesis [2], and a major cause of mortality and morbidity for trauma patients who are admitted to Intensive Care Units (ICU) [3]. Based on recent studies on ICU trauma patients, up to 47% have developed MOF, and MOF increased the overall risk of death 6 times compared to patients without MOF [4]. To prevent the development of MOF for trauma patients from progression to an irreversible stage, it is essential to diagnose MOF early and effectively. Many scoring systems have been proposed to predict MOF [5, 6, 7, 8] and researchers have attempted to predict MOF on trauma patients using predictive models in an early phase [9, 10].

Compared to traditional medical care, ML-assisted clinical decision support enables a more standardized process for interpreting complex multi-modality data. In the long term, ML can provide an objective viewpoint for clinical practitioners to improve performance and efficiency [20]. ML is often referred to as a black box: explicit input data and output decisions, but opaque at intermediate learning process. Additionally, in medical domains, there is no universal rule for selecting the best configuration to achieve the optimal outcome. Moreover, medical data has its own challenges such as numerous missing values [21] and colinear variables [22]. Thus it is difficult to process the data and choose the proper model and corresponding parameters, even for a ML expert. Furthermore, detailed quantitative analysis of the potential impacts of different settings of ML systems on MOF has been missing.

In this paper, we experiment with comprehensive ML settings for prediction of MOF, considering 6 different dimensions from data preprocessing (missing value treatment, label balancing, feature scaling), feature selection, classifier choice, to hyperparameter tuning. To predict MOF for trauma patients at an early stage, we use only initial time measurements (hour 0

) as inputs. We mainly use area under the receiver operating characteristic curve (AUC) to evaluate MOF prediction outcomes. We focus on analyzing the relationships among configuration complexity, predicted performance, and performance variation. Additionally, we quantify the relative impacts of each dimension.

The main contributions of this paper include:

The remainder of this paper is organized as follows. Section 2 describes the dataset and features we use. All of the ML configurations are available in Section 3. Experimental results are discussed in Section 4. Finally, our conclusions are presented in Section 5.

Our dataset, collected from the San Francisco General Hospital and Trauma Center, contains 2190 highest level trauma activation patients evaluated at the level I trauma center. Due to the urgency of medical treatment, there are numerous missing values for time-dependent measurements. Thus we have chosen to consider only those features with a maximum missing value percentage of 30% over all patients. To obtain a timely prediction, early lab measurements (hour 0) as well as patients’ demographic and illness information were extracted as the set of features. Detailed feature statistics are available in Table 1.

Our target variable consists of binary class labels (0 for no MOF and 1 for MOF). Then, the data with feature and target variables is randomly split into training and testing sets at the ratio of 7:3.

Based on ML pipelines and special characteristics of our data such as large number of missing values and varying scales in feature values, we consider comprehensive ML configurations from the following 6 dimensions: data preprocessing (missing value treatment (MV), label balancing (LB), feature scaling (SCALE)), feature selection (FS), classifier choice (CC), and hyperparameter tuning (HT). In the remainder of the paper, we will interchangeably use the full name and corresponding abbreviations shown in parentheses. Further details on each dimension are described below.

Methods to handle the dataset with missing values, imbalanced labels, and unscaled variables are essential for the data preprocessing process. We use several different methods to deal with each of these problems.

In our dataset, numerous time-dependent features cannot be recorded on a timely basis, and missing data is a serious issue. We consider three different ways to deal with missing values, where the first method serves as the baseline setting for MV, and the latter two methods are common techniques of missing value imputation in ML.

Our dataset is imbalanced as the sample class ratio between class 0 and class 1 is 11:1. Keeping imbalanced class labels serves as the baseline setting for LB. Three different ways are considered to resample the training set.

Since the range of feature values in our dataset varies widely, we perform feature scaling. No scaling on any feature serves as the baseline setting for SCALE. Two common scaling techniques are used for numerical features.

In medical datasets, there usually exist many highly correlated features, and some features that are weakly correlated to the target [22, 26]. Thus it is essential to identify the most relevant features that may help to improve the outcome of the analysis. Using all of the features described in Section 2 serves as the baseline setting for FS. We consider two main feature selection techniques: filter and wrapper methods.

We experimented with 15 classifiers on the dataset. In general, these classifiers can be divided into two main categories: single and ensemble. Lists of all classifiers are available in Table 2

. For ensemble classifiers (combination of individual classifiers), we tried bagging (BAG, RF, ET), boosting (GB, ABC, XGB, LGBM), voting (VOTE) and stacking (STACK). In bagging, DT is a homogeneous weak learner. Multiple DTs learn the dataset independently from each other in parallel and the final outcome is obtained by averaging the results of each DT. In boosting, DT also serves as a homogeneous weak learner. However, DTs learn the dataset sequentially in an adaptive way (new learner depends on previous learners’ success), and the final outcome is determined by weighted sum of previous learners. In voting, heterogeneous base estimators (LR, RF, SVM, MLP, ET) are considered, where each estimator learns the original dataset and the final prediction is determined by majority voting. In stacking, several heterogeneous base learners (RF, KNN, SVM) learn the dataset in parallel, and there exists a meta learner (LR) that combines the predictions of the weak learners. Abbreviations of classifiers shown in parentheses for voting and stacking are the ones we use.

We formulated MOF prediction as a binary classification task. All of the experiments in this paper were implemented using scikit-learn [27]. As mentioned in Section 2, our training and testing dataset is randomly split with a ratio of 7:3

. One-hot encoding is applied to all categorical features. For each classifier, we use the same training and testing dataset. We use AUC as our main performance metric, as it is commonly used for MOF prediction in the literature

. It provides a “summary” of classifier performance compared to single metrics such as precision and recall. AUC represents the probability that a classifier ranks a randomly chosen positive sample (class

1) higher than a randomly chosen negative sample (class 0), and thus useful for imbalanced datasets. In this section, we quantify the impacts (improvement and variation) of each dimension on the predicted performance over our testing dataset.

For HT, MV, LB, SCALE, and FS, we define the baseline as default hyperparameter choices, using no missing value imputation, no label balancing, no feature scaling, and no feature selection, respectively. For CC, we choose SVM, which achieves the median score among all classifiers, as the baseline. Then we quantify the performance improvement of each dimension. Fig. 1 shows the percentage that each dimension contributes to the improvement in the AUC score over baseline by tuning only one dimension at a time while leaving others at baseline settings. We observe that CC contributes most to the performance improvement (15.00%) for MOF prediction. After CC, LB (10.81%), FS (10.09%), MV (7.90%), HT (6.94%), and FS (2.45%) bring decreasing degrees of performance improvement in the AUC score.

Table 4 shows the improvement of every single dimension on each classifier over the baseline. In general, MV and LB tend to provide the greatest performance improvement for most classifiers. For RF, ET, and LGBM, FS contributes the most to improvement in performance since these classifiers require feature importance ranking intrinsically, and external FS improves their prediction outcomes to a large extent. Note that the classifier for which SCALE has the largest impact is KNN, as it is a distance-based classifier which is sensitive to the range of feature values. Also, due to instability and tendency to overfit, HT is the most critical for DT improvement.

In addition to AUC, 6 other performance metrics are used to measure the performance improvement degree of each dimension. The results in Table 5 reveal that CC brings the greatest improvement regardless of the metrics we use. Contributions from HT and SCALE are relatively small compared to other dimensions.

In addition to AUC, 6 other performance metrics are used to evaluate the performance of all classifiers. We use the median score to rank classifiers with both default and optimized settings. Then, NDCG (normalized discounted cumulative gain), one of the most prevalent measures of ranking quality [30], is used to compare classifier rankings between each of these metrics and the AUC score. Detailed relevance scores are shown in Table 8. The result indicates that the median performance of each classifier is similar no matter which metric is used. This also suggests that the AUC score can represent classifiers’ overall performance well.

Based on the above experiments, ensemble classifiers should be prioritized in MOF prediction since they usually bring better predictive performance than single classifiers.

In addition to AUC, the same metrics as above were used to validate the performance variation of all of the classifiers. We use the range (difference between maximum and minimum scores) to rank classifiers in consideration of MV, LB, SCALE, FS, and HT. Then, NDCG is used to compare classifier rankings between each of these metrics and the AUC score. Table 9 displays detailed relevance scores. The result suggests that other metrics show a similar ‘U-shaped’ relationship between classifier complexity and performance variation as the AUC score. When predicting MOF, it is inappropriate for clinical practitioners to choose ‘too simple’ and ‘too complex’ classifiers since they may run the risk of underfitting and overfitting, respectively.

We have provided a timely MOF prediction using early lab measurements (hour 0), patients’ demographic and illness information. Our study quantitatively analyzes the performance via the AUC score in consideration of a wide range of ML configurations for MOF prediction, with a focus on the correlations among configuration complexity, predicted performance, and performance variation. Our results indicate that choosing the correct classifier is the most crucial step that has the largest impact (performance and variation) on the outcome. More complex classifiers including ensemble methods can provide better default/optimized performance, but may also lead to larger performance degradation, without careful selection. Clearly, more MOF data is needed to provide a more general conclusion. Our work can potentially serve as a practical guide for ML practitioners whenever they conduct data analysis in healthcare and medical fields.

This work was funded by the National Institutes for Health (NIH) grant NIH R01 - HL149670.